Who wants a Hug? A Tour of the Cholla Garden (and other Sonoran Pricklies) 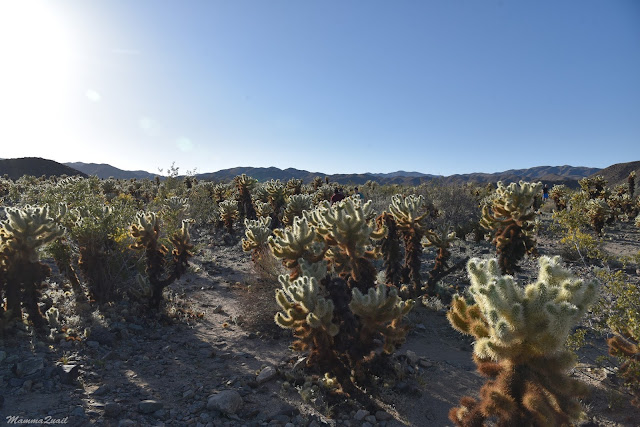 There was still plenty of daylight left when we finished our little hike at Barker Dam, so we turned the car south and drove to Cottonwood Spring. Our plan was to hike a bit over there and then check out the Cholla Garden on our way back north to Twentynine Palms. In one of the yards in town there I saw an ocotillo in full bloom and I was all jazzed up about seeing the ocotillo blooming in their natural place.
We didn't cover much distance before I pulled over to admire a large lupine shrub in full bloom by the roadside.

After a long linger at the Cottonwood Spring visitor center we drove to the trailhead and headed down to the oasis.
A small group of fan palms marked the presence of water. It is a short distance from the parking lot.
I wanted to hike the Mastodon loop trail but only the younger chika wanted to come along, so I set out on the trail with her and left the rest to rest in the shade of the palms at the oasis.
On our way we run into by now old acquaintances - the caterpillars of the sphinx moth. There were many of them, and they came in all sizes, and ate pretty much everything plant.
The first part of the Mastodon loop overlaps with the trail to the Lost Palms Oasis, which I first hiked with Pappa Quail over 13 years ago.
4 years ago I hiked it a second time with my friend Anenet. We were out to look for the big desert bloom I had promised her. That year however, the bloom was very weak and disappointing. That trail was at the end of our big desert road trip, and it was only there that we finally got a nice taste of what the desert has to offer.
But although it was the best display we've seen that year it was nothing compared to what unraveled before us now.
There was colorful bloom everywhere. Every plant, be it a shrub or an annual herb, was putting forth its best and most spectacular show, and the overall effect was absolutely stunning.
While many of them I have already seen earlier that day, I also found there species that were new to me.
Nearly all of them had not been blooming on my previous visit there. Some of them were quite challenging to photograph.
Others didn't look like much, but I was photographing everything with exaggerated enthusiasm, and later I found out that some of these are really unique plants.
We were about half a mile into the trail and still swooning from the superbly display when Pappa Quail caught up with us, sweating and out of breath. He had run all the way to inform me that I misread the map and that the Mastodon Loop was 3.5 miles long and not 1.5 as I thought. Oops ... if we want to see the ocotillo and the Cholla Garden we had to turn back and drive north now, otherwise we would not get there in daylight.

We hurried back to the parking lot. Papa Quail took the young chika's hand and sped up with her while I took it a bit slower to leave.
But Pappa Quail did stop a couple of times on his way back, on on one of his stops he caught this lovely lizard on camera.
We drove back north and stopped at the roadside where we had seen the ocotillo blooming on our way south. They really cannot be missed: they are just about the weirdest looking plants in that part of the desert.


And when the ocotillo blooms it looks like flaming red candles, standing out brightly against the desert backdrop. 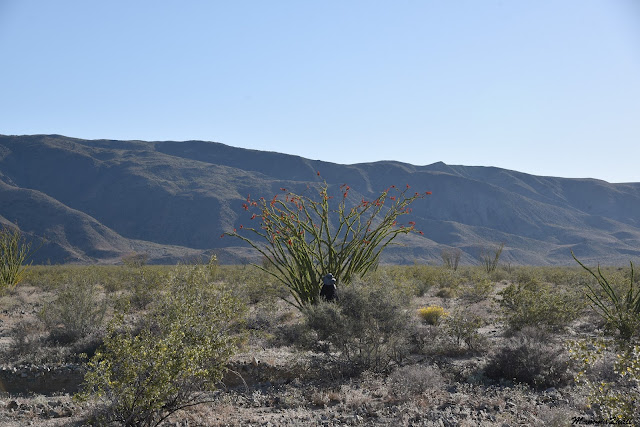 And we also got to see the pollinators in action: sphinx moths that was fluttering about in a low-pitch buzz, looking almost like hummingbirds.
Only a bit more north there is the Cholla Garden, and there we went next.
The Cholla Garden is a dense field of a cactus called teddybear cholla. And they do look very cute, almost inviting a hug.
Almost. 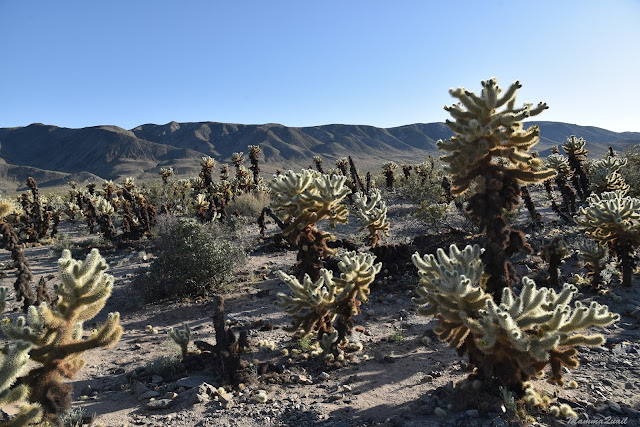 There is a short and easy loop trail in the field and although the chikas complained (they said they had had enough hiking for that day), be managed to get them out of the car and onto the trail.

They cholla were magnificent. And their bloom was in its beginning, far from peaking yet. 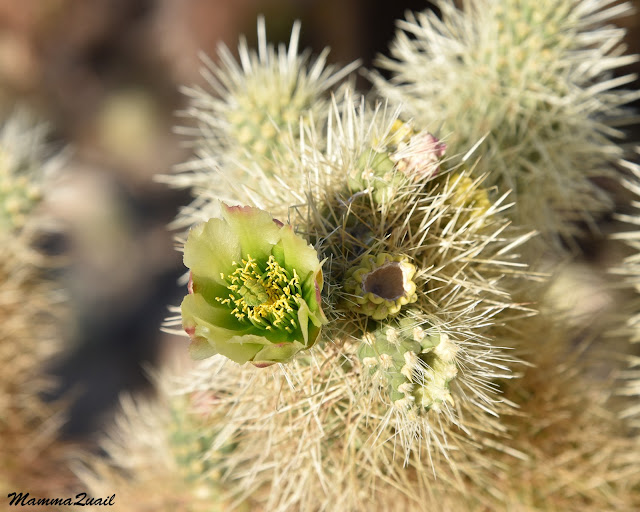 It was obvious that the cholla field had sustained damage due to the long drought years, but they seemed to be on the mend  when we were there.
And while the cholla was the dominant species at the garden, there were other plants there too.
Some were really small,
and others really weird.
The ground was littered with segments of cholla that had fallen off the bigger plants. I believe this is one way that the cholla reproduce - when a detached segment set roots in the ground where it had rolled to after detaching from the mother plant. 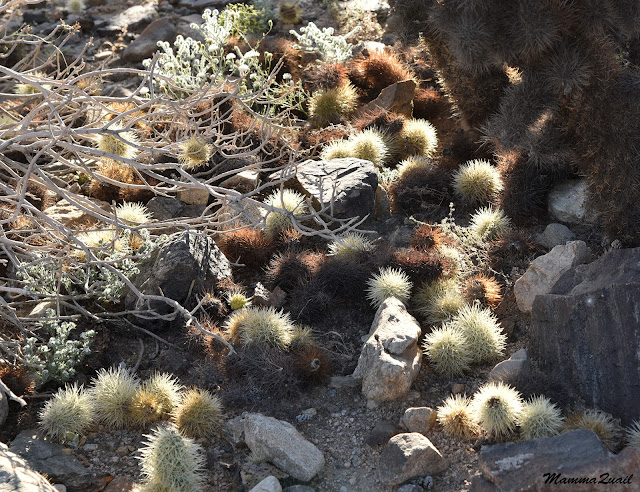 I accidentally stepped on one of these founded segments when I strayed off the path to inspect more closely an interesting plant nearby. Serves me right.
The sun was setting and the chikas were getting anxious. They demanded dinner. We collected back at the car and as we drove off I took a longing look at the cholla patch. We checked out several places in the park that day, hiked the Hidden Valley and the Barker Dam trails, and drove all the way to the south entrance and back. We had covered much ground, but I felt rushed, and once again feeling that this was but a taste. I was not yet sated. 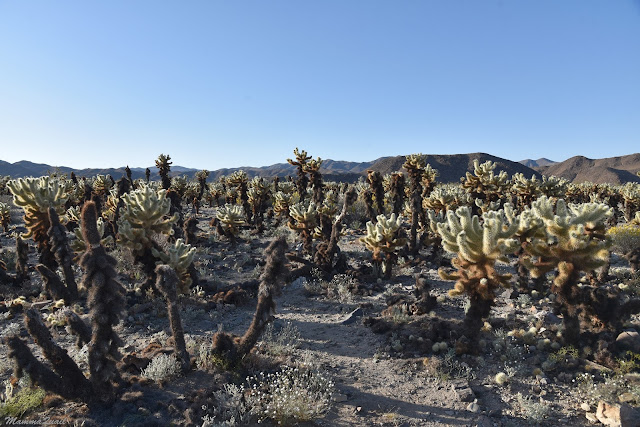 On the way out of he park I stopped once more to photograph a shrub blooming by the roadside, a datura this time. We had the morrow still, one last day at Joshua Tree National Park, and I was determined to make the best of it. Indeed, it was the trail to Pine City that we hiked on the morrow that I finally got satisfied.

Many thanks to members of the California Native Plants Society for their help i identifying plants!