A New Found Land: Up Pine Creek at the South Warner Wilderness

After our first and very successful family backpacking trip on spring 2016 to the Manzana Creek we agreed to go again, this time during the 4th of July week. Inspired by a trip I had with my friends last fall I aspired to backpack in Yosemite National Park. On the very day the lottery of the coveted wilderness permit opened I sent forth my application, but I didn't win the lottery. I moaned about being unlucky, but as it turned out, had I won the lottery it would have been useless for us now because the high Sierra is still under a thick layer of snow.
It didn't take me long to decide our plan B. A quick call to the local ranger office and the decision was made  we were going to the South Warner Wilderness at the Modoc Country.
We had visited the Modoc only once before, for 3 days during the spring break of 2014. Spring was just beginning there and the weather was somewhat challenging. Still, we had a nice discovery walk at the Modoc NWR, an interesting camping experience at the Stough Reservoir, and a lovely hike around Clear Lake. When we left the area it was with every thought of going back there when the chance came. And now the chance had come.
I selected for us the Pine Creek Basin to Patterson Lake Trail, which looked very promising on the map and from internet images I looked at. The ranger I talked with before going had told me that they expected the trail to be clear of any snow. So we packed our gear and after a day's travel and a night in Alturas we arrived at the Pine Creek Basin Trailhead.
Already at the trailhead I found lovely flowers to photograph, in between getting our packs ready and making final decisions as to what stays in the car and what goes along with us.
Being there in a full family format it was a given that we'll take it easy. Our destination for the first day was Pine Creek Basin - only 2.5 miles of a mild uphill hike.
We started walking late in the morning. It was sunny but not too hot. Before long we plunged into a pretty conifer forest.
We quickly fell into the same walking pattern that we assumed at our first family backpacking trip to Manzana Creek last year: the elder chika in the lead followed closely by Pappa Quail, the younger chika dragging her feet a considerable distance behind them, and me bringing up the rear. At the pace we were going I had all the time in the world to photograph the numerous wildflowers that decorated the forest floor near the trail.
What I didn't have was the will to kneel down for a better close up while carrying a heavy backpack. Hence, many of my photos show looked down upon flowers ...

But before royalty I did kneel down, heavy pack and all. There were orchids along Pine Creek. Many of them. And all of the same species.
We walked along Pin Creek the entire hike. Much of the time we were very close to the water and the lovely flora that bloomed in and near the water.
We walked at a good pace. My younger chika, who normally stops to check every stick or pine cone along the way found it difficult to stoop with the backpack on so we were making nice progress.Including my flower-appreciation pauses.
I met some old acquaintances along the path, and was very pleased to see them.
And then, there were flowers there that I saw for the first time. Turns out that the one in the photo below grows in California in Modoc County only, and its range there is limited pretty much to the South Warner Wilderness. I didn't know that at the time, otherwise I'd make more effort to get a better image of it.
At time the trail separated from the creek and we were flanked on both sides by the trees. The forest looked healthier than those of the Sierra Nevada. Their remoteness surely helps. Perhaps they suffered less from the drought too. 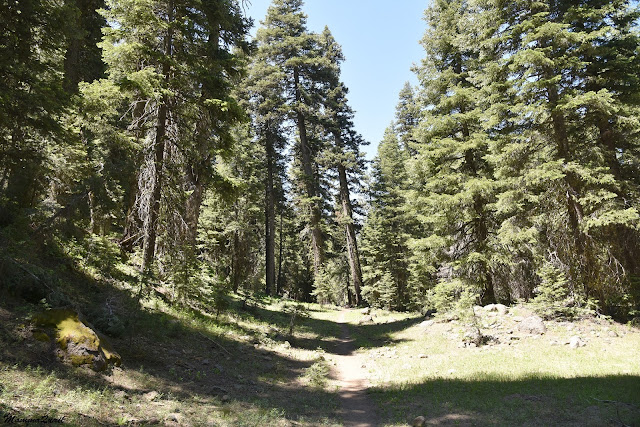 Below the trees bloomed the usual forest floor crowd: false lilies, violets, blue eyes Mary, and others.
For most of them I didn't bother to kneel or even bend over - my oack was just too heavy.
But some could not be photographed from any distance. On one of our breaks I sat down properly and took a close up photo of the tiny Blue-eyed Mary that I wasn't sitting on.
And then - surpris!  the chikas found a tiny snow patch near the trail. My elder chika was absolutely thrilled. She had yearned for snow play for a while and was exhilirated when I told here that there was likely more snow to see at the higher elevations. Little did I know how much grief this lingering snow would bring us on the following day.
I was happier to see different types of patches. Floral patches, to be exact. As the trail led us back near the creek the trees subsided and we were walking through narrow, sunny meadows, dotted and spotted with mule ear, larkspur, and other beauties.
These little meadows were dominated by the California Cornlily, which was just beginning to bud out. I bet that by now, a couple of weeks later, the entire area is alight with their bloom.
Those little meadows were a wonderful relief from the relative darkness of the forest. We probably would have lingered more in them if not for our urge to get to Pine Basin, and for the mosquitoes that plagued this pretty places. 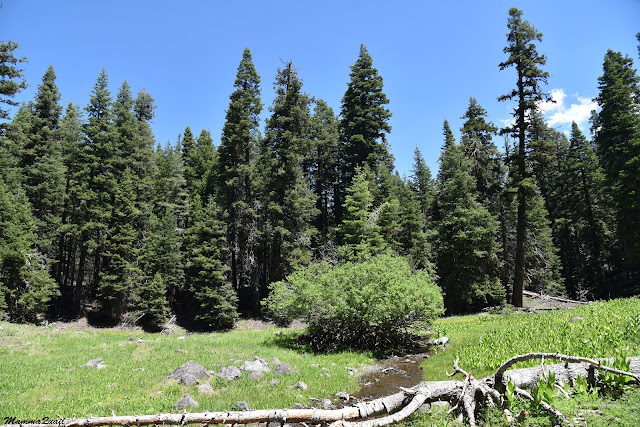 Back in the forest for the last lag of hiking for that day. We had come across a gentleman who was hiking up to Pine Creek Basin. He was alone and he was walking at a great speed. But he did stop to chat with us as he overtook us from behind. He told us that he had grown up in the area and divulged many good ideas for future hikes at the Warners.
The trail separated from the creek again, and the grade became steeper. In between the trees I caught glimpses of the lockal rocks: twisted layers of volcanic ash sediments. 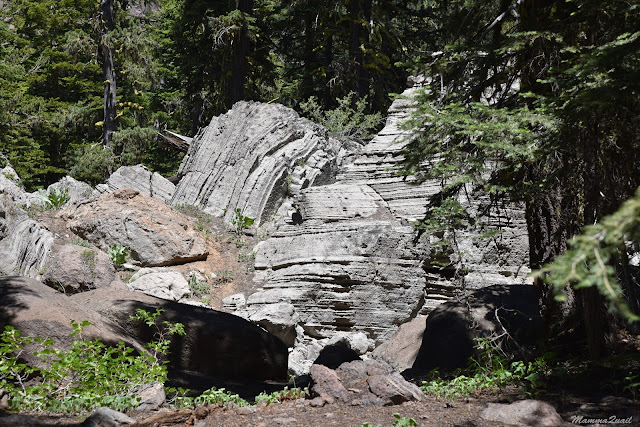 And then I caught sight of something even more beautiful: a shiny emerald-colored pond way below, and a gashing creek cascading right into it. I looked up - my family were already far ahead. I Enjoyed the sight by myself and then hurried on to catch up with them. They had not noticed it on the way up but they would on our way down and out, three days later.
At the top of the steeper uphill segment we stopped again for a breather. The fellow that had overtaken us previously was now coming down. He informed us that Pine Creek Basin was just around the corner, what cheered the chikas quite a bit.
And I could tell that the area was different because the vegetation was changing. All of a sudden there were new wildflowers to see.
And then the creek was with us once more. There must have been a cascade along the way that we did not see because now the water was nearly level with the trail again.
The trees opened up once more and we were washed with brilliant sunshine. By now, however, we were hot and sweaty, so we sat down under a tree and enjoyed the scenery from within our shadedspot.
An amazing scenery was before us: a green round valley crowned by snow-capped gentle peaks, a wide creek accompanied by a network of narrow brooks marked by lush willows, open wetlands dotted by small groups of trees, and a shallow pond rimmed by rushes and wildflowers.  We had arrived Pine Creek Basin.
Despite the early hour of our arrival there we decided to remain there for the night as planned. We found a lovely campsite spot on the other side of the creek where we pitched our tent, and then we went exploring the Basin. Of our exploration I will write a separate post :-)