No More Will I Forget You, Manzana Creek.

I finally did it. After years of hoping, gathering equipment, dripping the idea bit by bit into Papa Quail's consciousness and priming the chikas on independent trips, it finally happened. On our spring vacation we went on a backpacking trip in full family format.
Considering how long I've been gearing up for it, this trip was completely impulsive, almost spontaneous outing, for which I had less than a day to prepare.

This spring is all about wildflowers, and this time we were going south to Carrizo Plain and from there to Santa Ynez Valley and Figueroa Mountain. I didn't want so spend more time in the car and so I set our backpacking destination to be in the San Rafael Wilderness, right behind Figueroa Mountain.

Our main objective for that day was to observe the mega-bloom of Figueroa Mountain, and this we did big time. I cannot recall ever seeing a wildflower display so grand, so impressive. If not considering the surrounding backdrop I'd say it even beat the display at Death Valley.
We spent the greater part of the day driving slowly (very slowly!) along Figueroa Mountain road, stopping frequently to appreciate the bloom. It was already later in the afternoon when we finally arrived at the Nira Campground. We had lunch, completed arranging our backpacks, and headed east along the Manzana Creek.
There are many trampled, piratic trails in that area, and almost immediately we found ourselves on the wrong side of the creek. And it wasn't the last time. After realizing our mistake we clambered back across the water and onto the trail.
A few steps into the trail Papa Quail turns to me and says that we've been there before. I cannot remember it so naturally, I tell him he's wrong. I would have remembered this lovely place, I argued. You must be thinking of a different trail.
The trail is indeed very lovely. And very lively too: many other people are out with backpacks or on day hikes. There is much bloom along the trail and although we're trying to make it fast to the campsite where we wished to stay I do stop occasionally to photograph, then run heavily to catch up with the rest of the Quails.
Pine trees were common along the earlier part of the trail, and their cones were strewn in abundance on the ground. One of them caught my attention: it was partially dismembered from the top. Whomever did this obviously wanted the pine nuts.
It is likely to have been a squirrel, but it did bring me back a memory of a bear I'd seen at Kings Canyon NP that was sitting on a pine tree and was tearing green pine cones, eating their soft inside.
The pines were a little thinner up the slope and the space in between them was filled by shrubs and lots of wildflowers. As we walked on I started to get an odd sensation that I have been in this place before.
I was beginning to wonder if Papa Quail may have been right after all. 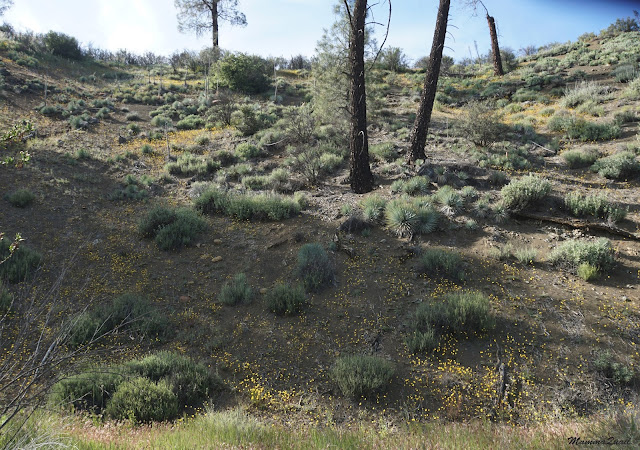 The soft soil that made the slope turned into a low cliff of brittle rock. Yucca grew right at the edge, their roots holding the rocks from eroding down into the creek. Mostly balls of foliage but also an occasional old bloom stand.
After about a mile we arrived at a campground. Not the one we were planning to stay the night at, but we got an idea of what to expect. Backpacking at Manzana Creek is certainly upscale (or downscale, depending on your point of view). There are designated campgrounds there, that are nicely spaced from one-another, with a few campsites each. Each campsite has picnic tables and fire pits. For our first time family backpacking trip this arrangement was welcomed.
We passed the first campground and continued on.
The slope above the creek is of soft, eroded soil, and the south-facing slope we were walking on was alight with wildflower bloom. Large patches of poppies were the most distinct, but there were many other flowers as well. One of them didn't look like the rest - it had no leaves. It was the parasite broomrape flower.
The trail went higher above the creek with a low, rusty fence holding the soil in place. It was then that I finally remembered. It was a long time ago, but I certainly was there before. Papa Quail was right after all.
After admitting my mistake I went on thinking sad thoughts about the state of my memory. How could I forget such a pretty hike?
I don't remember what time of year is was, but I doubt it was at spring time. I would have remembered the bloom for sure. Although now I cannot swear on that.
One thing is sure: I will not forget it again. And not only because of this blog post.
Back in the creek bed again, crossing little side washes that were dry, but displayed a beautiful gravel vegetation. 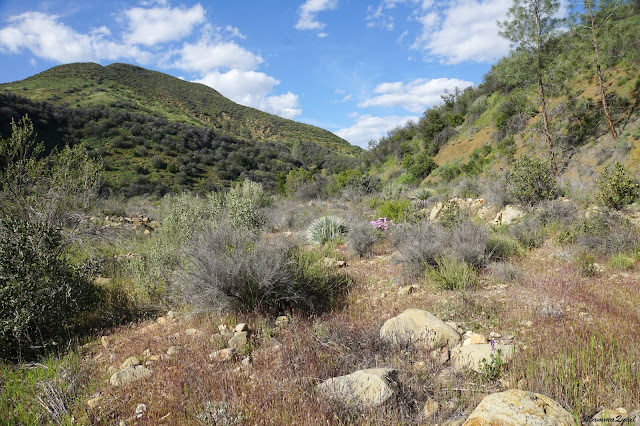 One od these gravel species was the Santa Barbara Milkvetch with its creamy flowers towering like candles over its grayish-green foliage.

Servicing the milkvetch as well as other plants were little ladybugs, eating away aphids.
Wherever there are flowers there will be butterflies. We encountered many butterflies along the trail, most of them wouldn't stand still. This one, however, did.
We came across a man who was placing laminated notes under a rock. When I inquired about it he told me there were teenagers doing survival training in the area, and that he was leaving instructions for them.
Lucky teens, I thought.
It was getting late and we were nearing the campsite we planned on when we came down to the creek again. Across the water was a single tent. It was then that I made a critical mistake - eager to arrive at the campsite and seeing a row of rocks across he creek I led my family over to the other side without consulting the map first. 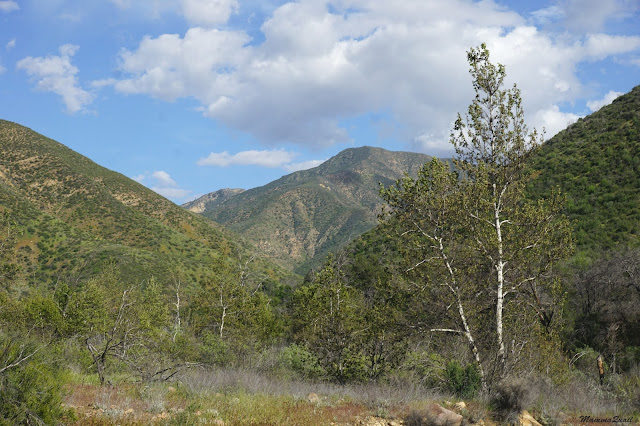 That tent, apparently belonged to one of the surviving teens. We looked for the promised campsite but didn't find it. Instead of backtracking we kept along the water, looking to connect with the trail. At first it was easy, but before long we were pushing our way in a thicket of willows and other tall creek vegetation.
And the light was fading.
Papa Quail got anxious. He wanted to head back. I was ready to look for a flat area and pitch our tent right there, camping like the survival teens. But then I heard the distinct sound of people breaking firewood and immediately I knew where the campsite was.
Still, we had to cross the creek once more, and push our way through more vegetation. During all of that my younger china managed to drop her new pocket knife, and while we all waited for Papa Quail who went back some distance to look for it I saw some fresh paw prints in the mud: a raccoon was there!

The knife was found and we all crossed the creek and stumbled into the first campsite of the Fish backpackers campground. The site was occupied by a nice family who directed us to a second site a few yards away that was all vacant, just waiting for us. With much relief we all took off our packs and while the chikas slumped on the benches Papa Quail pitched the tent and I went to fetch firewood.
It was quite late when we finally finished to cook and eat our dinner and we were all tired from the long day. Papa Quail took the chikas to the tent and remained there. I hanged our food bag on a nearby tree and after making sure the campfire was completely out I joined my family in the tent.
As tired as I was, however, I didn't sleep well at all. The excitement of the day kept me awake for a long time. That, and a serious dilemma: I found out that evening that my water sterilized had run out of batteries. Without a water sterilizer should we even bother going on?