Time was pressing. In two weeks' time I was to lead a 4H hike and the destination I selected for that hike turned to be unsuitable for that group. I needed to come up with another nice trail and, as always, I found what I needed within the vast selection of East Bay Regional Park District hiking trails.
Tilden Regional Park east of Berkeley is beautiful, accessible, and high in popularity. I have taken the 4H Hiking Project there before, but this time we would do a different trail: the Laurel Canyon/Wildcat Peak loop in Tilden Park Nature Area, near the visitor Center and Little Farm. This 2.5 miles hike involves a good measure of elevation change that was just right for this group. As it turned out, however, the 4H'ers (as well as their adults) had to deal with a much greater challenge, brought on by the weather.

On the first day of March, however, I hiked there by myself, to check out this loop. I had hiked it before (sadly without my camera, after having left it at home in my hurry), but that was a while ago and I needed a refresher. Besides, it was a perfect day and there's no need for other reasons to be out in the woods.
The first challenge when hiking with children in an area with popular attractions is to avoid unnecessary distraction. While that trail officially begins behind Little Farm, I knew I would never get the kids to even begin the hike if we were to start there. So I started my hike behind the visitor center, where a wide dirt road ascents into the eucalyptus grove and meets Laurel Canyon trail in a safe distance from the attraction.
I started the hike in a Eucalyptus grove but soon transcended into the native East Bay live oak/laurel forest. The Laurel Canyon trail is narrow and ascends uphill in a series of long switchbacks that go between some pretty cool looking trees.
The trees house a myriad of other creatures. Some just like the high grounds. Other live off the tree. literally.
March 1, the day of my solo hike, was sunny and warm. Wherever I looked there was new spring growth. Wherever the sun seeped through the canopy the new trees were rushing upward to fill it in.
The deciduous buckeye trees were budding with new spring foliage, lovely bright green. Easy to forget that merely 3 weeks before they wore bare gray back.
But although spring was already in, winter wasn't about to leave just yet. The soil was damp still, and new mushrooms were growing on the forest floor. 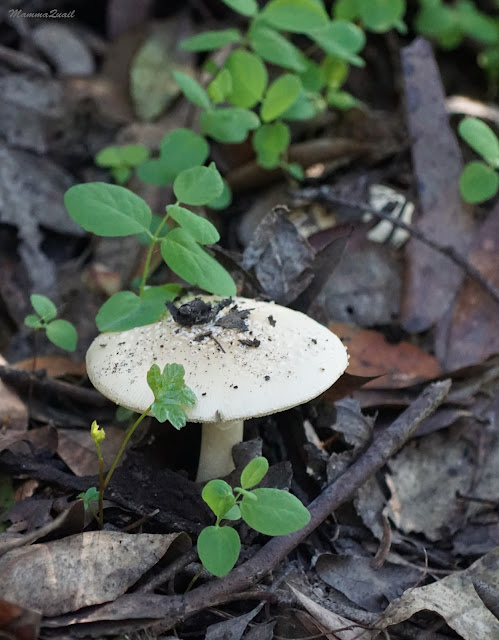 And as far as spring bloom goes, it was still the time of the ephemerals: the first flowers of spring.
All throughout my ascend in the woods I could hear the cheerful sound of creek water flow. Eventually I go to cross it. On the previous time I had hiked that trail that little creek was dry but now it was running happily between the trees.
The trail crosses a few tributaries of Laurel Canyon. A couple are transversed by small wooden bridges. Others are crossed with a wide hop (or a wet wade). In certain places the way down or up the creek is too steep to hold a stable trail and man-made steps were built to maintain possibility. These little stairways look like something out of an ancient fairytale.
Two weeks later on my March 12 hike the middle of these was covered with foam near the trail crossing. I don't know what caused it. My thought was that the rushing water beat the decomposed proteins of some dead animals in the stream, but I don't really know. I only saw it there and it was quite thick foam.
March 12 was a rainy day. Actually, rainy is a bit of an understatement. It was a sorry day. The rain came down on and off throughout the hike but the wind blew strong and cold. That hike came after almost 3 months break in Hiking Project activities and neither me nor the members had any thought of cancelling it because if the weather, so we geared up and hiked that trail despite the rain and the wind.
As always when I go out on a stay-indoors-weather I meet other creatures out, who flourish in wet conditions. Banana slugs, for example.
East Bay soil is dark and heavy, and when wet it transforms into thick mud that is both very sticky (to soles, clothing and skin) and very slippery. Hiking uphill is twice as strenuous when the mud cakes on the soles of the shoes and glues you down to the trail. Hiking downhill is even more challenging because the tendency to slip and fall multiplies 100-fold.
We were chugging along on Laurel Canyon when the chaperon in the back called me to stop, and when we gathered around him he showed me this grub that he found on the trail. It was huge (in insect scale) and it wiggled helplessly on the man's hand. Its entire body looked soft and juicy (from a bird's point of view) but it had a hard head with nasty-looking mandibles that looked like they could cut through anything. I wondered if that could be the forest's big nemesis - the grub of the boring beetle.

Another, even more fascinating find, was the witch's butter fungus that was growing off some dead logs along the way. The wetness had turned the orange color even brighter, giving it a sheen that made it look like something that flew out of someone's nose. Needless to say, the children were quite amused by this fungus.
Higher up near the ridge the trail leaves the forest and enters chaparral area, where sunshine is abundant (on clear days, of course). On March 1st it was very abundant indeed. Glistening in the sunlight - the leaves of one of the common California Coast residents: the Poison Oak.
I reached the top of Laurel Canyon Trail and turned left onto Wildcat Peak trail. I was still ascending toward the peak, emerging from the chaparral to open, grassy areas where many wildflowers were blooming.
Blue dicks and blue-eyed grass were the most common wildflowers up by Wildcat Peak, dotting the grassy patches with blue and purple.
At the Wildcat Peak there is a stone circular wall with benches - the perfect plave for a rest stop. And there is a fantastic 360° view of the Bay Area.
Although Wildcat Peak isn't very high it is prominent and the views stretch far. But I didn't have to look far to see the San Pablo Reservoir.

To the north: San Pablo Bay and Mount Tamalpais in Marin County, where I recently had an amazing spring hike. Seers through 'The Mist' might be able to detect the Titan's Castle and Atlas holding off the sky :-)
Heading this post is the photo of the view west, of the Golden Gate and the famous Golden Gate Bridge. That photo and the other view images above were taken on sunny March 1st. By March 12, the view was very different: it looked as if the world ends at the edge of the forest.
The upper part of Wildcat Peak Trail goes through human-height chaparral, and I was making my way down that trail, taking care not to trip on the narrow ditch cut through by the runoff water.
Not having woody stems of its own, the manroot plant vines on top of the rabbit brush to get to the sunlight.
That slope also features open grassy areas reach with wildflowers, among them the California Poppy: our State flower.
A colorful patch on the hillside was dominated by Indian Paintbrush. Facing the west sun gets the best wildflowers out.
A brilliant silver bush lupine on the edge of the trail. I arched around it to try and get the best view, with and without the Bay in the background.
Most of the wildflowers were closed two weeks later, hiding their blossoms from the downpour. The lupine was still blooming strong, the flowers advanced now to the inflorescence tips.

The slope of Wildcat Peak Trail is steep, and on March 12 was very, very muddy and slippery. Me and the 4H members were inching down slowly careful not to slip on our behinds. A couple of the kids got into a sour mood but others seemed to flourish in the wetness, just like the trees.

Not all trees could take the storm. Freshly fallen trees, some were already previously dead, littered the forest floor.
The lower part of the trail is back in the forest. In that area the grounds is back to the forest undergrowth wildflowers. A common one I saw there is the non-native forget-me-not.
The forest ground is the neighborhood of the wood rat. Their twigs nests were all around, little mounds of sticks, each homing one rat.
They also build penthouses: safety nests up the trees. There they escaped from ground dangers.
I kept walking down, looking around. One of the forest shrubs if the chaparral currant, its pretty blossom lightens up the dark forest under story.

On my March 1 solo hike I continued all the way to Jewel Lake: a small, old time reservoir that is now a beautiful wildlife-teeming pond.
Many insect flew over the water, and a happy black phoebe kept looping over to grab them, then going back to its favorite willow branch to preen and keep watch.
Not as many waterfowl as I had expected: A sole common mergancer who managed to escape my camera, and a single male bufflehead duck who wasn't bothered at all by my attention.
A turtle was enjoying a sunbath. I would have gladly joined in, but at that point I was already hurrying back to the trailhead. I needed to be on time to pick up the chikas from school. 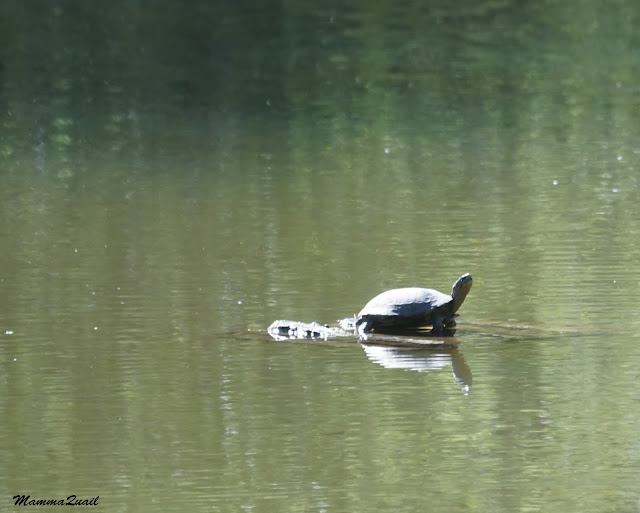 I wasn't too much in a hurry to miss the little boardwalk detour through the riparian wetland. 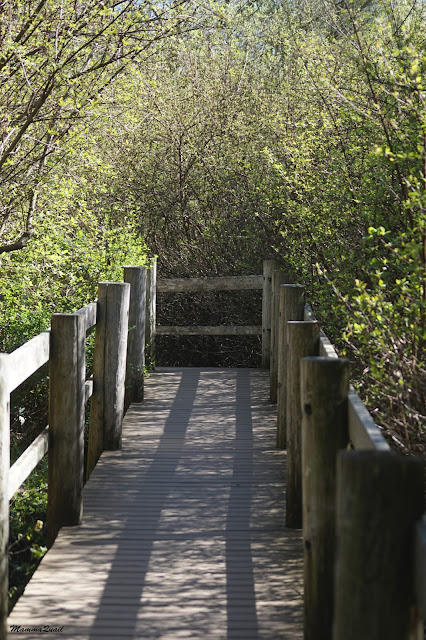 The dominant vegetation about the boardwalk were willow bushes, many of them had already finished blooming. The photo below was taken on the higher elevations of my hike.
Needless to say, on rainy March 12 the children were in no mood to make a detour through the lake. Wed, muddy, and weary from the difficult descend, they all opted to go straight away to the Nature Center. There, after a few minutes of warming up, they were gathered along with some other kids by a local EBRPD naturalist who gave them a little presentation about pond life, and then took them outside to a little pond behind the center for some hands-on exploration. I thought they ewould be too tired to go but to my astonishment they all donned their coats and run outside into the rain as if they completely forgot how they complained about the wetness just minutes before :-)
They dipped nets at the pond and fished all kinds of insect larvae and other microscopic life and brought samples back inside to view by the indoors microscope (the newt was left outside. The rest of the animals were promptly released after the viewing).
As I watched the children completely absorbed and fascinated by these microscopic creatures, enough to not mind at all the rain and mud, I thought about the barriers that our comfy homes put between us and Nature, and how easily we tend to dismiss the joys that come with the rain for the comfort of our dry homes. Don't get me wrong - I like to keep warm and dry as much as anyone. It's just that there's so much so see and appreciate when it rains that can make rainy outings a true pleasure to experience and to share with children. And that girl in the pink boots and her friends who went out in the rain to meet and engage Nature, they are the future of Nature appreciators in California, and the world at large.