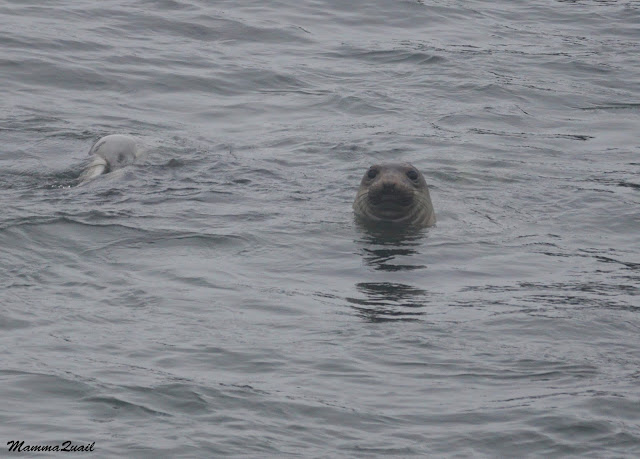 One of the famous stops along Hwy 1 is the Elephant Seals rookery at Piedras Blancas, near the town of San Simeon. We too have stopped there many times to observe these magnificent seals. There, beginning at the north end of the seals observation area, there is a 2 miles trail stretching to the north along the coastal cliffs all the way to the Piedras Blancas Lighthouse access road and a bit beyond. Last Friday I hiked that trail for the first time, and I could kick myself for not having done so before. It's that pretty.
Nearly all the photos in this post are from my hike last Friday, but I also included a few photos that we took at the observation area on previous visits. 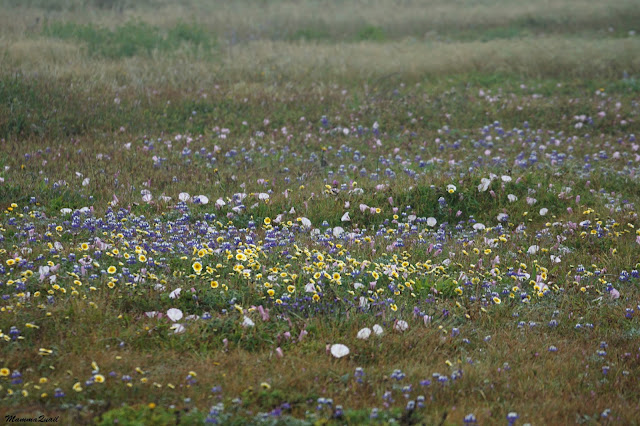 Here is a close up of this pretty white-rimmed daisy:
Eventually I made it to the end of the trail, where a little loop led me to the final view point at the edge of the cliff.
Seaside daisies, or fleabane, as they are also called, decorated the cliff's rim.
I gazed below. Only a handful of elephant seals were there, and all by themselves, not huddled together. I wonder if they are the 'outcasts' of the colony.
This season only the females and young males are seen on the shore. The females also go through the process of molting (changing their fur). (The photo below was taken at the main area of the rookery, near the trailhead).
My way back was faster, as I didn't stop as often to take photos. Besides, I was already feeling vwry uncomfortable swishing in my shoes.

But some sights are hard to resist.
It was a bit more than a drizzle now, and the rain drops became bigger and heavier. They slud off the smoother plants. Hairy plants hanged on to the droplets, which gave them a silvery sheen. The prettiest one was this little lotus that actually looked iced.
And another hairy member of the fabulous Fabaceae family: a milkvetch shrub. There are many milkvetch species in that area and I was not able to determine which one this is.
I regretted that the trail didn't take me up the coastal hill that was west of the trail, but I wasn't about to go off trail to explore it. Below the hill were cushions of silver bush lupine with bright blossoms like candles on a cake.
The silver bush lupine I saw at Piedras Blancas has blossoms that are considerably lighter in color than those I see in the Bay Area. They ranged from light pink to off-white.
And east of the trail: more patches. California Goldfields dotted with morning glory, like a fancy quilt sewn by a tipsy seamstress. 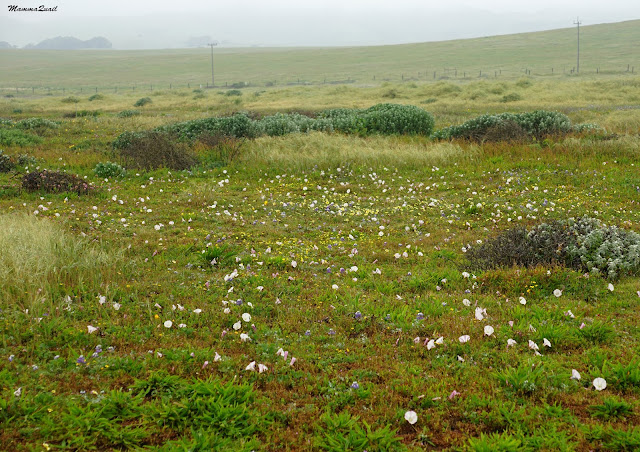 I crossed the lighthouse road again on my way back, then had to go once more through the thistle and mustard gauntlet. I didn't think it was  at all possible but my shoes got filled even more after that.
I continued sloshing to the cliff edge. The seals were where I'd left them an hour before. The coastline, however, got significantly darker. 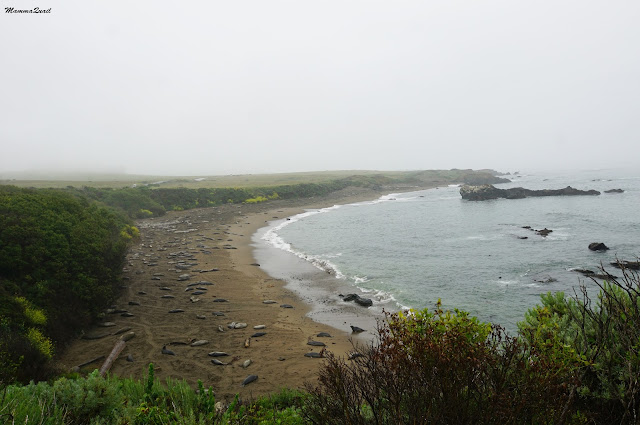 Rock islands, left behind by the eroding coastline, provide shelter to seals and sea lions, and to the many birds of sea that roost there, safe from land predators. Shrouded by the mist they look like pictures from a far off fairyland. 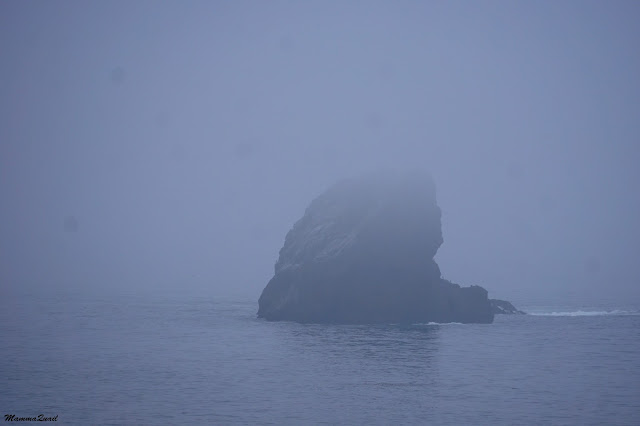 As the marine mammals were taking their beauty sleep in the sand, land mammals were busy getting their lunch. At least the vegetarians did. There are plenty of rabbits in the area, and they are far less skittish than those I see in other places. Or maybe they had recognized me as a sister herbivore.
Ground squirrels are also plentiful at Piedras Blancas, and at the observation area they are also very bold, approaching visitors and begging to be fed. Sadly, they often do get fed by humans, which is a bad deal for both squirrels and humans.
The squirrels I saw on my hike weren't used to humans and sought to distance themselves from me as much as they could without getting too far from their territory. Or perhaps they recognized me as an aware naturalist who doesn't feed wildlife :-)
By the time I made it back to the observation area the rain was coming down in earnest.
I took a few quick shots of some more flowers and some more birds I saw, and then walked to my car.
It was well after lunch time. I changed my soaked boots to sandals, converted my hiking pants to shorts and placed a towel on my seat. I then sat there in my car, eating cold lunch and watching all the people who stopped on their journey to watch the elephant seals.
The Pacific Coast is often foggy and overcast, even without any rain. Gray is the usual weather when we stop there. On a few special times, however, it was sunny when we visited Piedras Blancas. I added here a couple of photos from those sunny visits. There certainly were more bush birds about when the sun was out.
On sunny days the butterflies (and other insects) are out as well.
I finished my lunch, bade farewell to Piedras Blancas Elephant Seals, and drove away. The seagulls were leaving too.
My car GPS suggested that the quicker route to the Bay Area would be on Hwy1. Being too tired to consult my brain and too lured by the promise of the beautiful coastline, I followed the suggestion and headed immediately north. That proved to be (as I should have known) a mistake, as I found myself trapped behind slow moving cars for the entire 80 Big Sur miles with no way to pass. The beautiful coastline could not ease my mind either: the road was so foggy I could barely see the car ahead of me, let alone the ocean.
I'll be back at Piedras Blancas again next week, this time with other people. We will look at the Elephant Seals, appreciate the coastal beauty, and if anyone would be interested, perhaps walk a bit of this beautiful trail. They would sure want to if they'd know how beautiful it is.

More information about the Piers Blancas Elephant Seals is at the website of the Friends of the Elephant Seal volunteer organization, whose members are often present at the observation area, ready to share their knowledge and love of the seals with any interested visitors.