Over and Out: From Warren Peak to Pine Creek Basin

The second night of our backpacking trip to the South Warner Wilderness we passed on an isolated rocky spur of Warren Peak, high above Patterson Lake. The lake, which was our planned destination, was like the promised land for Moses: we could see it but we couldn't get to it. Not without putting ourselves in serious risk.
We also couldn't go back the way we came: we had no equipment to cross the snow field that covered our trail and neither of us wished to try and bypass it again on the slope above where we had come so close to harm while passing there the day before.
And so we were, all alone in the wilderness with w wonderful view all around, a fantastic wildflowers display, and a patch of snow as our only source of water.
The wind, which battered our tent most of the night had died down by the morning. It was still very chilly when I emerged from the tent and started melting snow to boil for tea.
Pappa Quail joined me in making breakfast. Unable to put his worries out of his mind, he did not sleep well at night. The chikas too were worried, especially the young one who refused to even think about going back the way we came.
Moving around doing our morning routine I took in as much as I could of the place we were. The view was absolutely striking.
And not just the view. Despite having photographed all the wildflowers there on the evening before I still found reasons to snap more shots of them. To get more points of view.
We all felt better in the brilliant morning sun. And once the sun had risen the temperatures did too and we felt warmer. 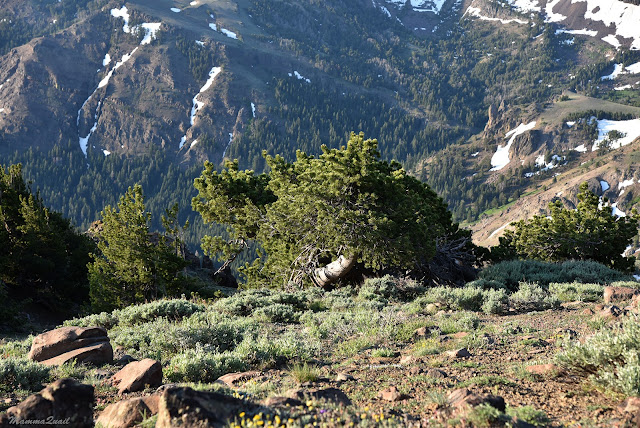 But there was still the problem of getting back. After a short discussion it was agreed that I'd go ahead and scout for a safer route. I went light, taking only my phone (surprisingly we had reception there), and my camera. I went up the side of Warren Peak where I had started exploring on the previous day.

The beginning was easy and I quickly gained altitude. At some point I turned around and looked back at our campsite. Pappa Quail and the chikas were standing there still, following my progress. I waved at them and they waved back at me. Then I turned and moved around a boulder, leaving my family was out of sight.
Soon I was up on the narrow ridge leading to the peak itself. There was no where to go left or right so I continued on up the ridge's knife edge. 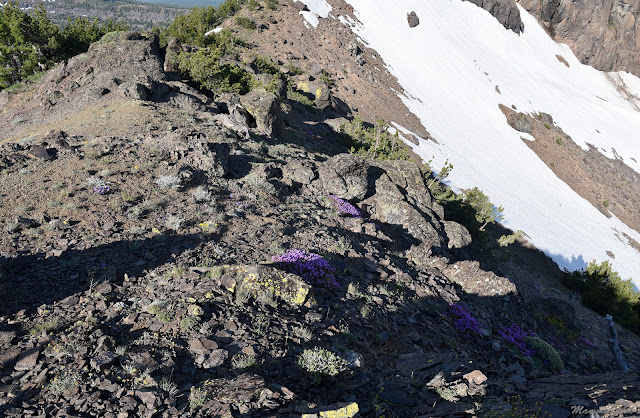 After more climbing I had a full and clear view of Patterson Lake. I could see a way down to it - a doable way down among the rocks. I filed that in my mind and moved on up the ridge. 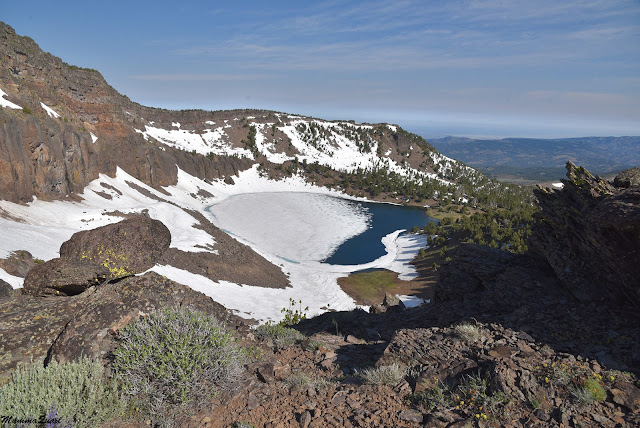 I came upon quite a few obstacles - tangles of trees, large boulders, and slippery gravel slopes. I carefully pushed my way through the trees, climbed around the boulders holding on to them with both hands, and transversing the gravel on my bottom.
I could tell that I wasn't the first human to have passed this way this season: faint footprints were visible here and there. I followed them. 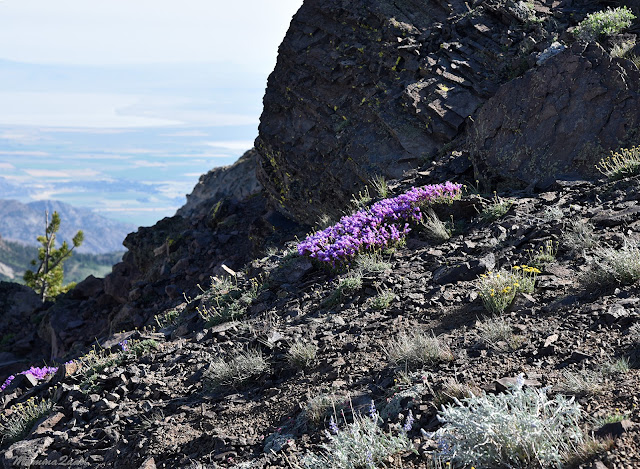 I made it all the way to the other side of the ridge where I had a clear view of the slope down to where it met the trail. It was doable. Scary at points, but not as dangerous as going back past the snow field of yesterday.
I turned about and made my way back, occasionally stopping to enjoy the wildflowers along the improvised path.
I came back down to the campsite. I was away no more than half an hour, but Pappa Quail hagged me as if I returned from a year's absence. I announced cheerfully that I found an easier way to get back but my family didn't show much relief. My younger chika in particular was worried still. She kept asking me about the way and all I said to calm her down seemed to have worked her up even more so eventually I resorted to simply asking her to trust my and my judgement. Whether she was ok with that or not, there were no other options.
Actually, there was one: I told them that I believed we could go down to the lake and suggested we should do that and stay another night on its shore, just as we had planned. But the rest of my family were unanimously against the idea - they wanted out and back on safe grounds. My younger chika went even further and suggested we get back all the way to the car and back to town, but the rest of us disagreed.

While I was away Pappa Quail and the chikas had packed nearly everything so it didn't take long to finish packing and to get going.
Going up with everybody proved to be a challenge. The younger chika was terrified and had to be guided with every step. She chose to stick with me so I held her hand and directed her moves while Pappa Quail carried her backpack as well s his own, and prevented the elder chika from rushing ahead.
It took a long while as we moved very slowly and stopped frequently to regroup and allow the younger chika to calm down her anxiety, but eventually we made it all the way up, safely.
From there we went down the slope, meandering between the shrubs and trees until we reached the trail. I believe that our mutual sigh of relief could have been heard all the way down to Eagleville.
My family wanted to stop and rest but it wasn't a good place for that and we have already spent a lot of time getting over the ridge, so I urged everybody to move on. 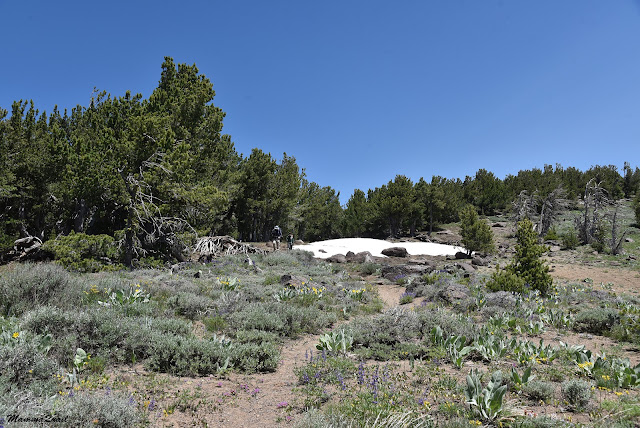 Going down the trail was fast and easy. We now walked quickly, leaving the trail only to bypass the snow piles that blocked it here and there. Still, I could tell that these snow piles had shrunk since yesterday. I wondered had we stayed at Patterson Lake another day would we've been able to get out of there by the trail itself. But I knew we wouldn't have risked it. That much snow would probably not have melted that quickly. 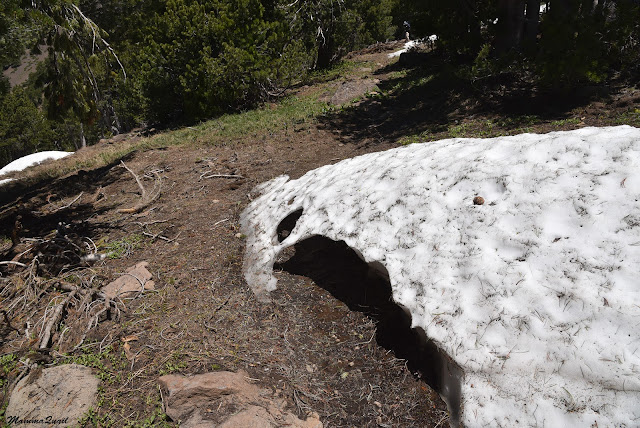 We did stop to rest at the intersection with the Pine Creek Trail but not for long. Now that the big weight of getting back on track was off our chest we all felt lighter and more energized. Besides, we were going downhill.
We continued on Pine Creek Trail at a fast pace. I was in the lead now, racing down the trail with the elder chika close behind me. At a good distance in the back came the younger chika with Pappa Quail bringing up the rear.
He took the time to find a bird on a nearby tree:
This time I didn't stop often to photograph wildflowers individually. I had photographed most of them on the way up. I did, however, take many wide view shots, snapping them as I walked, not even slowing down. The air was clearer than the day before, and the view sharper. Shasta, making its appearance  around the mountain side looked less ghostly than yesterday.
And then I came upon the small patch of fritillaries I remembered from yesterday. Now almost all of them were open. I stopped, dropped my pack and sat down to photograph them from up close. Within a few minutes all my family had passed me, leaving me behind, lying on the dusty trail in attempt to get an inside photo of this pretty flower.  Eventually I wearied of it, got up and continued marching on, hoping that at least one of the photos came out right.
Down, down, down. I caught up with my family and passed them again, heading for the lead. The chikas wanted a lunch break but I urged them on, wishing to stop near a running creek. 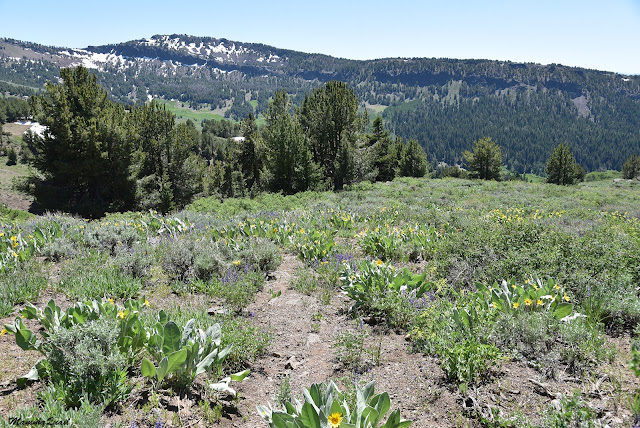 The sun was bright and the colors vibrant. Although I rarely stopped for individual flowers on my way down, I did try to capture the lovely combination of bloom colors. 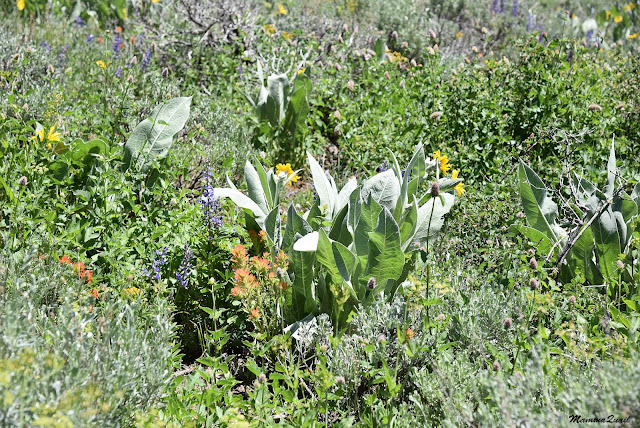 Flowers weren't the only colorful beings there. Many butterflies filled the air, hovering over and around the flowers, sometimes coming to a stop.
The bloom was at the peak, but for some of the butterflies the season was nearing its end. 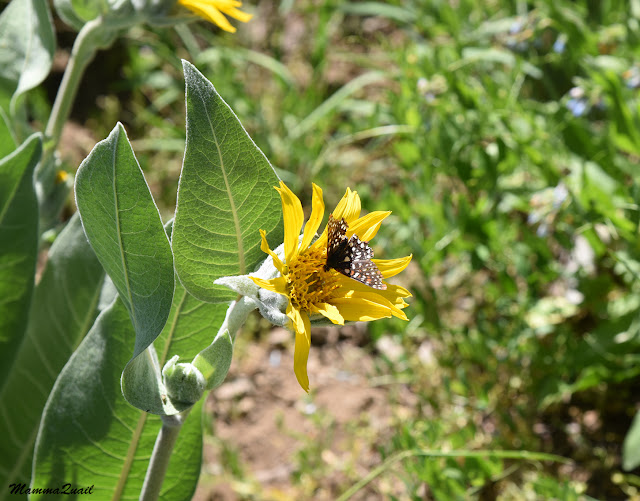 Looking back, I could see no more snow patches. We left all our snowy adventure behind, now only in memories and photographs. The scenery was as green and summery as could be. 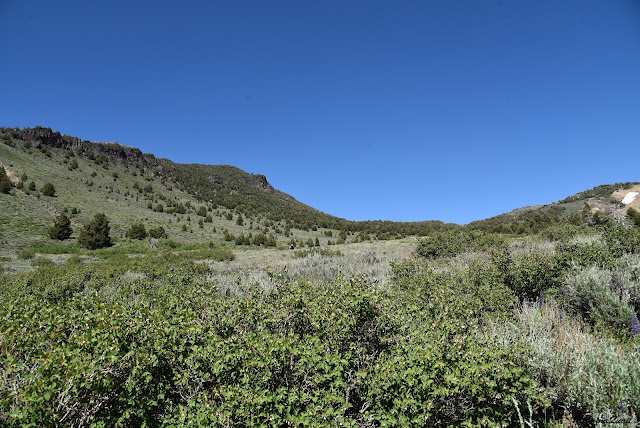 I did stop for another flower, one that I didn't photograph on the way up and I wanted to make up for this omission.
My family had passed me by again. When I caught up with them they were all seated under a tree near a small but very lively brook. Pappa Quail had the food sack out and they were all waiting for me to pull out the cooking gear which I carried.
Was had a hearty lunch and a nice, long break. Then it was time to move on. Before long we were going in and out of the mosquito-infested aspen groves. 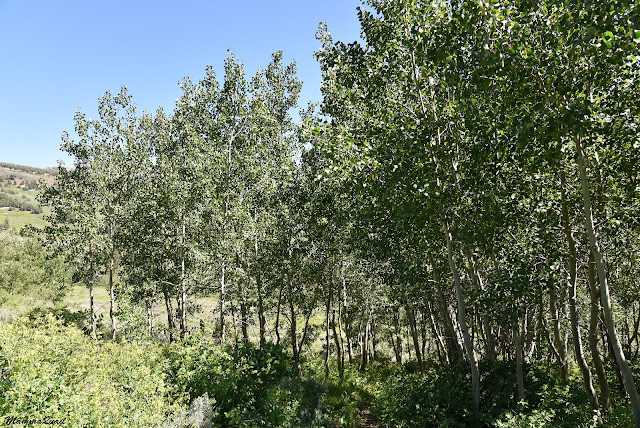 Somewhat lower, and we were back inside the conifer forest, the trail taking us through thin groves and sunny patches where forest shrubs were blooming too.
A colorful patch of mule ears, geraniums, and Indian paintbrush, which filled a large sunny patch marked our arrival at the bottom of the Pine Creek Basin. I remained behind for a few seconds to enjoy the sight, then hurried after my family all the way to the place where we had camped on our first night out. 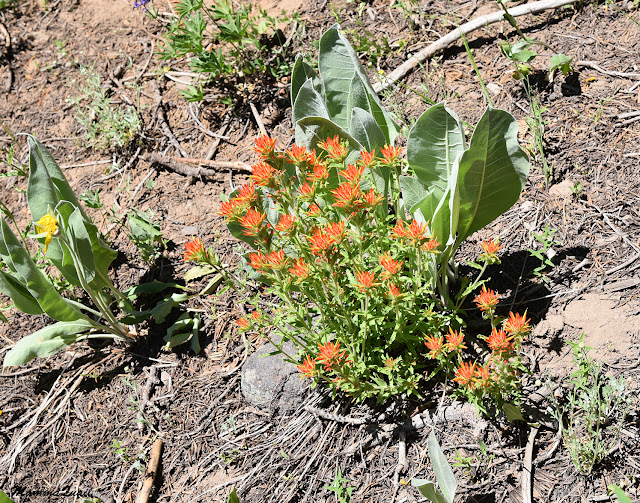 The place was not occupied so we happily set our camp there once again, then went exploring a little. I found another trail in the forest, one that was not labeled on my map. I followed it to a little lake in the woods. We've seen that lake from the main trail on our first day's hike and now I got to see it up close. I returned to the campsite and brought the chikas back there with me to enjoy the nice view. 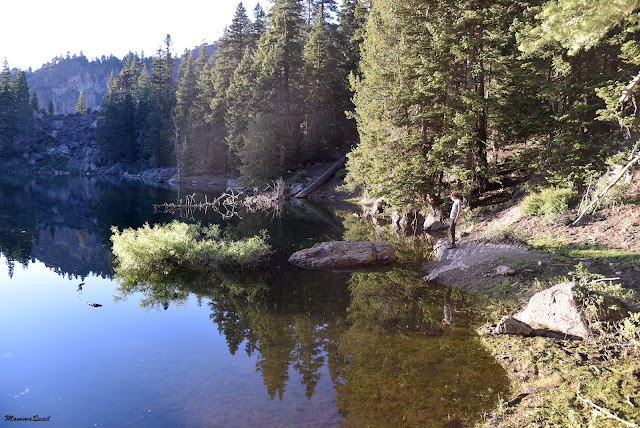 The sun was setting slowly. The chikas got to play by the creek while Pappa Quail and I rested. Then we had a nice, quiet dinner, cleaned up and went into the tent. That night all four of us slept soundly, without any worries. 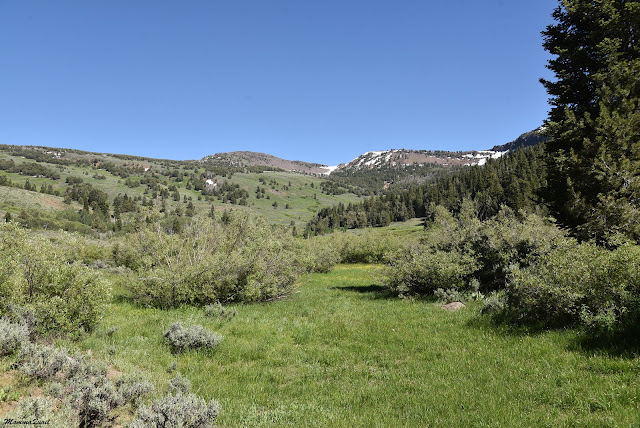