The End of the Run: A Birding Hike by the Mokelumne River

Last November my family went to the Annual Lodi Sandhill Crane Festival again, three years after the last time we participated. As always it was a beautiful, highly educating, and a well coordinated event. Apparently it had also become more popular in the last three years because more than a month before the festival nearly all of the tours I wished to sign for were already fully booked. So we ended up doing tours we had already done before, and had a great time nonetheless. I posted here about this festival on the first year we attended it. This time I post on specific trail we took a tour on last November - the Mokelumne River Trail.
We arrived at the trailhead early in the morning and the air was still cool. The sky was overcast and remained so throughout the hike. Our guide gathered everyone and we descended to the riverfront to take a look. 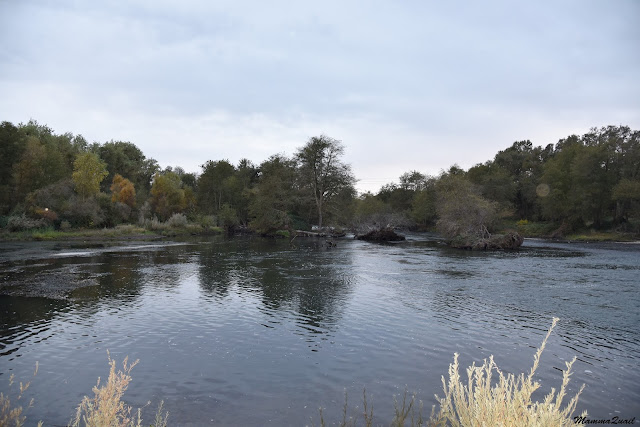 A few mergansers were swimming at the edge of our view. Closer to us swam a coot. Pappa Quail spotted a great blue heron in the nearby vegetation.
This hike marked a birding leap for our elder chika. After years of shrugging it of she finally developed an interest n also photographing the birds, not just sighting and calling them out to us. We gave her a simple point 'n shoot camera and now we had a difficult time dragging her off from the river bank to begin the hike.
The trailhead was a bit further away from the river bank and fr a few minutes we walked with the river out of our sight. Not that there was any doubt where it was - the thick band of willow and sycamore trees were indicative enough. Off the water though, there were different plants. One of them even bloomed. A wildflower blooming at the end of November is almost sure to be a composite -this family seems to have blooming representatives year-round.
Our walk was very slow. While we were not in a large group, near everyone there was a birder and every bird sighting had everyone stopped a a long while until everyone got a good view and several photoshoots. My elder choke fell perfectly in with this bird-photographing group.
Poaaibly the most common bird we saw there that day was the turkey vulture. There were many of them there and on this early hour they were all still sitting in the trees.
No bird is left unsighted when hiking with a group of experienced birders. Soon someone spotted a red-shouldered hawk perched up on a tree and everyone pointer binoculars and cameras in that hawk's direction, as did my chika.
Promptly we reconnected with the Mokelumne River. Gaps in the vegetation allowed us to get right to the river bank. Salmon fish were jumping in the water, but capturing the exact moment other jump had proved quite a challenge. All I managed was to catch the splash eft when the fish fell back into the water.
I didn't expect to see any bloom there but there was some.
One of the wildflowers that were blooming there still was familiar to me from the old world. Sure enough, it turned out to be an introduced species gone wild.
We continued walking slowly up the path until we reached the base of the Comanche Dam. This dam blocks the run of trout and salmon fish to their ancient spawning sites. Nowadays the fish spawning is facilitated by people.
At the base of the Comanche Dam that locks the Camanche Reservoir of the Mokelumne River there is now a fish hatchery facility to facilitate the ongoing procreation of steelhead trout and chinook salmon. 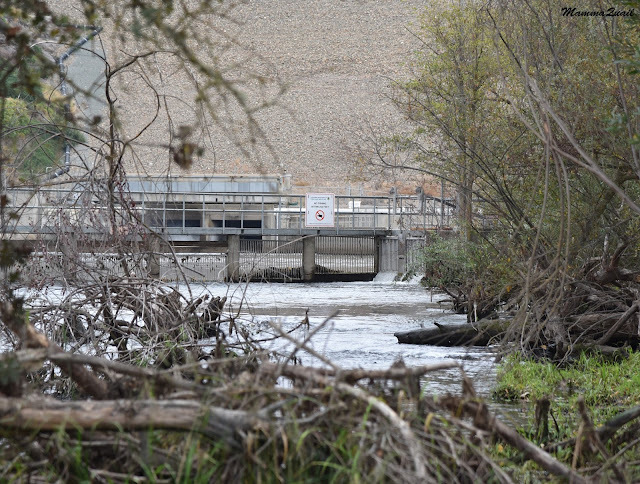 The fish, desperate to get to their spawning site jump rapids and waterfalls on their way upstream, but jumping at the man-made barriers is futile.
And it is also very sad to watch.
At the facility there is a 'fish ladder' which is a passage through which the fish enter and swim up the current to holding pools where they are kept until ready to spawn.
I naively assumed that the fish spawn inside these holding tanks, but our guide soon explained the process to us. The females are kept until they are 'ripe'. Then they are sliced open and the eggs are extracted from their bellies and mixed with semen that was extracted from the males. To the shocked faces of her audience she added that the fish die anyway even after natural spawning. While n one asks the opinion of the fish on this matter, I an only guess what their choice would have been.
While the facility is designed for fish, other animals make use of it.
The fish hatchery facility is open to the public. As expected, there are areas that are fenced off. Small birds, however, have no problem with these fences.

What is done with all the dead fish after the eggs and sperm are extracted from them? The question came up and the guide answered something which I was too distracted to hear. Some of the fish at least, ended up as vulture chow.
After looking around the fish hatchery the guide gathered us and led us through the facility's parking lot to the back road where we started looping back to the trailhead. Oak trees lined along the road. At least three species of oak.
Keeping in mind the purpose of this hike, Pappa Quail ket looking for birds and found them even in the thick foliage of the evergreen coast live oak.

In a certain place the oak trees were whitewashed with vulture droppings, indicating that these trees were the vultures' favorite roost. These trees looked like ghosts and reeked horribly. We moved on at a quickened pace.

It was a short walk back to the parking lot of the Mokelumne River Day Use Area where we had started the hike. The clouds that hung over us all morning begun to drip a light, intermittent drizzle. We completed the hike without spotting any new exciting birds or stopping at any additional interest points. All that time we saw very few people other than our birding group. I should think that the place is more popular in the warm spring and summer weather, but birding-wise, water is its best season. 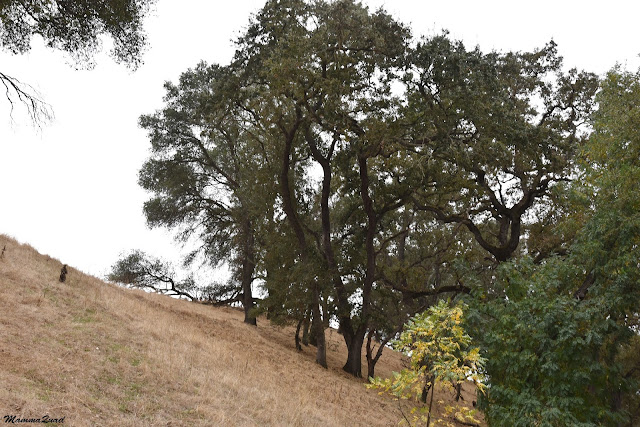 I would have loved to see this place the way it was before the damming of the river, but that is only for the imagination now. The area, lovely as it is today, is heavily man-managed. The river course, the fishery, the vegetation, and through those - the birds.