Among Oaks and Olives: A Morning Hike at Pleasanton Ridge Regional Park

Several years ago when the chikas were still very young all the hikes we could go on were on short, toddler-friendly trails. One day I couldn't take it anymore so I called the babysitter and she agreed to watch our offspring for the most part of a Saturday, so Pappa Quail and I could go on a hike together. It was up to me to select the destination and I picked Pleasanton Ridge Regional Park - a park I had my eye on for some time. I've been back there several times since, but always on my own - the obligatory uphill mile before even getting to the main trail system of the park did not seem to me to be suitable for most of my would be companions. Last Monday, however, I had the opportunity to go on a hike with a friend of mine and once again I chose to go to Pleasanton Ridge.
From the main staging area there's only one way and that's upward. A full mile of ascension by a mildly sloped dirt road or by a shorter and steeper hikers trail through the oak woods. I opted for the dirt road, a wide and convenient path that other than a few oak canopies over it, it is mostly exposed to the sun, and also to the magnificent view of the Tri-City Valley.
It was a beautiful day without a single cloud in the sky. It wasn't hot either, and I was thankful for that because the heat is usually what makes me pass on that park during summer days. In fact, it was quite windy and we kept our sweaters on for most of the hike.
The wind didn't bother the little American kestrel that was hovering above the hillside in search of a branch. The kestrel is a local resident there - I think I've seen it every time I hiked Pleasanton Ridge, and always in the same area.
From the Oak Tree Trail there was clear and magnificent view to the east. I was happy to recognize familiar landmarks and enjoyed pointing them out to my friend.  The small peak in the photo below is Brushy Peak, where I had lead the Redwood 4-H Hiking Project on a hike about three years ago.
A bit around the curve and the majestic doubly-peaked Mount Diablo came into full view on the northeast: the most prominent peak in the Bay Area.
And in the southeast I could see the low ridge of the Ohlone Wilderness, crowned by the Rose Peak. The Ohlone Wilderness backpacking trail is high on my wish list. I hope an opportunity to hike it will present itself in the near future.
Up the ridge the trail splits into a number of loop trails, but the two main ones run on the north-south axis east of Kilkare Canyon. Falling into my already established habit we started walking up the eastern route - the Ridgeline Trail.
One of the most striking sights on the ridge are the beautiful orchards of old olive, well over century old trees. These orchard were planted and are still owned and tended by The Hillcrest Ranch in Sunol. 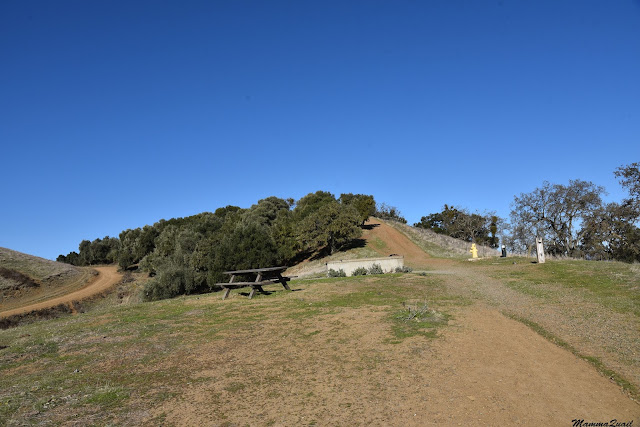 Having grown up in the Middle East, olive trees were a very prominent part of my childhood surroundings and the olive folklore makes a good bulk of my folklore and horticultural knowledge. I do consider olives to be the most beautiful trees. The soft spot in my heart aside, here in California olives are exotic and out of orchards are also an aggressive, invasive species.
(Having said that, I also admit to planting an olive tree in my own yard in the hope of owning a bit of this beauty (and of uncured olives) myself sometime in the future ... )
Our view from the Ridgeline trail was mostly to the west where it is mostly of the Sunol Ridge, but every now and then there was enough of a gap between the olives and the oaks to allow a clear view eastward, or down below to the foothills. One doesn't need the written signs to tell that much of the park's area is also leased for cattle grazing.
We also had now a full view of the City of Pleasanton, home of the Alameda County Fairgrounds. In the backdrop - the Morgan Territory, another beautiful hiking area.
We walked at a steady pace up the mild slope of the Ridgeline Trail. There were many western bluebirds and house finches flying and chirping all over the place but none would stay put for me to photograph.
Fortunately the toyon did. All dressed for the winter holidays the red-berried toyon looked very colorful and festive next to the dark live oaks.
Most of the oak trees we saw were live oaks that were growing on the slopes. The ridge itself was almost bare of trees except for the olive orchards. Here and there though, stood a large oak tree - the grand Valley Oak, now almost bear of leaves and ready for winter.
As we walked up Ridgeline Trail I kept looking west to the Sunol Ridge. That area looked very inviting but is all private property. The north areas of Sunol Ridge and of Kilkare Canyon are within the park and at least on the map it looks like a wonderful place to get lost in the wilderness. But I haven't had yet the opportunity to hike there - another wish I hope to fulfill in not loo long.
Even on this hike with my friend we had to turn round before I was mentally ready to go back. We had no choice - both of us had offspring to pick up from school. We arrived at one of the little eat-west trails that connected the Ridgeline Trail with the parallel Thermalito Trail and started back southward. On the horizon to the right there was another prominent peak which I believe to be Mission Peak, but I'm not sure about it - from this side it doesn't show its characteristic pyramid top. 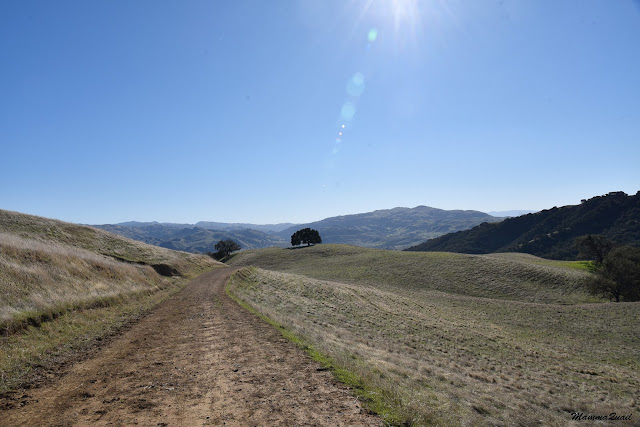 Now we were going downhill. Mostly. The Thermalito Trail runs just beneath the ridge and along t there are several cute nooks with cattle ponds and lovely oak trees. 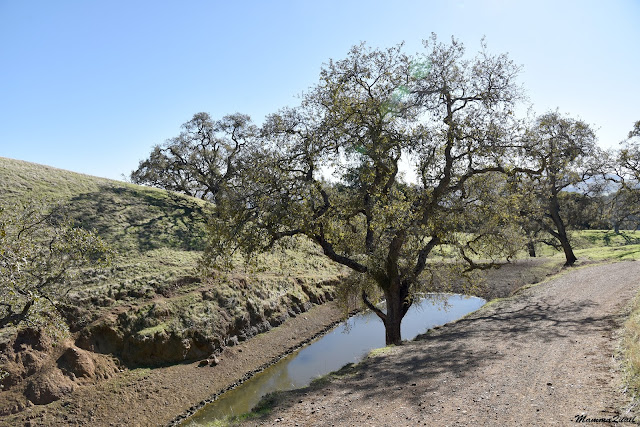 This trail isn't straight and monotonous but dips and rises. Generally, however, we were going back down, what made our pace considerably faster. 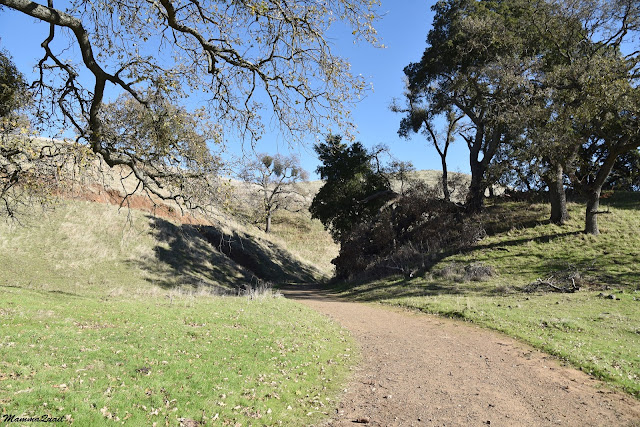 There were vultures circling over us from the beginning of the hike, but as the day warmed up and wore on there seemed to be many more of them in the sky. And they were also swooping much lower and closer.
I suggested to my friend that we should lie down and pretend to be dead in hope that they's land near us but strangely enough she declined. We continued south and at some point Sunol came into view below.
I don't get to hike with friends all too often so this hike was a special treat for me. A lovely day, a good friend, and a beautiful park. What could be better? If we only had some more time to spend up there. But we needed to get downhill and back to our children. 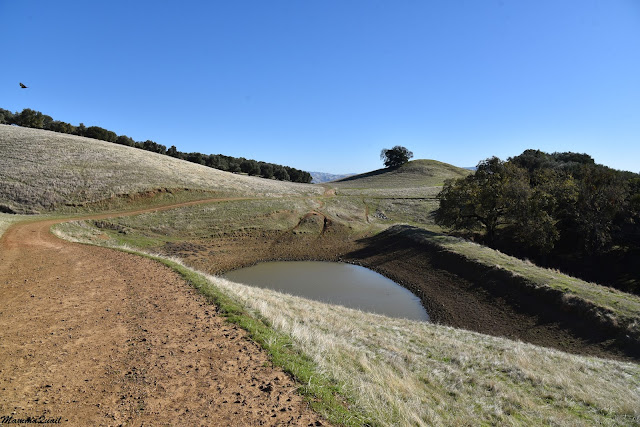 One vulture dropped from the air and landed on the slope over our trail. It was a bit far but I photographed it nonetheless. As we were watching, another vulture landed next to the first. I handed my binoculars to my friend so she could get a better look at these interesting birds. Meanwhile, a third one came down, then a forth. By the time we finally moved on there was a committee of nearly ten vultures on that slope. And all of them were watching us keenly. I suppose they wondered if we're about to kick the bucket.
Back near the first olive orchard but still on the Thermalito Trail we heard an animal's warning cal. It was a ground squirrel at the mouth of its burrow. It kept on calling all the time we were watching it and eventually I videotaped it.


At that time I also paid a closer attention to the olive trees. There were two kinds of olives there - large, still partially green olives, and small black olives. The large olive trees appeared to have been harvested already and the leftover fruit were all holed by some larvae. The small-fruited olive trees however were still laden and the olives looked in top shape. I rubbed and sniffed them, inhaling the rich smell deeply.
We also rested there near the olives for some time. We didn't have very long but it was a well-timed stop. The view was simply gorgeous. My photos really don't do it justice.
A closer view showed many more olive trees but not planted neatly like the orchards we were passing but dispersed like an oak woodland. Between them was a small brown building, possibly a farmhouse or a EBRPD building. A single bull road slowly between the olive trees. Were we somehow transported to Italy and I didn't notice?
Once we were back on the move we were out of the Italian fantasy and back into the California dream. To get all the way down we now walked the narrow hikers trail - the Woodland Trail.
Properly named, the Woodland Trail runs mainly inside the forest but every now and then it breaks out into the open. On one of these occasions we had a nice view directly eastward to the farmlands of Sunol. We looked upon what seemed to be a farm with a few large silos standing out. I wouldn't think twice about it - just another farm - but a sole hiker we had encountered on our way down had told us that that place was the site of a now decommissioned nuclear power plant.
Back home I looked it up and indeed - the Vallecitos Nuclear Power Plant was built there by General Electric in the late 50's and it was decommissioned in the early 80's. Decontaminating and cleaning of the nuclear waste was completed only in 2010.
Just as interesting - from that point of view I could see the double Maguire Peaks that mark the northeast part of Sunol Regional Wilderness. These double peaks are prominent and unique in their shape. They mark for me the nearing of home whenever we come back from traveling from the north along 680. It was only last year that I had the chance of checking these peaks up close.
The rest of the way was quick. The trail steepened and switchbacked until it connected withe the Oak Tree Trail near the bottom of the hill. In springtime there would be flowers along the trail but there were none to slow me down this time. 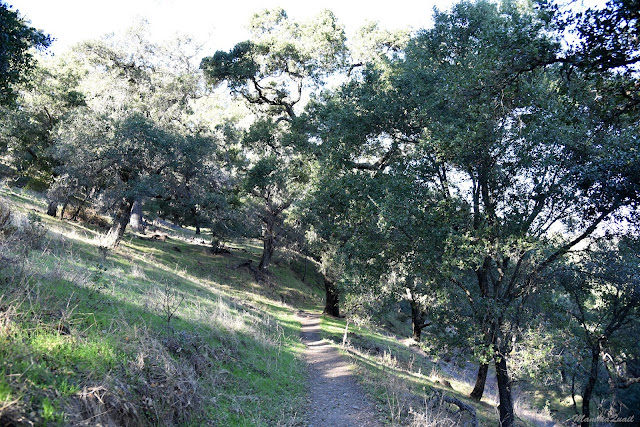 We made it to the staging area with very little time to spare but we were not worried. We were relaxed and happy and ready for the rest of the day.