Around the Round Hills of Round Valley Regional Preserve 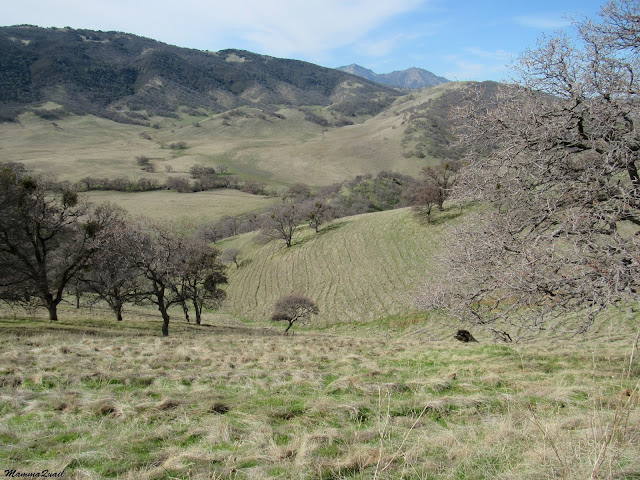 A couple of years ago a fellow member of the California Native Plants Society posted online photos from Round Valley Regional Preserve. Those photos were taken early in the morning and featured oak trees in the mist and dew drips hanging from leaves. I promptly added Round Valley to my hiking wish list.
This year I realized that to make this wish happen I needed some sort of commitment. I therefore added Round Valley to the list of hikes I planned for the Redwood 4-H Hiking Project that I lead. Comes February, and I dedicated a morning for a solo prep hike. Five days later I was there with the group. Most photos here are from my solo hike on February 5. The others were taken on February 10 during the group hike. Pappa Quail did not join us this time, but my elder chika is now a full-blown birder and is becoming better at taking wildlife photos with every hike. I included here some of her photos too.
Below is a mockingbird that my elder chika photographed by the parking lot.
A wide cement bridge across Marsh Creek leads to the main trailhead. There it's a dilemma: left or right? I turned left and started along the creek. 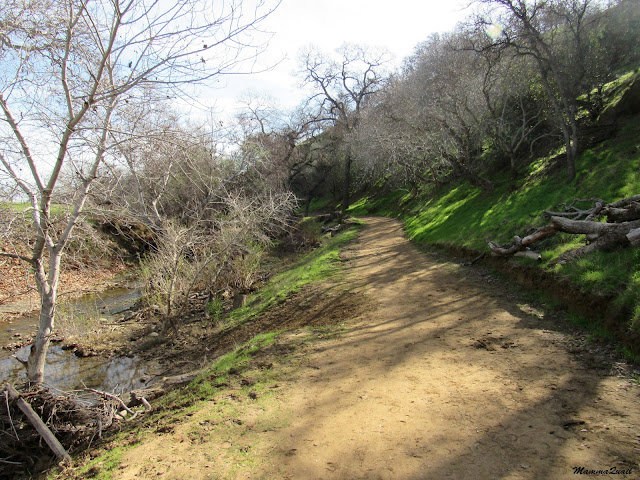 There are many oak trees at the Round Valley preserve, and nearly all of them deciduous. I was walking by completely naked trees. The buckeye trees however, were budding their leaves already.
The trail I was walking on leads away from Round Valley itself. Going on - it leads to what looked like a small farm area.
Not too far from the farm boundary the trail shifts westward and starts a mild ascend on the hill. The bottom part of the hill is holed through by ground squirrels. On the 4H hike my chika captured a photo of their wary sentinel.
The slope of the trail was mild and almost without noticing I was high enough to have a nice view of the low hills to the east and the farm below. 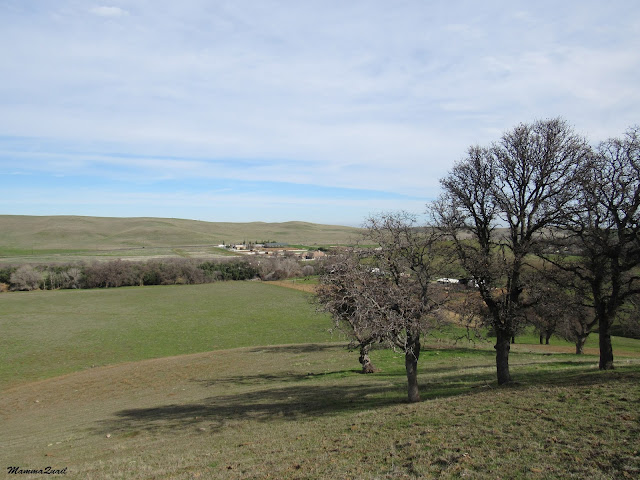 I continued on and before long I was walking into and up the narrow canyon of High Creek.
A fellow hiked who was coming down the trail told me that there were buttercups blooming - spring was coming! I found them a bit further up the trail.
I have lived long enough in the East Bay to know their chameleon-like colors change with the season. But it never ceases to amaze me. The intense green all over was was wonderful to see.
At that point I haven't yet seen the Round Valley itself but the hills were round enough - round and soft-contoured. Here and there though, the rocky bones of the hike were exposed by the curving creek. 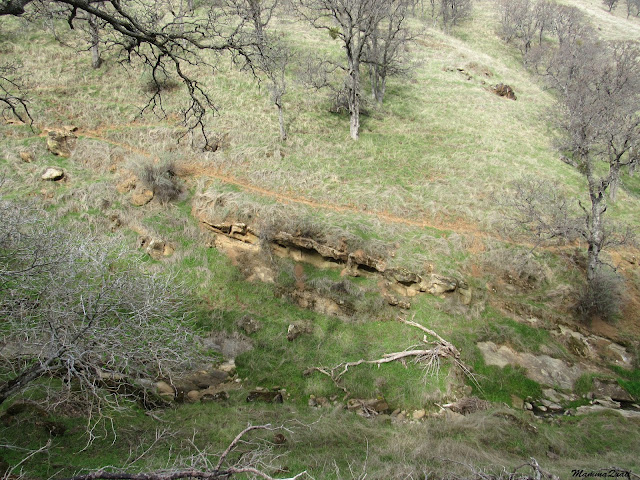 I would have loved to see the creek running with water but the rains up to that day were not sufficient. Perhaps next time I could see the cascades of High Creek.
The hike from Marsh Creek to the highest point of Hardy Canyon Trail is nearly two miles long. The grade isn't very high but the constant ascend can be tiring. On my solo hike I kept a steady and continuous pace but with the 4H group we stopped about two thirds of the way up for a short break. 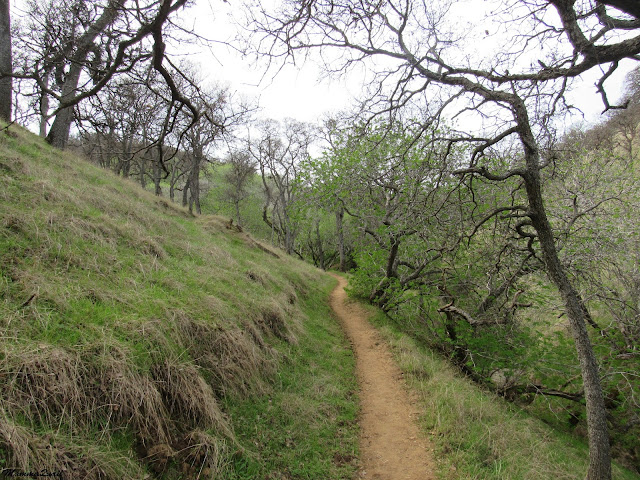 While the youths snacked and chatted I found a pretty buckeye sprout to appreciate.
Rested, I prompted the children back to their feet and we moved on upward. At its higher part the trail became somewhat steeper. It also left the wooded canyon. All of a sudden I had view :-)
Th trail leveled again. The green scene was broken with red algae covered rocks in the field. 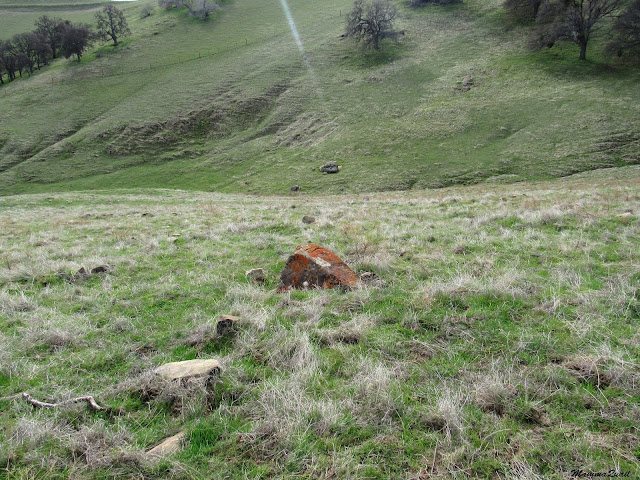 Red stands out really nicely against the green background. Even if there's not much of it over all, it catches the eye immediately.
The trail I selected for the hike doesn't go into Round Valley itself but circumvents the large hill southeast of the valley. The trail brought me to the highest pass around the hill and I could see ts summit to my right. A few cows were grazing on the green slope. One of them stood apart from the rest, way up the hill. 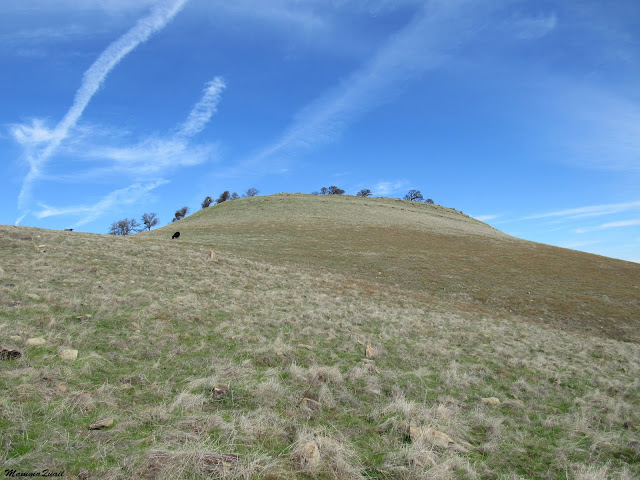 Over the pass i finally got to see Round Valley itself. I guess that with some loose geometry it can be taken for round. I was quite excited to see the double peaks of Mount Diablo peeking behind the next ridge.
It was quiet and empty down below. I saw no people there, only cows. On Saturday of February 8 there were more people in the park but the valley was still fairly vacant of humans.
I started downhill. The descent into the valley was much steeper than the way I came up on. There were a few switchbacks to the trail and in the corner of one of these switchbacks a large valley oak was growing. It is a deciduous tree and its buds looked ready to pop. I photographed its budding branch on February 5.
Three days later the young leaves were out, heralding spring.
On a similar branch of a nearby oak perched a bluebird. My elder chika documented the pretty bird as we walked by. He didn't seem to mind one bit.
I walked down quickly. On my decent I passed the exposed rock face of the hill. These rocks were nicely weathered and had many crevices and holes. I was told by another hiker I met along the way that this area used to be a Miwok trading place. He was looking for relics. I just enjoyed the rock formations.
As I moved down and around the hill the view north opened up. I couldn't see the Sacramento River itself but I could see the area north of it. It was covered with those ugly wind turbines.
The near view was prettier: beautiful ak trees on a beautiful sky background. 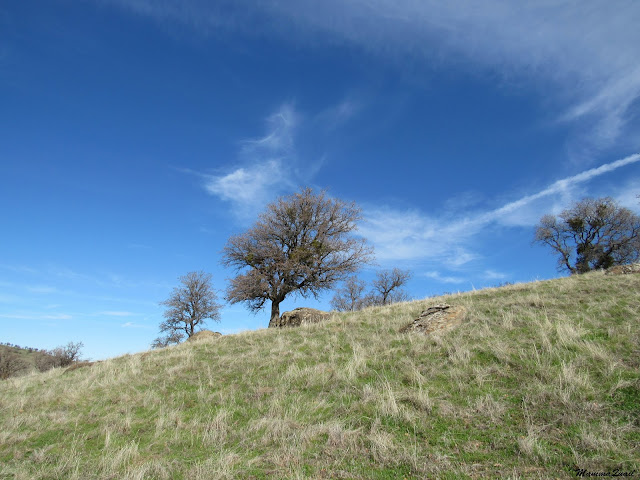 I encountered more cattle on the way down. This time - bulls. Contrary to their reputations bulls are the least likely to be aggressive of all cattle. They didn't experience having their calves taken from them and they didn't experience the pain of castration. Calm and indifferent the bull went on with his lunch as I walked by.
At the bottom of the hill the Hardy Canyon Trail connected with the Round Valley Trail. This path was much wider and it was apparent that every now and then it serves farm vehicles. 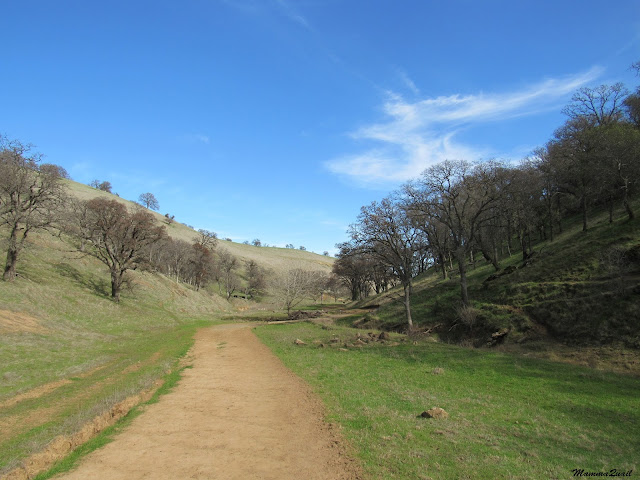 There was a small bridge across the creek and a few small rocks near it. A air of wren were jumping and making funny dance moves on top of these rocks. My chika caught one of them on camera.
On February 5 there was still a thin trickle of wate flowing down Round Valley Creek. By February 8 it was dry. On my solo hike I took a narrow hikers trail that rose somewhat above the creek. i got a nice view of the thin water line from there.
There, vining around the small undergrowth bushes I spotted another early flowering plant - the California man-root. 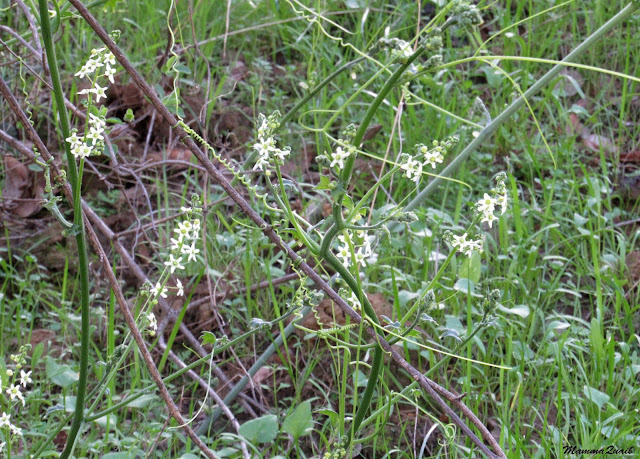 
From the upper trail I could see the white limestone layer just above the creek, standing out like a scar. 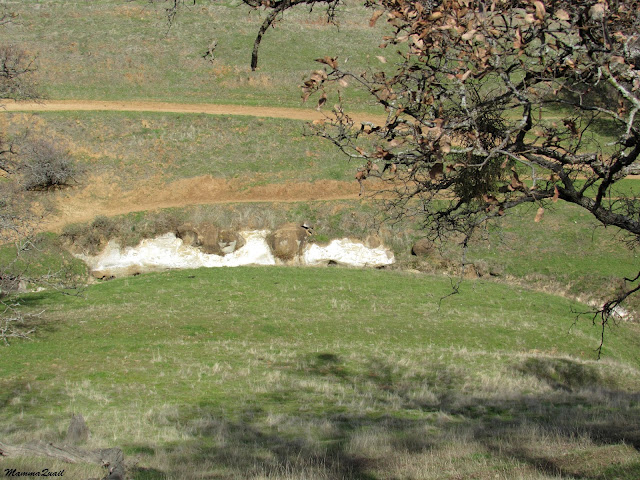 On the 4H hike three days later we were walking the wide, lower dirt road that followed the creek much more closely. 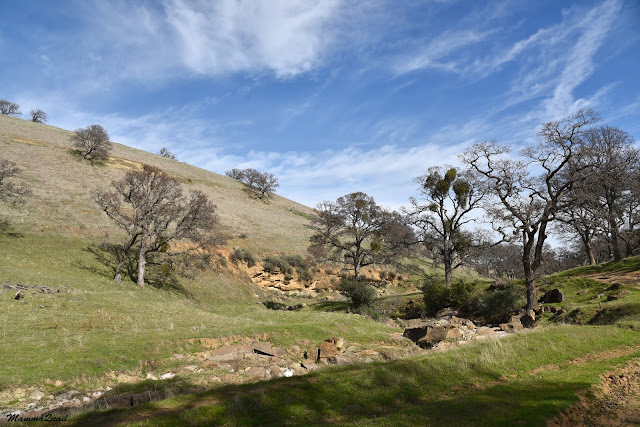 Nearing the end of the hike the trail curves up the hill and then down again. We took a lower shortcut that run near a fence - possibly the fence of a farm on the other side. There was an agriculture field over below, and beautiful- blossomed almond trees right at the fence. They are invasive plants here but their bloom smells wonderful.
The complete loop we hiked is about 4.5 miles long but it feels much shorter than that. Almost without noticing I was back at the trailhead and the bridge over Marsh Creek where I started. 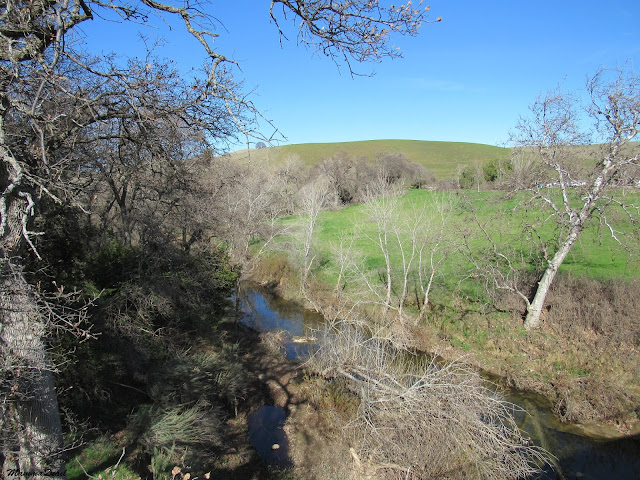 That would have been the end of excitement for the group hike too but my elder chika made a discovery: inside a hole in the ground, very close to the parking lot, was a large toad. We all crouched near the hole to appreciate the amphibian, who didn't even flinch.
I got to check Round Valley Regional preserve on my list of wanna do hikes, but there is still much to see there. So this park is now on my list of wanna go back to hikes :-).