Majestic and aloof, Mount Diablo stands alone in the Bay Area scenery. Not the highest peak, but it sure looks like it, so prominent a rise over its surroundings. From its summit the view is vast and far (when weather and air quality allows), indeed its double-dome can be seen from great distances. No wonder that the Native Californians of this region believed that Tuyshtak (Mt. Diablo in Miwok) was the place where the Earth was created.
Now a State Park, Mt. Diablo area has an extensive trail system, most of which is quite strenuous, so when I looked for a nice trail to take my family hiking group on I figured we'll hike it in one direction only - downhill.
Once arriving at this decision choosing the actual trail was easy. We would hike down the mountain's western slope from the Juniper Campground to the North Gate Rd.
On November 1 I went there on a solo hike. 4 days later I was there again, this time with my family hiking group. The photos posted here are from both these hikes, each labeled with the date taken.

Deer Flat Rd begins at Juniper Campground. True to the name, there were many junipers there, all bearing little gray-green 'berries'. It reminded me of the time when my elder chika was only 18 months old and we went camping at the White Mountains and as I turned back from pitching the tent I saw my baby munching on juniper 'berries'. Naturally, I freaked out. Since then I learned that juniper 'berries' (which are , in fact, cones) are not poisonous (they are actually used as spice). Still, they are of the wrong size and consistency to be baby food and forever I will remember my panic of that day.
The high part of Deer Flat Rd is mild, descends softly between juniper bushes, open grassland, and exposed rocks.
Wherever the rock face was cut the deep rust-colored layers of the Franciscan chert, which is part of the Franciscan melange which dates back to the Jurassic era, making the oldest rock core of Mount Diablo.
On the first morning of November, 2016, Mount Diablo was under a thick cover of clouds. And not just the mountain but all the area below too.
So basically, all the clear view I had was of the slopes just below me. 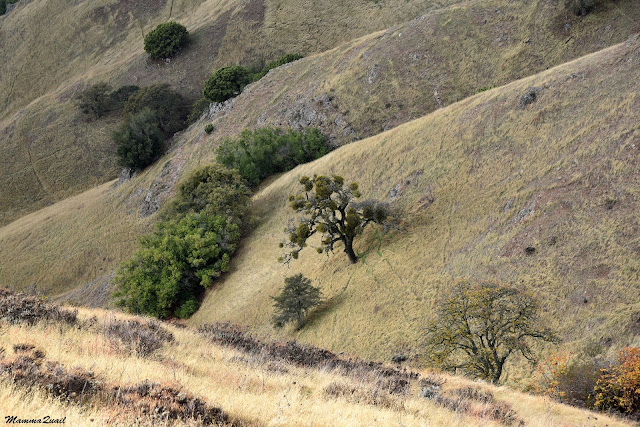 As I slowly turned to the north I could see the cloud's edge and blue sky with brilliant sunshine over the lower lands. Even the Quarry at the edge of Mitchell Canyon was under the sun. 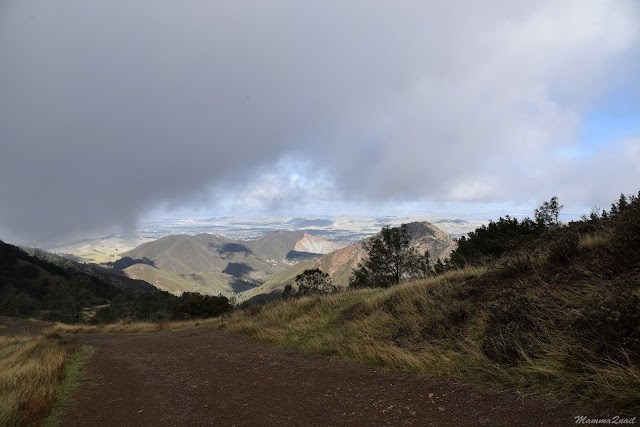 With every step the fog lifted, little by little. 'Lifted' may not be the best verb to describe it. More like, 'dispersed' or even, 'burned'. More of the view below was exposed, including the eye sore of the wind turbines north of Suisan Bay.
Deer Flat Road runs a fairly mild slope higher up. It drops for a short stretch, then continues almost level. It didn't feel like much, but after less than a mile I had lost some considerable altitude. 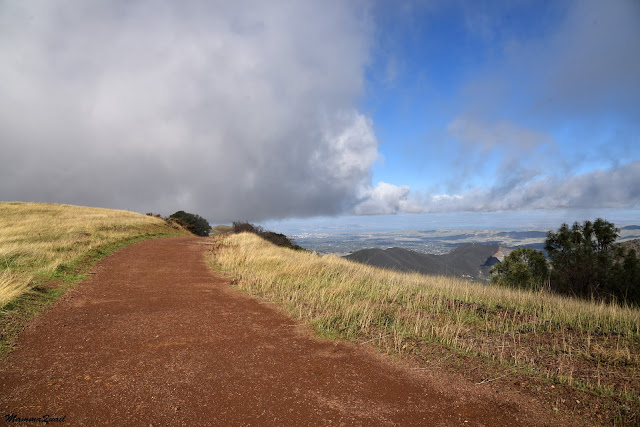 While I was still quite high up yet, I seemed to have made it below the clouds. Or that the clouds have risen higher, possibly.
It was still along way down.  I could see the trail winding below me, cutting through the grass that covered the southwestern slopes, moving in the wind like fur. 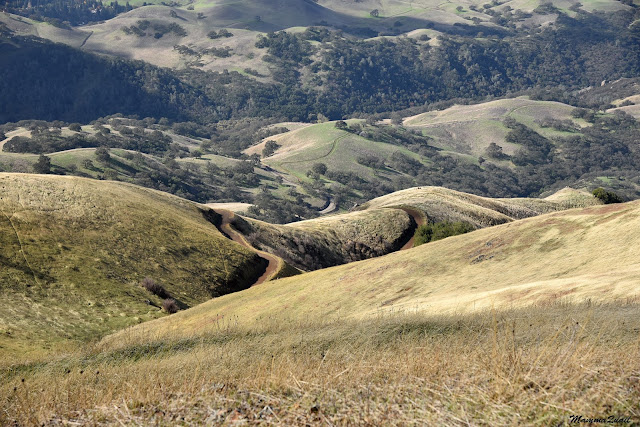 Almost without notice, the clouds were nearly gone and bright sunlight washed the slopes. Here and there a small grove of trees leaned their canopies over the trail, providing shade. The shade I might have welcomed on warmer days but on that hike I was actually feeling cold, so I passed quickly through the shaded tree tunnels. 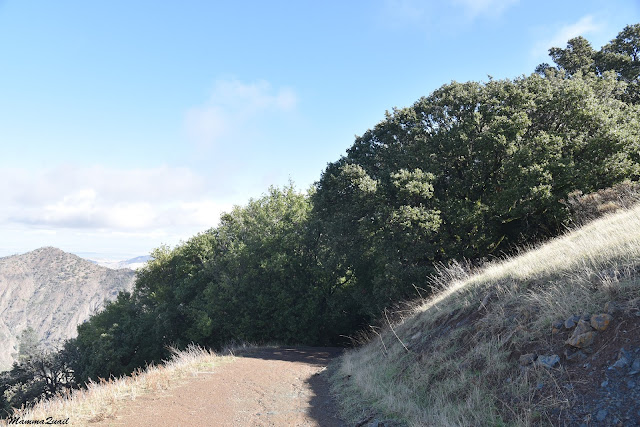 Despite my relatively quick pace I was paying attention to details along the trail, not only to the vast views below. That's how I spotted this deer skull in the grass. Georgia O'Keefe came to my mind, but I'm no painter.
Further down the trail, in a soft, muddy patch, I saw deer tracks. Mount Diablo is deer haven. While I didn't see any on that particular hike, I did see many evidence of their presence. I do see them often enough on my East Bay hikes.
It was early in November but the rains have already started, heralding the rainiest California winter in recent years. Responding to the rain, new green was apparent everywhere. Mostly grasses and annuals' sprouts, but also other plants - such as this wallflower rosette, nestles between small rocks.
The slope became steeper. Soon I arrived at a junction - ahead of me was the Burma Road, making a milder descend to the N. Gate Rd which was my destination. It also lead to the Moses Rock Springs site that I wanted to see. To the left - a steep shortcut to Angel Kerley Road - a lower extension of the Burma Road. I didn't have the time to take the long way, nor did I want to take the families there on the group hike, so I went forward on the Burma Road only to Moses Rock Springs, then headed back to the trail junction to take the shortcut down. 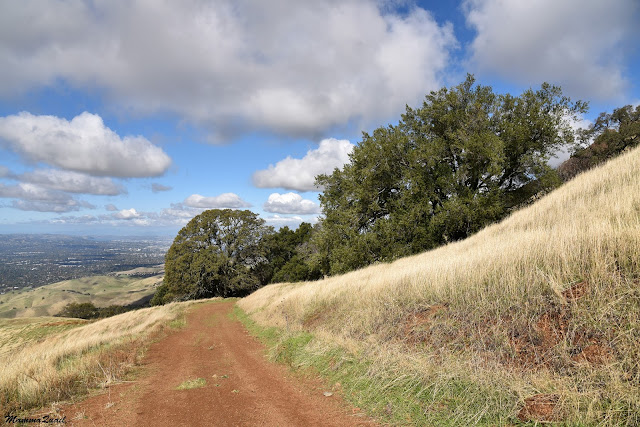 The biblical story tells how in the desert the thirsty Israelites demanded water from Moses and how he whacked a rock with his staff, creating a spring of fresh water for them. I don't know if the name of Moses Rock Spring was inspired by that story but there sure was a big rock there, and the spring water came out of the ground right at the bottom of that rock. (Yes, I did go all the way there to find that out.) The water flowed a little above ground but mostly muddied the soil downhill of the rock.
Near the trail the water was pulled out of the ground and led by a pipe into a round cement basin surrounded by a wet area where rashes grew.
In that basin I found the least likely animal for Mount Diablo - goldfish. Placing fish in fresh water basins is a practice I'm familiar with - a natural approach for mosquito abatement. However, I have never seen goldfish in this job before. 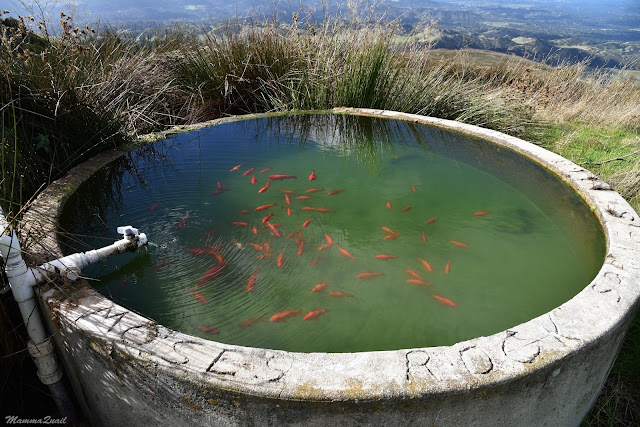 As I mentioned above I walked over to the rock to explore a bit. The rock was of the Franciscan melange typical of the high region of Mount Diablo. It was nearly devoid of plants and those that did stick out from the cracks were dry. At the rock edges it was a different matter. The presence of water was very evident in such greenery much larger than early winter growth. There were also some flowers there, to my surprise.
I partially climbed the rock. The view from there was fantastic. i felt very high indeed.

From Moses Rock Springs I turned around and walked back up to the trail junction where I turned onto the shortcut that's called Mothers Trail. 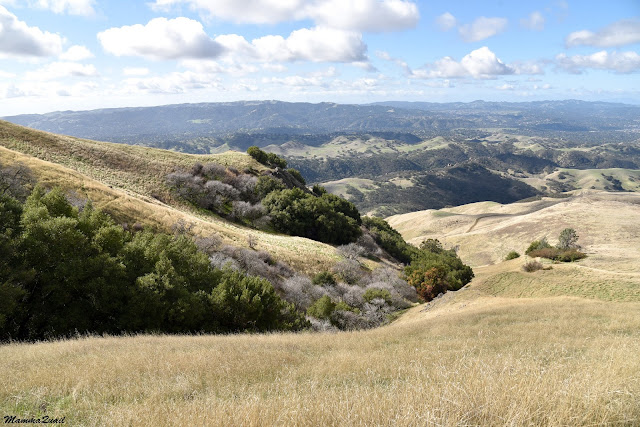 On the pole that marked the trails intersection perched a bluebird. I managed to get a recognizable photo of him before he flew away.
Near the intersection, a bit off the trail was another round cement basin filled with the local spring's water. It too was populated with goldfish. 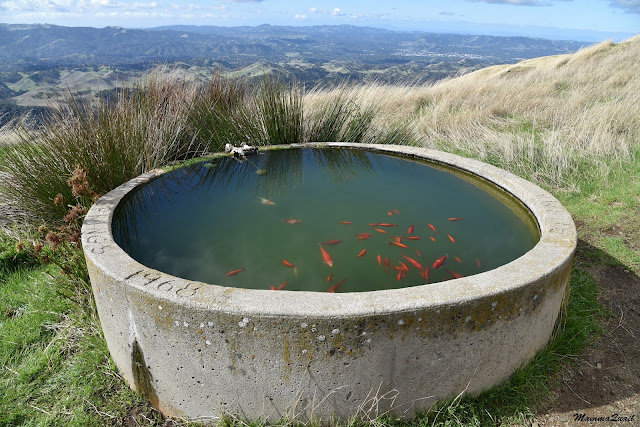 I started down Mother's Trail. This trail is short - less than half a mile, but it was the most challenging part of the hike. It is very steep, and has loose gravel on much of its length. I had to walk there very very slow even with the aid of poles. A few days later, my family hiking group was struggling with that very same trail segment. Some resorted to butt-sliding part of the way, as I would have done if I had no poles. 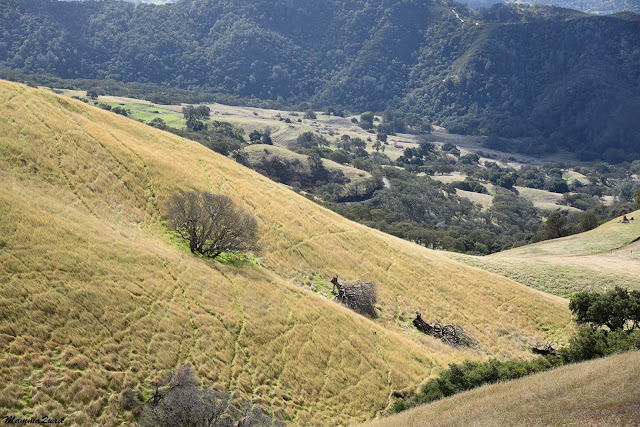 Down on Angel Kerley Road I took a break to give my aching knees some respite. I found a lovely spot with nice rock piles to sit on and admire the view. I was much lower now, and the day had turned warm so I took my sweater off. 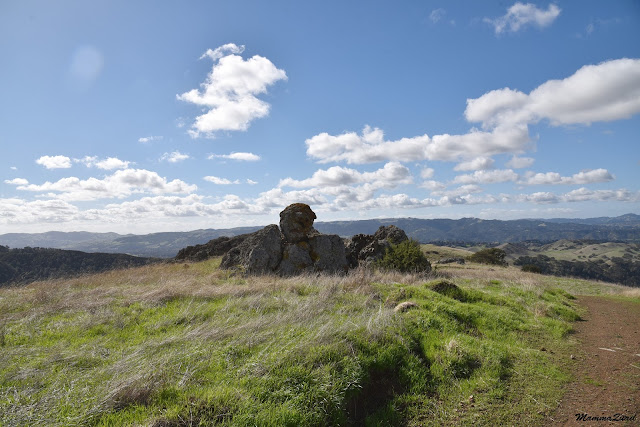 I thought this would be a perfect place to fly kites, so on the family group hike I brought dowels, plastic sheets, kite string, tape and markers. The children got busy with the help of their adults, and soon we had a flock of kites in the air. I remember this as one of the best children time we had on our family hikes.
Some more tracks in the mud on the trail - this one canine. There were no adjacent human trails and the paw prints seemed to have continued from the nearby grass. A coyote perhaps? 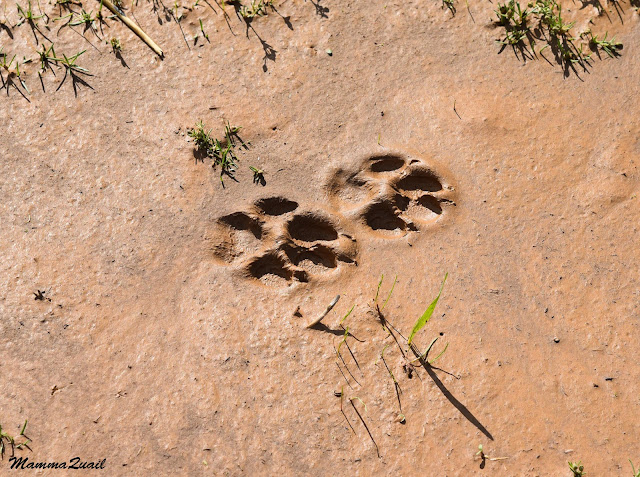 More signs of early winter - soap plants growing their leaves from between last year's dry fibers.
Before long I was down by the road. My plan was to walk the narrow trail that paralleled the road further downhill but on my solo hike my time was up. If I wanted to be home on time to pick up the chikas from school I had to finish my hike there and catch a ride back up to Juniper Campground where I had parked.
On November 5 we had no such time limitation so I led my group northward along that narrow trail. 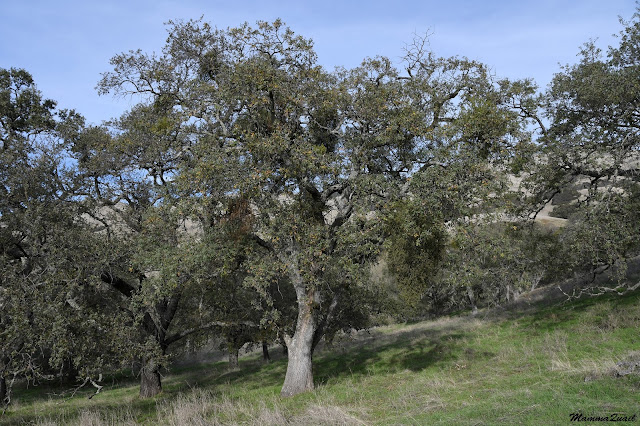 This trail was nearly level, and after the long descent down the mountain it came as a much welcomed relief. 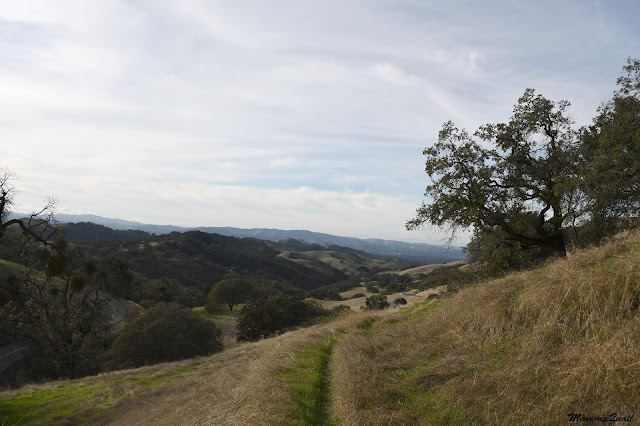 We were hiking in open grassland still, but there were more oaks along our path. Some stood alone and aloof. 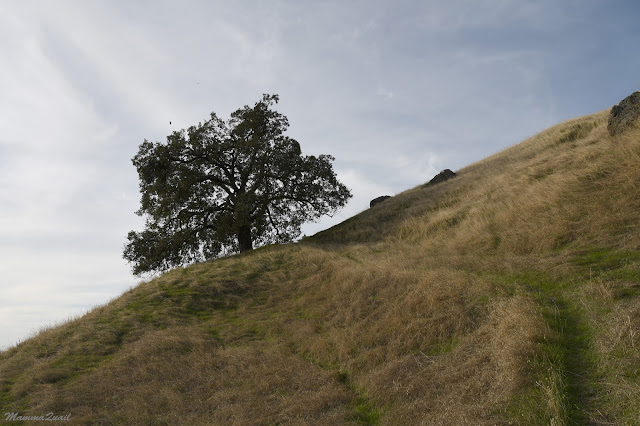 Other oaks were in small groves or a loose forest. 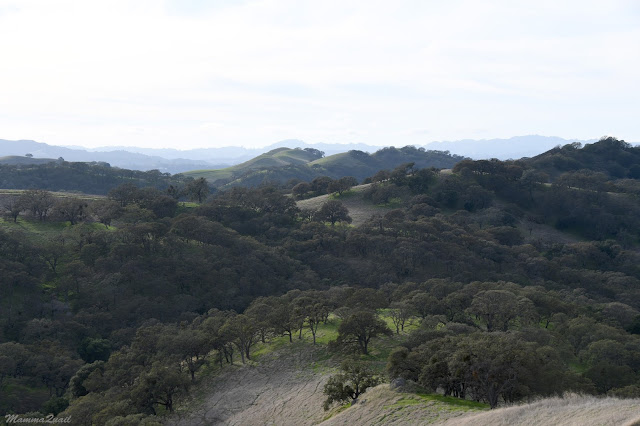 It was also the first place where we saw running water - other than the very short trick at Moses Rock Springs. 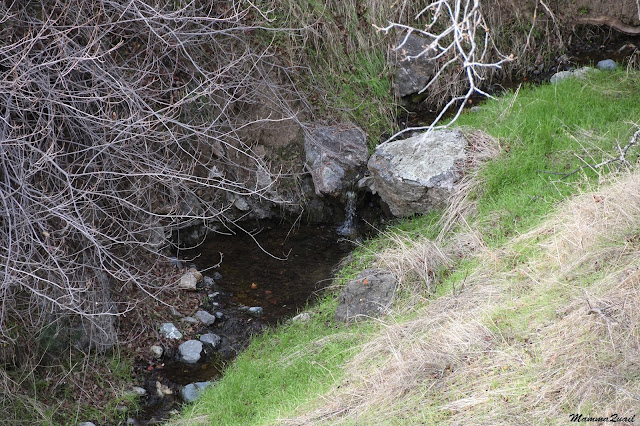 There were more rock piles along our path and in one place the rocks proved irresistible and within seconds all children mounted them. It was also the breaking point of many hikers in the group who felt too tired to go on. They chose to remain by the rocks, which were close to the road below, while I led an adult representative from each family plus others who felt good to keep on, and we continued down the trail to my parking spot. 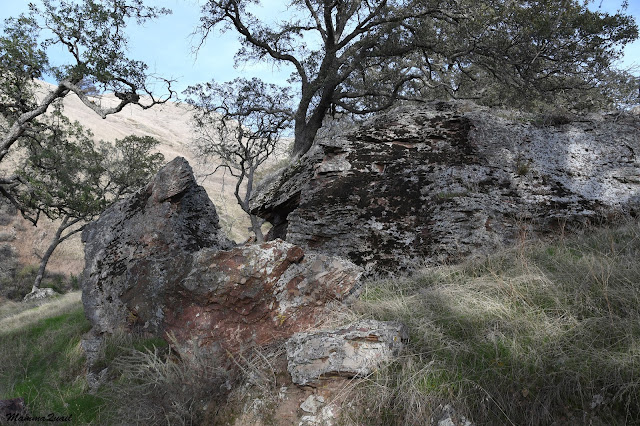 With a smaller, more fit group we made quick pace. I didn't stop to photograph but snapped shots while walking. Some even came out right :-)
At one point I caught a glimpse of yet another round cement basin, almost hidden in the thick vegetation. I took a few steps toward it to confirm: it too was filled with spring water and populated with goldfish. I must say that the goldfish were quite an attraction for other children in the group earlier on.
A bit further down the trail I did pause briefly to allow everyone to catch up to me and also to photograph a few freshly sprouted mushrooms. The earth smelled rich and thick. I love the early winter awakening in the East Bay! 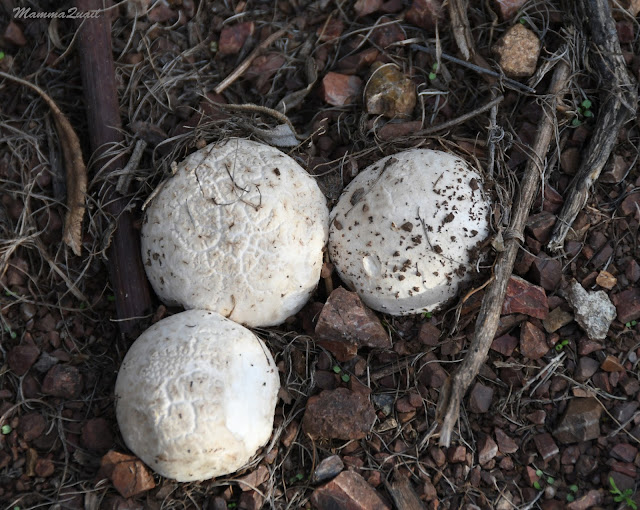 On the last part of the trail we were walking through low chaparral, brushing against sage and sagebrush bushes. We arrived at the road again right at the place where I have left my car. The key-wielding adults crowded my car and I drove up to Juniper Campground where everyone else was parking. I watched everyone disappear into their cars and followed them back down to where everyone else was waiting where we had left then near the rocks. They waved to me as i passed by slowly. Tired but beaming faces. It was a lovely hike in a most gorgeous park.