This loop - the Dipsea/Steep Ravine/Matt Davies Trails, I hiked with Pappa Quail way back when before we became parents. Since then I came back to that area many times but only to hike the Matter Davies Trail which makes half of that loop (the downhill half :-) ) from the Pantoll Station to Stinson Beach. When my hiking group asked for a more challenging trail than those I normally take them to I thought it might be a good chance to do the complete loop again. Nearly all the photos here I took on my earlier solo hike, with a few added from the later group hike, including the bird photos taken by Pappa Quail on that day.
Because there's nothing better than finishing a good hike on the beach, that was also my starting point. I parked at the beach parking lot, then took the small connector trail to the Dipsea Trail trailhead. This connecting trail wasn't easy to find because there are many 'unofficial' trails that lead into the bush thicket and disappear there. 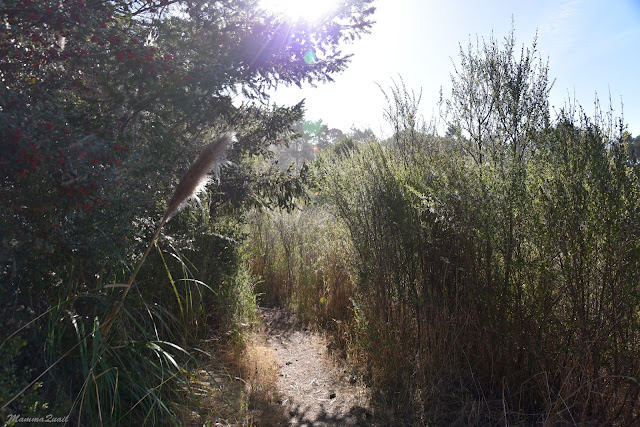 This trail leads from Stinson Beach to the Pantoll Road some distance above the intersection with Hwy 1. Across the road, almost hidden in the brush, is the Dipsea trailhead.
For a short distance the trail climbed through a grove of gnarly and twisted oaks. 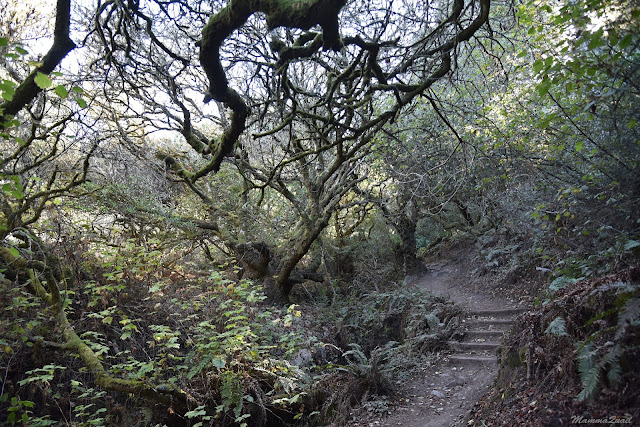 I was duly impressed with the lacy look of the twisted canopy. It reminded me of the pygmy oaks of Los Osos Elfin Forest. 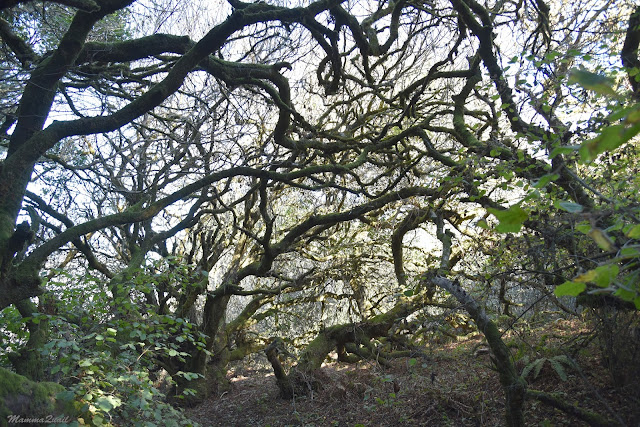 Two weeks later Pappa Quail saw a chickadee in the trees there.
Coming out of the oak grove the trail cuts through thigh-high chaparral. Many poison oak bushes grinned at me from the trail side, sporting their shiny red fall foliage, but the trail was wide enough to pass without touching any.
But the reddish leaves of poison oak were not the only red color I saw there. Further off the trail there were two bright red Indian paintbrush plants. 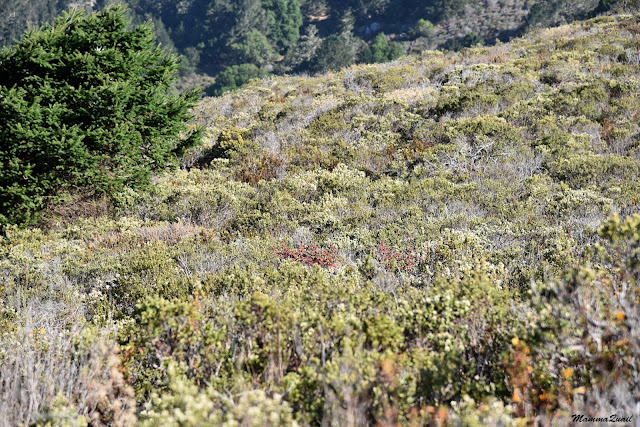 I didn't expect to see much bloom so late in the season, but there was some. In the chaparral were also some monkeyflower blossoms.
Little sparrows chirped as they flew in and out of the bushes, occasionally pausing atop one or another. I wasn't successful in photographing any but Pappa Quail was.
I kept a slow and steady ascend. There trail there has a very mild slope and only when at some point I turned around to look back I realized how much altitude I had gained. Stinson Beach was way down below.
After about a mile of mild slope on the Dipsea Trail I turned left onto the Seep Ravine. This trail follows a deep and fully forested, well shaded gorge. Although late in October following yet another drought year, the creek was still running a low stream. At the bottom the water collected into a small, dark pond.
The pond was very calm and quiet, without any apparent flow or ripples of water life. The dark bottom and calm surface turned in into a perfect mirror. 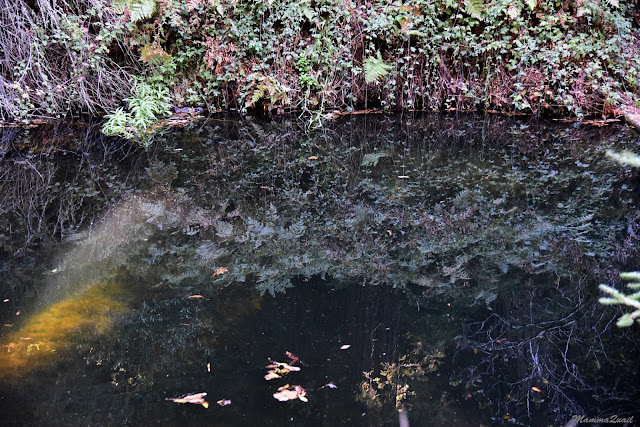 The Steep Ravine Trail is true to its name. Soon after making the turn the trail started climbing at a much steeper grade, including staircases of wood and dirt.
I was surprised at the number of fallen trees that barred the trail. Clearly they were lying there for some time and not recently fallen. In most cases I could hop over or limbo my way under them, not having to circumvent around them on the slope. 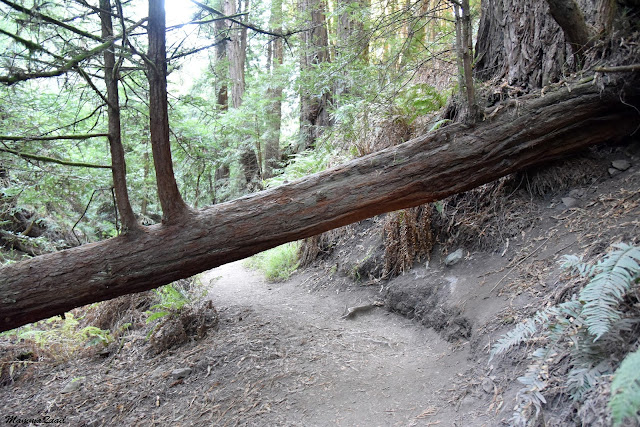 As I climbed higher I left the oaks behind me, below. The forest was now mainly of conifers: fir and redwood.
Whenever the earth under the forest was exposed it revealed the hard graywacke rock that dominates this side of the mountain. The creek curved beautiful cascades and little waterfalls in the stone and was trickling lazily down, collecting itself in little waterholes before continuing on with gravity. 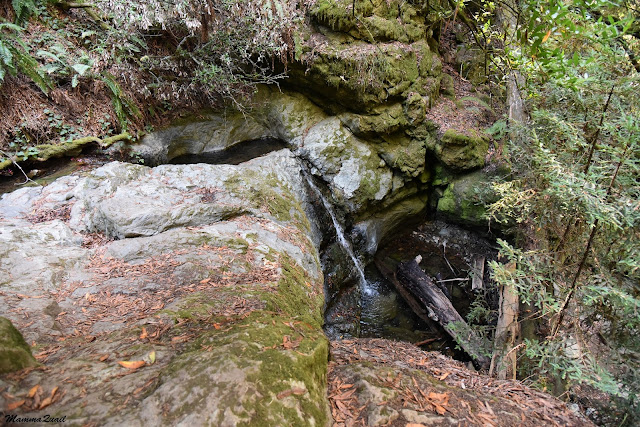 The pecking of woodpeckers was a common sound around as I was making my way up the trail. I didn't get to see more than a fleeting glimpse of the bird as it flew from one tree to another. Pappa Quail has more patience than me apparently, and on our later hike he caught one of them on camera.
I was pushing hard uphill and by the time I arrived at the Pantoll Station I was drenched with sweat. I didn't hang there very long a sip of water, a look around, and off I was again, crossing the Pantoll Road to the Matt Davies Trail on my way downhill back to Stinson Beach.
Going down the Matt Davies Trail is a favorite hike of mine. I've hiked it many times in the past and even posted about it in this blog. Each hike, however, is a different experience. Different time of year, different sights and smells. Different wildlife encounters.
And different excitements :-)
At first the trail grouse through the forest. Conifers, mainly, with laurel trees lining the creek gulches. About a mile down I exited the forest into open grassland lined with cypress trees. The trail leveled and my chest expanded with joy. 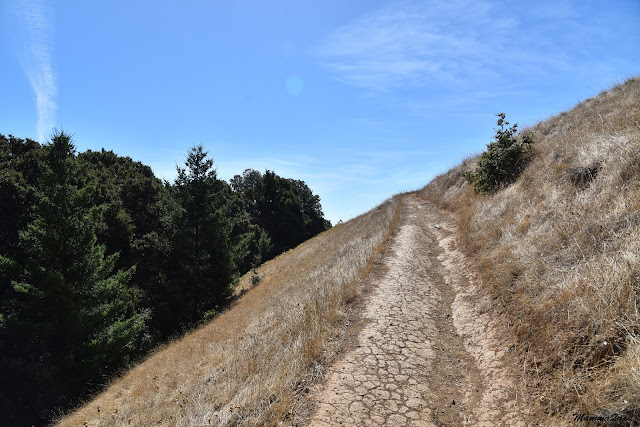 The dark cypress trees are a perfect cover for birds. But then again, those who search for birds eventually finds them :-)
I love the sense of openness and expanse when I'm out in the open high up a mountain. The air certainly smells sweeter. 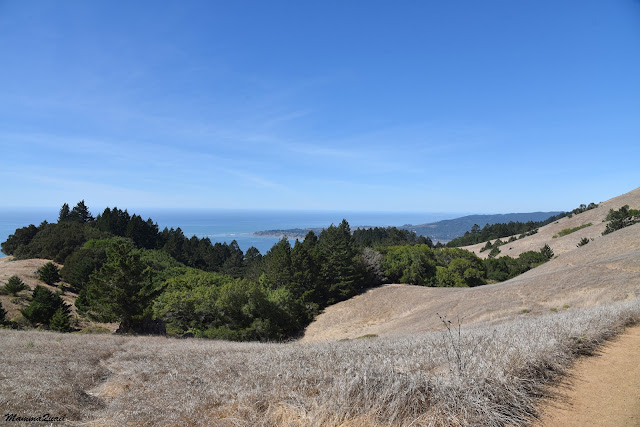 I was amazed to see that it was the western slop of the mountain that was so lightly forested. I wonder if the soil there doesn't hold water as well. 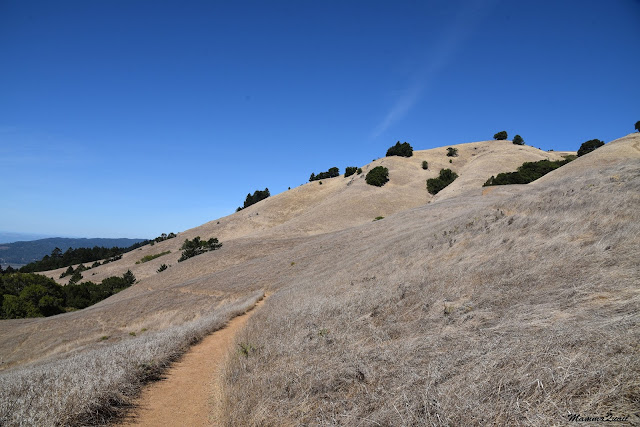 On the day of my solo hike Mount Tam was bathing in bright sunlight but San Francisco was deep in fog. On my second hike however, light clouds spread across the sky all around and San Francisco was visible on the south.
Back on my sunny solo hike I was actually grateful to get back in the shade whenever the trail came under some trees. 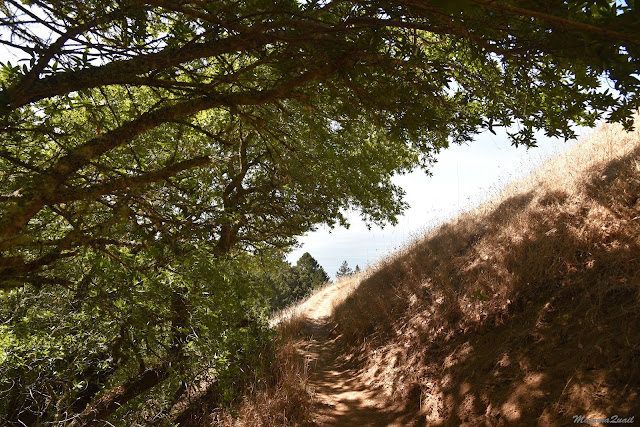 Eventually the trail became considerably steeper and I was skipping down narrow flights of stairs trying not to lose my balance in my rapid descent. The surroundings changed too - I was back inside the forest, this time with oaks and laurels. The forest floor was carpeted with fern. 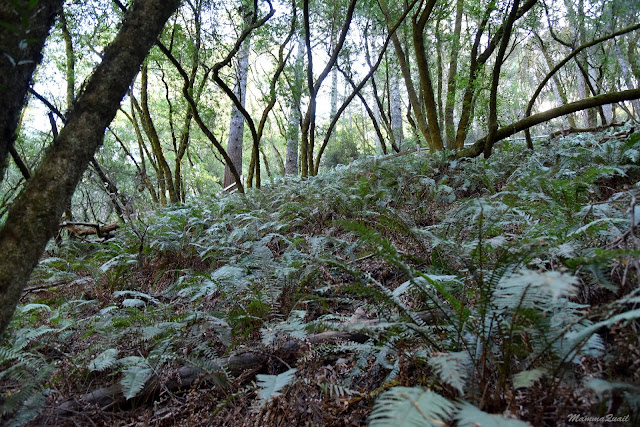 When I reemerged from the forest I was almost at the foot of the mountain. At that point I was worried about getting back home in time to pick up my chikas from school so I didn't stop anymore to take photo. Not many, anyway. 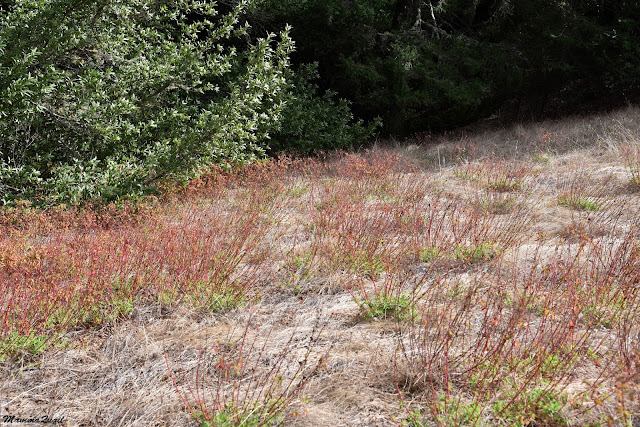 Just before coming into town again I had to stop and look at the trees again because that entire bit of forest was completely covered with English ivy. That menace of a vine, brought hither from the old country to cover houses and make them look like Europe and quickly found its way to the wild and is busy changing the California landscape, and rapidly. And the sad thing is that this plant is still propagated on purpose and commonly planted in gardens and yards. Once established, there's no getting rid of it. I know, I am losing the battle with those in my own yard.
I made it back into Stinson Beach right behind the fire station and zoomed through town to get to my car at the beach's parking lot. As much as I wanted to stay by the ocean, it would have had to wait until my group hike there two weeks later.Because there's nothing better after a good hike than to sit at the beach and relax by the sound of the waves (and to wave the arms wildly at the gulls that try to raid my backpack).