Alone in the Wilderness Once More: From Courtright Reservoir to Orchid Meadow

That time of year when I get to go an a backpacking trip was approaching fast and I had no destination set yet. As the date approached fires were ignited almost everywhere that I had in mind to go to. Eventually I settled on Dinkey Lakes Wilderness - a relatively small wilderness area northwest of Kings Canyon National Park. Last year on my solo trip to the Golden Trout Wilderness I had realized that being alone on such a trip isn't my cup of tea and I was happy to have a good friend fly over from Boston to join me on this trek.
Fate, however, had it different and on the day we were supposed to leave for the trip my friend was called urgently back home. Once again I was going on my own.
It was already 3 in the afternoon when I arrived at the Sierra National Forest rangers office in Prather. There I found out that all permits for the Willow Meadow trailhead, the main trailhead leading to the Dinkey Lakes loop, were already booked for the day. I thought I'd get a permit for the morrow but when the ranger on duty learned that I was planning to include a hike to the Courtright Reservoir in my trip he suggested I'd get a permit for the Cliff Lake trailhead and execute my plan the other way around - starting at the Courtright Reservoir. It was a good suggestion. I pulled the permit and headed up to the mountains.
From Prather to the trailhead is about 1.5 hours drive, and it was well after 5 pm when I finally hit the trail.
I started hiking in the woods. The forest was of mainly conifers and stayed so throughout my entire trip. i didn't feel the elevation much, perhaps because of the time I had spent in Lassen Volcanic National Park the week before.
I was hoping t see wildflowers along the trail and soon I started seeing them. Not in large patches or carpets, but dotting the undergrowth with nice, bright colors.
The trail started sloping down and soon I was walking on a steep grade downhill. By the end of the trip I would have completely forgotten that part. At the time, though, I was trying to cover as much distance as I could in the short day time left and I welcome the fast descent.
At the bottom of the big drop I walked through a small area of riparian wetland (that is, mud) covered in wetland vegetation. It was all very pretty but I had to pause from appreciating it in order to lather myself with mosquito repellent.
Two boardwalks crossed the wetland are. The white, cloud-like flowers by the trail side are small inflorescences of  the Apiaceae family of a species I was unable to identify. Their beauty came mostly in high numbers, creating pretty carpets. 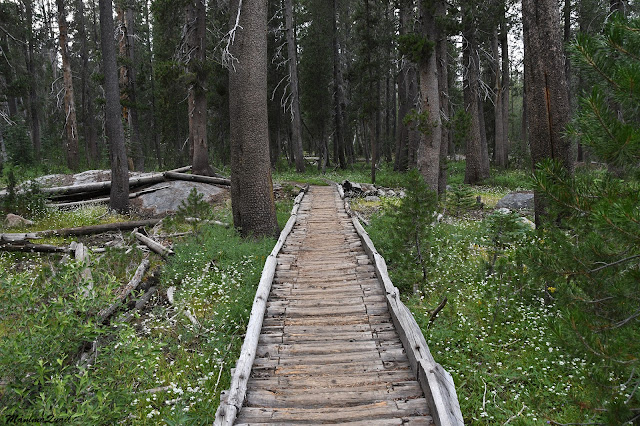 I went on through the woods at a fast pace, stopping only briefly for quick snapshots of wildflowers.
The trees opened up at as I turned around the corner where Nelson Creek spills into the Courtright Reservoir. The reservoir was low and has been for some time, if to judge by the vegetation that grew in the exposed area. I took a few moments and stepped off the trail to look at the reservoir more closely. I munched on the apple I took with me - the last fresh fruit I'd have on the trip, and gazed at the calm water and the overcast sky. The exposed granite peaks were beautiful but gloomy. Suddenly I felt very lonely. I hoisted my backpack and moved on, putting that feeling away.
Soon i came upon Nelson Creek. There wasn't much water there, just a few water holes between the rocks, calm enough to show a nice reflection.
Across the creek the trail continued fairly level. I run into a group of day hikers that were returning from Cliff Lake. They nodded to me as the passed by, one by one. They were the last people I saw that day.
I renewed my quick pace. The sky was already darkening. Not sunset quite yet, but the clouds were moving in. Not rain clouds, but enough to dim the light. Many of my photos from that time turned blurry, but some did come out nice.
I followed the trail through forest and meadows. Every now and then I got close enough to the creek to see that it was dry. That worried me because I already knew that I won't make it all the way to Cliff Lake by nightfall and I was planning to camp by the creek. Now I had to rethink that plan, because I wanted access to water. 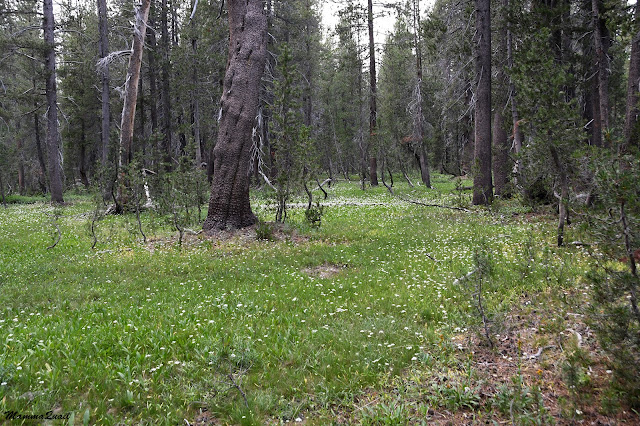 I came upon another wet area. A smaller one, so no boardwalk this time, but signs were (deep, dried foot prints) that it was muddy not long ago. On the side of the trail grew a few bog-loving wildflowers and one of them caused my heart to skip a beat. There, near the trail, orchids were blooming, and they didn't look like the common bog orchids that I was used to seeing at mountain wetland areas. I dropped my backpack and knelt down. Illumination was bad but I took many photos and some turned out ok. That was an orchid species that I have never seen blooming before and I was very excited.

Then I noticed the sun on the horizon, peeking through the boughs. The sun was setting. Soon It will be dark. I quickened my pace. 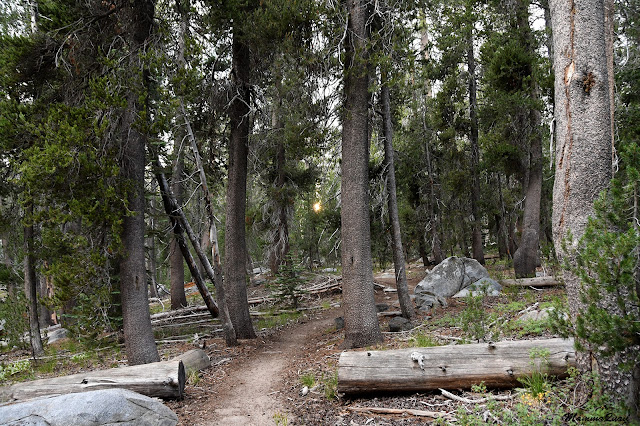 All of a sudden the trail got steeper. My pace slowed down accordingly. I paused momentarily to look at a pretty mushroom and more importantly - to consult my map. Nelson Creek along which i was walking was nearly dry, and the few water holes I saw were small and murky. Up ahead, however, was a trail branching off to Helm's Meadow. According to the map there was a small lake near the trail, approximately 1/4 of a mile in. I decided to go there, hoping that the lake would not be dry. 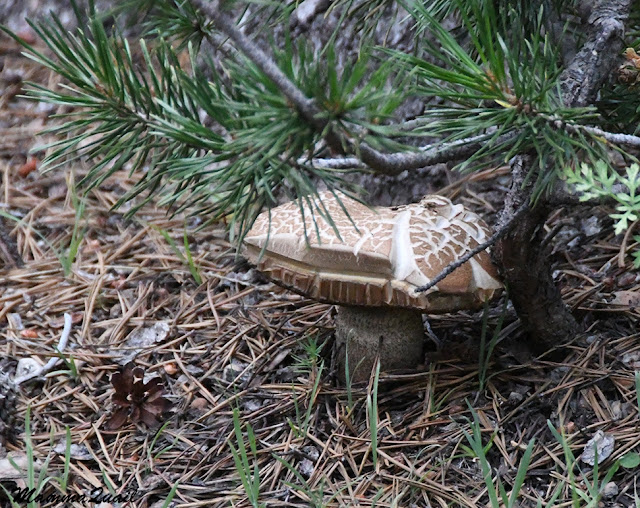 I came upon the intersection and turned northeast. The trees were smaller and the ground was damp. Clouds of mosquitoes buzzed around me and despite the deet I had on I was being bit. 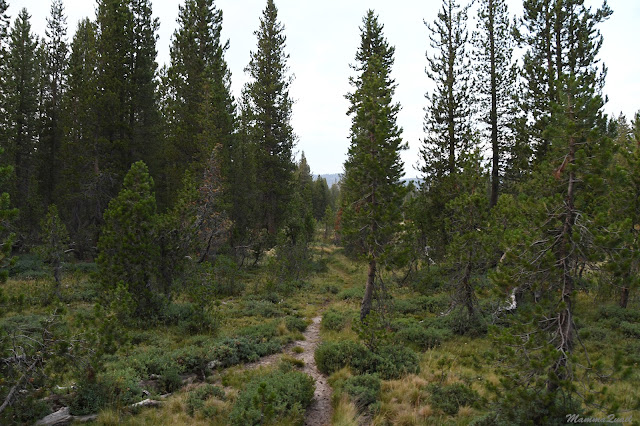 At least the wildflowers were a good distraction from the incessant buzzing.
The sun was already below the horizon when I made it to the little lake. I was happy to see that it was still holding plenty of water. I was less happy to find out that it was surrounded by a wide belt of soft, deep mud.
I found a place to pitch my tent where it would be least disruptive to the pretty vegetation that surrounded the lake. Then I walked around until I found a place with enough rocks that I could hop on to get to the water without sinking in the mud and I filled my containers. 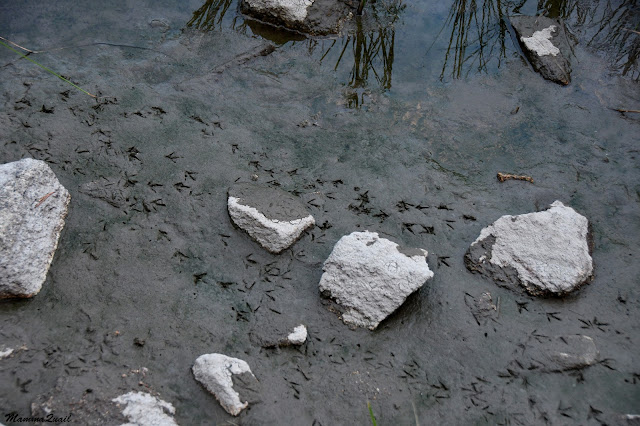 I pitched my tent. Not feeling like cooking anything I ate a cold dinner, filtered the water I collected and took some more time to look around in the fading light. Now that I was all set for the night I finally noticed that the field between my tent and the belt of rashes that surrounded the lake was full of little, white wildflowers and that many of them were orchids - the same Spiranthes porrifolia that I had seen earlier near the trail. A whole field of them! Of course there was no more daylight good enough to photograph them. that would have to wait for the morrow. The meadow, like the lake had no name on the map. I named it for my self and for this post the Orchid Meadow.
There was enough light still to photograph the nice reflection in the lake. 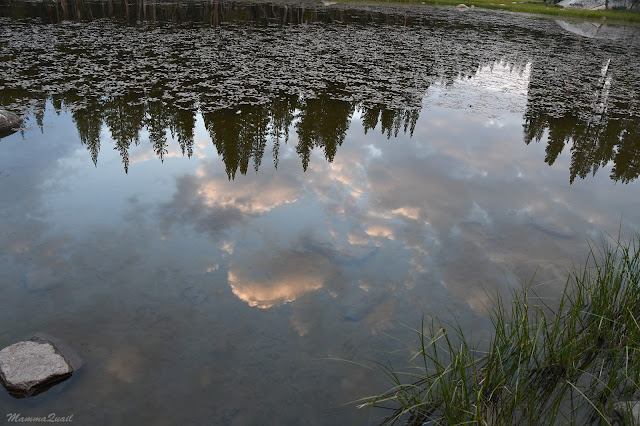 The trees were completely dark. The clouds that covered the sky earlier were breaking up and the few that stuck around glowed in the last light of the day. 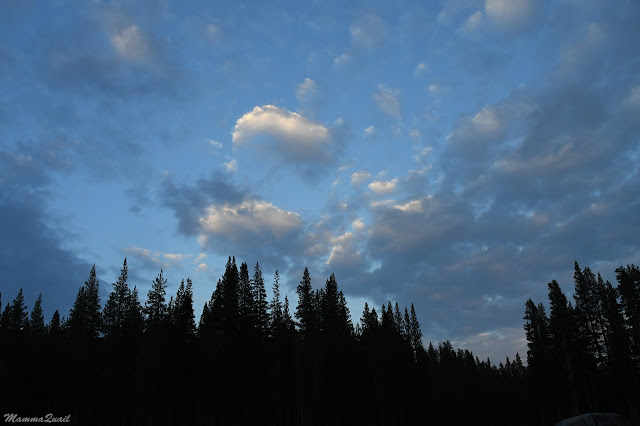 Everything around me darkened. I organized my stuff, brushed my teeth, and crawled inside my tent. I swatted the few mosquitoes that made it in with me, but couldn't do much about the hoards of the outside ones that continued to buzz around the tent all night long. Little frogs jumped on the rain fly, their little shadowy figures dark against the faint luminescence of the cloth. A few times I thought I heard a large animal making its way through the forest. I tossed and turned, sleepless throughout most of the night.