Up to the Land of Lakes


When I was convinced that the night was over I crawled out of my tent. The air was cool and damp and fairly dark still, but I've had enough of sleepless tossing and as tired as I was, I was ready to get going.
It was the morning of my second day at the Dinkey Lakes Wilderness. I was on my own, having had a very late start the day before and having to camp for the night in the middle of nowhere.
Ot was a very beautiful middle of nowhere. As daylight grew brighter I slowed down my packing and took the time to appreciate my environment.
That I was camping close to a gorgeous field of wildflowers I already noticed last night. Now, however, I had the chance to inspect them more closely.
I recognized the pretty elephantshead which I have seen on other trips to the Sierra Nevada. With its pale and delicate bloom this plant blended well in the moist, gray-green meadow background.
But the plant that dominated the wildflower scene there, the species I first met yesterday, was the Ladies' Tresses orchid - the Spiranthes porrifolia. There were s many of these little, candle-like orchids sticking out of the grass that a it was impossible to come near for a good closeup without stepping on them. I remained in the back and used my zoom instead.
By the time I finished packing my stuff the mosquitos were all over me. I hoisted my backpack, took a last glance at the pond I slept next to, and started back to the Nelson Creek Trail.
One of my take-home lessons from my last year's trip to the Golden Trout Wilderness was that I need to eat right in order to not get sick. Still, I could not bring myself to cook breakfast and I didn't want to sit and eat at the mosquitos-ridden Orchid Meadow, as pretty as it was. Cliff Lake didn't seem too far away on the map and I made up my mind to have a proper meal when I get there.
The day started gray and overcast. The sun had already risen, but illumination was very low still. The brightest spot in the area was a field of white inflorescences of hemlock or parsnip. 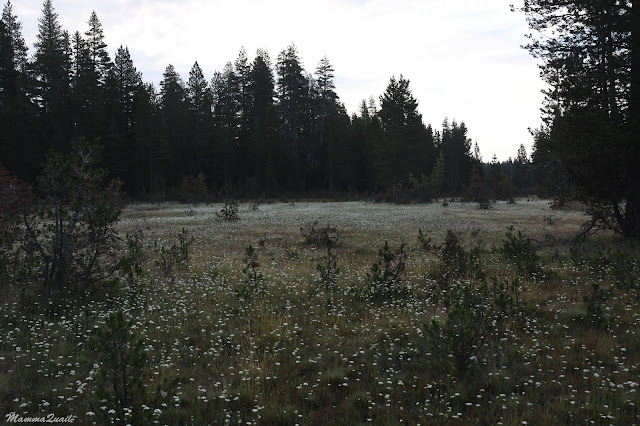 By the time I reconnected with the Nelson Creek Trail the clouds had dispelled and the sun broke out. I felt tired and dizzy so I stopped for a break. A packet of vitamin C (that had lots of fructose) and lots of water help a lot, and too I was up on my feet again, and moving steadily uphill.
The slope continued as I left it the evening before - clear and steady uphill, but not very steep. A glimpse of color caught my eye - a bright orange quill feather. I recognized the owner right away - a northern flicker, which is common in these areas.
There were also some wildflowers along the path, although not as dense or as unique as I've seen near Hidden Lake.
Colorful pussypaws matted the forest floor, a welcomed sight in an otherwise mostly bare ground.
And then I caught a quick movement and turned in time to see a woodpecker land on a nearby tree. I photographed her just in time before she moved completely behind the tree trunk.
The trail neared Nelson Creek again and I heard loud barking from the creekside. There I noticed a tent and a young couple that I remembered seeing at the Prather rangers office the day before. They must have embarked on their trip before me, or otherwise passed me while I went on my Hidden Lake excursion. Either way, they too didn't make it to cliff Lake last night and had camped by the creek. The woman waved me while the man tried to hush the dog.
I moved on but stopped soon thereafter to take a photo of the lovely creekside vegetation.
After that encounter the trail became considerably steeper. I also got much hungrier but I didn't want to stop there. I wanted to get to the lake where I could get water and cook I chugged along. 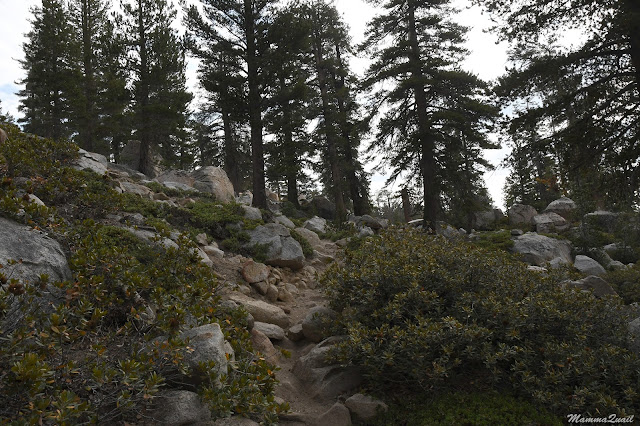 The clouds returned too, and the forest became dark once again. Not many wildflowers there, only a pussypaws here and there, or dried up jewelweed. But color can come also from non-biological sources, like a granite rock with a nice pattern of oxidized metal compounds. 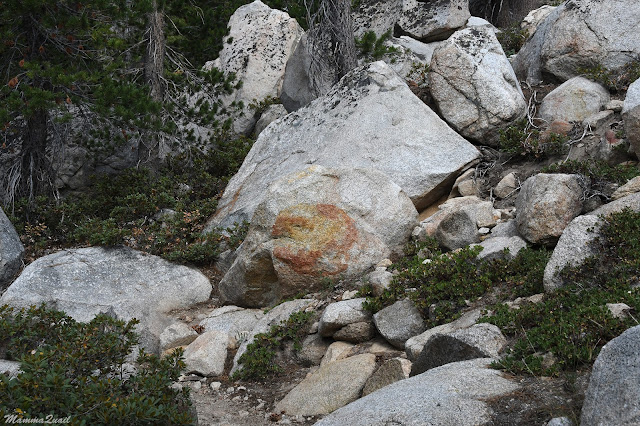 A group of people came down the trail. they were backpackers who spent the night at Cliff Lake and were heading out now. They assured me that the lake was very close now, and that it was really beautiful and worth the sweat. Not that I was any close to disparity but I appreciated the reassurance and my spirit was lifted by their smiles and happy chat. I also was high enough now to see the view over the treetops, and it was magnificent. 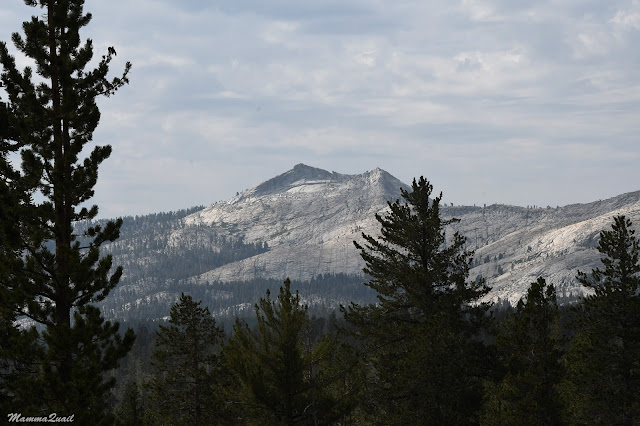 The treetops themselves were a sight worth seeing.
The trail leveled and soon I reached the trail fork leading to Cliff Lake. I juvenile robin greeted me with a bold gaze as I quickened my pace towards the lake. It let me approach quite close before fleeing into the bushes.
The lake was to my right but the trail kept leading my north. I saw little makeshift trails leaving the main one and dropping down to the lakeshore. Seeing that the main trail was beginning to go uphill again I left it and went down one of the side trails too.
There by the lake shore I saw many a campsite, some abandoned and some that were occupied still. I stole around the hammocks and tents that were splayed along the southeastern shore and found a private cove with a nice sandy beach all to myself. There I dropped my backpack and pulled out the bear canister and my stove. It was the best breakfast ever :-)
After filling my stomach I got up and looked around. There were wildflowers along the shore and they looked familiar to me - they were gentian flowers like those I saw on my backpacking trip to Mineral King two years before. Beautiful little plants that made me very, very happy.
There were plants growing inside the water too. Rushes, mainly but also a strange-looking plant with long eaves that were floating on the water surface. I remembered these leaves too from Spring Lake where I stayed with my friend on our Mineral King trip. 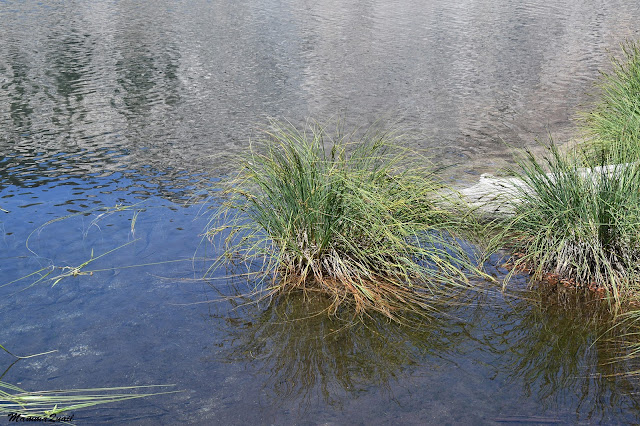 I managed to approach the floating-leaves plants. They had ball-shaped inflorescences and fruit that looked very pretty. Later I was able to identify the genus but the species ID I got with the help of members of the California Native Plants Society.
There were other wildflowers there too - many mimulus flowers and pale purple asters, but the species that stood out most in its brilliant colors was the owl's clover, a relative of the Indian paintbrush.
After a good long break I was ready to go on. It was not even noon yet and I had no intentions to stay at Cliff Lake for the rest of that day, beautiful and inviting as it was. I wanted to get to the Dinkey Lakes area by the evening.
There was a mountain pass to go past but the distance and elevation weren't that much and I thought of checking out a small lake I saw on the map nearby - the Bullfrog Lake, before going down to Rock Lake where I had planned to spend my second night.
The exploration of Bullfrog Lake and my hike over the pass and down to the Dinkey Lakes area I will write about in the next post.