After our visit of the Shasta Lake Caverns it was then time to go home, but it was still early in the afternoon. Once again Pappa Quail was the motivator. He suggested we'd stop at the Sacramento River Bend Nature Area and hike there a little before continuing to the Bay Area. We expected a lot of bloom there, as we've seen on our last visit of that place.
I jumped on Pappa Quail's suggestion, but selected a different trail from the one we've hiked previously.
We arrived at the trailhead and looked around. The parking area was surrounded by large valley oak trees. Acorn woodpeckers were busy and noisy in these trees.
But woodpeckers weren't the only birds on the oak trees. With some patience, Pappa Quail managed to photograph a little bushtit.
The trail I selected is named after the tribe that used to live in that area before the gold rush. The Yana tribe of Native Californians was persecuted and massacred to extinction in the early 1900 by gangs employed by the new settlers and prospectors with the silent approval of the authorities. Today all that remains of the Yana are names to remember their past existence and the chronicles of Ishi, the last of the Yahi (the northern group of the Yana), who lived the last four years of his life in San Francisco, studied by anthropologists. 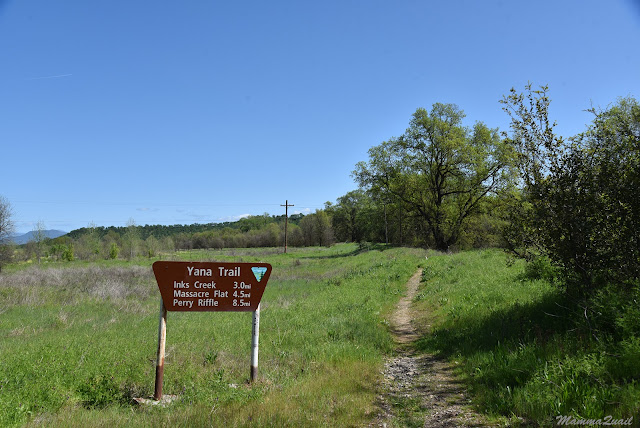 The Yana Trail follows the Sacramento River for a good distance. We didn't have the time to walk the entire length - all we wanted is to get an impression of the area. 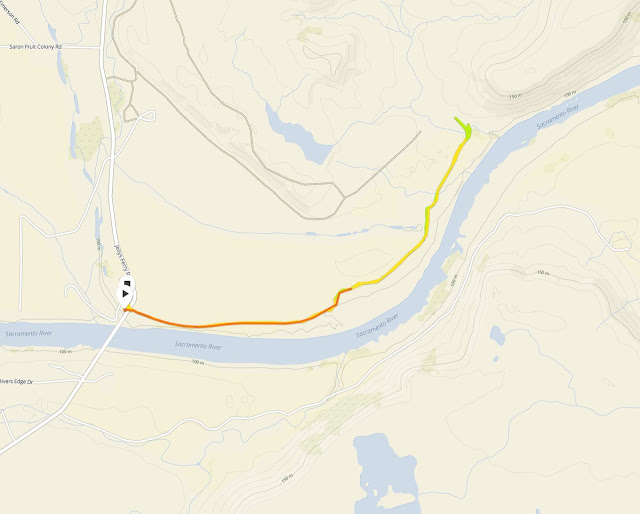 In the field ahead I saw the sought after fields of wildflowers. I was disappointed to find that all of these flowers were invasive weeds - cabbage, mainly.
I was way more impressed by the looming snow-capped Lassen Peak and Brokeoff Mountain in the background. 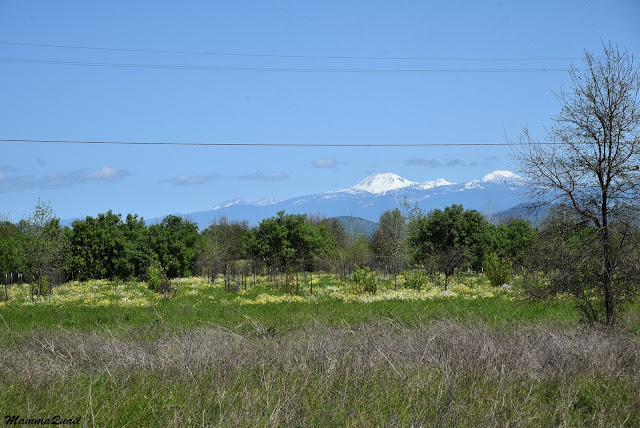 Although I wasn't impressed by the cabbage bloom, I was happy to see those who were. The butterflies loved them.
The butterflies also loved another aggressive old world invader - the Hairy Vicia.
The trail follows the Sacramento River. We could see the flowing water to our right, guarded by the newly-budded trees. Among the trees I detected a familiar bloom - that of the tamarisk. The tamarisk is a very aggressive invasive species in California. It is more of a desert plant, but apparently it flourishes in wetter regions too. 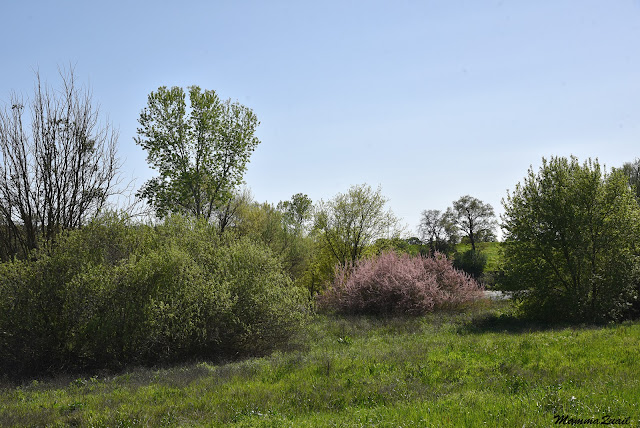 At times the trail neared the river and we could get a better appreciation of the wide, fast moving flow.
There are fish in the Sacramento River. And where ever there are fish - there will be those who fish them. Pappa Quail photographed an Osprey that was passing above.
Other raptors scouted the ground from above, looking for pray that isn't fish.
Or looking for dead carcasses.
There were more butterflies too, and they were very active. Catching one at a moment of rest was a challenge. Pappa Quail managed this better than me.
I settled for photographing a small brown butterfly. Not as fancy as the swallowtails and other butterflies, but it was standing still. 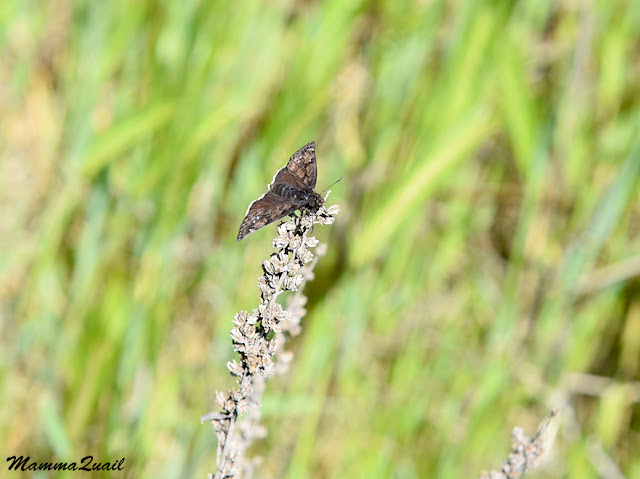 The trail detached from the river and we were walking through an sparse grove of large oak trees. These were deciduous that had budded very recently and wore very bright, light green foliage. Between the trees large brown rocks lay exposed. 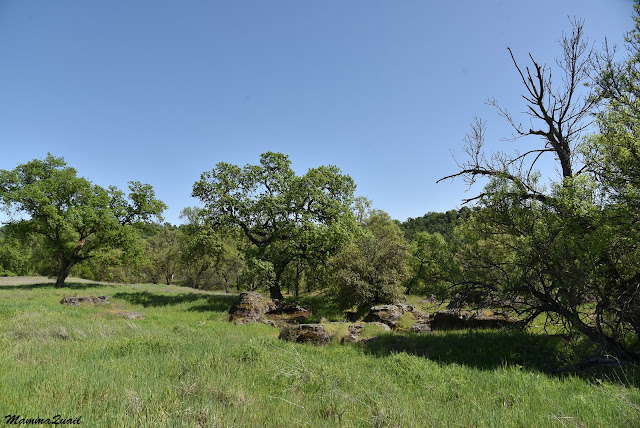 I saw little ponds locked between the rocks and approached to take a closer look. I thought I detected a move near the water but my eyes were too slow to catch what it was. 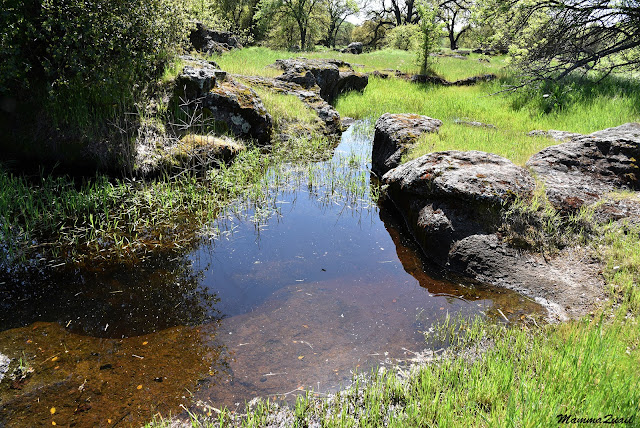 So I sent my elder chika to the pond. In no time she found the local resident - a California Red-legged frog.
The trail continued away from the river and as we were walking east Pappa Quail wondered how far we should go. The map we had didn't show the physical features, only illustration of the trails. There seemed to be a creek up ahead and we decided to reach it and turn back there. 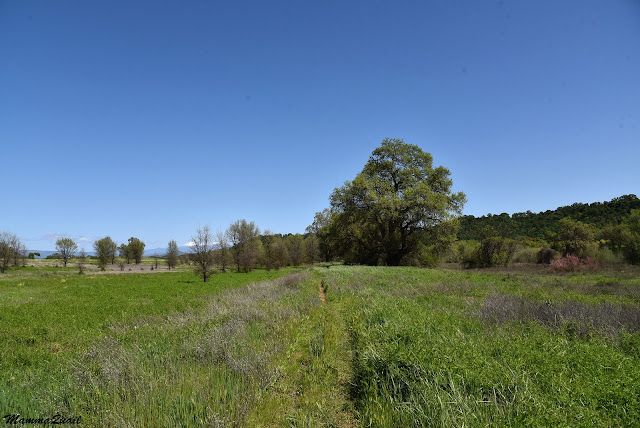 Paying more attention to the plants underfoot I noticed a few native species in bloom - the bright orange fiddleneck standing out between the cabbage and the vicia. 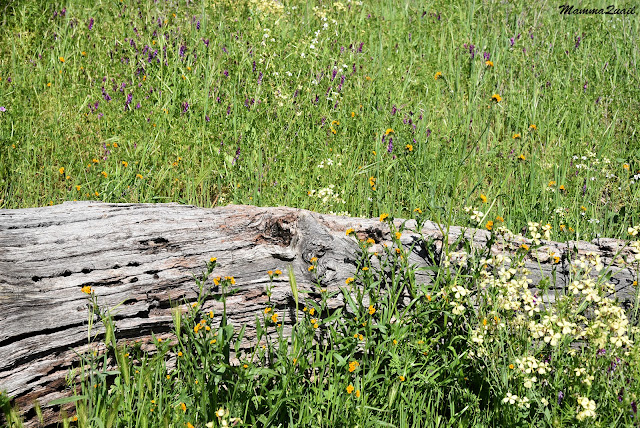 The fiddleneck attracted yellow butterflies. These were hyperactive - neither me nor Pappa Quail got a good close up of these. But the elder chika has a way with wildlife and she succeeded.
We reached the creek where we thought of turning around, and sat down to rest and snack. i crossed the creek to look at the other side a little. When I came back I saw that the chikas had found more frogs in the creek.
The elder chika saw the opportunity of my absence and caught one and held it for Pappa Quail to photograph. She release it promptly after that, and the frog hopped into the weeds.

As we headed back Pappa Quail turned around and took one of the his few landscape photos - of the magnificent Lassen Peak. In three months I'd be there again, and climb Mount Brokeoff. By then, only tiny patches would have remained of its white cap.
I was somewhat disappointed when we finished the hike. While it was a very nice hike, nearly all the wildflowers along it were invasive weeds and I was hoping to see more native California species. Pappa Quail looked at his watch and suggested that we go to the trail that we hiked four years earlier and see if the bloom is ferret there. I agreed eagerly.
We crossed the Sacramento river again on our way there and this time we stopped to appreciated the spring-swollen river.
When we arrived at the place of our hike years ago the chikas announced that they are to stay in the car and would not go on another hike. Pappa Quail said that we didn't have much time at all if we're to get home at a reasonable hour, and so I took of on my own, just to get a quick look around. 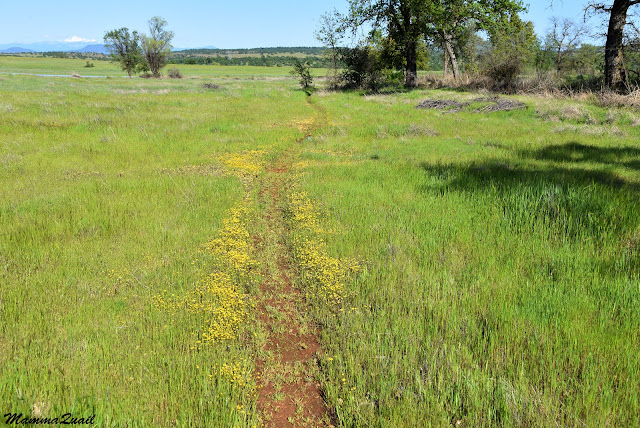 I was rewarded immediately. While many of the herbaceous plants around were invasive, there were many California natives too. The California goldfield was most prevalent, and the yellow patches were dotted with little low brodiaea .
There were a few other little beauties hiding in the grass, but the one flower I wanted to see, the Downingia I've seen on my first hike there, was nowhere to be seen. (I would see it on my next visit there in May with my Botanist friend.) I also found quickly enough that I couldn't go very far because the trail was flooded. the area near the trail was flooded too, and the mud deep and heavy.
I managed to walk far enough to see the pond, which was rimmed with the gorgeous yellow California goldfield. 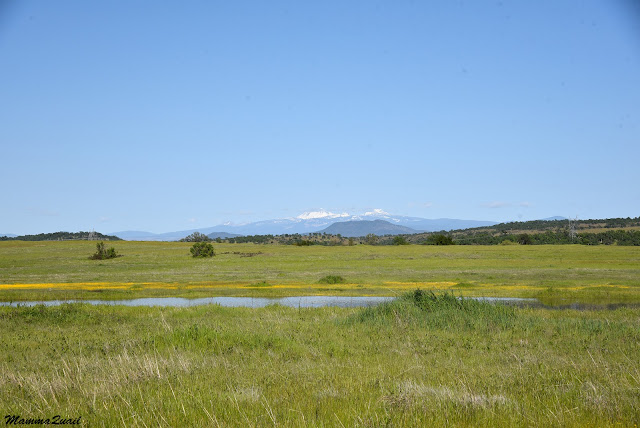 I did not dare, however, to get any closer to the water. I feared of sinking into the mud. So I looked around, appreciated the view deeply, then turned and walked back. 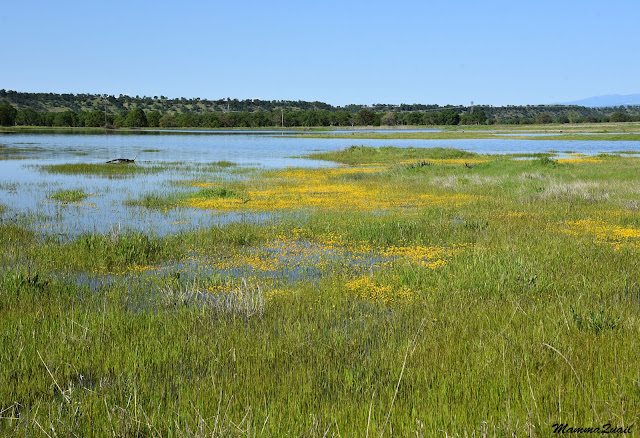 On my way back I took a few steps over to look at the water canal near the trail. There was no special bloom there, it just looked nice. 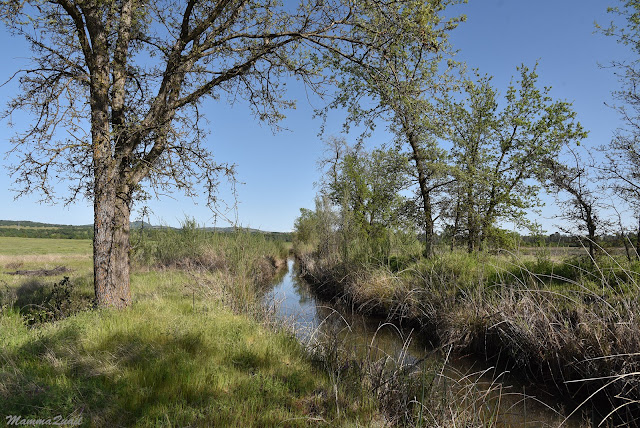 Back at the parking lot I saw that my elder chika didn't keep her resolve to remain in the car. She was busy looking at bluebirds and got some nice photos of these lovely birds.
It was getting late. Satisfied, I got into the car and we started our long drive back home.
This was the last hike of the last day of our last spring break, in which we were on a very interesting and diverse trip. I am already planning the next one in my mind.


Many thanks to my friend Anenet who identified the wildflowers :-)