In recent years I've joined a number of online groups with interests in different aspects of California. One of these groups focuses on the Eastern Sierra region and there I have learned about many places that I probably would have taken much more time to learn about, if at all. One of the places that keeps popping up in this group at a fairly regular basis is Convict Lake, and the posted pictures of it show a lovely alpine lake nestled in a cradle of rugged peaks. As I planned last May's road trip with my friend I added Convict lake to the itinerary.
When we arrived at the picnic area of Convict Lake after our visit of Mono Lake it was already high time for lunch so we carried our food and dishes down a little path to a secluded picnic table hidden in a grove of cottonwood.
We might have been hidden from other people but it was clear that the local squirrels were accustomed to people's food there. Not a minute passed since we settled at the table and a squirrel climbed boldly on the table and tried to snatch away morsels. We didn't let her, of course. Getting habituated on human food is bad for any wildlife. (A lot of it is bad for people too, if I may add). We did get some really nice close up photos of that squirrel though.
The picnic site itself was very lovely. The tables were separated from each other cottonwood trees with new, bright green foliage. The lake was almost hidden as well. We could see patches of blue between the moving cottonwood boughs. And the trees were moving a lot - the wind had picked up and was blowing strong.
After finishing our lunch we packed everything back in the car, wrapped ourselves against the wind and started down the path surrounding the lake, clockwise.
As soon as we cleared the picnic area we were out of the cottonwoods and into a tall shrub area. On one of the first shrubs we came across was a large nest of caterpillars.
The trail ascended slowly above the lake. every now and then we passed a flight of stairs leading down to a small patch of beach where people would sit. Most of these semi-private spots were vacant, it was too cold and windy to enjoy a relaxed afternoon by the water.
Many of the shrubs were blooming, which was a very lovely sight. We saw there the already familiar serviceberry, blooming with delicate white flowers.
Next we noticed the intense pine of the desert peach. The first peaches we saw were far below us. 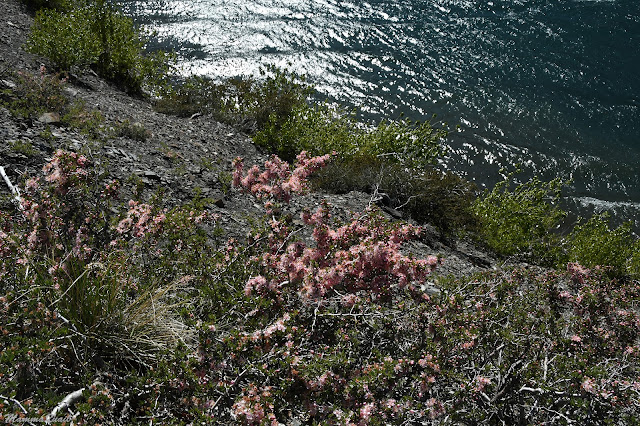 But a few steps further the desert peach was blooming right by the trail.
I looked back to the eastern end of the lake. It looked as if the water was held back at the edge of a cliff. There is no cliff there, however. Still, it's nice to imagine a huge waterfall just out of my sight.
Then we had  surprise - a snow patch! We saw some snow patches way up the mountain but this one was right by the trail. A few steps off the trail and we touched the dirty old snow.
As I write this post Convict Lake is frozen over and covered with snow and all its surrounding is covered in snow as well. The difference is amazing.
The dominant bush growing on the north-facing slope on which we were walking was probably the antelope bush. It too, was in full bloom at the time.
The mountainous landscape surrounding the lake was gorgeous. I didn't take many photos of the scenery because the westering sun blinded the camera . Occasionally I managed to hide the sun behind a tree :-) 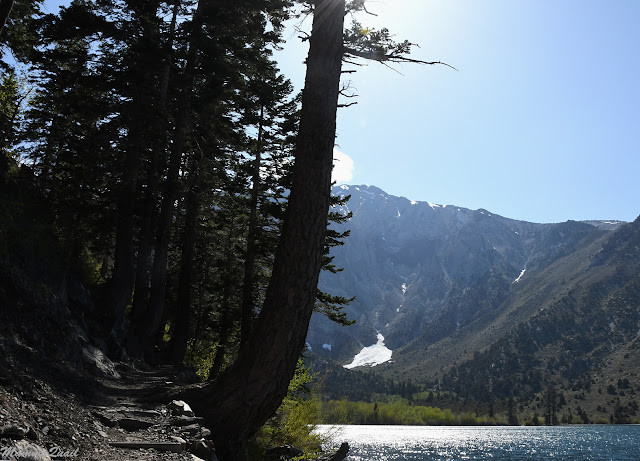 The trees got our attention as well - we stopped to admire a grove of firs growing down a small tributary running to the lake.
We did, however, had a clear view of the lake now. I was mesmerized by the little 'swans' riding the wind-propelled waves. It's apparent by the waves and the leaning if the tree how strong the wind was.
While the shrubs were at the peak of their bloom for other plants spring was just beginning then. 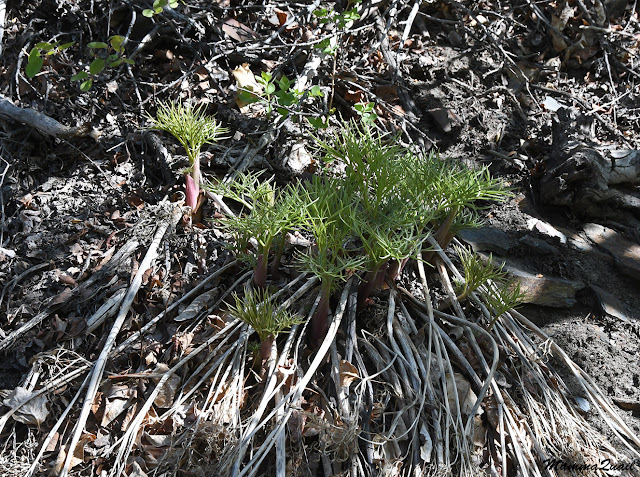 The deciduous trees though, had already grown their new foliage coat. And none was more beautiful than that o the quaking aspen. Our path took us right between two rows of small, bush-height aspens that shook and quivered in the strong wind. I had to turn around and photograph them looking east to avoid the sun blazing directly into the camera. 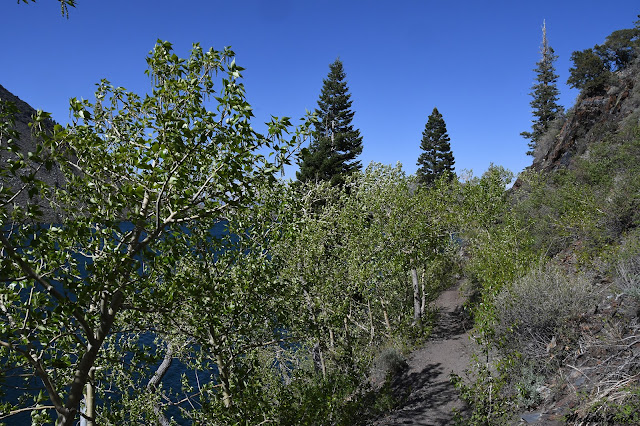 I don't know how, but I managed to capture a focused frame of an aspen branch blowing in the wind.

As we started to go around the curve it became easier to photograph the lake and take in the lovey surrounding mountains and the newly-leafed creek trees of the lake's western shore. 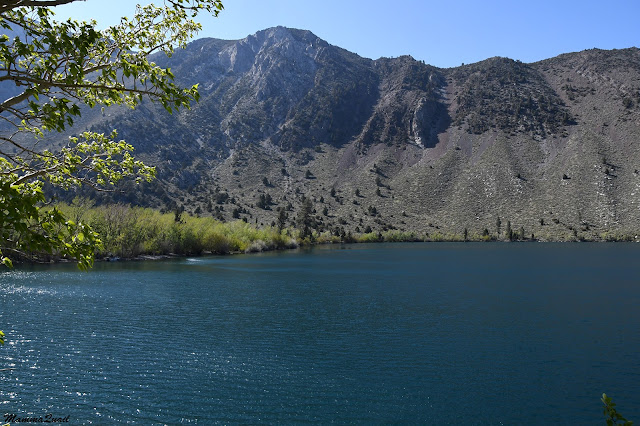 An osprey was gliding over the lake. Suddenly it dropped to the water and came back up holding a fish in its talons. 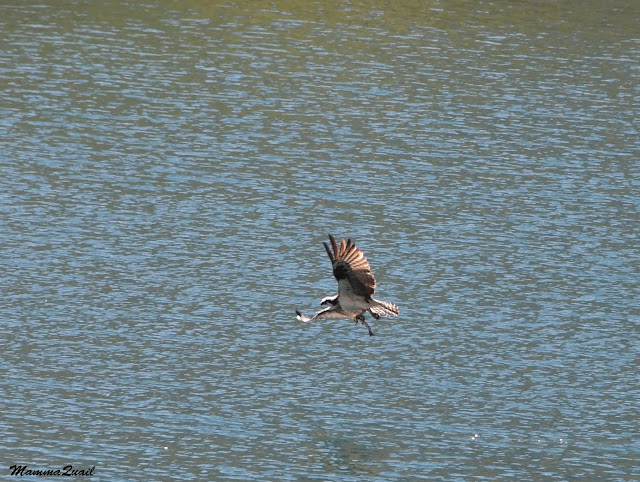 An osprey successfully catching a fish is always a wonderful sight. But we weren't the only one witnessing the successful catch: almost immediately a gull swooped over and started harassing the osprey.

As the osprey gained more altitude a more serious claimer of the catch came by: a bald eagle. The gull vanished from sight - even if it had managed to harass the osprey into giving up the fish it would have no chance against the eagle. Too often the osprey itself doesn't stand that chance - about 40% of the fish eaten by bald eagles are robbed from osprey.
The eagle chased the osprey all the way up and over the ridge so we didn't see who ended up with the fish in the end.
We witnessed the drama with much excitement and were able to capture most of it on camera, but the distance and the poor contrast between the osprey and the hillside bay ground make it hard to see in the photos. Still, it was quite a high moment in our hike!
After that the trail descended again close to the water level. Once again we were walking between aspen tree, now much larger. Some of the trees had markings carved in their delicate bark. This kind of irreverence for nature always sadden me. 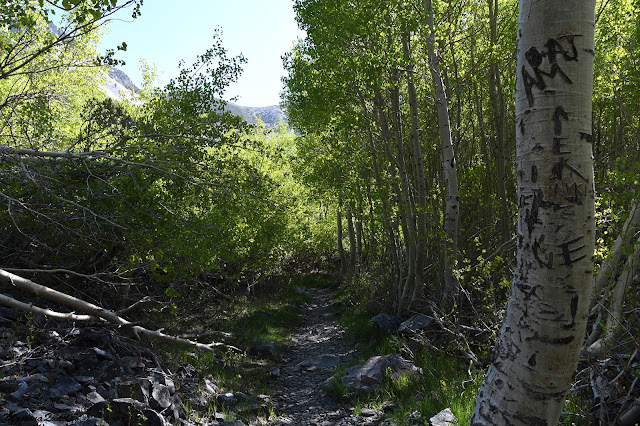 We arrived at the place where Convict Creek spills into the lake and found the trail flooded. We crossed it carefully hopping on strategically placed stones and laid down logs and still got our shoes wet. 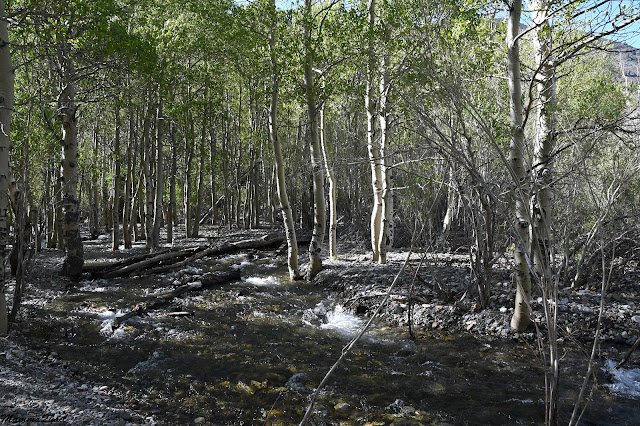 Then there was a boardwalk but it too was partially flooded. It made a nice visual though. 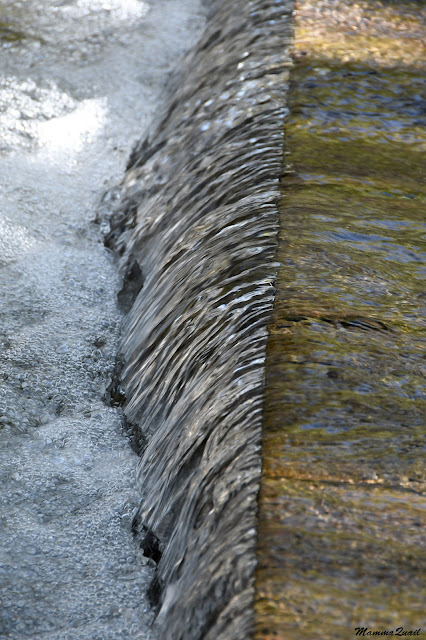 After passing the flooded area we kept for some distance on the boardwalk under a canopy of aspens and alders. Inside the tree tunnel we had some protection from the wind. 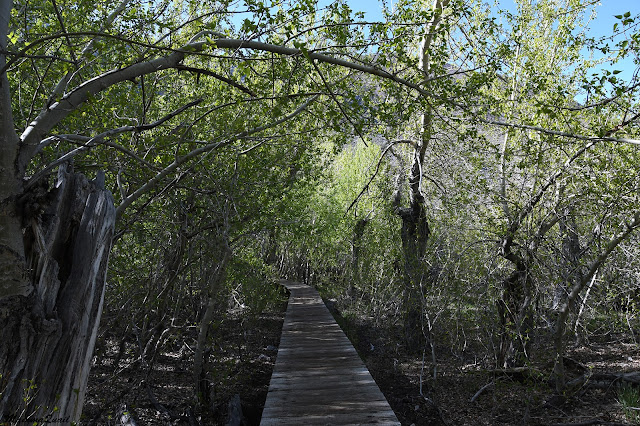 There were a few other people on the trail with us. After stepping off the boardwalk back onto the regular dirt path we strayed a little to a lovely cove to look at the water. 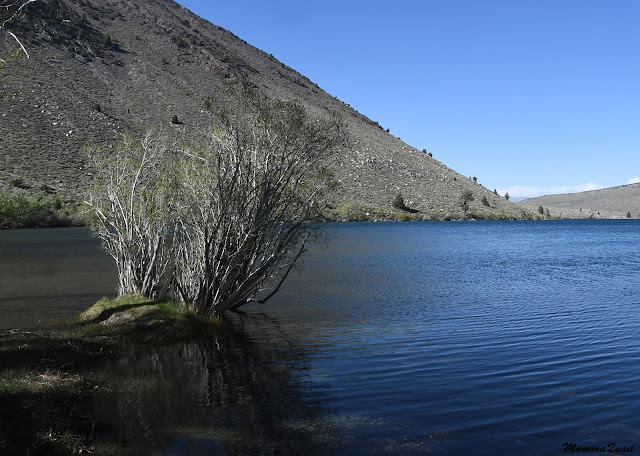 A boat was moored at the cave and a man was fishing from the deck. A bit further down the trail we found a structure built from driftwood. Apparently this place is a favorite recreational spot.
The lake was clear but very ripply so there was no clear reflection
The lake shore was belted with budding alder trees that looked more like bushes. 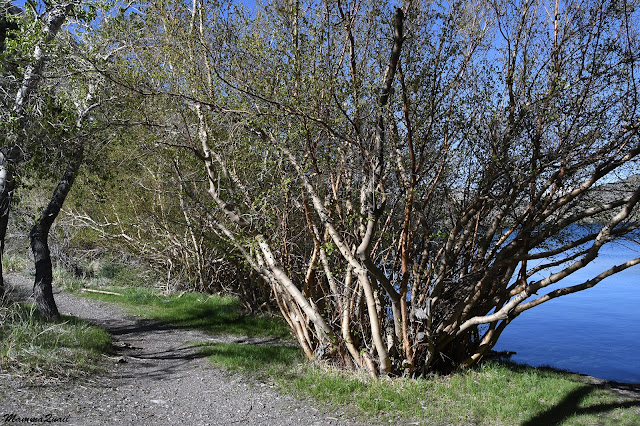 They too, were blooming. Not colorful or scented, yet very delicate and appealing. 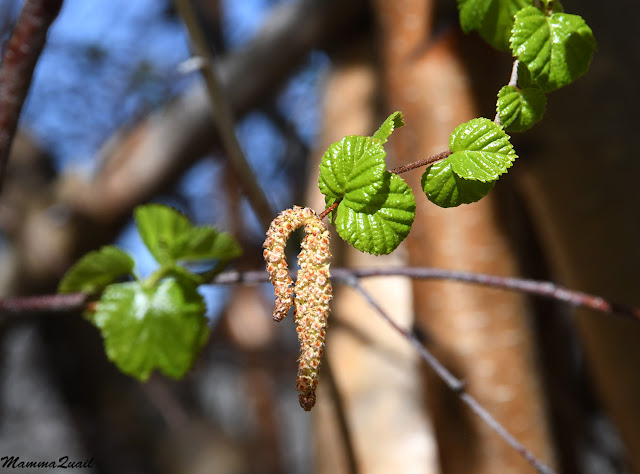 We were going around the curve again, turning back eastward. Finally I had a good view of Mount Baldwin unblinded by sun.
As expected, the south-facing slope on which we were walking was much more arid, supporting much smaller shrubs. There was still the thin belt of small aspens by the lakeshore. 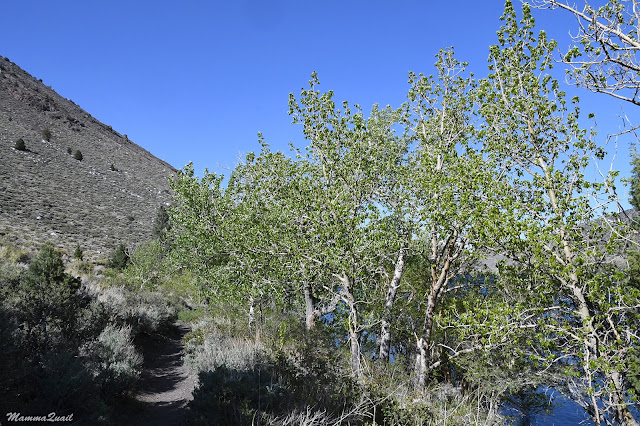 We were walking slow, not in much hurry. There wasn't much else we had planned for that day, except maybe to check out the Wild Willy Hot Springs. The north trail was also somewhat more protected from the wind so we enjoyed the lazy walk in the sunshine, and the great view all around. 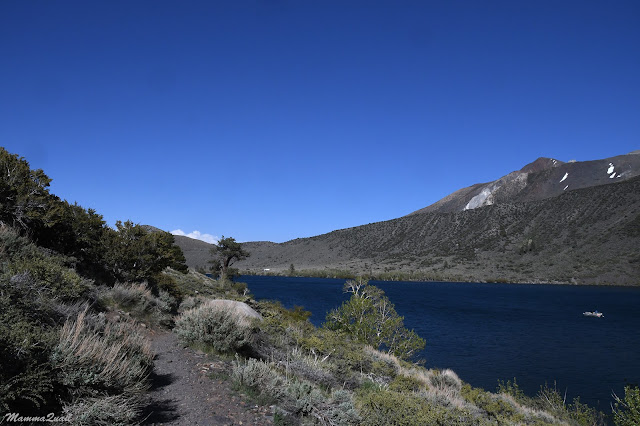 Eventually we were distant enough to capture the view of the entire west end of the lake, nestled in the gorgeous mountain bowl. There is a trail that continues from the western shore of the lake up into the mountains. Perhaps one day I'll get to hike that one too.
The trail ascended a bit higher above the lake. There were somewhat bigger shrubs and small trees down by the waterfront and we heard bird songs and saw little birds flying in between them. One of these birds looked particularly colorful and when it paused a bit I snapped a few shots. I enlarged the images on my camera's view screen and got very excited: it was a grosbeak! Like the one we've seen at the Bizz Johnson Trail the day before.
Then my friend pointed at the sky - the osprey was back. Perhaps it managed to deliver the fish to its nest, or maybe it was a different osprey altogether. Either way, the magnificent bird was circling the lake, looking for fish. Almost instinctively we looked around for the bald eagle, but it was nowhere to be seen. I guess that it did win the fish from the osprey after all, and was taking its time consuming its loot.
We dedicated a few minutes for observing the osprey but it didn't dive so we went on walking and enjoying the view.
Standing alone, every tree we saw on the northern shore of the lake seemed interesting and unique. 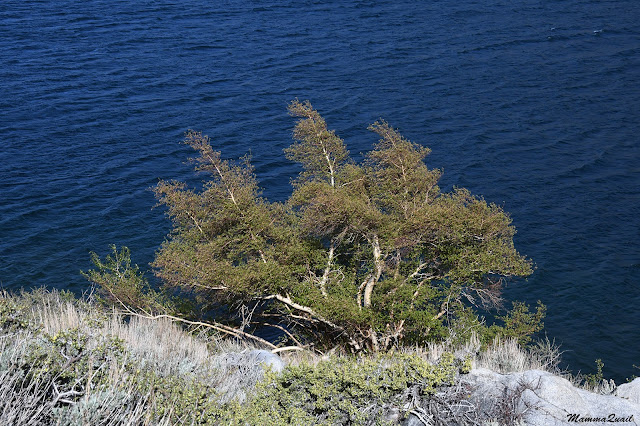 The shadows were getting longer and the wind picked up again. My friend was getting weary so I suggested I'd hurry around the lake and get the car to the eastern trailhead which was closer to us. She agreed and I quickened my pace.
Promptly I reached the eastern trailhead and after that I was walking on asphalt road, then on a paved trail along the road. At the east end of the lake was a deck extending over the water. I went on it to take a look and the wind nearly blew me backward. Shivering, and with my hair whipping all over my face, I backed away from the deck and continued along the lakeshore trail.
The last trail segment between the eastern and southern trailheads was easy, asphalt-paved, and almost empty of people. I didn't see much wildlife there either, save for a few birds. There were, however, some interesting information signs telling the story of the lake's history, and how it was named after runaway prisoners that hid in the area and were later shot in a gun fight.

After so many photos I've seen online of Convict Lake, I finally got to see it with my own eyes. It is as beautiful as I thought it would be. In fact, the photos don't really do it justice. It is a popular recreation area, but still looks very wild. And the walk around is a bonbon of a trail, which I enjoyed much and would love to walk again.

Many thanks to my friend Anenet and to members of the California Native Plants Society for their help in identifying plants!