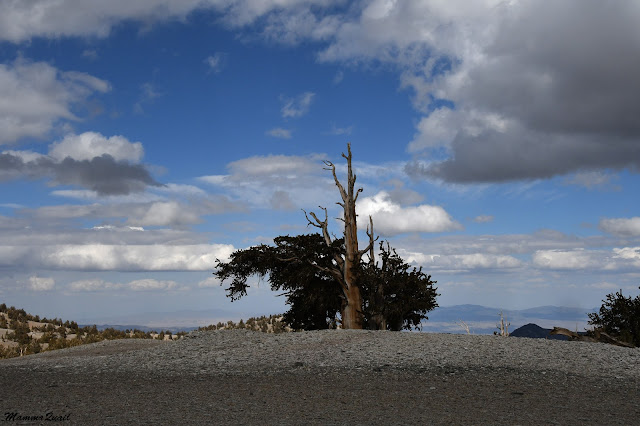 The White Mountains is the western range of the Great Basin desert, the highest peaks of which are home to the oldest trees in the world - the bristlecone pines. They are the only trees that thrive in the want soil and extreme weather that make up their habitat. The bristlecone pine elevation growth line has been on the rise ever since the melting of the glaciers - there are evidence that during the ice age this species grew in lower elevation and their forest covered much wider areas. Nowadays this species grow only at the mountain tops, each grove separated from the others by the lower Great Basin, like islands in a vast desert 'sea'.
After exploring the Schulman Grove I suggested driving to the higher, Patriarch Grove, where I had visited a couple of ties before. While the trees are of the same species, the views are considerably more magnificent there. Besides, there was the Patriarch tree, one of the most impressive bristlecone pines in that forest. We couldn't possibly go away without seeing it!
I didn't really need to try very hard to convince my friend that we ought to go up. We didn't have much time left, however, and the drive is long and slow.
The Patriarch Grove grows at 11,000 ft. When we arrived there, after nearly an hour of slow and careful drive up a sharp gravel road we found that the last mile to the grove's parking area as blocked because of snow on the path. After a short discussion we decided to hike in to the grove.
Almost immediately we came upon the snow. I believe my car would have passed it but I didn't wish to bypass the vehicle block sign.
Large clouds passed swiftly above us and we were walking between patches of shade and sunlight. The wind was blowing hard and we wrapped ourselves well and moved slowly along the road. We were slow because of the elevation and the wind, but also because of the numerous tiny flowers that we found right at the ground level.
Needless to say, we came down on our knees to take a close look at these.
Many of these little flowers we've seen already at the Schulman Grove. Nevertheless, We gave due attention to the higher elevation individuals as well.

Around the trees of the Schulman Grove grew many low shrubs and there was much activity of burds and squirrels. The hills where the trees of the Patriarch Grove grew, however, were almost bare, and we saw very few birds and no squirrels. It could be that it was too early in the season there, or perhaps it was the late hour in the afternoon and the strong wind that chilled us and everything else. I cannot imagine having to live there year-round, but I admit that the thought does entice me.
The road wasn't entirely flat but very easy nonetheless. Not being used to the elevation, however, we took it slow and easy, pausing often to look around and take pictures. There was one more car at the road block so we did expect to meet other people, but we saw no one, nor did we hear anyone. In fact, we didn't hear any birds either. The only sound was that of the wind. 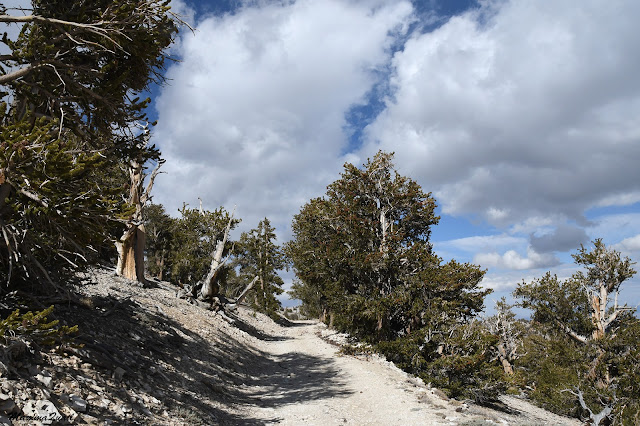 We sat down for a brief breather and to explore a few more of the ground dwellers, those tiny belly flowers that were barely visible from standing position. All of these were completely new to my friend, of course, but also to me. I was glad to have come there at that time of year to see them in bloom.
The Patriarch Grove is much less dense than the Schulman Grove. The trees are further apart and the ground between them almost bare. And it was quiet there. eerily quiet. 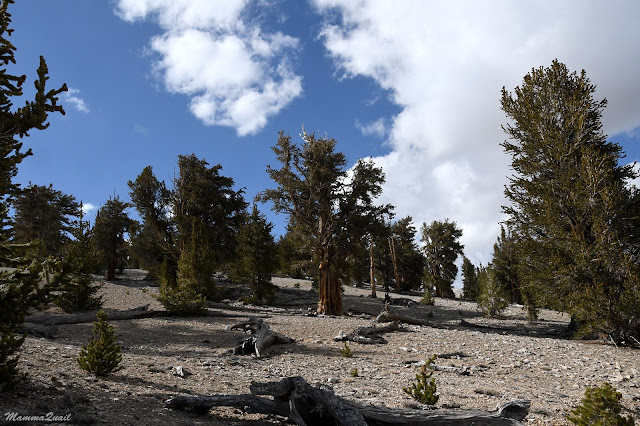 There are two short loop trails in the Patriarch Grove. One of them goes up the hill. There's a nice view from there and the trees it goes by are absolutely stunning in their beauty. I have walked up there a couple of times before but this time we decided to stay down.
Not that the trees below the hill were short of any beauty ...The second loop goes around the other side of the parking area and passes near the Patriarch Tree, after which the entire grove is named.
This tree is about 2000 years old. Not the most ancient in the park, but very impressive in size and age nonetheless.
And why it is called 'The Patriarch' I can not guess. It is still fertile despite of its old age, and produces female cones as well.
As in my previous visit of the Patriarch Tree I photographed it many time, and from every possible angle that didn't require climbing it. I posted such photos on my previous post of this place. This time I settled for a bit of snow that we found hidden in a crevice of the tree. 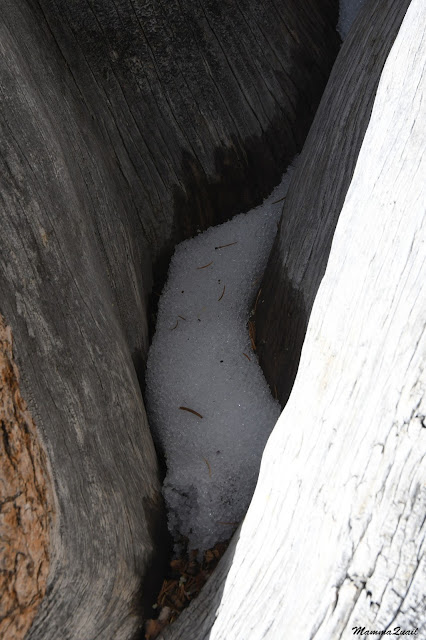 We spent a lot of time near the Patriarch. Meanwhile, a small group of people came along the path and joined us at the tree. We chatted a bit, and took each other's group photos. Then said goodby and my friend and I departed and headed back to the road whence we came. 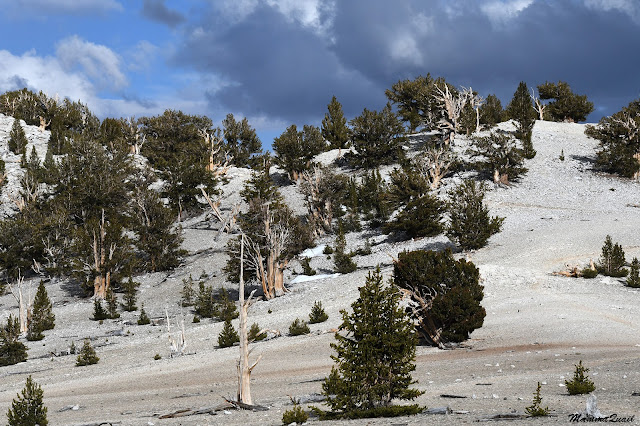 The clouds grew more massive and I wondered if it's going to rain. It certainly got colder. The clouds, however, were very impressive and pretty too, and cast an interesting shadow pattern on the hill. 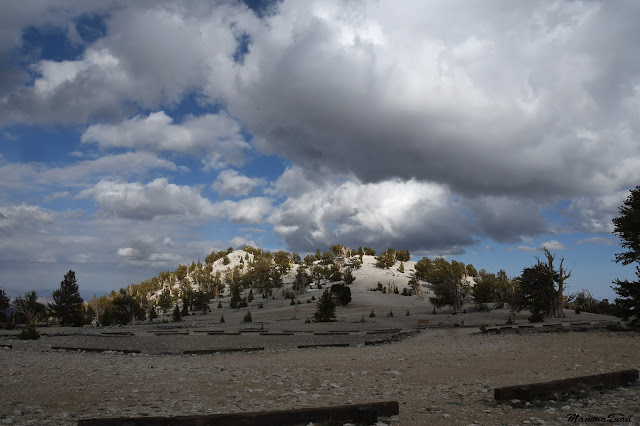 I wasn't so much concerned about the possibility of rain. I was, however, much more worried about the approaching sunset. I really didn't want to be driving down in the dark. 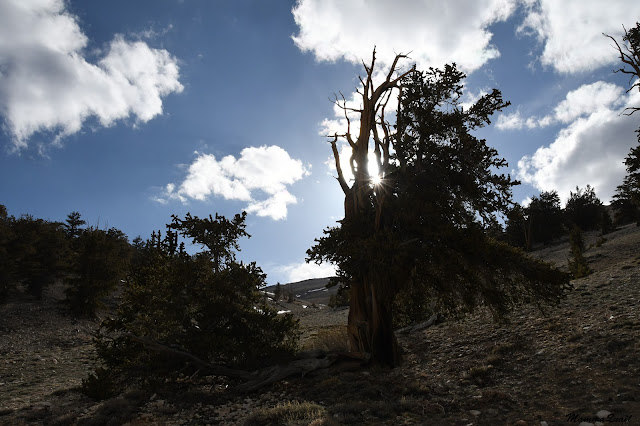 It did rain. Not exactly where we were, but nit too far from us, in the southeast. I'm amazed at how local these desert rains can be. I wonder how much water actually reach the ground on these rain events.
The sun was very low when we arrived at the car, and we both were very cold. My friend was very quiet and thoughtful. The ancient trees had gotten under her skin. We were both very tired too, for it has been a long and busy day. And we still had the long drive down and out of there. 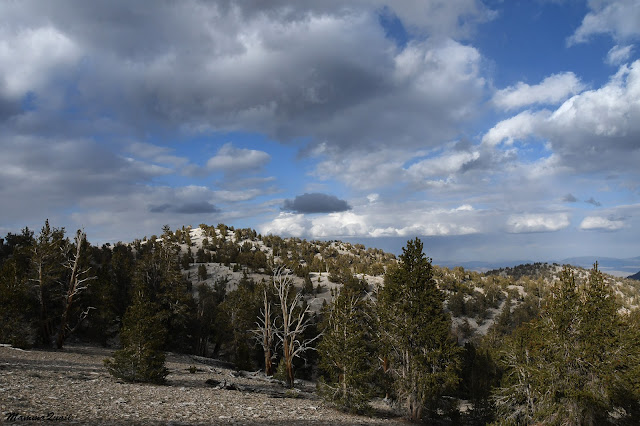 There is a warning sign at he beginning of the road leading from the Schulman Grove to the Patriarch Grove. The sign urges slow driving and warns that the road gravel is very sharp and that tire punctures are common. There's no cellular reception along the road, said the sign (true), and towing costs can exceed $1000 (thankfully we have no confirmation for that). Driving up I did drive very slow and careful. Driving down, however, I allowed us a bit more speed, trusting the tires to hold. Thankfully, we were not the last vehicle there. I hope that the people who did remain behind ys made it downhill safely. 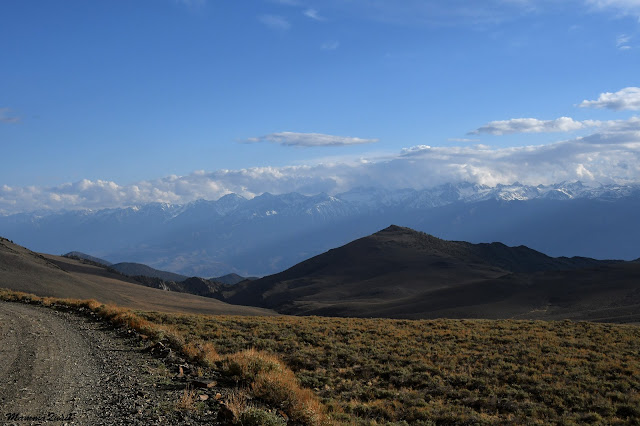 The big bonus of the drive back was the magnificent view of the Sierra Nevada to the southwest.
It was night by the time we rolled into Big Pine. A bit later we arrived at Lone Pine where we would stay the night. It was the end of a magnificent day at one of the most interesting and beautiful places in California, and I'm very glad that my friend got to see it too.
Many thanks, Anenet, for giving me an opportunity to visit this place again, and of course for identifying all the little belly flowers we saw!