477 years ago a young explorer landed his boat ashore and climbed the high place that overlooked a large, beautiful Bay. This man was Juan Rodriguez Cabrillo* (João Rodrigues Cabrilho**), the first European to have set foot on the shores of North America's West Coast. The hill he had climbed is now Cabrillo National Monument, with Cabrillo's memorial statue overlooking the San Diego Bay.
Cabrillo National Monument was the first site on our quickly thrown together vacation plan for Thanksgiving week of 2018. We arrived there after a long day's drive and a restful night at Chulla Vista. Our intention was to check out his historic place, hike an easy trail, then go to the bird preserves near the border. When we arrived at the visitor center however, we are informed of the nice Point Lome tide pools within the Monument area, and that low tide time was due just about when we thought we'd be done with our hike. And so we stayed at Cabrillo National Monument most of that day.
* The name as it appears in the park's brochure
** The name as it appears in Wikipedia
At the start of November 2018 we still had no plan for our Thanksgiving Break. After some debate we decided to go south instead of north, and by chance that was the best choice because during the three weeks that passed between our planning and our trip the devastating Camp Fire was crippling most of Northern California.
Southern California had its own devastating wildfires going on at that time, burning through the coastal communities of Thousand Oaks and of Malibu. By the time we arrived at San Diego the southern fires were mostly contained but not yet put out. The smoke was heavy in the air all the way to the Mexican border and clouded all of my wide view shots.
From the deck outside the visitor center there's a spectacular view of the San Diego Bay. We were there in perfect timing to see the USS Zumwalt going for a cruise. This is s stealth ship - designed to show up on the radar as a small boat. Very nifty!
Pappa Quail added the anecdote that it's former captain's name was James Kirk, which makes it all too precious :-)
Views aside, we were there to hike. At the visitor center we got a map and directions and headed down to the Bayside trailhead. To get to the trailhead we had to go by the old Point Loma Lighthouse. I wanted to go inside to take a look but Pappa Quail wanted to get on with the hike.
A red-tailed hawk circled overhead, checking out the scenery below.
Late in November, I did not expect to see anything blooming. In fact, there was very little that was green there at all. Whatever was seen - the chaparral bushes -were seeding.
But even much of the chaparral was dry, and appeared dead. It could be the prolonged drought that the area has experiences. Below a certain elevation the chaparral was green, however. Maybe there was less of a water shortage there?
The apparently lifeless bushes made an excellent perch for a Say's Phoebe on the lookout for bugs.
From the old Point Loma lighthouse we went down the road to the trailhead. The Bayside Trail is a wide and comfortable gravel road cut into the sandstone from which the hill is made and through the chaparral that covers it. 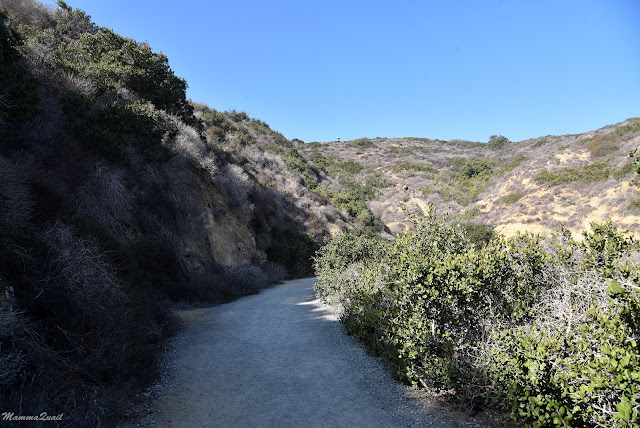 In places were the stone is exposed the rock layers can be seen. Layers of minerals and metal oxides paint the exposed layers with bright colors. 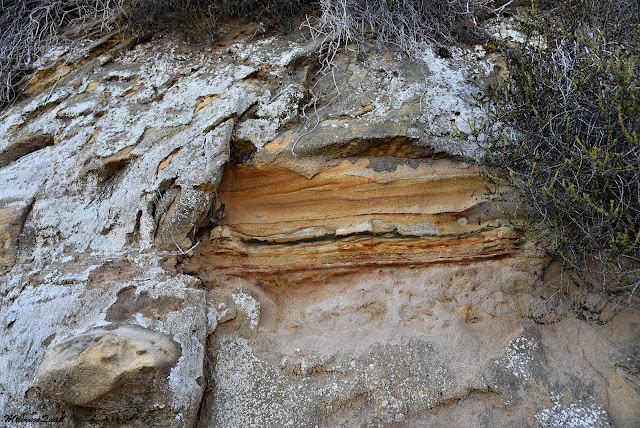 From further distance the intricate erosion effects can be seen in the bright, exposed sandstone. 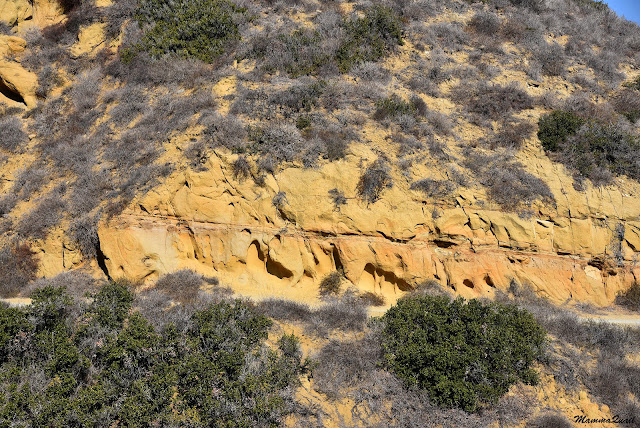 We walked downhill at the quick pace. There were very few other people on that trail and we nodded each other while passing one another on our way down to the water. 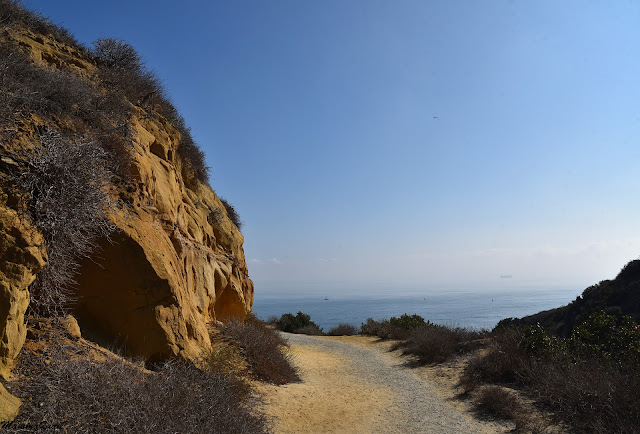 Pappa Quail and the chikas spotted a while bee hive and hurried down the trail. I stopped and looked. The bees were quiet and content and didn't mind me watching them fro a few long minutes as they were going in and out of a small hole in the sandstone.
Pappa Quail wasn't interested in the small flying creatures. He was admiring the pelicans that kept passing above us in small formations.
When we hike as family Ii usually let Pappa Quail and the elder chika to do all the bird photographing but I happened to chance on a cute brown bird in the bushes while they were already further down the trail so I snapped a few shots.
The trail was curving around the hillside and we were going north now, looking right into the mouth of the Bay. From that spot I could see that the trail will not lead us all the way down to the water and I was a bit bummed about it. I wanted to get my feet wet. 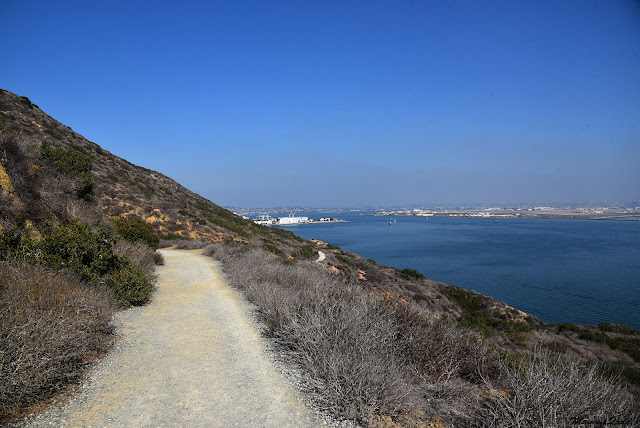 As I thought, the trail ended well above the water at a locked gate with a 'End of Trail, No Trespassing' sign. I few yards before that gate there was a bench and we all sat there and gazed longingly at the emerald water below us. 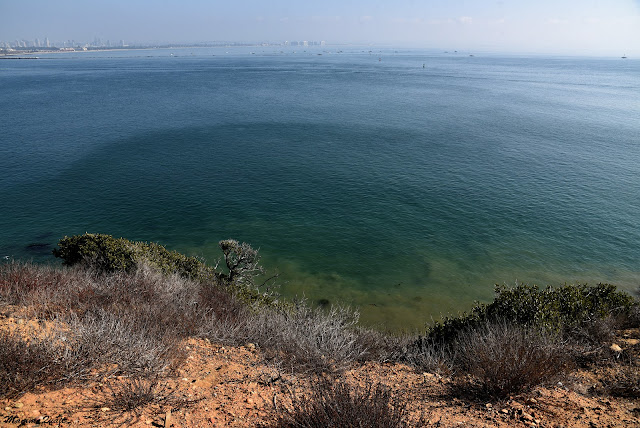 We hanged around the trail end for a while, not very eager to start going uphill again. There was no particular landmark there, just a nice view and some cute nature gems, like this pretty agave plant that was growing right at the edge of the trail near the bench.
Another Say's Phoebe (or perhaps the same one we saw near the trailhead? landed nearby and got Pappa Quail's attention.They are pretty bold for such small birds, perching out in the open where not only us but also raptors can see them. But they are quite agile fliers and as long as they aren't caught by surprise they can outmaneuver most any bird of pray. At least for the short distance it would take them to dive into the chaparral.
The sand documented bird activities from earlier moments. Possibly that of a towhee.
While we were taking our time at the end pf the trail a small armada of boats that looked as if escorting a larger ship made its way into the bay and I paused to look at them, a part of me wishing i was on one of these boats. 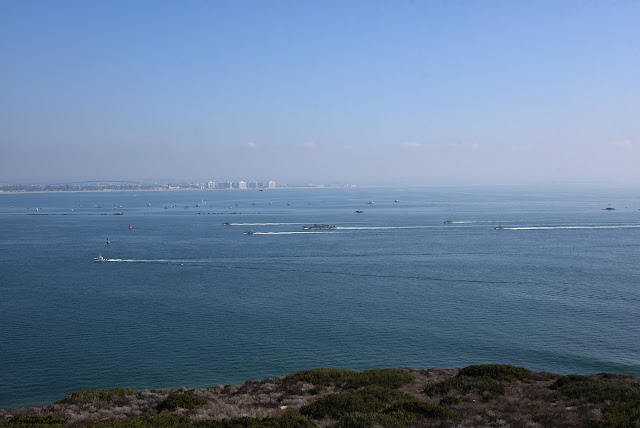 Closer to us were a few fishing boats followed by the signature gull envoy that were trying to get some of the booty. I could almost hear the "Mine! Mine! Mine!" of these birds. 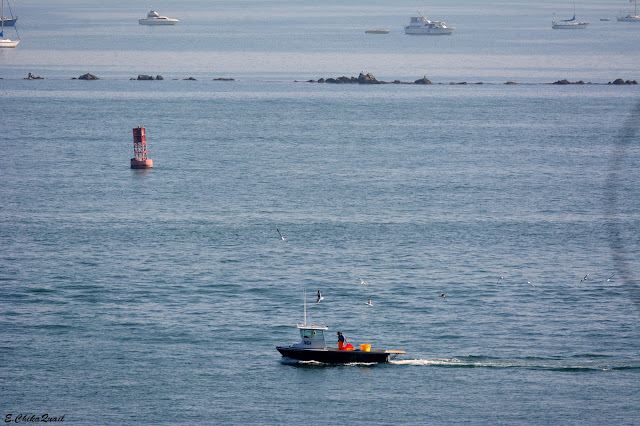 Eventually we did get going again, clambering uphill on the same trail we came down on. It was an opportunity to take a second look at some of the interesting sights we had missed going down.
We came across a few more hikers who were on their way downhill. Among them were three Hare Krishna guys dressed in bright orange and wearing sun protection over their shaven scalps. They were young and vigorous, and made it all the way down and back up, meeting us again as we stood panting at the top of the trail. At that point the elder chika asked them why they were dressed the way they were and we all listened politely to a short lecture about the Hare Krishna and their philosophy. 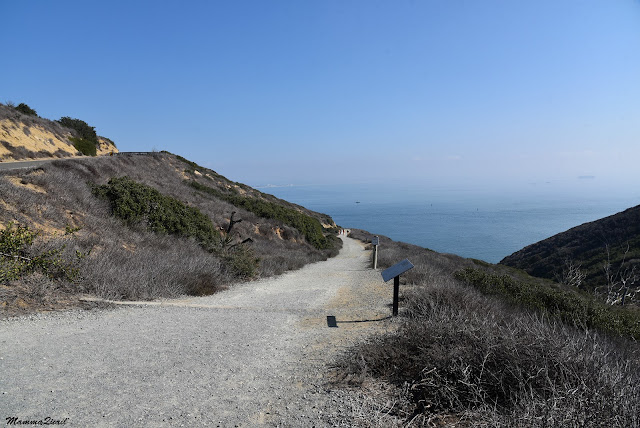 I lost interest in the religious discussion fairly early on and walked aside, where I discovered the only flower that I've seen that entire hike: a single inflorescence of a bush sunflower!
When we got near the old Point Loma lighthouse again Pappa Quail took the chikas to the visitor center to give them snacks while I made a quick visit to the old lighthouse and crammed myself in the narrow circular stairway with a few other visitors to take a look at the beacon through the grate that blocked our way from going all the way up.

When I rejoined my family I found that the elder chika had admired a cute California Towhee that seemed to have been admiring her too. I also found that a small Hare Krishna booklet had somehow appeared in our car. I suppose maybe I'll read it some time for the heck of it.
Now it was time to hurry everyone into the car and drive downhill to the west shoreline of Cabrillo National Monument to catch the low tide at the Point Loma Tide Pools.