The best distraction from actual hiking is the exploration of natural wonders such as tide pools. When we learned upon arriving Cabrillo National Monument that there are nice tide pools there and that low tide is expected in the afternoon we quickly dropped all our previous plans for after our Bayside hike. In stead, upon completing the hike we headed to the tide pools area to check it out.
This wasn't what I normally consider a hike because the walk the parking lot is very short. Despite the popularity of this place we were fortunate to find a parking spot that allowed us to minimize the hike and maximize our time at the pools.
It's a short walk down to the tide pools and while Pappa Quail and the chikas hurried down the paved trail I paused to look around a bit.
Right over the tide pools - a reminder sign for people to leave empty shells at the beach because they are recycled by hermit crabs who use them as homes. 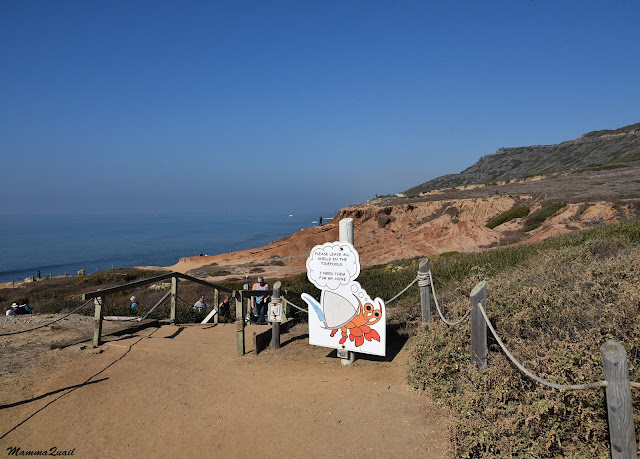 The trail ends in a sort of high natural rock platform that overlooks the tide pools. By the time I got there the chikas were already down in the main area of the pools. I do not post a photo of this area here because all that can bee seen in these photos are the gazillion people that were there too that day. Focused my attention a little further out where the pools end and the ocean begun.
The beautiful layers of sandstones are exposed by erosion.
Interesting rock formations add to the geological beauty of this place. Some of these are the work of water and winds. Others, as I've seen lower by the tide pools, were made by mollusks. 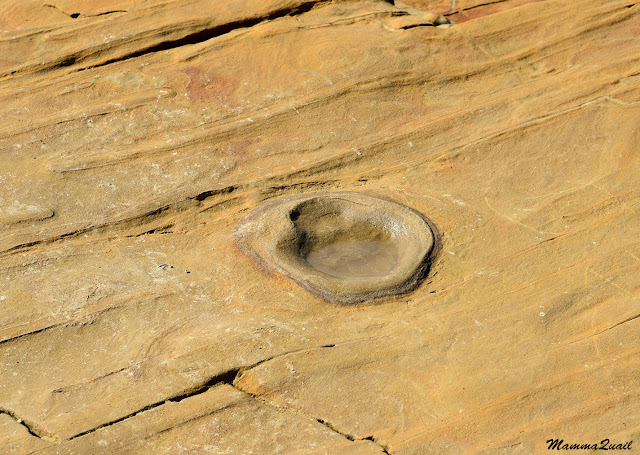 I climbed down to the main area of the tide pools. My first challenge was to find the rest of my family in the crowd. It took me a while but eventually I detected the younger chika as she crouched over a small pool with hermit crabs. She informed me that the elder chika went around the big rocks in the deeper pools and that Pappa Quail went with her. I sat with my young chika for a some time, then wandered off to do some exploration myself. My other challenge was to get wide shots with as few people as possible. Later, I even had to crop those. It was really busy there that day. 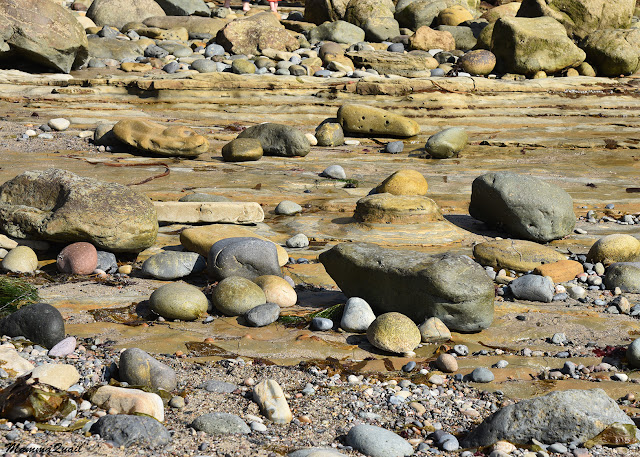 Other than people, hermit crabs were the most active beings in the tide pools. It is, of course, their home, unlike the human visitors of Point Loma. Soon I, like my chika, was couching over a tide pool, mesmerized by the movements of the hermit crabs as they glided to and fro in the warm, shallow water, going about their business.
I found Pappa Quail as his usual pose of aiming his big lens camera at the sky. Gulls can be somewhat challenging to identify, especially when their legs are hidden. Even more so with the background sky so murky with smoke.
Pappa Quail pointed at where the elder chika was. To get there I had t climb the higher platform and down over the other side. This area was more into the ocean and the tide pools there deeper.
There were much fewer people on that side of the rock platform. It was harder to climb down there,  and the pools were deeper and more frequently washed by the waves. But it was a much better exploration experience.
As I was climbing down (descending mostly on my behind) I paid attention to the critters stuck to the rocks. The move around during high tide and when the water recedes they adhere to the rock face to protect themselves from dehydration as well as predators. 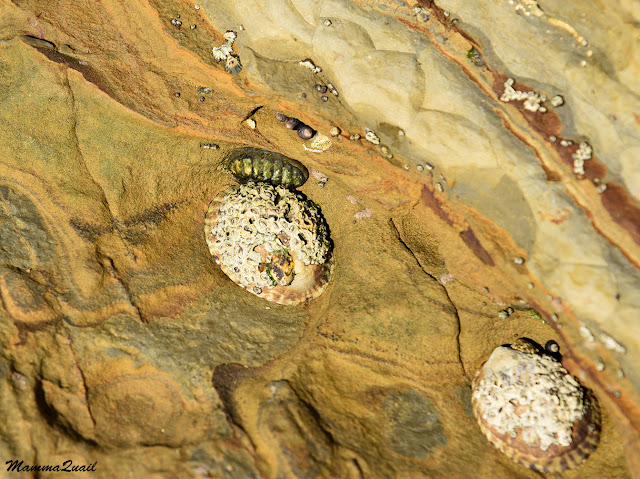 Many of the rocks had round depressions done by acids secreted by mollusks. I don't know how long it takes them to dissolve a hole like that or wether it's done by a single animal or more. I'll look it up in the near future. 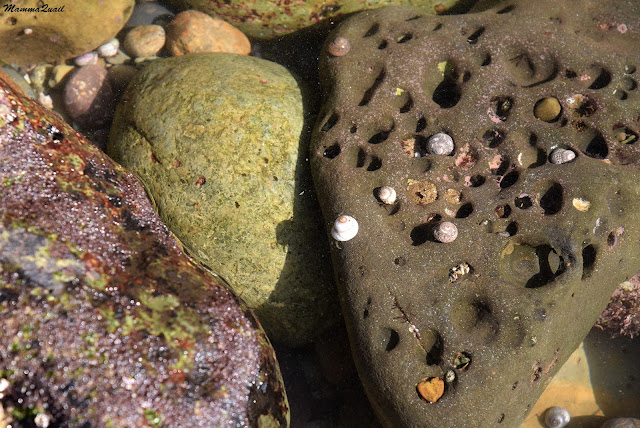 Some of the creatures I found at the pools were very familiar to me from the tide pools in Northern California.
Others beings were new to me. This one looked like a coral but apparently it is a colony of sand castle worms.
I walked slowly in the tide pools, treading carefully as to not damage anything. Little fish swam from beneath my feet and rock crabs scattered from the rocks as I approached. There really is no way to tide pool with absolutely no disruption of the critters' lives there but I did try to be as inconspicuous as I could. 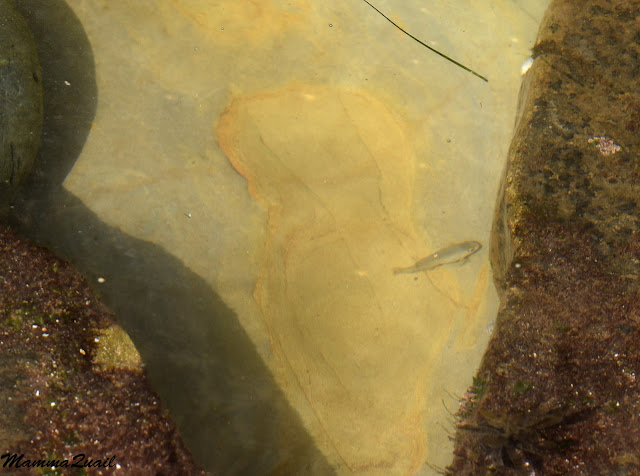 Every now and then I got rewarded by a crab that didn't run away from me but continued grazing peacefully on the sleek rocks.
The elder chika was busy too. As interested as she was in the little pool habitants she was more focused on the birds and got quite close to some of them.
Pappa Quail on the other hand, remained u on the rock platform and used his zoom to get optically close to the birds, photographing them from above.
And while we all saw and admired the dolphins that graced us with their presence, Pappa Quail was the one able to get the photos.
The time passed and the tide started moving in again. More and more waves got over the rocks and washed into the tide pools. 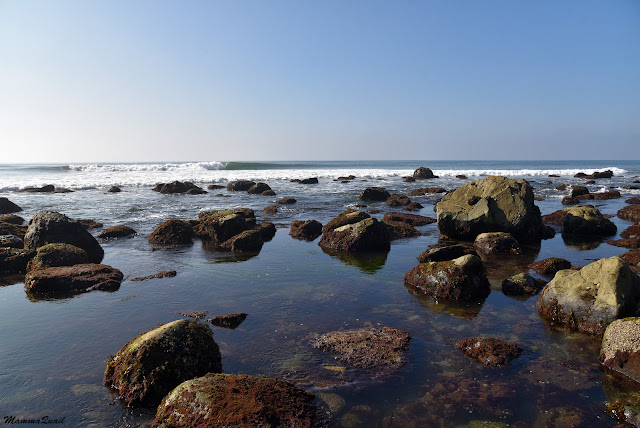 Waves of green grass moved gently with the water. These were bunches of surf grass - a true plant, not an alga.
Besides the surf grass there were many species of algae, or seaweed, all over the place. Although nt considered taxonomically as 'true' plants, they are like plants to me and I love them.
Small groves of red algae waved back ad forth with the water. The movement was so mesmerizing I could sit there and watch it for a long time.
Outside the water the algae cover rendered the rocks very slippery and I had to be very careful about where I stepped, not only to protect the critters but also to avoid falling down. There cannot be haste when tide pooling, nor should there be any.
I looked up and saw that both chikas had joined Pappa Quail on the high rock. Pappa Quail called me, saying it was time to go if we wanted to go anywhere else that day. So I slowly made my way up the sediment layers, pausing to appreciate the pretty clumps of barnacles attached to it. Soon the high tide would cover them and they'll open up and send their thin, filtration 'arms' out to grab what morsels the ocean had brought them. 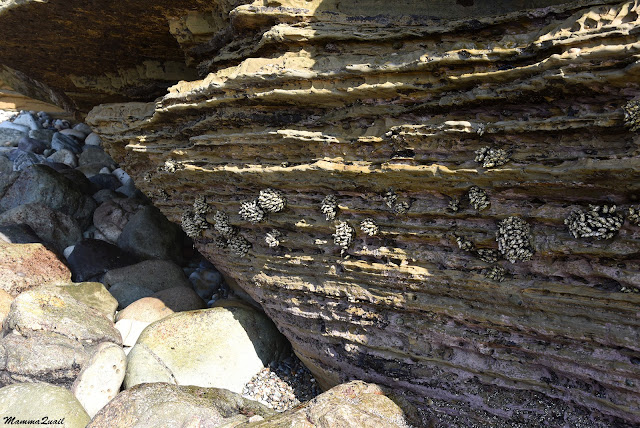 Our way back to the parking lot was much quicker than our way down to the pools. I did pause a little to look at one thing or another, but when I got to the car I saw that all my family were already inside and ready to go.


It was a very good place to visit, both the hike of the Bayside Trail and topping it off with the wonderful tide pools. All and all, the day was pretty much done. We did try to get to the nature center across the bay but it was closing as we got there, so we settled for a short sunset walk by the water and when daylight faded we were off to Chula Vista, where to spend the night. On the morrow we had planned to visit Border Fields State Park and had high hopes to see the famed magpie jay bird.

Many thanks to members of the California Native Plants Society for their help in identifying plants and algae!