Getting Into Mountain Mood: The Hike to Echo Lake at Lassen Volcanic National Park

Every year I lead a group of families on a camping/hiking trip to Lassen Volcanic National Park, showing off my favorite place in California which I find so beautiful and inspiring. Each time I try to have some personal time to do some exploration on my own. Last weekend I went up from Summit Lake to Echo Lake and back. It's a trail I hiked twice before, and I also include here a few photos from my last year's hike of this pretty trail.

The official trailhead is a bit north of Summit Lake but I found parking in the day use area of the South Summit Lake Campground so I begun my hike right there at Summit Lake.
Summit Lake is a lovely shallow lake that invites swimmers and kayakers to enjoy its water. I enjoyed it from the shore.
Between the campground and the lake there is a beautiful meadow that was filled with wetland wildflowers. Among these orchids which were just beginning to bloom. Last year they were at their peak at the time of my visit:
Last year I also saw the small mariposa lily blooming at this meadow. This year I didn't see even the buds.
What I did see this year were many shootingstars, violets, and buttercups. And many butterflies too. 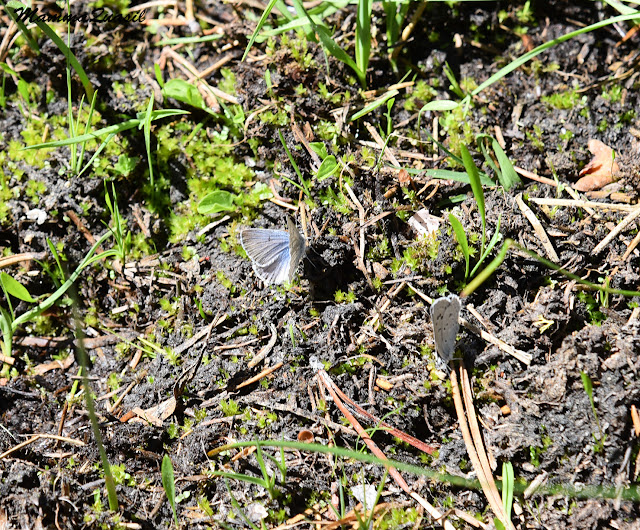 For the first half a mile the trail follows the curve of Summit lake, meandering through the trees. The forest in the higher region of Lassen Volcanic NP is of mixed conifers well spaced apart, so there's lots of sunshine and bits of view in between the trees. 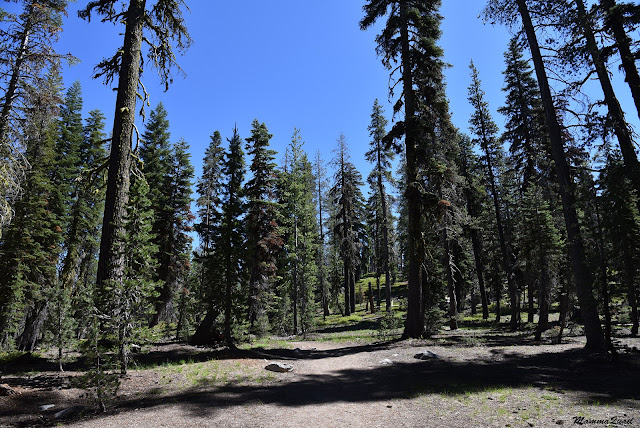 There's also good undergrowth ground cover there. Manzanita mostly, but many other plants as well, such as this lovely lupine.
The manzanita formed a contiguous mat covering large areas of the forest floor. It was at peak bloom and the green mat looked like it had been dusted with sweet smelling snow.
Swarms of dragonflies were swooping by me. Many of them in pairs, enjoying spring activities. 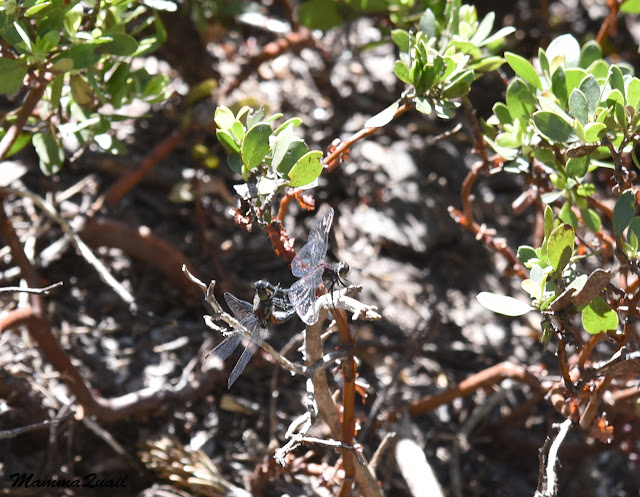 The dragonflies were coming in large numbers from the lake. Just before the trail fork I went down to the shore of summit lake where I had a grand view of Lassen Peak.
After the turn to Echo Lake the trail started going uphill. Mildly at first but getting steeper. In the beginning of the ascend I was still shaded by more dense forest. Conifers often look like one another, but some do get interesting shapes as they grow. I think this young one in the photo below will turn into a fine-shaped tree in a few decades/centuries. 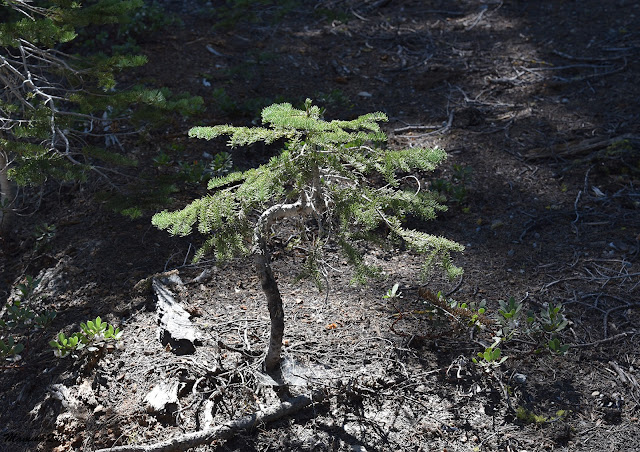 The higher I climbed the thinner was the forest and thicker the undergrowth bush cover was. I also had to pause and drink more often for it was getting quite hot. 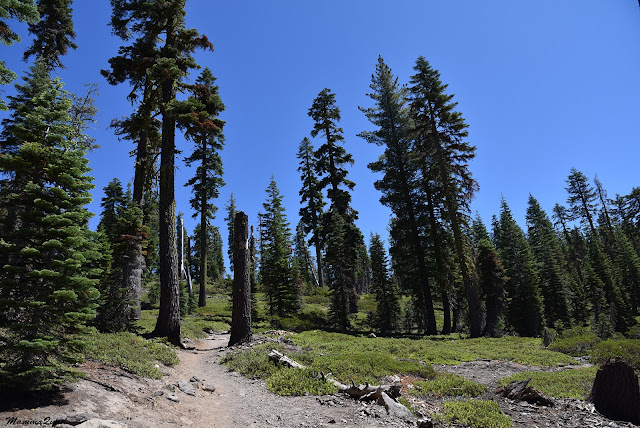 Although the forest looked healthy I did see some trees that were hit by previous years drought and possibly other stresses. 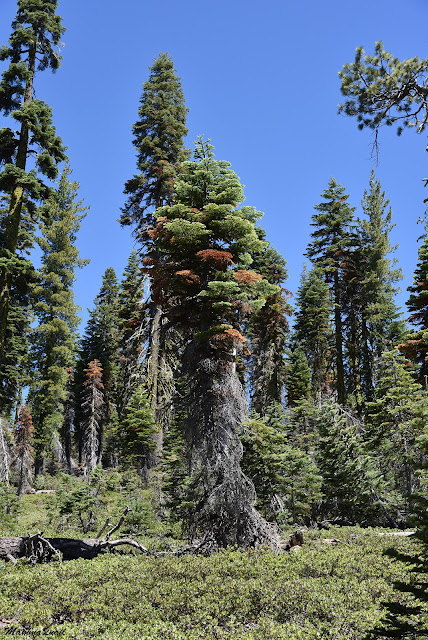 There were also many fallen trees strewn around. Decomposition is slow up there. Harsh, dry conditions slow it down. But that doesn't stop new life from starting and new trees to sprout from the crumbling stumps of their fallen predecessors.
The trail reached it's highest point then started descending down toward the lake. At some point I passed the trail fork where the big loop trail of the inner park lakes connected. I hiked the entire loop many years ago with Pappa Quail and I longed to hike it again, but this wouldn't be the day for it.
There were many other wildflowers blooming in the area besides the manzanita bushes. They made a good distraction for me.
I was surprised at how busy this trail was. There were many people walking ahead of me, behind me, leap-frogging me, and of course coming across me on their way back. it was actually a challenge to get any people-free photos of the trail. I did manage a few, though.
The trail down to echo lake was flanked by bushes that weren't manzanita. In fact, the smell of their bloom was very familiar and very strong. These were ceanothus shrubs. 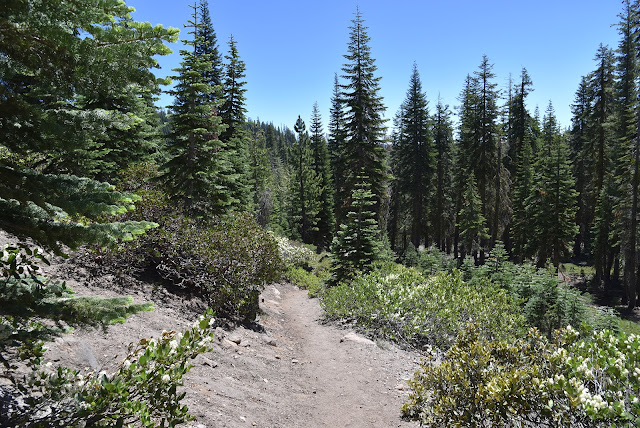 I hurried down the path to Echo Lake and immediately had to apply mosquito repellent. There were a gazillion of them there!
There were many dragonflies there as well, although they seemed to be of a different species, and they were not yet engaged in pairs. Rather, they were busy metamorphing into their adulthood. There were so many of them that it seemed as if every other blade of grass had a metamorphing nymph clung to it. 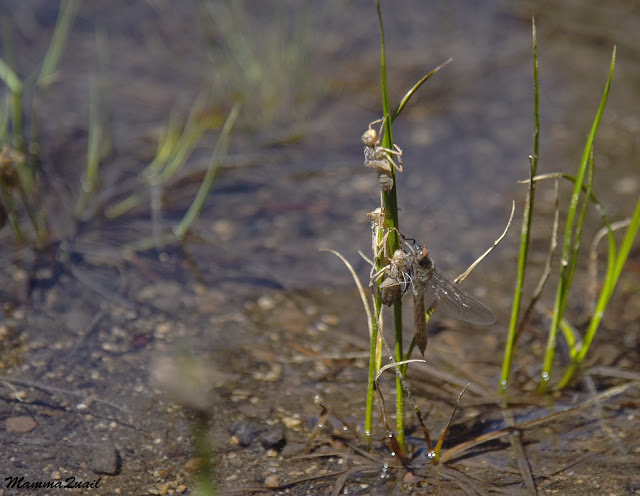 On my hike there last year I was there with my family including Grandma Quail and my nephew. We got to the lake and soon after headed back without any further exploration. While I didn't have the time this year to hike any longer as well, I did have a few minutes to go to the far side of the lake and sit there for some time, away from the numerous people that were frolicking by it's western shore.
I sat there by the lake for a while, looking at the nascent dragonflies. The metamorphosis took a very long time. Too long to follow one from beginning to end. Fortunately, there were metamorphing dragonflies on almost every blade of grass poking through the water surface, so I got to see and document the entire process through many different individuals.
I was sitting near spreading shrubs of mountain heath, some of them already in bloom.
Last year Pappa Quail was planning his own bit of writing about woodpeckers and sapsuckers. He was fascinated by a tree we found at the lake shore that was drilled through and through by a sapsucker in preparation for winter. He asked me to photograph that tree and I happily obliged.
Last year was a dry year and, although we were there earlier in July there was no sign of snow on the ground. This year however, snow was copious and a few small patches were still present on the ground even late in July.
Many more people were coming down the trail as I started to make my way back uphill. I used a momentary gap between the group to capture the trail with its beautiful ceanothus flanks. The scent of the blooming ceanothus hang sweet in the air and I inhaled it deeply, savoring each breath. 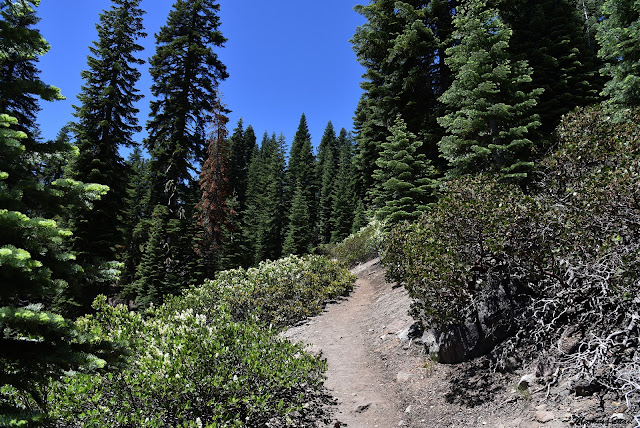 Commonly named 'deer brush' this ceanothus reminded me more of fluffy little clouds. It also attracted many bees so I kept a respectful distance from these pretty bushes.
Up at the crest of the trail and now facing west I had a very nice view of Lassen Peak, still wearing mostly white and looking majestic.
From there is was all downhill hike and at a very quick pace. Because I was backtracking the same trail I went out on I didn't pause as much. Only for sights I had missed on my way up.
Between the trees I caught a glimpse of Hat Mountain. Many years ago before Pappa Quail and I became parents we hiked the entire 12 mies loop of lakes with the trail going right by Hat Mountain. It was easier then to see the shape that gave it it's name.
I kept on downhill, the trail melting away under my feet. Before long I was down by Summit Lake once more. I then slowed my pace looked for more flowers along the lakeshore.
Last year Summit Lake was full of people recreating in the water. This time around the lake was people free and as calm as a mirror. I meandered slowly along its shore toward the trailhead.
Between the lake and the trailhead is a small, lush meadow. At the far side of the meadow a deer walked slowly across the vegetation.
I decided I could dedicate a few more minutes to take a closer look at the meadow and what grew in it.


Eventually though, I needed to complete my hike and drive on to the Loomis Visitor Center where I was to meet with the families of our camping group and show them around Manzanita Lake before heading on to the campground for the night.