Where Gold Set the Tone of the Town: Hiking the Dragoon Gulch Trail at Sonora

After conceiving the idea of taking my family camping group to California's Gold Country I set out scouting for nice family-friendly hiking trails. I found plenty beautiful trails and I already wrote here about two of them - the lovely Red Hills Area of Critical Ecological Concern and about the wet adventure of the Natural Bridges Trail. But perhaps the most surprising discovery I made was of the Dragoon Gulch Trail which goes out directly from the town of Sonora and provides some of the most beautiful sights I've seen on my trips to this area.
The trailhead is right in the middle of town, within walking distance from the historic downtown. The first time I got there the parking lot was icy and I had to watch my step to avoid slipping. The air was crisp and refreshing and a thin layer of snow rested on the ground like a white angelic mantle.
I crossed Woods Creek and found myself an another, large parking lot. It took me a long moment to figure out where I was supposed to go - there were trail signs painted on the asphalt but they were partially covered with snow ... When I figured out what I needed to look for I followed the trail signs along the city streets for about a third of a mile until I found where the trail enters Dragoon Gulch. The lower part of the trail near the creek was too paved with asphalt and to my relief it was clear of ice.
I still had to cross an occasional patch of soft snow. Receding snow dusted the trail sides, revealing deep, earth colored layer of fallen leaves.
I insert here a photo I took f that very place on the following April, merely two months later. How big was the change in appearance and over all colors!
Back in February, the creek was flowing nice and strong, fed by the melting snow. The temperature rose as I walked and I too was heating up and took off my coat, shoving it into my backpack. 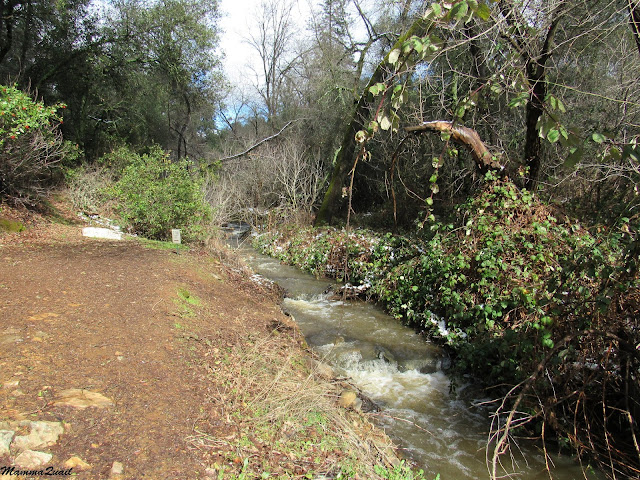 After less than half a mile the pavement ended and the trail turned in a sharp switchback uphill. Through the thick mat of composting fallen leaves poked the early greens - mosses and lichen. 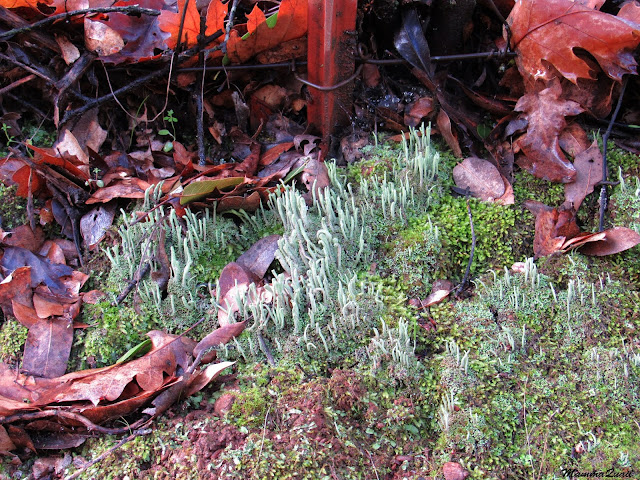 Lichen covered also rocks and branches, and there were many types of them, in many colors. They are very fascinating entities - a symbiotic bonding between algae and fungi, each bond creates an independent biological entity with distinct traits and appearance. Thy are probably the most enduring eukaryotic beings, and the likely ones to begin it all again should our current ecosystem collapse.
I made quick progress uphill along the mildly-sloping trail. For the most part I was walking under the canopies of oaks and tall manzanita bushes but every now and then the canopies opened up and I was bathed by sunlight. Light clouds passed overhead but over all the day was clear and bright. 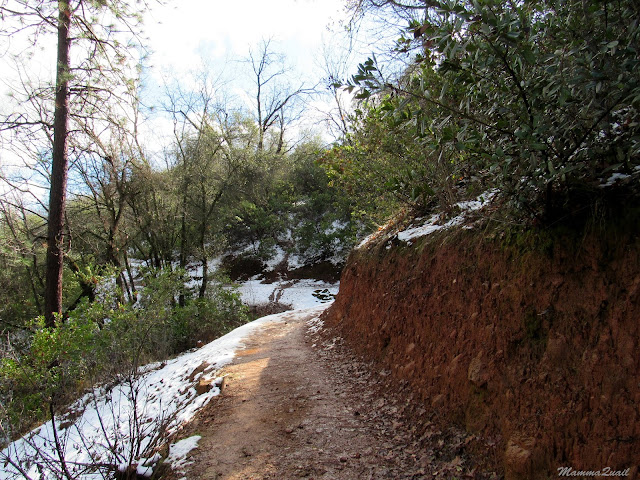 There wasn't much greening yet other than the mosses but I could see the early signs of spring in the germinating acorns of the live oak. 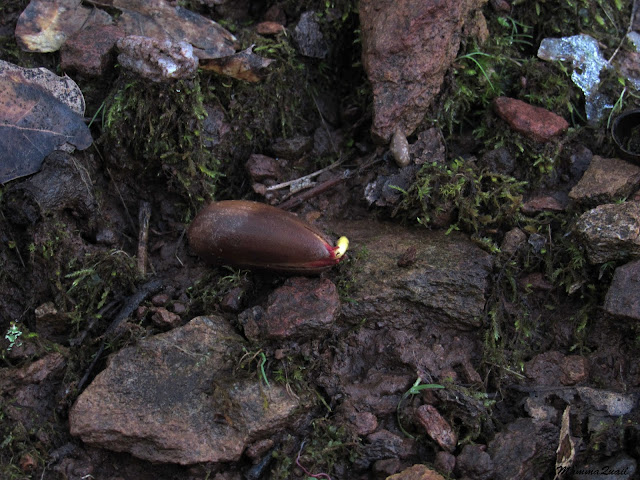 Jumping two months forward, the place was alight with early spring bloomers.
On the later, April hike I was there with my chikas and a family of friends, and I was happy to show them the beauty of this place and the pretty flowers that grew there.
Although further into spring there were not very many wildflowers along this trail.
But back in February the intense red color came from Manzanita stems and from the brilliant crimson berries of the toyon.
One of the things I cannot really convey here is the rich fragrance of the soaked earth, spiced by the composting leaves and the mushrooms that popped all over the place. Its a special kind of winery perfume that is unmatched by anything else and what makes wet winter hikes a very special treat for me. 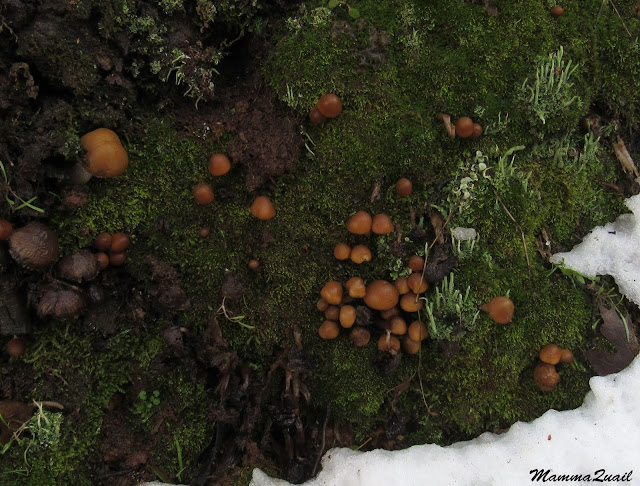 Cushions of dark green moss softened the rocks in appearance and to touch. Where the earth wasn't covered by fallen leaves it was patched by the lush winter moss.
Manzanita is classified as a bush because it has multiple stems and branches rather than a single trunk but they can grow quite tall, much taller than me. Their bright red bark stands in beautiful contrast against the snow background but nearly blends with the ground cover of fallen leaves.
The trail was meandering, turning north and south in a few wide switchbacks. I followed the curves until I arrived the highest trail intersection and the choice of going uphill further to the summit or down and back to the creek. Up till then I was alone on the trail but there I came across a young couple who were debating between them where to go next. Eventually they decided to go downhill. 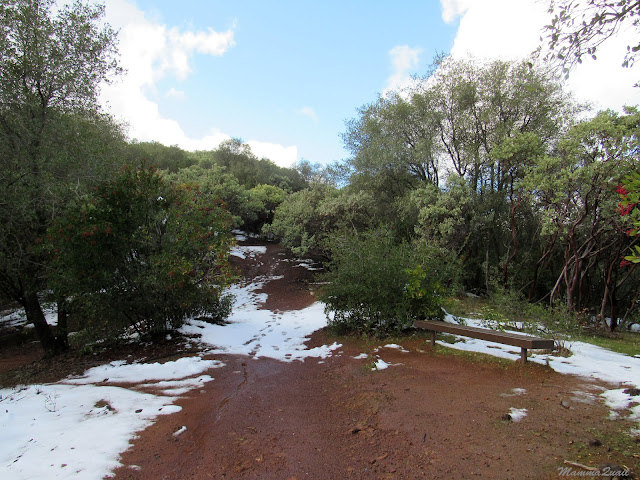 I continued uphill where there was still much snow left on the ground. The air did warm up however, and I no longer was able to see my own breath. The manzanita bushes seemed lower and sunlight washed the spring-hungry plants and me. 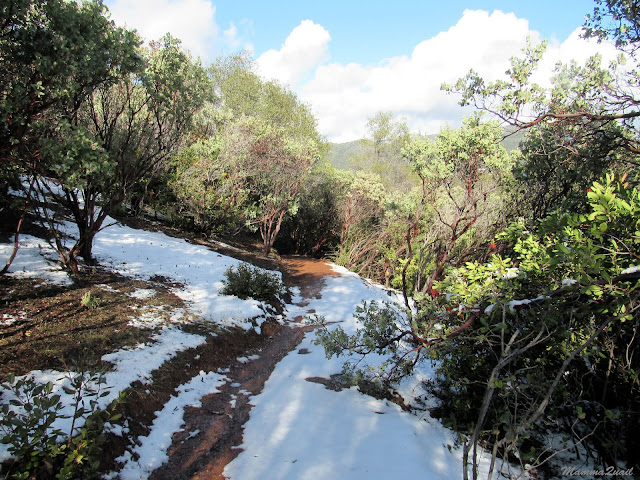 Finally, when the manzanita were at my height level, I could see that they were blooming. The only blooming plant there at that time, but they sure were making up for the lack of others with the mass quantities of their bloom.
I arrived at a small side loop trail with an bench and a vista point. Finally I could see the view around.
Sonora doesn't get snow all that frequently. The winter of 2018-2019 was unusual in that sense - much snow fell on Sonora and it stuck for a while. Much of that snow was there still as I looked over the town from the vista point up the Dragoon Gulch trail. Every now and then the clouds to the east would part a bit and I could glimpse the white-clod peaks of the High Sierra.
Up at the summit there is another bench and a somewhat different view. the bench was too wet and shaded so I sat on one of the rocks in the sun and ate my snack. A sole biker came by, huffing and puffing still from his uphill strain. He passed by me without stopping and continued downhill, splattering wet snow and mud as he went by.
After the biker passed I was back in my solitude and enjoyed the peace and beauty of the place. Eventually I got cold from sitting and started downhill on the rounding trail which by now was all clear of snow and very muddy. 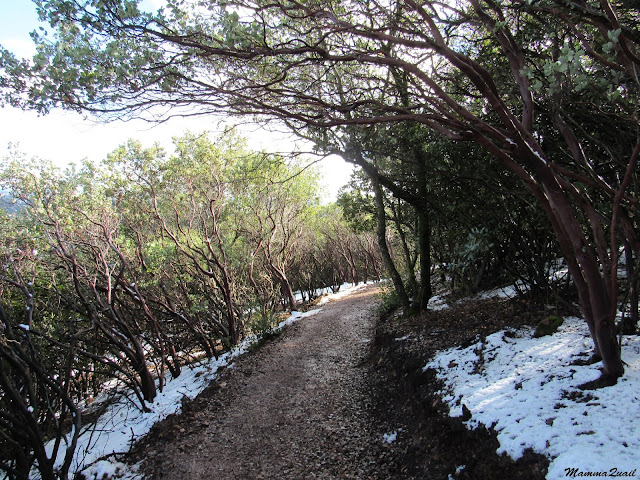 At the turn of the trail I got another view of the snow-covered Sierra foothills. A cool and refreshing sight that now doubt is missed there right now when late August temperatures reach the triple digits there.
Then I hit snow on the trail once more. I was walking down the north side of the hill where the snow hasn't thawed all yet. The white below was matched by the feathery white of the manzanita bloom above the trail. 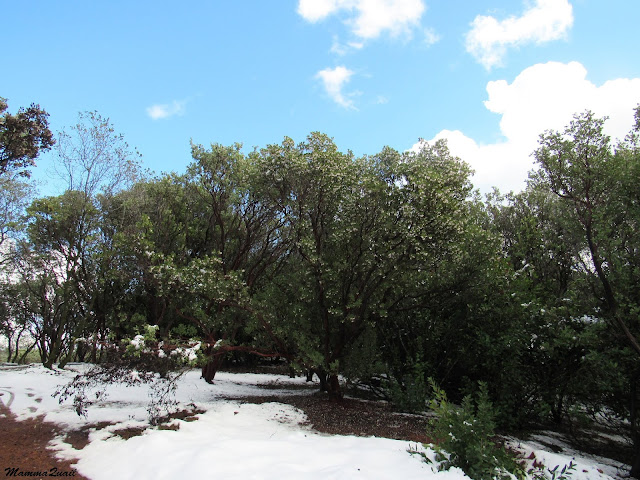 But going down the trail had become a strain. I had to be slow and careful nut to slip in the mud. My shoes soon got covered in in mud and my eyes were down on the ground rather than around on the views.
I made the final turn down to complete the circle. Going uphill were three dog walkers with a group if at least fifteen dogs running about them off-leash and having a lot of fun. The dog walked and I exchanged greetings and got into some smalltalk while a few of the dogs approached me for a good sniff. 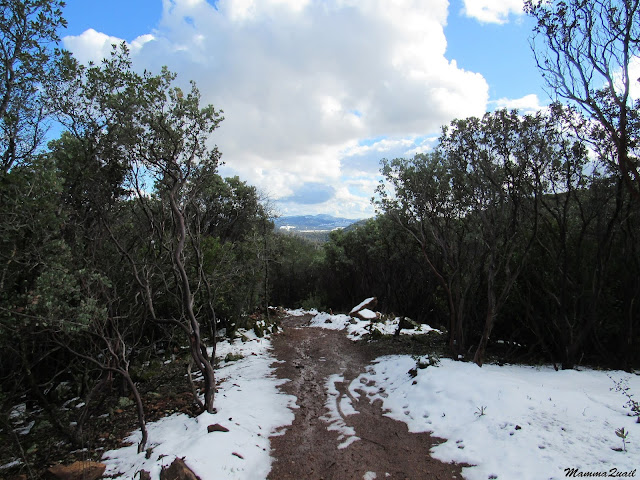 After our paths separated I continued downhill with very few photo stops. By then I started to be pressed on time - I was expected back early in the afternoon and the long drive home was awaiting me. 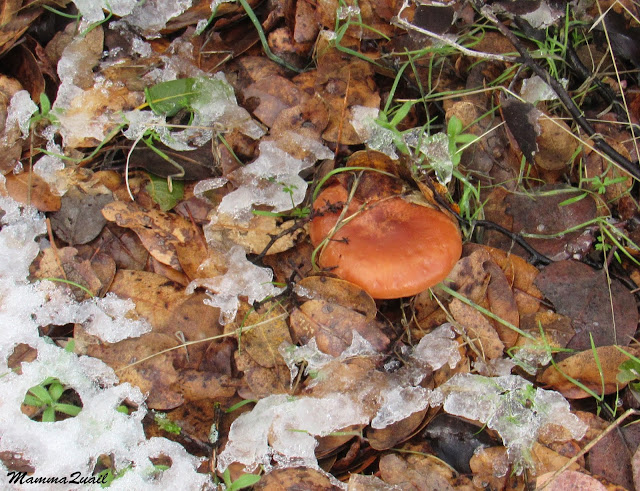 I paused briefly just above the tail merge with the creek  to take a goodbye look and capture the small triple cascade that merged down at the gulch. I would be back there in two months when wildflowers were blooming, the water level lower, and all snow gone and replaces with spring greens. 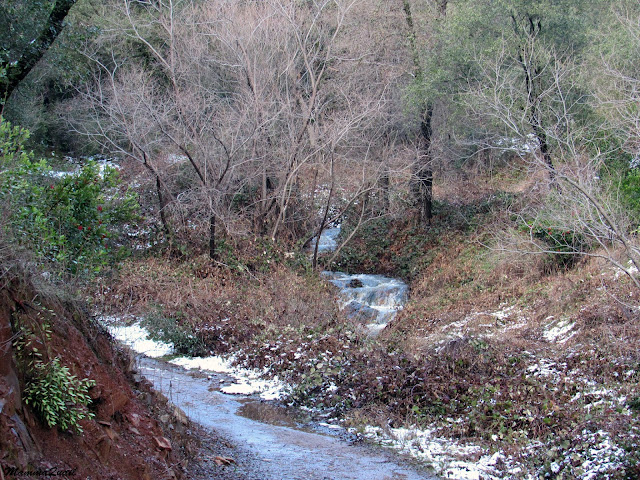 Dragoon Gulch got its name from the soldier miners of the town's gold rush past. This place also saw some gruesome robbery turned murder that went down in Sonora's history of wild western violence. Now, all surrounded by the neighborhoods of this pretty town is this beautiful nature getaway where the sights and sounds of the city don't really penetrate and where I could feel calmest completely immersed in nature, just a short walk from downtown.