Last fall we went on our Thanksgiving vacation to Southern California, traveling away from the heavy Camp Fire smoke that covered the Bay Area and passing through the smoke cloud of the Brush Fire that was burning Malibu down. Rain was due in Northern California and the forecast was for it to arrive at SoCal later that week but on our third day into our vacation it was dry and smoky still.
After spending the previous day enjoying the Cabrillo National Monument hiking trail and tide pools we were ready to go south to our main destination: the Tijuana River Valley and following that, the Border Field State Park, both of which were prime birding areas.
Of the birding hot spots of the Tijuana River Valley Pappa Quail chose to stop at the Dairy Mart Pond. We parked in a small, dusty, and empty parking lot and got out to see a wide, vacant trail running between hedges of tall holly bushes.
We didn't see anything promising, and I admit that I wasn't very eager to hike there. Pappa Quail and the elder chika however, slung their cameras on and started down the trail so me and the younger chika followed.
I didn't expect to see anything blooming there and I was surprised by the delicate pink bloom of the wire lettuce. Things were looking up now.
They were certainly looking up for the birders in our company. Pappa Quail and the elder chika got very excited about a tiny gray bird that hopped in the branches of a drying willow. It was a gnatcatcher, and Pappa Quail explained to me excitedly that there was a species of gnatcatcher living there that he'd never seen before.
As it turned out that particular bird was of a species already familiar to him but that he found out after we got back home.

If there's anything blooming so late in fall it's almost always would be of the aster family. I was satisfied to see another blooming plant, a relative of the coyote brash.
Dairy Mart Pond was to our north but we couldn't see it because of the high bushes that grew near the trail. We walked slowly and leisurely, listening to the little bush birds that were too well hidden to see. The large vultures however, were standing out in the open, sunning themselves, waiting for someone to expire.
A short distance into the trail we came to a blind facing the pond. It's a nice place to serve the birds without alarming them with our presence. 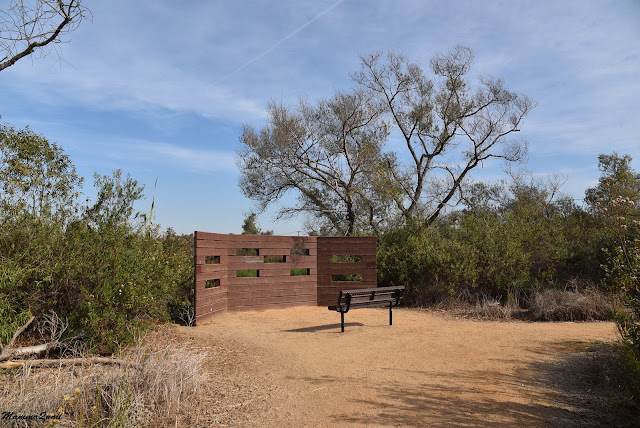 Behind the blind we were finally able to get a view of the pond itself. Sure enough, there were plenty of birds in or near the water. 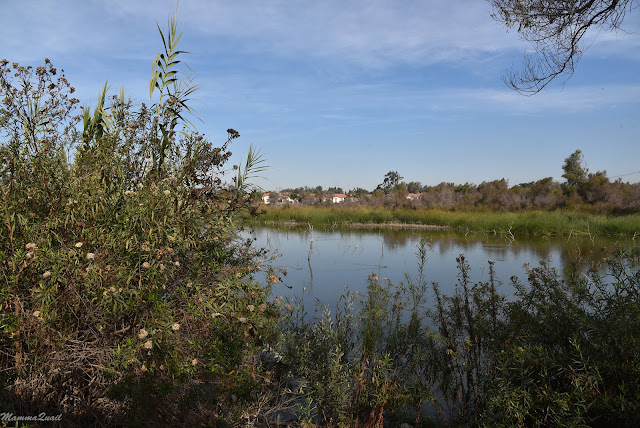 The biggest and most conspicuous birds on the water were the white pelicans. They swam about in small groups, patrolling the water and on a cue, simultaneously dipping their large bills in the water to reach for fish.
There were ducks present there as well. Surprisingly we didn't see the mallards, the most common of them all. The ducks we've seen were overwintering, migratory ducks, like the rusty-colored cinnamon teal.
We accounted for several species of ducks, swimming lazily, drifting across each other. Most of them looked as if they're on their siesta.
A few were busy feeding, but there was none of the frenzy that characterize the eager, hungry crowds that fly in from the north. These birds were already settled in for the winter.
Observing them all were a few night herons, perched on the cattails around the pond or on sticks sticking out of the water.
Pappa Quail and the elder chika were clicking away their cameras. I had the binoculars and was searching for bitterns in the reeds, but the younger chika soon got bored and started drifting down the trail. I followed her and found another late season bloomer:
We strolled along the shore of the Dairy Mart Pond. Every now and then there was a gap in the bushes that allowed us to view the lake and the birds there. We lingered at one of these places where saw an island of dead trees piled together that provided safe roosting for many birds.
The chikas immediately pointed out the egret. It's like a family game - who'd see the most egrets on our family trips.
A few more ducks were hidden between the piled dead branches but it was the drying cormorant that posed nicely to the camera.

On another pile of dead vegetation Pappa Quail noticed a great blue heron. I aimed my binoculars to get a better look ...
... and saw a raccoon walking on that very same pile of vegetation!
In fact, there were two of them, moving slowly among the branches. They were difficult to see and to photograph, but nonetheless, it was an exciting sighting. Certainly more exciting than seeing them there than wandering through our neighborhood at night.

We moved on. The trail was dry and dusty, and not very inspiring. Unenthusiastically I took a few shots of a blooming yellow composite bush only to regret later for nit having paid a closer attention to it - it's a plant endemic to that area.
We reached the corner of the loop where the trail turns south. Before leaving the pond we lingered some time at the nice observation platform to take a last look at the pond. 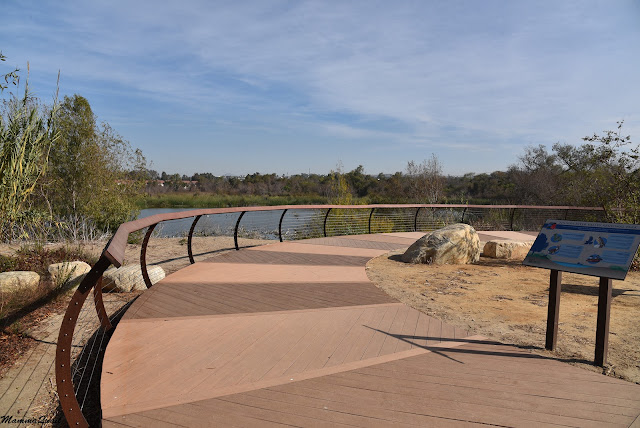 Most of the birds we saw there were pretty much the same we've seen earlier, but then I turned Pappa Quail's attention to a yellowish bird that was perched on a dead branch on a far way vegetation island.
It's a kingbird, said Pappa Quail. But he was very excited, because that particular kingbird is a tropical kingbird and the San Diego area is it's most northern tip of its living range and it was the first time we were seeing it.
After that excitement we turned south, leaving the pond behind us. We walked at a quicker pace now, as there were fewer things to stop and look at. The sighting of a kite hovering above broke the monotonous walk.

Still flanked by tall vegetation that now included also the invasive tamarisk we continued south, trying every now and then to locate some of the tweeting little bush birds that teased us from the thicket.


Success! One of these little bush birds agreed to sit still for a second. It was the very common and familiar yellow-rumped warbler.
Good thing there was an occasional raptor to view because the little birds were quite frustrating.
The trail turned onto a boardwalk. I assume that on the wet season this area is flooded but the wet season hasn't started yet and the ground was bone dry. 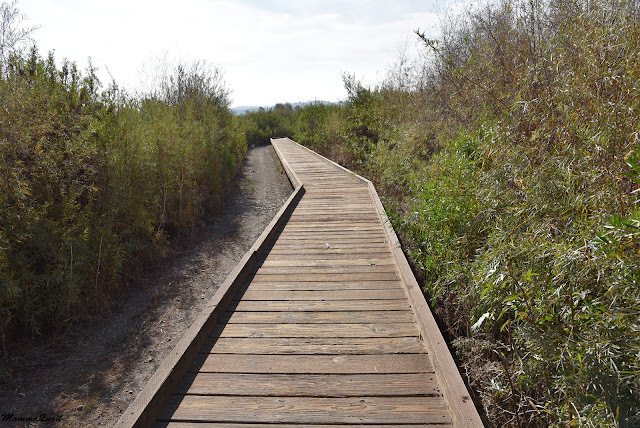 There wasn't much more to see there so we walked fast now, ready to go on our next hike. Once again it was the cruising raptor that ad us stop and observe.
Alongside the trail I noticed more familiar immigrants from the mediterranean: the giant reed. Where I grew up there were large thickets of these and I remember cutting trails that were like tunnels through these where me and my friends would hide and play and then itch all over from the minor cuts and scratches we got from these ...
Another familiar invasive species  I saw down the trail was the castor bean, the plant from which castor oil is produced. Its seeds are very pretty and are used in jewelry making. They are also highly toxic: consumption of castor bean seeds can be fatal.

We turned the third corner and were now heading east parallel to Dairy Mart Road. The vegetation was much lower along that part of the trail and in places I could see the signs of vegetation rehabilitation process.
Near the trail I saw yet another blooming plant, this time a California native - the jimsonweed.
Pappa Quail and the elder chika found the more common kingbird of Southern California - the Cassin's kingbird. It was perched on a bare branch and posed nicely to them. Or maybe it was too hot and tired to move anywhere.

Almost at the parking lot we got to see our first squirrel of the day. Quite surprisingly, considering how prevalent these cute little critters are.
It was a nice little hike to start our day with. Pappa Quail and the elder chika were very happy with all the birds they've seen and I was content with everything else as well. The younger chika didn't feel all that appreciative of it. She cheered up after learning that not much later we would be going to the beach at Border Field State Park, right by the Mexican border. We were very close already - we could see the city of Tijuana right there on the hills south of Dairy Mart Pond.