Thanksgiving Day of 2018 dawned on us in Descanso, CA, a tiny farming community nestled in the hills between San Diego and the Anza Borrego Desert. We arrived there the night before after a very nice birding day at the Tijuana River Estuary and the Border Field State Park. Throughout that day I have checked n the weather and was glad t see that the rains have finally arrived the California shores and were making their way south, one by one snuffing out the deadly fires that raged throughout our drought weary State. On Thanksgiving morning we found that the long awaited for winter had caught up with us - certainly a big one to give thanks for. It was heavily overcast, the wind was whipping the trees, and light rain drizzled off and on. We saw deer through the window, and the small community had their Christmas lights on already. Every establishment within a reasonable driving distance was closed for Thanksgiving and the only choices we had were to stay all day in the warm yet very small cabin we had rented without much to do, or to stick with our original plan, brave the weather, and go hiking.
Given these choices, we had a good, hearty breakfast, and left for Cuyamaca Rancho State Park where we had planned to hike that day.
The park is fairly big but doesn't have a very extensive trail system. The visitor center was too closed for the holiday, so we drove right up to the lake where we found a privately run recreation area that was open for business. We went inside to pay for parking and look for additional rain gear, and to ask about the best hiking trails in the area.
"You came at the wrong time of year," said the attendant. It was the first rain they've had in 11 months and they were very grateful for it, she told me. But it really wasn't the best weather to hike in, the vegetation was mostly dry and nothing was booming, and the lake has been the lowest it's ever been. She advised us to just walk the trail along the lake shore and to the island. "There might be some birds there," she said.
Having no plan B and not fearing the weather we decided to follow the attendant's advice and walk along the lake.

Already from the parking lot we could see that the shallow lake water was nicely populated with waterfowl. The usuals - Canada geese, mallards and coots were swimming to and fro in the water, not displaying any enthusiastic activity of any kind. They too seemed a bit under the weather.
Pappa Quail and the elder chika lingered at the trailhead for some time, trying to document every bird they've seen. Meanwhile I prepared a backpack with snacks and water, and distributed the plastic ponchos we got at the lake's store to protector cameras.
The drizzle eased off a little and we started walking south along the lakeshore. The trail followed the contour of what was the original shoreline but now had tall, try grasses on either side. 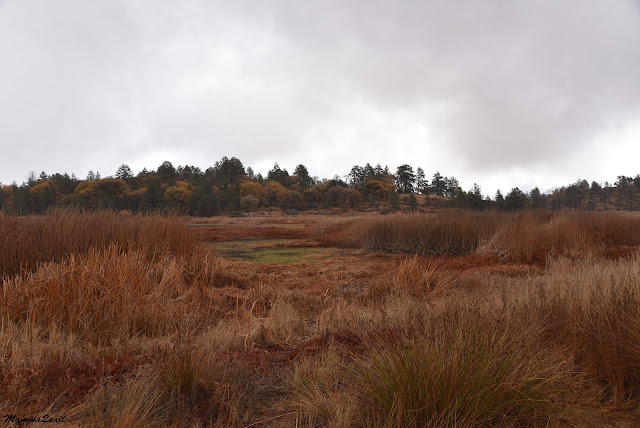 The actual waterline was far away, telling of the long drought years that have drained much of the lake. 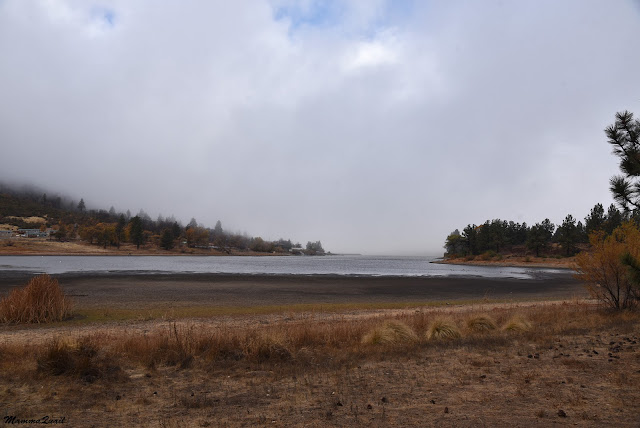 The dark, exposed mud appeared to be moving - there were many waterfowl and shorebirds moving n the mud in a slow and listless search for something to eat. A great but heron, all huddled in its feathers, gazed silently upon the mud flats.
Dark clouds were rolling in. As we turned the curve around the lake I could see to the south a big gray wall of cloud hovering over a flat field of red vegetation which I had not identified.
We were walking north now and the trail moved further from the lakeshore and the flats. I found that the attendant at the store wasn't completely correct when she said that nothing was blooming because I did spot there some blooming plants.
At lease two species of buckwheat were blooming at Lake Cuyamaka on the 2018 Thanksgiving Day. Not big and impressive carpets, but bloom nonetheless.
One can always count on the composite family to be represented in bloom year-round. That was true enough
The trees seemed to be bearing a different kind of bloom ...
On the east shore the trail was running along a wooded area, some of which had been burned. Although recovered since, there were still many charred logs lying around. Much of the undergrowth was low or clear altogether, thus visibility between the trees was good, and so were the opportunities for bird-watching.
It was nice to see fall colors along our hike. With the whipping wind I knew the yellow and rusty leaves would not cling much longer to the deciduous branches. I was glad that we were there at the right time to see the leaf-turn.
As I admired the fall colors I thought about what the store attendant had said. Perhaps we weren't there at the best time of year but this time of year was really beautiful there. 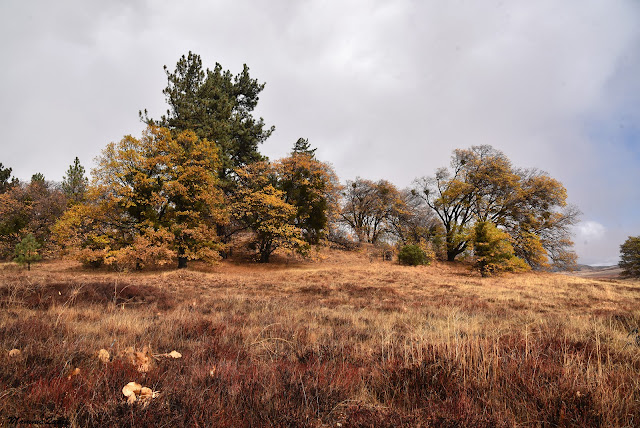 As far as birds were considered, we were there at a very good time of the year. They were everywhere. Unlike the lethargic waterfowl on the lake, the forest and bush birds were very active and were chirping all around us.
We reached a picnic area that had seen better days and a trail intersections with a split leading to the island. The island might have been such had the lake been full but with the current low levels the island was surrounded by a sea f grasses, not water.
We crossed the bridge over dry land and started walking around the island clockwise.
Fall colors made up for anything lacking in bloom. It was nice that while on the island the rain stopped for a while and we could fold our ponchos and avoid the whooshing of the plastic.
The wind kept on whipping though. We picked up the pace to keep warm.
The island is a hill rising above the lake. The trail didn't go all around at the lake level but climbed up nearly to the summit of that hill. From there we had a very nice view t the north west where we could see much darker clouds moving in. 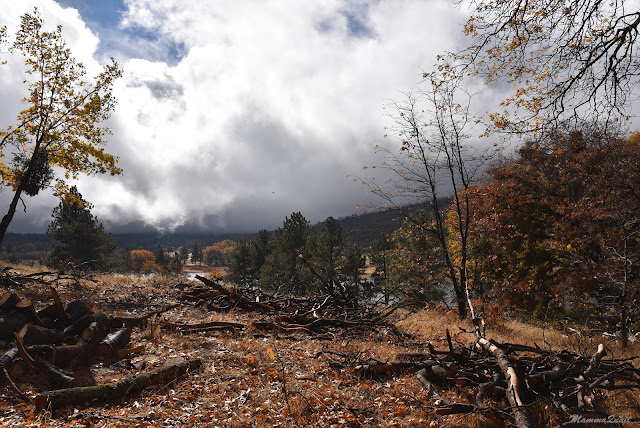 It was a matter of time until those ominous-looking rain clouds arrive. Meanwhile, we enjoyed a surprising spell of sunshine. We had a short snack break and the chikas went about exploring a little, and returned with a wasp's paper comb.
Turning round about the island got a nice view of the area where the northeastern part of the lake would have been if not for the prolonged drought. The lake's dry bottom was covered with a mat of bright red vegetation. 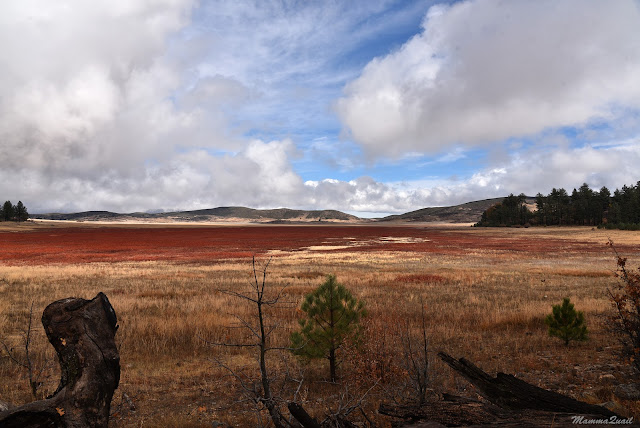 Far away in the distance a couple of harriers patrolled the field, to far to get a decent photo, even with Pappa Quail's powerful zoom.
The kestrel however, was closer and circled near us several times, giving Pappa Quail ample opportunity to take good photos.
We completed our circle around the island and crossed the bridge back to the other side. The weather had improved and we decided to explore a little the area east of the lakeshore. There were many 'social' trails there and not sure which was the official one, we simply chose one of them that was going roughly in the direction we wanted and followed it.
Our choice brought us to a very nice view point to the southeast where we looked at a pretty valley and a double-peaked butted. The map had these within the park's boundaries but not one of us suggested going there. Perhaps on a different visit. 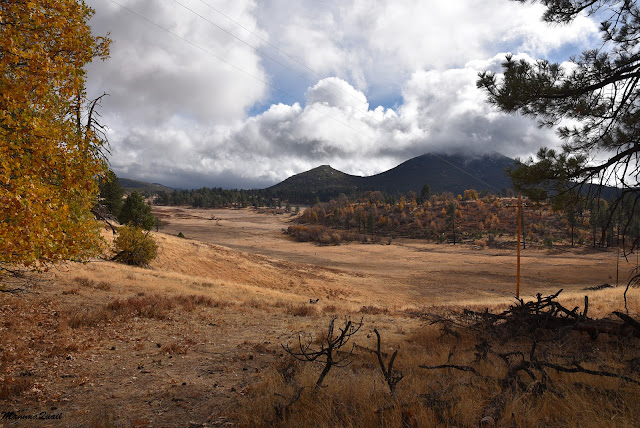 Woodpeckers became very active now that the sun was out. They use the brief respite in the rain to get about maintaining their larders.
Other birds came out of their hiding places and moved about their business in the forest, enjoying the  calm before the next storm.
Always on their guard and not just on Thanksgiving Day, were the wild turkeys. Deer too roamed the dry savannah of the valley below. 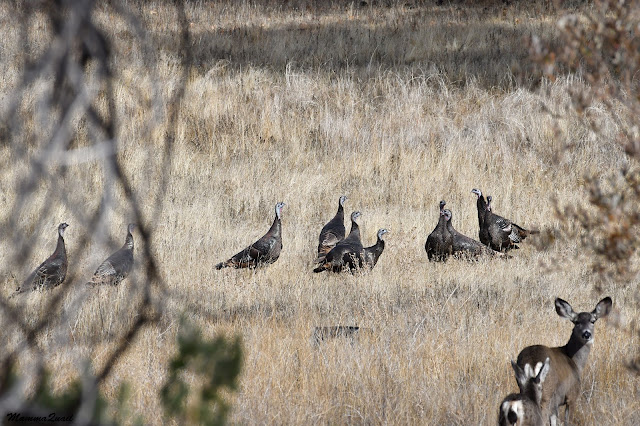 It was a little higher on that eastern hill where we came upon a burnt tree stump that had collected some rain water in a shallow depression . There, in that fleeting puddle, a group of western bluebirds were having the time of their lives. They were drinking and bathing and frolicking with each other. It was a beautiful sight to see and we stayed there for quite some time to look at those pretty little birds enjoying what the first rain had left behind.
Eventually we continued our hiking. It was in good time too because the sun soon disappeared being the new clouds that rolled in from the west. The wind picked up and large drops of rain started falling down from the sky. 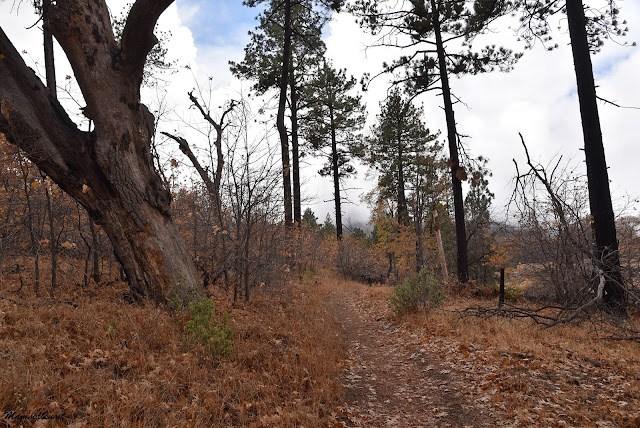 We hurried down the trail, once again wrapped in our ponchos, the plastic whipping at our bodies.
the newly arrived clouds were higher in the sky so on our way back we got to see that butte to the south that was completely obscured by the earlier clouds. 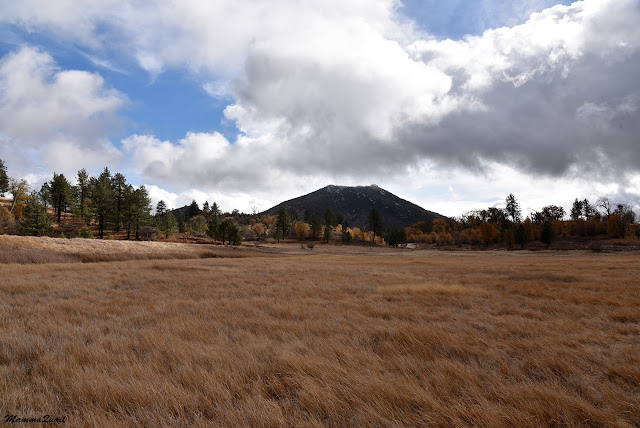 The sun struggled for a little bit, illuminating he dry grass and tule with soft golden color, but the heavy cloud was already siting over the small community by the lake and the wind was driving the rain drops to our faces even as we were walking in the sunlit field. 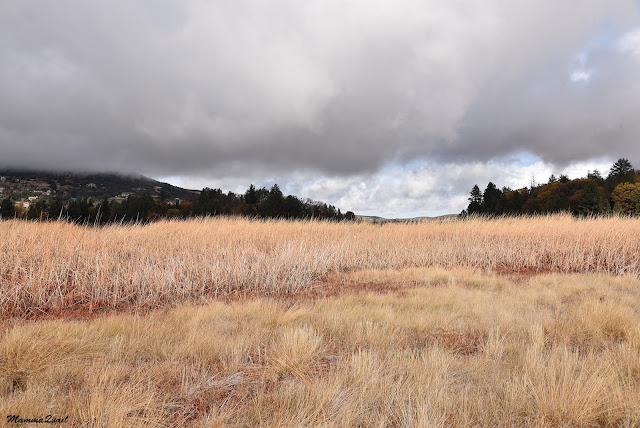 The right wasn't yet strong but the cameras were tucked under the plastic ponchos and taken out for only a few, worthy shots.
By the time we arrived back at the parking area the rain ad begun in earnest. We had a quick goodbye look at the lake and rolled out of the parking lot and straight into the recreation store. There Pappa Quail and the chikas sat down for lunch while I engaged the attendant in another chat. She was very pleased to know that we enjoyed our hike despite (or maybe because of) the weather, and that there was much to see even if we weren't visiting at the best season.

After lunch the light rain had turned into a full-blown storm. It was clear that we won't get another hike that day but it was still fairly early to we drove a bit north and enjoyed the rest of that afternoon in the quaint little town of Julian and its pretty historical downtown before heading back for another evening by the iron stove at the cabin in Descanso.