Taking it Easy: Up and Down Coyote Creek at Henry W. Coe State Park

The promised rain arrived at night. At the times I woke up I heard it tapping on our tent and saw in the faint nightlight the little trails that it formed on the rainfly. I like the calming sound of gentle rain, and I was soon lulled back to sleep.
In the morning it seemed that most of the system was already over. It was still overcast and the sky very gray, and the heavy smell of freshly wet soil and vegetation stood in the windless air. It was a cool morning and I quickly started working on the morning coffee and tea.
One by one our little company exited the tents, stretching, ready to start the second day of our two families backpacking trip. (Here's a link to read about Day 1)
As the morning progressed the clouds started dissipating away, revealing patches of blue sky that increased with every passing minute. We all gathered by a convenient rock near the creek where we had our 'kitchen' and discussed today's plan over breakfast.
My original plan for backpacking Henry W Coe included a loop trail along the north fork of Coyote Creek. That plan had to be altered when we had to change our zone permit to Shafer Corral. A loop through the south fork f the creek and the Blue Ridge would be too much for the kids, and very strenuous for the adults as well. The general thought was that after yesterday's strain we deserved an easy day of relaxation, so we decided to leave our tents where they were and go on an in-and-out day hike along the east fork of Coyote Creek.
As we were cleaning up after our breakfast and lazily getting ready for the day's hike the docent who sold us the wilderness permit yesterday came up the creek toward us. I got up and waved to her and she stopped to chat. She had come through The Narrows, she said, and motioned at her wet trousers and shoes. She didn't say anything about our tents being so close to the trail. She also didn't say anything about a tent that was pitched on a pebble bar right by the water against the wilderness camping rules. The couple who slept in that tent had not yet emerged.
The docent repeated some of the trail advice she had divulged when she issued me the permit. She had also shared her experiences of solo hiking and backpacking at Henry W Coe, which were extensive and very interesting. After that she moved on up the creek and we continued our preparations.
Taking only water and provisions for that day we left everything else inside the tents and started our hike. And the first thing we needed to do was to cross the creek.
Neither of us wished to start the hike with wet shoes so we walked up and down the shore a bit until we found a shallow enough spot where we could cross without water pouring into our shoes from above.
The trail went up on the high bank for a short distance, then descended back to the creek bed. We passed an encampment of a small youth group who ignored us. There we had to cross the creel again one more time.
Standing in the water were killdeer shorebirds who didn't care much about wetting their feet.
After fording the creek back and forth the trail finally settled on the west bank and we followed in parallel to it through theming and flat valley it carved between the mountain ridges in the direction of what was marked on the map as Arnold Horse Camp.
The creek was belted on both sides by wide strips of lush green vegetation that showed no signs of drying. I don't know if this creek runs year round but I do know (and not just from the vegetation lines) that it can and does run much higher and wider at ears of good rainfall.

Despite the apparent abundance of water this part of our hike down at the valley floor had much less bloom display than the mountain slopes we walked on yesterday. There were fewer species in bloom and of those, there were fewer plants all in all. It didn't seem like there was any recent grazing activity there but I wondered if that had anything to do with this place's prior function as a ranch grounds.
There also seemed to be fewer birds along this trail, but that may have been due to the funny late spring wet weather. The birds that we did see didn't yield easily to photographing. But Pappa Quail is a patient birder and we had lots of time on our hands.
Although the unofficial 'leader' of our little group, most of the hike I lingered in the back. The trail was straight forward and I took the time to enjoy the wildflowers that bloom along the trail and to simply breather and be-in the experience.


Although the day started with a promise of clearing weather big rain clouds did cross the sky above us every now and then. There was no major rain yet but occasional large drops would come down for brief period of time, prompting us to pull up the hoods and to cover the cameras.
Clouds and patches of blue sky kept exchanging overhead. Although we walked slowly and the trail was easy, questions started coming as to when will we turn and get back. According to the map about half a mile ahead the trail would cross the creek, then go uphill to the east. Looking at that hill I could see a building overlooking the creek. Henry W Coe State Park is composed of several former ranches that were donated or sold to the State of California but there are still a few private enclaves inside the park and that house was in one of them. The trail, which before the creek crossing would merge with the Blue Ridge dirt road, is likely the access route to that private enclave. I wonder how the relationship of the residents with the park works out.
The biggest cloud passed and once again we enjoyed warm sunshine. On the other hand, the wind was picking up to the sweaters and coats remained on. 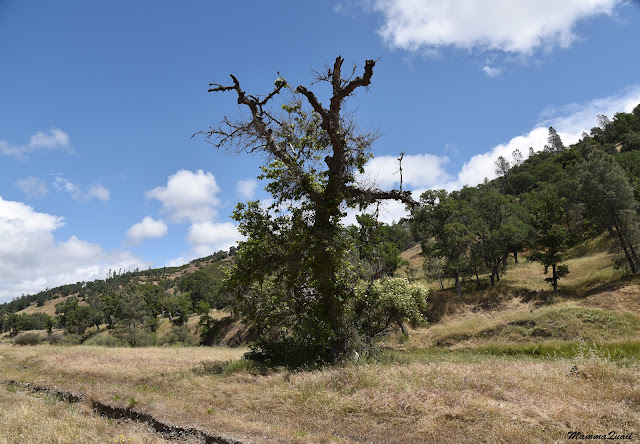 We never found the exact spot where the horse camp was, nor did we see any evidence of horses passing there, although I'm sure there's plenty of horses use in that area. perhaps the recent rains had washed all evidence of horse passage.
And I found a blooming penstemon!
Oak savannah on the slopes and riparian trees along the creek - there was plenty of habitat for birds and we could hear many come to activity as the weather improved. Still not cooperating much with the camera but Pappa Quail did get some photos.
By late morning we arrived at the creek crossing before the trail would go uphill to the private property area. There was no dry crossing there - fording the creek at that place would mean either going barefoot or soaking our shoes. Since we haven't yet reached a decision if to continue on or not, and since the creek bank at that place was so lovely and beautiful, and the sun was finally out and the sky blue, we decided to stop there fr a good break.
We all sat by the creek, skipping pebbles and chatting. I took my shoes off and cooled my feet. Then stretched down on my belly on the shore and in no time drifted off to sleep. 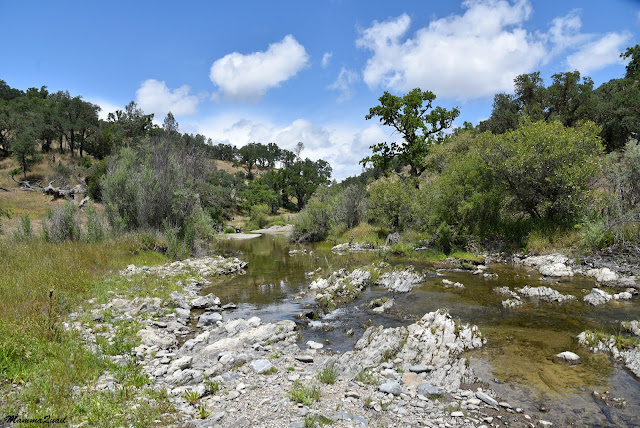 I think there was some talk about cooking lunch there at that spot, but when I stirred up from sleep it was because it got suddenly cold - the wind picked up and the clouds returned with a vengeance. By the few seconds out took everyone to put on shoes and get the day packs ready and covered, the rain started coming dow on us. Lunch would wait.
That pretty much made our decision to head back rather than cross the creek and continue. The kids were bummed about not having cooked lunch and I promised that as soon as the weather cleared enough, we'll stop and cook. The opportunity came when we came back to a place where the creek was wide and very shallow. There was an island there, easily accessible with a single hop from the bank. The weather changed for the better and we cooked and ate as hearty a lunch as we could carry on this trip.
While I was cooking the kids did some exploration and found tadpoles to observe. Pappa Quail did his own exploration too. The swallows were as uncooperative as the rest of the birds that day, but he did get to document a violet-green swallow's behind as it flew away.
We finished our business on the island just in time before the clouds came back. Full-bellied and content, everyone was in much more more agreeable mood as we hopped back to the creek bank and continued south back to Shafer Corral where are camp was.


The rain returned almost as soon as we left our lunch island. Pappa Quail and me quickly tucked our cameras under or rain jackets, but I did got mine out for a few brief shots of interesting things on the way. Most of these photos didn't come out right - they were either unfocused or blotched with rain drops that got on the lens.


Pappa Quail did the same and on a momentary break in the rain he got this papa quail standing guard, probably watching over his covey in the brush.

We crossed and recrossed the creek, passing over the youth group we've seen in the morning. Apparently they didn't go anywhere that entire day. When we got back to Shafer Corral however, all the other campers that we've seen there last night were gone. We had the entire area to ourselves.
Not that we did much with the space. No later than our arrival at our campsite that the rain intensified, sending nearly all of us into the tends. Nearly, because I did stay outside, sitting on the pebbles by the creek all wrapped in my rain jacket, listening to the tapping of the rain and the squeals of joy coming from the tents where the kids were engaged in some sort of a game.
The rain paused before sunset and we had a nice dinner and a relaxed evening before the rain resumed again and sending all of us into the tents for the night.

We didn't walk much this day, and the intermittent rain had a quelling effect on our activities and on our general mood. Still, we had a very enjoyable time together, and is was a well deserved relaxation after the strenuous hike of yesterday and the expected strenuous hike of the morrow.