Last Thanksgiving break was a split deal for us. On the first three days the chikas were out of school but Pappa Quail was still at work. Those days we were in the Redding and Shasta Area where we explored Pluto's Cave and hiked at the Turtle Bay Nature Area.
When Pappa Quail got his holiday we traveled again to Northern California, but this time along the coast.
It's a long drive to Redwood National Park but there are a number of beautiful redwood groves along the way. We stopped at the Lady Bird Johnson Grove where we had a very nice first hike for this trip.

A narrow and winding road leads up to the grove. The parking lot is tiny,and it was nearly full when we arrived there. We were fortunate to find the very last parking slot.
It was surprisingly chilly outside, despite the sunshine. Expecting the forest's shade, we dressed in layers and crossed the foot bridge where the trailhead was.
Indeed, as soon as we crossed the foot bridge into the grove we were in the forest's shade. The sunlight rays filtered through the canopies forming dancing light spots on the trail but for the most part, we were well under the cover of vegetation. 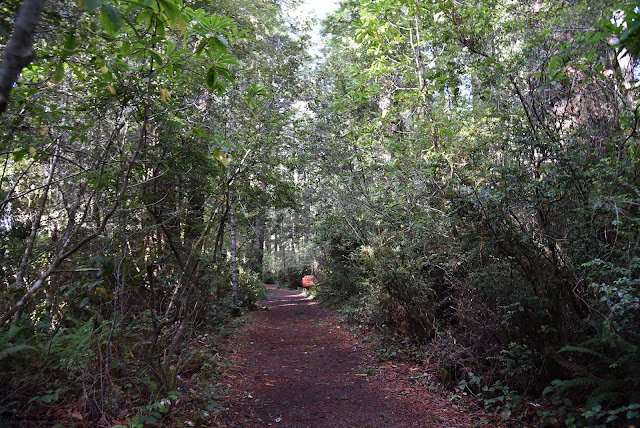 Trying to see the redwood canopies is always a neck-straining ordeal. It is hard to appreciate how high these trees really are.
It was easier to focus on the base of these giants' trunks which too are quite impressive. Good ones for a communal hug.
The North California coast is one of our top destination choices for Thanksgiving time much because it is the mushroom bloom season. The fall of 2019 was very dry however, and the mushroom bloom was very limited compared with previous years we've been there. I didn't expect to see many mushrooms and indeed there weren't many. But there were a few and I was happy to see them. 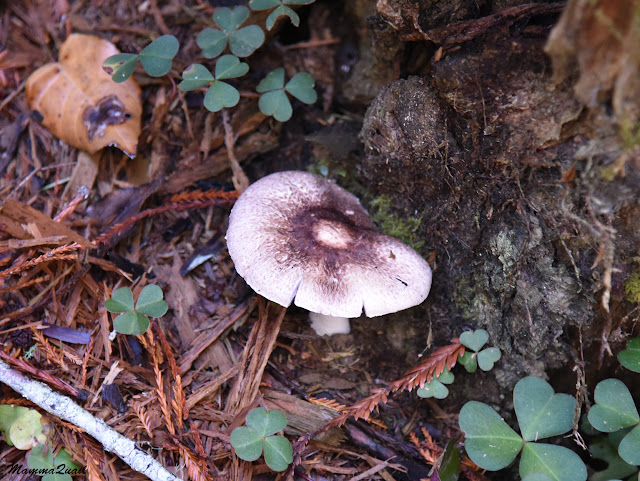 Some were harder to photograph than others - they hid in the dark deep underneath the shrubs.
What was happening outside and over the shrubs was no less interesting and perhaps even more fascinating: old decomposing logs of fallen redwoods supporting new life as planters for other plants. In this case - California huckleberry, one of the common epiphytic plants growing on redwood pedestals.
After about a third of a mile we reached the main loop trail within the grove. There stood a plaque with the grove's dedication by former president Richard Nixon to Lady Bird Johnson, the former first lady of president Lindon Johnson. 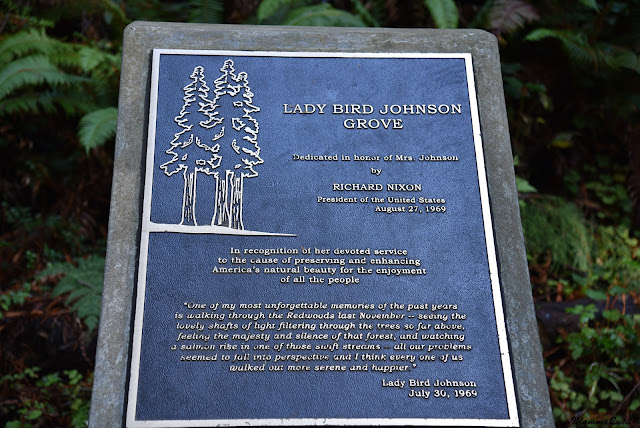 There were plenty of real birds in the grove but they were difficult to see and a challenge to photograph among all that vegetation. Pappa Quail scored one hermit thrush that landed on the trail and remained exposed there long enough for a few shots.
In general it wasn't easy to take good photos on that hike. Illumination is always a challenge in the deep forest, especially when the canopies allow enough light through to confuse the camera.
It was a feast to the eyes, however. 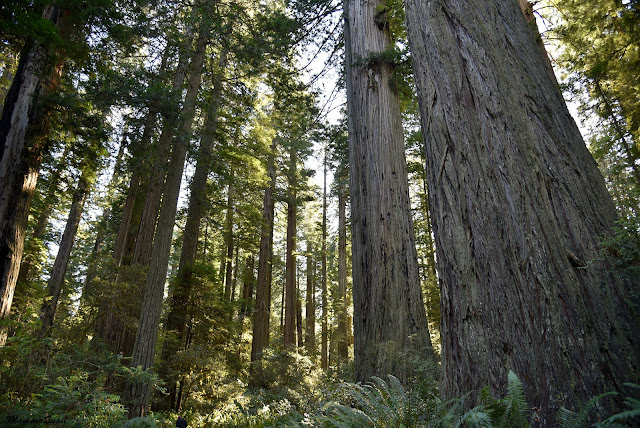 There were also many other epiphytes (plants that grow on other plants) beside the huckleberry. Another common one was the bracken fern. 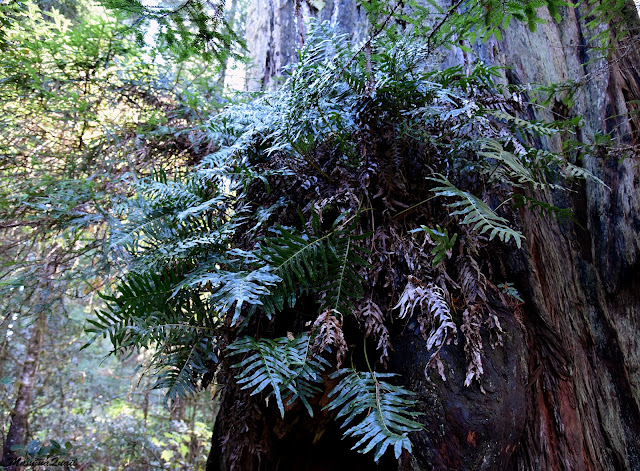 All these epiphytes begin small: I could see on the fallen logs at my eye level the small epiphytic gardens that given time would be dominated by one or a few bigger plants. 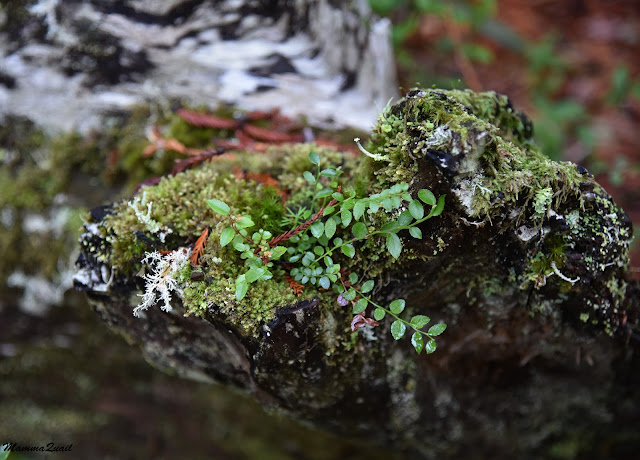 The day warmed up as we made our way around the loop trail. The elder chika was miffed about not seeing birds and the younger one whom I set to look for banana slugs for me was running that she couldn't see any. I let them follow Pappa Quail ahead while I remained lagging behind to walk in the peace of the forest. 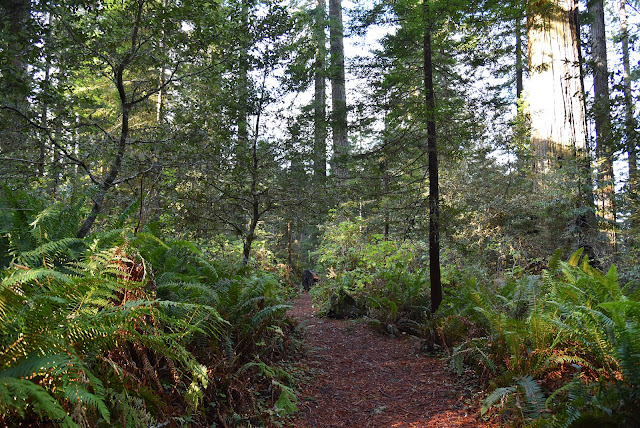 We found a hollow redwood, which had a good effect on the chikas. They paused their bickering long enough to pose inside the tree for some photographs. Then I too went into the hole.
These holes are caused by fires, often ignited by lightning. The redwood is more fire-resistant than other trees due to its high content of tannic acid, the same chemical that gives it its red color. High tannins concentration also render the redwoods more resistant to pests. Too bad it doesn't make it resistant to human saws.
Another redwood tree had a huckleberry bush growing right out of its trunk. Perhaps it sprouted there and grew as an epiphyte. Perhaps it sprouted on the ground next to the redwood and the tree engulfed it with its ever growing bark.Either way, both plants seem content and healthy with this setting.
The chikas called me to hurry up and join them - they had spotted another mushroom for me to see. I think I had trained them well. 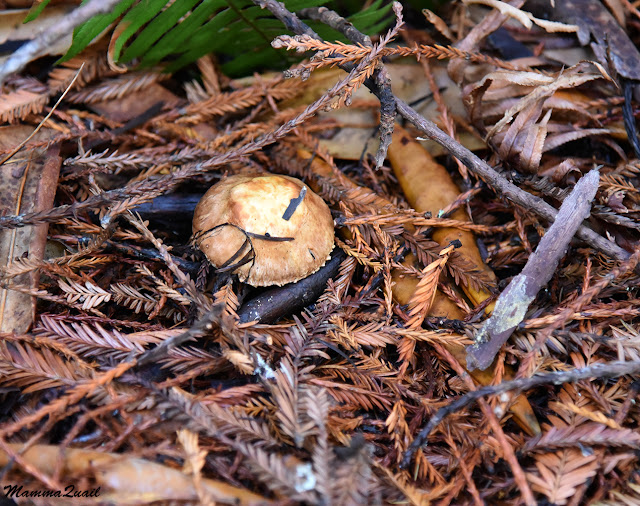 It is really hard to get an impression of the size of an old growth redwood tree from photos. But I never cease to be impressed by these wonderful giants.
We completed the loop trail and turned back toward where the parking lot was. The day had warmed u but the wind intensified as well, and we could see the canopies moving way up above. Despite the sunshine, we remained bundled up in our winter wear.
A weird looking tree caught my attention as we were getting near the end of our hike. It was the biggest epiphyte huckleberry I've seen that day.
I wonder how this tree planter will look like in a few decades. Perhaps I'll even be there to see for myself.