Last Thanksgiving week the chikas' schools were out for the entire week. Pappa Quail however, was still working until Thanksgiving Day, so I took the chikas and their friend for a three-days trip to the Shasta area for some exploration and fun. During the first days there we had visited the Shasta Dam and explored Pluto's Cave. On the last day, before heading back home, we went to the famous Turtle Bay Exploration Park. After visiting the museum and the animals area we went over the Sundial Bridge across the Sacramento River for a hike in the little river preserve and the McConnell Arboretum & Gardens.
The days we spend in the Shasta area were also when the first winter storm had stormed through Northern California, bringing well needed rains but also dumping lots of snow even on lower elevations that do not often get snow.
When we were at Turtle Bay the main storm was already over but it was still overcast with heavy clouds, and it was still cold with an occasional rain shower.
The sky looked very dramatic indeed and all of us bundled well for the hike.
There were a few people out and about. I assume that on warmer days the place there are more people there but on that day we had the bridge almost entirely to ourselves.
I stopped in the middle of the bridge and looked at the Sacramento River. The river was full and flowing high and fast. It certainly wasn't a day to go swimming in the river.

At Turtle Bay the Sacramento River has a coupler of wide curves so at the place of the Sundial Bridge the river flows from west to east rather than north to south as is most of its path. A mountain loomed over the western river bend. The kids wondered if that might be Mt. Shasta but the proximity to Redding and moreover - the wrong direction, ruled that right out. But I couldn't tell them then what was that mountain.
Needless to say, without the sunlight, the sundial function of the bridge's tower was of very little use for telling time. We did enjoy going under it and around it and posing for some photos with it in the background.
Satisfied with the close up view of the Sundial Bridge tower we took off eastward on the Sacramento River Trail. Large valley oaks loomed over the trail, adding whatever shade left of their fall-dwindled canopies to that of the rain clouds.
The trail near the river attracted joggers, dog walkers, and fellow hikers. Once we turned north to follow the loop there were fewer people along the trail.
To the east rose a low hill with houses at the top. To the west spread a flat oak savannah that before the building of the Shasta Dam, as we learned on or visit there two days before, used to be seasonal flood plains that became submerged whenever the river got engorged by the winter storms or fast snow-melt events.
The mountain we've seen from the bridge was visible over the trees, its summit hidden in the clouds. Once again the kids asked about it, and once again I shrugged. I didn't know the name of that peak, but I did know it wasn't Mt. Shasta. 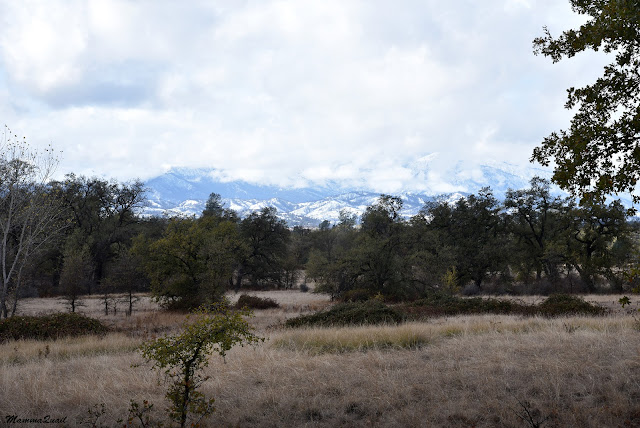 The trail was paved all the way through, making it an easy, fast walk for us. We kept going round the loop and, looking south, we could see the tilted Sundial Bridge tower poking through the oaks.
The sky looked dramatic but no rain came down. 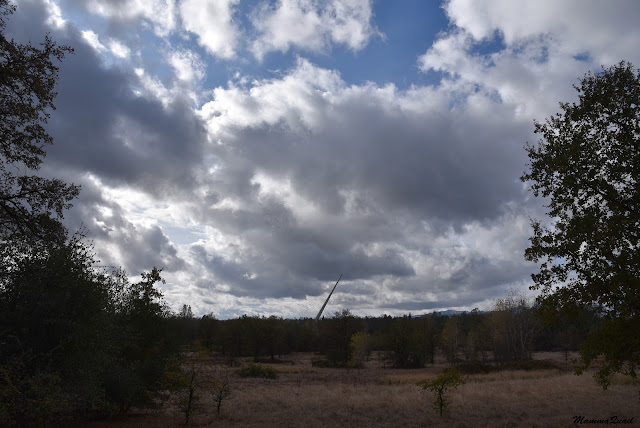 Suddenly - sunshine! The sun found its way through a hole in the clouds and gave us a brief warm moment. A moment to enjoy the scenery in its fall beauty.
There were no flowers to be seen anywhere. It was too late in fall and too early in winter fr that. All the grasses were dry and many of the undergrowth shrubs were bare. I thought some of them looked familiar and when I saw some bearing fruit I recognized them immediately - even without the 'leaves if three', these were poison oak.
And a good thing it was that I recognized it on time because my younger chika was just about to pick up a fallen twig from under one of these irritant bushes. I stopped her right as she was reaching for it.
We kept going around the prairie, now enjoying intermittent sunny patches. On a different season I might have taken more time to explore the area but there were no wildflowers and we saw no wildlife save for a few little bush birds. 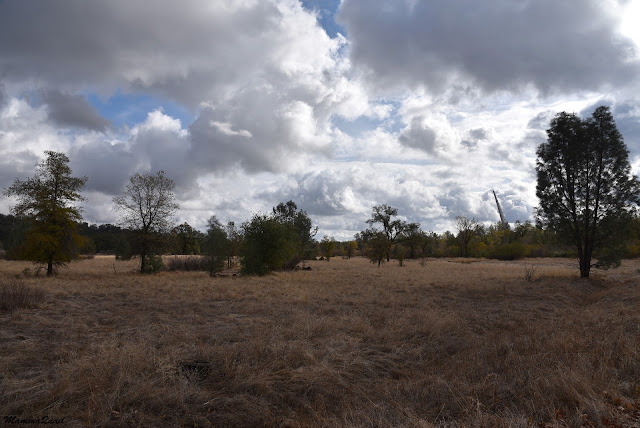 The western arch of the loop trail was lined with different bushes - cultivated roses, also in their fruit-bearing phase. I reached for the fruit, and they were soft and supple, so I picked some and ate them. The kids saw me and followed suit, making faces at the many seeds and hairy texture.
Under the rose bush, hidden from the weak sunshine, were the remains of yesterday's snow. Redding is too low and warm to get snow frequently, and although a good amount came down, very little of it remained by the afternoon of the following day. 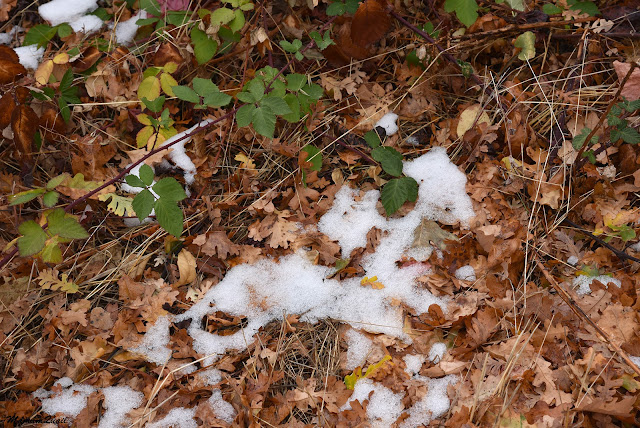 By the time we were completing the loop trail the sun hid behind the clouds again.
Knowing the kids I thought they would want to finish the hike right there but to my surprise they decided to go on and explore the McConnell Arboretum & Gardens. Needs to say, I was all for it.
Little redbud trees in fall colors welcomed us as we entered the arboretum.
I spotted a pretty monument in the shape of a crab's pincer, picturing many local animals down the trail, so we went down that path to get a closer look. 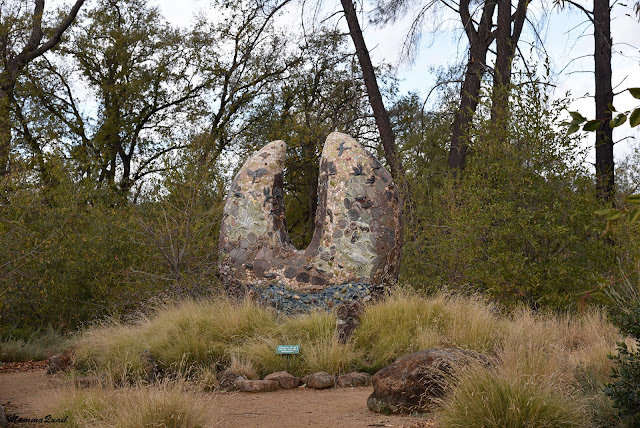 Near the monument I spotted the only plant that was blooming that day n the arboretum - a California fuchsia, low near the ground. It made me happy to see the flowers.
At the west end of the arboretum there is a small human-made island which is a mound of rocks and soil, still being planted and landscaped. It is the "Spider Island" and the bridge leading to it is decorated with metal spiders and is appropriately named, "Charlotte's Bridge". Not a place for arachnophobic people, I guess, but I found it amusing. We didn't see any real spiders there that day, however.
What we did find here (actually, it was my elder chika who found it), was a little tree frog hopping by the trail. I managed to get a ew shots before it vanished out of our sight.
We were circling the island and the afternoon sun graced us with another rare appearance, revealing the pretty fall colors of the bushes by the trail side. 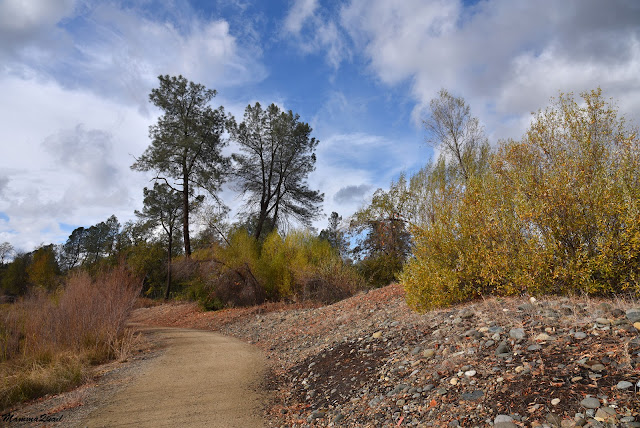 As we were rounding our loop around the island we were also going around a small pond full of ducks. These were mostly mallards, my elder chika informed me. 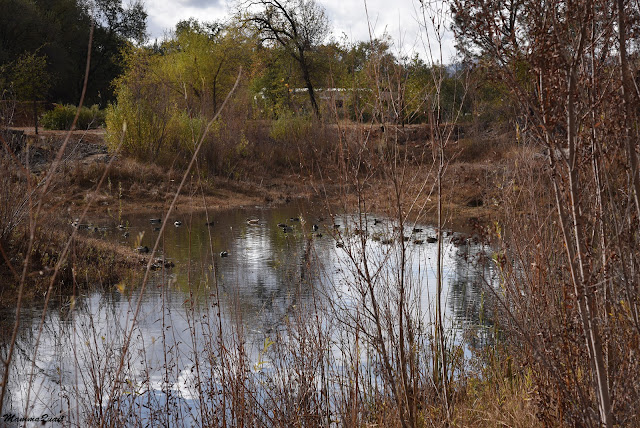 We came around the pond, enjoying a nice reflection o the fall-colored trees behind it. The arboretum's nursery was behind it too. Any other time I might have been tempted to go inside and look for plants to buy but this was not the time for it. 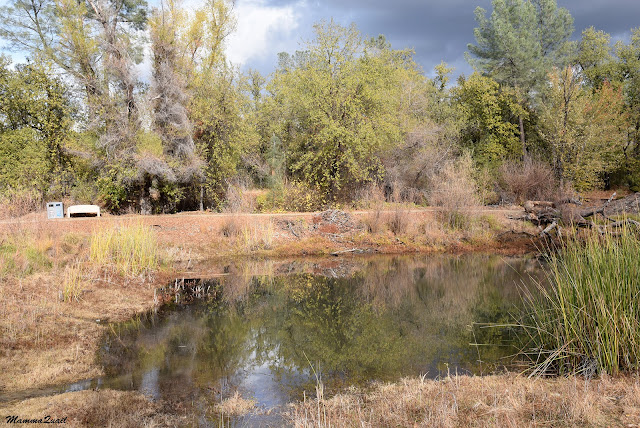 The clouds closed on us again, eliminating whatever little warmth the sun had blessed us with. Moreover - the afternoon wind picked up. We wrapped ourselves again, and hurried out of the arboretum. As we crossed the river again back to the Turtle Bay Exploration Park's parking lot I stopped once more in the middle of the Sundial Bridge and took a close up shot of the mountain to the west.
Today, as I am working on this blogpost, I took the time to post the mountain photo online and soon enough I had an answer for my query: this mountain is called Shasta Bally and it is part of the Whiskeytown National Recreation Area. I know now where I plan to hike next time I'm near Redding.

This nice hike was our last activity in the Shasta-Redding area. After a nice lunch in town, we took off on the long drive back to the Bay Area. The day after we would go out again, this time without the chika's friend but with Pappa Quail, once again to Northern California, but this time along the coast: to Redwood Country.