A Small Climb to a Huge View: Up Moro Rock

Date: August 16, 2019
Place: Sequoia National Park, Three Rivers, California
Coordinates: 36.546959, -118.765595
Length: 0.5 mile in and out
Level: strenuous
Following our casual stroll at the Generals Grove I brought my friends to the nearby Moro Rock to make the best use of the remaining daylight. It has been many years since I myself had been there and I didn't quite remember how many steps of a climb that was. I did remember that it wasn't long and that the view from the top was spectacular.
The first surprise was actually right there at the parking lot, in the shape of a very interesting fir tree.

In fact, I have seen this particular fir from the Generals Loop Trail. It had caught my attention because of its very unorthodox apex shape. A full zoom photo revealed that this tree's odd-looking top is due to branch reiteration that occurred after the tree lost its original apex. Reiteration is a repetition of the same structure as fractals, and in this case - the side branches developed in the shape of the missing tree apex, giving its canopy this unique look.

My friends were less interested in the botanical wonder, and the day was getting short so, without further delay we started up Moro Rock.

Moro Rock bulges out of the forested mountain side and so almost immediately the wonderful view opens up. 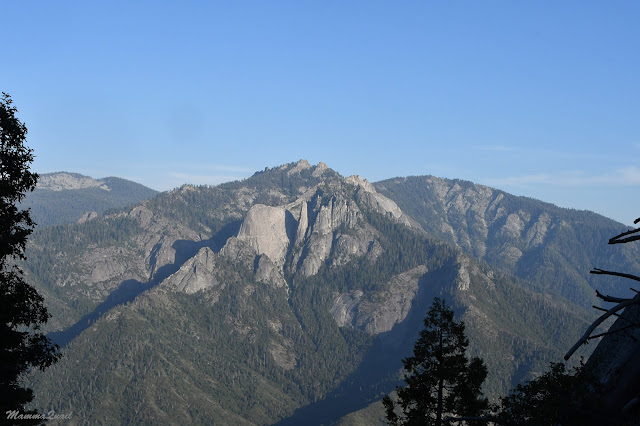 A narrow trail cut in the rock and augmented with cemented walls made to look like the original rock with slide slopes and many many stairs (400, according to the National Park web site), lead up and around the rock face. Turning the switchbacks I had a wonderful view to every direction. 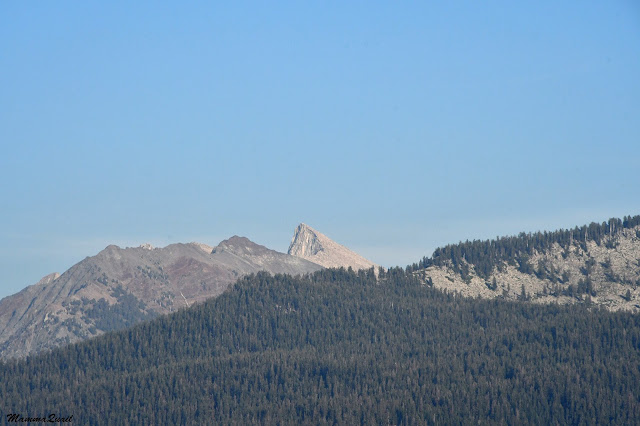 A turn to the southeast had opened up the view to the magnificent High Sierra skyline. My heart leaped inside my chest, I was longing so bad to be there. 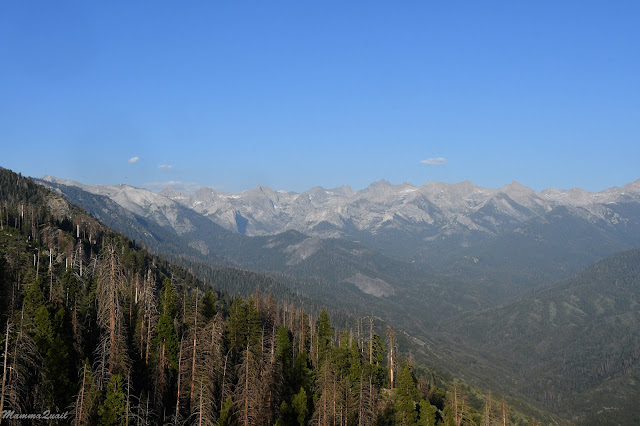 I turned my attention to the rock face itself. Moro Rock is a granite dome, but the garish granite was painted all over with lichen. 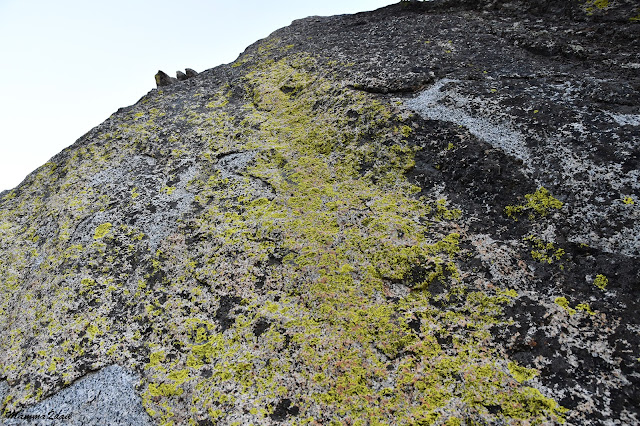 The trail is steep but not long at all. Looking up I could see the steep railed staircase. Visitors have been climbing Moro Rock since the 1800s but the stairs were put in place only in 1917, making it easier to reach the rock's summit. 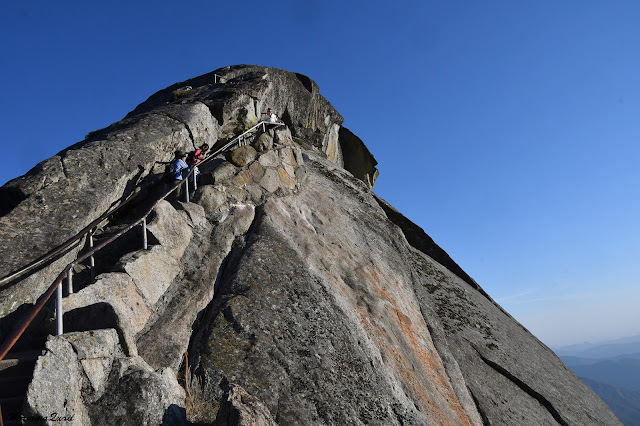 About mid-way up the trail I turned around to look at the forest below. I had just hiked in that forest but it is from above that I could see how sick and damage this forest really was. I estimated about 30% of the trees were dead, fallen victim to the combination of drought and the boring beetle. 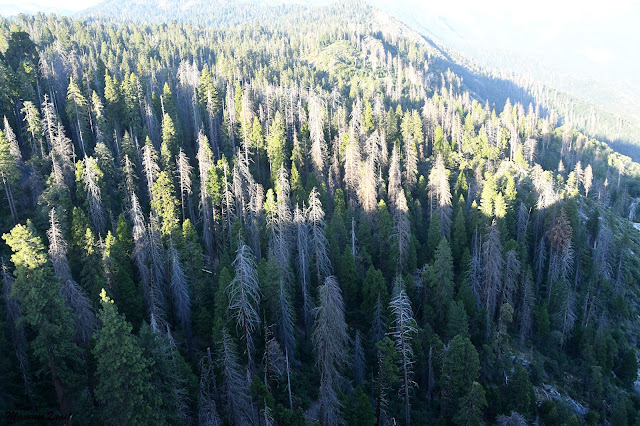 I turned my gaze to the area of the Generals Grove. It is really not difficult at all to pick out the giant sequoia in the canopy line. 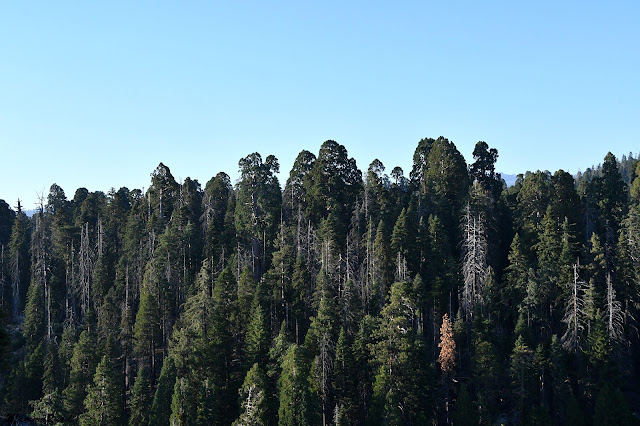 Turning around the rock again, and the southwest view opened before my eyes. The deep valley cut by the Kaweah River leading down to the San Joaquin Valley where until not that one ago it used to feed the now extinct Tulare Lake.
The air was murky with pollution. A sign post by an observation deck along the trail explained that this was pollution coming all the way from China, carried by east-bound winds. A satellite image of the pollution cloud was shown to support the claim. 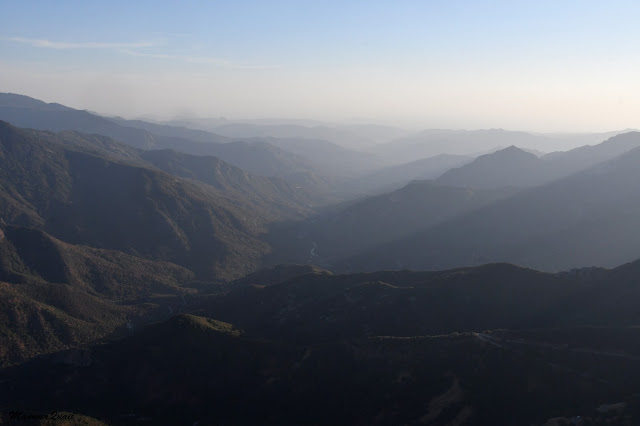 From the observation deck I could glimpse the summit. My friends had enough rest and I prompted them along to the top. 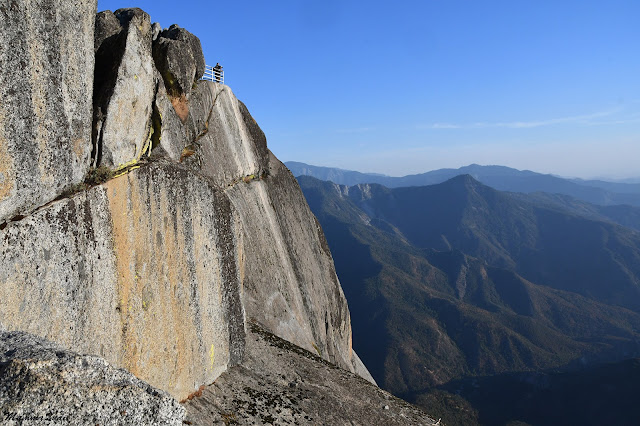 Near the summit the trail narrowed considerably. That east that every time someone came down the stairs we had to squeeze ourselves to the rock to allow them to pass. At one of the switchback corners I found a small tree that grew in a crack in the rock. Coming closer I was much surprised to identify this tree as a California laurel! I had to actually tear a leaf and smell it to confirm the identification. Such an unusual location for that species.
The final flight of stairs, orange with the setting sun, and we had to wait for a couple of families to make their way down before we could squeeze our way up to the summit. 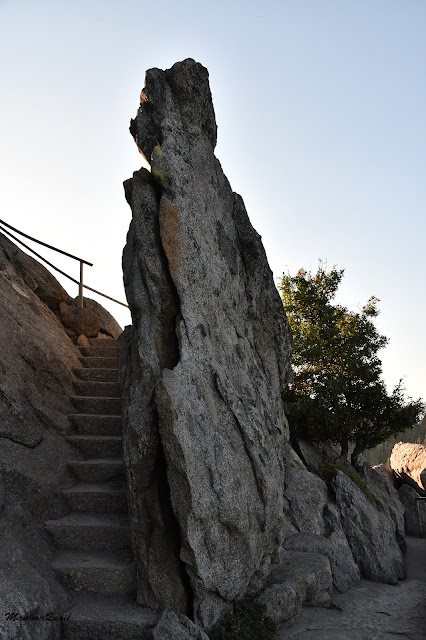 The day was coming to its end. We stood at the summit of Moro Rock and enjoyed the peaceful scenery all around us. The wind picked up and I wrapped my arms around my body in the sudden chill. I could no longer look to the west because the setting sun was shining directly into my eyes and the Kaweah Valley was obliterated by the evening glare. I averted my eyes and enjoyed the northwestern view instead. 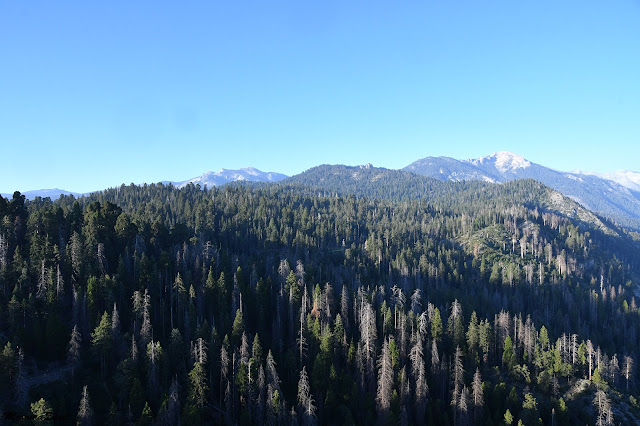 The sky above us was very busy with swallows flying fast and displaying intense aerobatics. Photographing them with the camera I had was futile but I tried nonetheless. 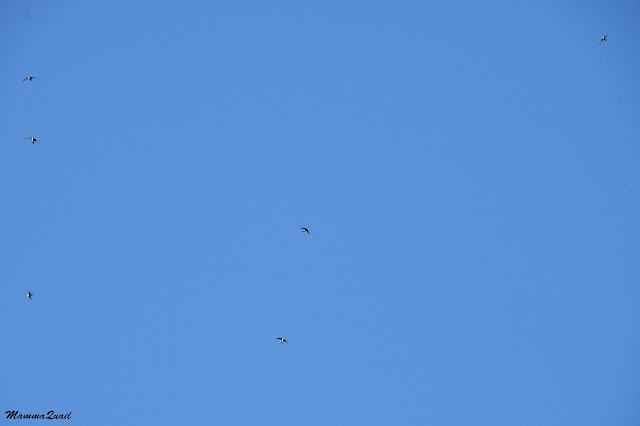 We were no longer alone at the summit. A small group of young visitors came up the flight of stairs. We had seen them earlier at the Generals Grove. Apparently one of my friends had already chatted with them and was happy to greet them again at the top of Moro Rock. They were tourists from Italy and they were having a lot of fun in California. I was glad to give them a few pointers on what there is more to see in the area.
We didn't stay longer at the summit. Saying goodbye to our Italian friends we started descending down the narrow path. Turning again to the west-facing slope I stopped to look at the rock face again. In that spot the rock decoration was not lichen but moss. The moss was lush and moist, indicating a great deal of dew or fog condensing on the west-facing granite. 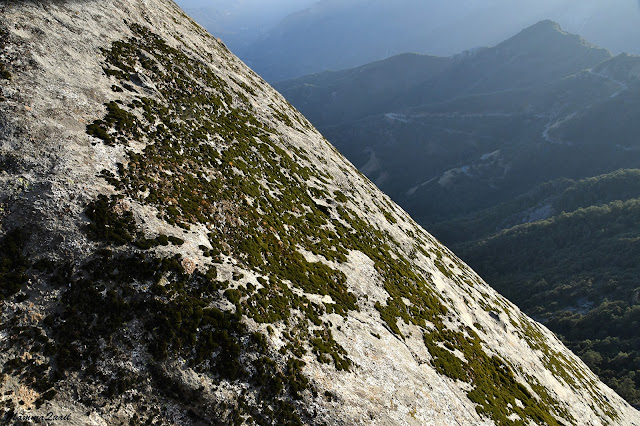 Somehow looking down seemed scarier than the view up ... 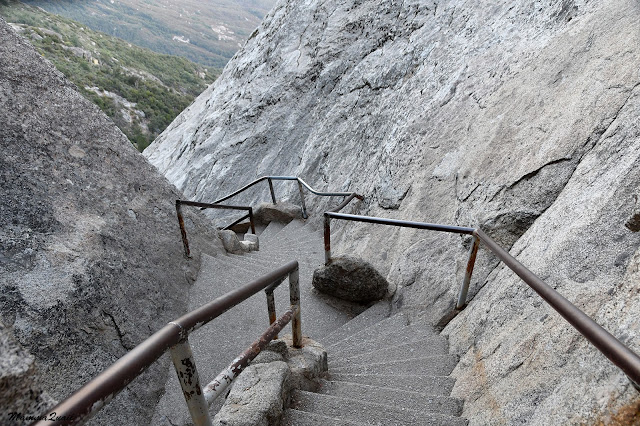 The sun sunk below the horizon while we descended from Moro Rock, and the last evening rays were painting the tree tops gold. 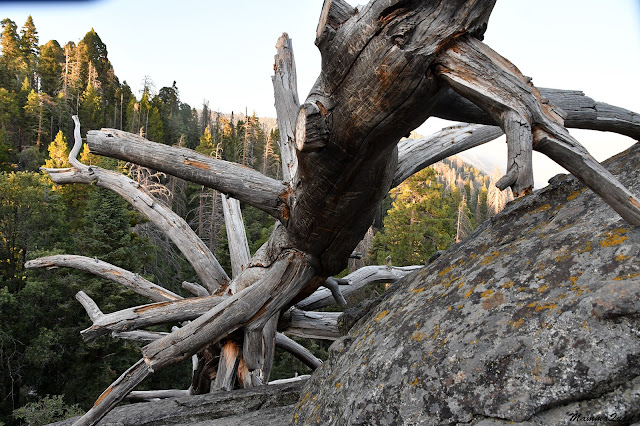 Silently we came down the last few stairs. As we made our way to my car, now almost alone in the parking lot, a new car came speeding down the road, stopped and a noisy family spilled out of it, brushing against us as they sped up the trail, attempting to catch the last day light ay the summit. The sunset they had already missed.
A bit shocked by the sudden burst of someone else's energy we got in the car and drove off in silence to our campground down at the Kaweah Reservoir.
Posted by Mamma Quail at 11:36 PM