In my opinion the giant sequoias are a must see to anyone visiting California. These extraordinary trees grow only in California in a few groves on the western slopes of the Sierra Nevada mountain range. It was no surprise then that when we get visitors from overseas we do our best to work into their schedule a trip to see the big trees. On August 2019 I took a couple of friends on a two-weeks road trip 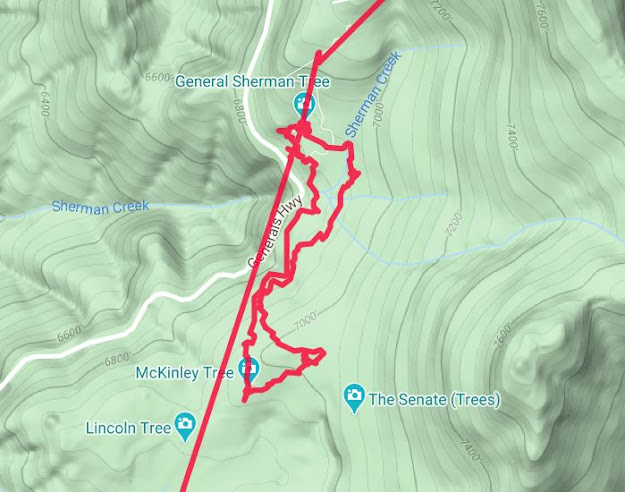 It was a busy summer and when we arrived to the General Sherman parking area we found it full. Every parking area within walking distance was also full. We were lucky to find a spot at the Wolverton Picnic Area and take the shuttle from there to the Generals Highway at the point closest to General Sherman, the individual giant sequoia that's the largest tree in the world. It was a couple of minutes walk to General Sherman, which we found surrounded by many park visitors. I couldn't get a people-free photo of this amazing tree. Not that it's an easy thing to fit it into a single frame even with no people present. Giant Sequoia are really difficult to capture in perspective.

My friends started circling around General Sherman along with the crowds. After telling to them what they aught to know about giant sequoia I let my attention drift from the big trees to the little beings closer to the ground. 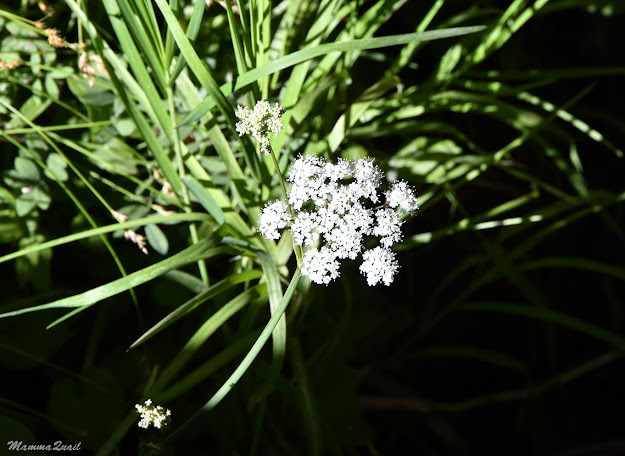 The ground user the sequoia trees was mostly bare of vegetation. There were patches of young conifers and a shrub here and there, but no significant cover of annuals, certainly no blooming carpets. Here and there however, I saw a blooming wildflower of one of the common conifer forest species. It was nice to see that there was still a touch of spring even later in summer.

Wetter spots, between large rocks or where a small creek trickled by the trail, showed more greenery and a bit more bloom.
After circling General Sherman and taking all the photos we could of the mighty giant we started on the Generals Trail, a short and easy loop through the grove of giant sequoia. 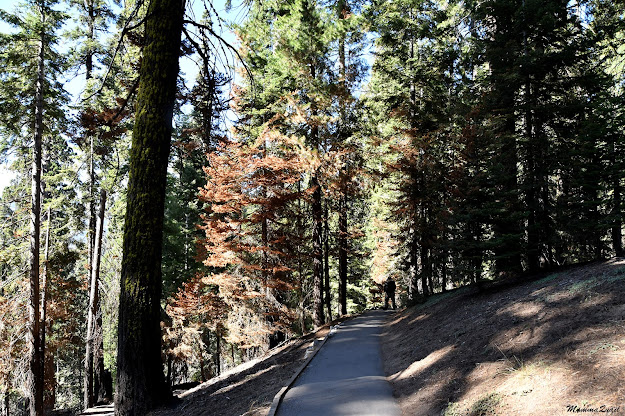 The scars of past fires were evident all around us. Old giant sequoia trees are more fire resistant than most trees, having a very thick bark packed wit tannins which are fire attenuators. Very much like their relative, the coast redwood, a quick moving forest fire leave these giants scarred but alive. 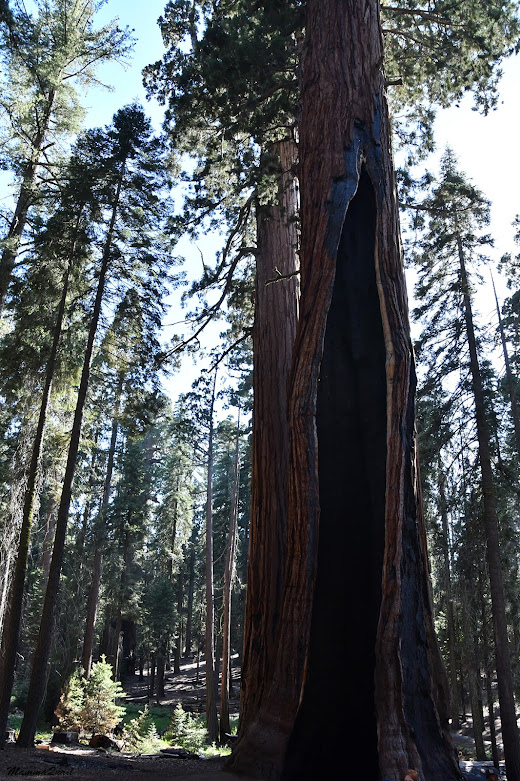 Intense blazes do kill even giant sequoia. Sadly, we have also encountered the charred remains of trees that succumbed to a fire more intense that even the mighty sequoia could withstand. 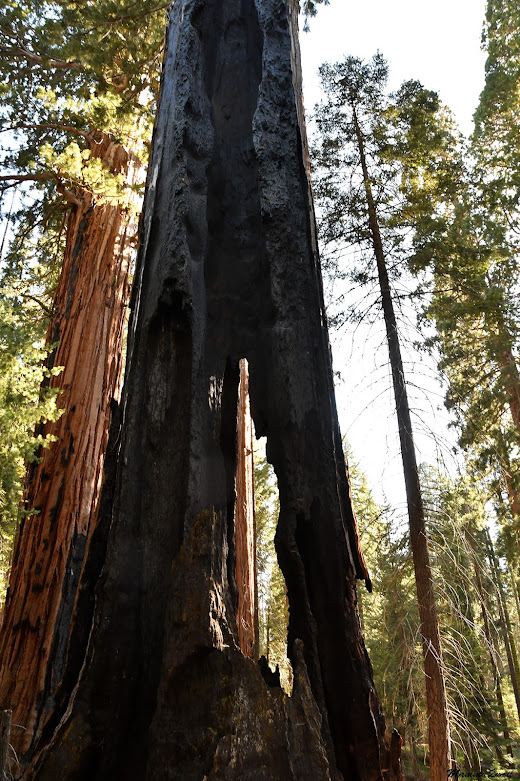 The giant trees were growing mostly well apart from each other but very little direct light was making it down the tall trunks all the way to the forest floor. There was very little undergrowh between the sequoia trees. I was therefore, surprised and pleased to see a cluster of what looked to me like sunflowers in a small depression off the trail. It was too far for me to get a clear shot but there were enough of them to make a beautiful colorful patch. 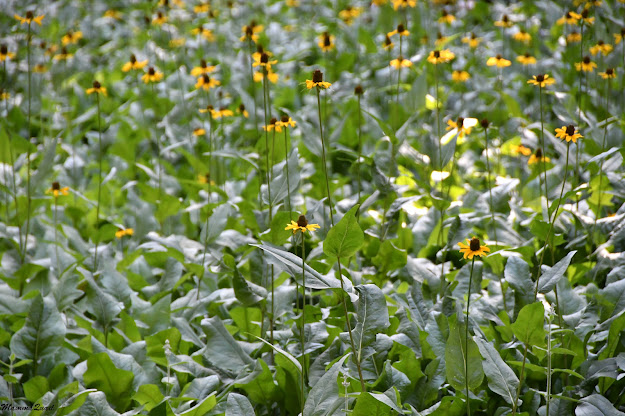 I wasn't about to give up on trying to fit an entire giant sequoia into a single frame. This is one way it can be done. 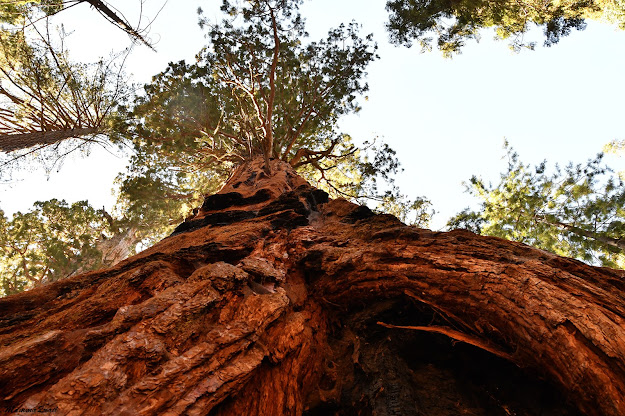 A smell of smoke stood in the air. It wasn't very strong but it was an indication that the most recent fire was in fact, quite recent. I remembered having smelled the ashes of a fire scar several months old in the Grand Grove area, so I thought that this fire could have been days to weeks ago. It was only when I saw actual smoke swirling from beneath a still smoldering charred pine log that I realized how recent this recent fire actually was. So recent that it wasn't completely out and cold. 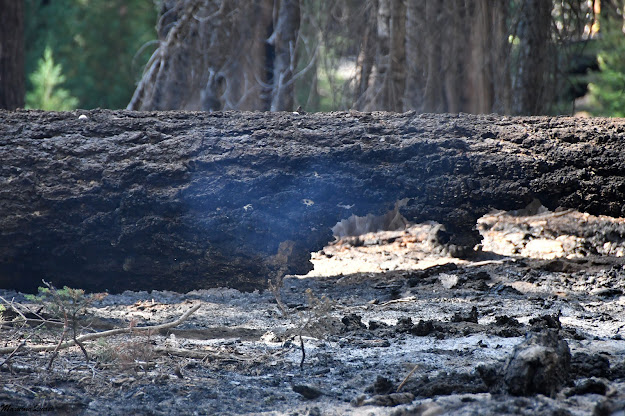 In the beginning of sequoia tourism the big trees were given names in honor of men of high status. In the Generals Grove, the trees are named after US military generals. Not very familiar with US military history, most names were unfamiliar to me. Some were, though, and one surprised me - one of the big trees was named after general Lee.
I cannot say I'm too hot about naming sequoia trees after people, but if so, I'm sure they could have had better choices. 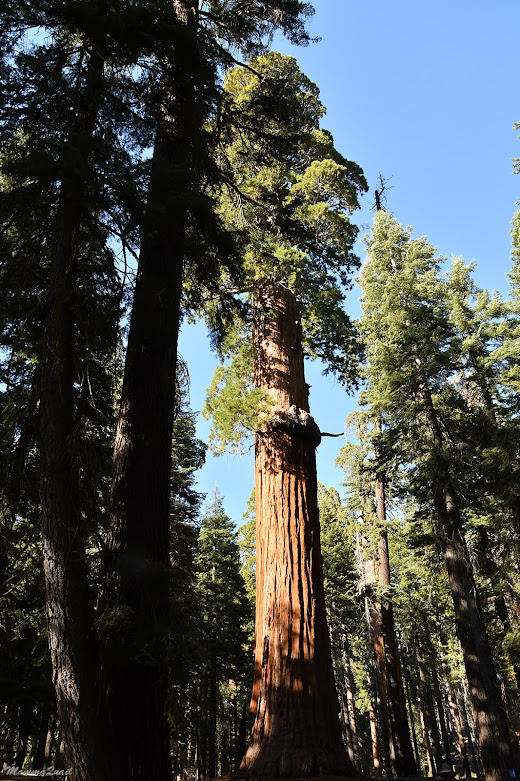 Did I mention that giant sequoia get really big? One wouldn't expect such giants to grow too close to each other, but it's not rare at all to see two or more giant trees growing very very close to one another. Knowing this species fuses roots underground it is probably possible to see them as a single unit even if they did sprout from separate seeds.
A past fire left this duo scarred enough to have a room for a person to walk between them, and so I did. I like to get a different perspective on things.
As big as these trees are, their root system is actually quite shallow. They would have collapsed more often if not for supporting each other by fusing roots underground. A connected root network also allows the sequoia to pass water, nutrients, and hormone signals between them.
The root crown might be small for the sequoia but it's certainly huge by any human standard. 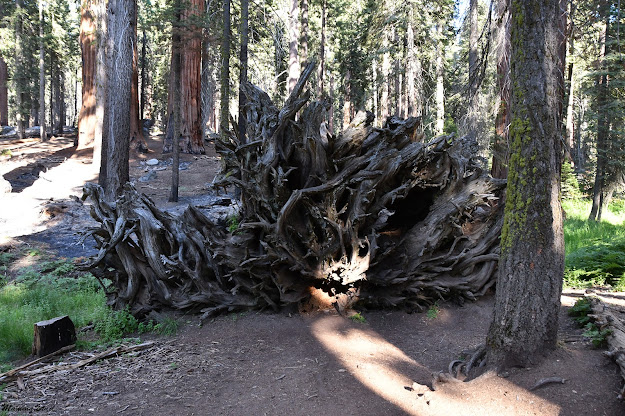 A big part of the generals Loop Trail is paved and accessible, making it an easy trail to stroll along and forget about the passing time and the lengthening shadows. We took our time meandering between the trees and occasionally stopping to chat with other park visitors. 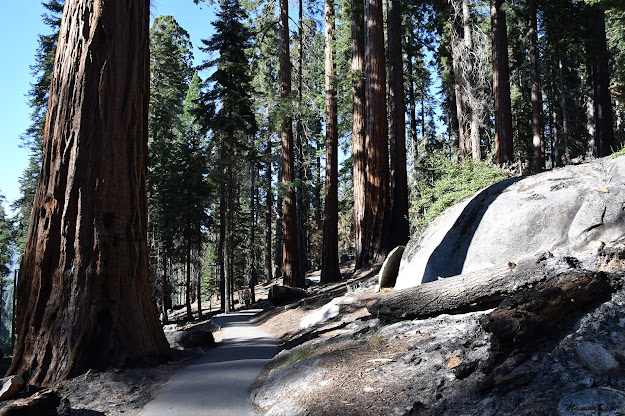 There were so few wildflowers in the thin forest undergrowth that I was very excited with any dot of color I happened to chance upon along the trail.
Of course there were other interesting sights in the Generals Grove, such as the long, beautiful cones of the sugar pine trees that grew alongside the giant sequoia.
As we curved around the big trees, making our way back to the General Sherman area we came upon a large, fallen sequoia log where a passage was cut through for visitors on foot. It was clear in this case that the 'tunnel' was cut after the tree fell but I couldn't help remembering all the big trees, both giant sequoia and coast redwood, that were cut int tunnels while alive and erect only to provide amusement for the visiting spectators. Most of the tune trees are no longer alive and erect - cutting the tunnels had compromised their stability and rendered them vulnerable to the elements, much more so than their intact neighbors. Around the curve we came upon a patch of baby sequoias and I broke into a big smile. This amazing species that had survived the Ice Age and had withstood intense challenges is still kicking new life. It's great to see the next sequoia generation coming up and I hope they'll get to be as big and old as the Generals. 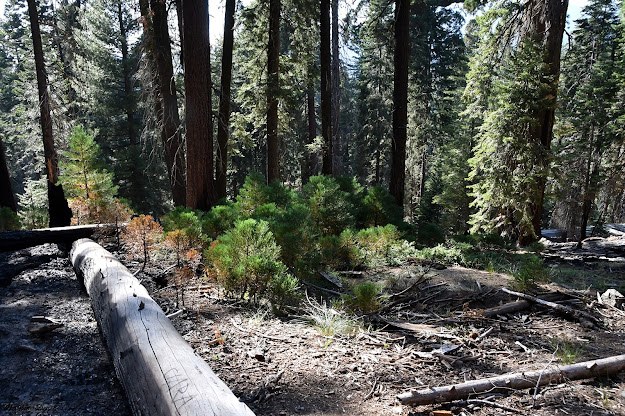 The baby sequoias as well as other young trees were growing in clearing areas where the big trees had fallen down, leaving holes in the forest canopy for the sunlight to stream though. Near the baby trees other shrubs took advantage of the more abundant sunlight.
We completed the Generals Loop. I waved goodbye to General Sherman and led my friends back to the shuttle stop. While waiting for the shuttle I amused myself by checking out some of the local herbaceous plants that were blooming in the sunny patch near the road. As it turned out, this wildflower was a lifer for me - it was the first time I've seen it blooming :-)

The Generals Loop Trail is a very nice easy hike to get acquainted with the giant sequoia at Sequoia National Park. Although my friends usually enjoy more challenging hikes, I wouldn't have let them skip on that one. I see it as a personal mission to introduce all my visitors from overseas to the wonder fo California's Big Trees!