A Royal Swell: King Tide at the Hayward Shoreline

Last spring I posted my recommendation of the Hayward Shoreline Interpretive Center (HSIC) as a great place for family hikes and class field trips. Last week my younger chika's class went on a field trip there, which I was happy to chaperone. It was then that I found out it was king tide time for the pacific coast. The water level was low enough for the children to observe mud critters, but water was rushing speedily in and by the time we left the entire area was flooded.
We left HSIC about half an hour before the tidal peak. As soon as I got home and checked the online tidal chart and saw that the last day of the king tide was going to be on Saturday, Dec, 14.

The tidal cycle is caused by the gravity pull of the moon. King tide happens when the sun is aligned with the moon and adds its own gravity pull. The combined pull of the sun and the moon results in extreme tide, called king tide. This king tide reached its highest (7.5 ft) on Dec. 12. On Dec. 14 at 1:13 pm water level reached 'only' 7.1 ft. Not the highest, very impressive nonetheless.

Papa Quail had taken the little chika to a birthday party so I took the older one with me to the Hayward Shoreline. My older chika is very fascinated with royalty, and was excited to go and see the 'king'. We arrived at 1:00 pm and immediately went on the trail. 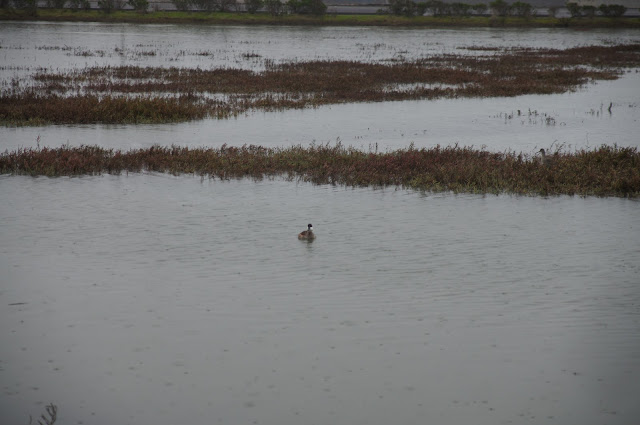 It was hard to recognize the landscape from what I've seen last spring. We arrived there just before the tidal peak and everything was already flooded. Ponds, slough and vegetation fields alike.
It drizzled the entire time we were there. The chika started the hike complaining about being cold and itchy, despite of the thick coat and hood she was wearing. I didn't mind the rain as much. My main concern was keeping the camera dry. I did so by keeping it under my poncho and only pulling it out for quick snapshots.
We didn't expect to see many wading birds there. We did see many ducks, including this sole Ruddy Duck:
We didn't expect to see wading birds but we did see them. Waiting for the tide to recede.

Every time I go to the Hayward Shoreline I wonder about this windmill. On my chika's field trip I learned that it is an artistic representation of actual windmills that were used in past days to move water between the ponds.
I didn't expect to see any flowers there at this time of year, but this marsh gum surprised me. Just like the spring flowers there, the marsh gum too is yellow.
I also noted the progress in building the new power plant. It, too, looked like an island. 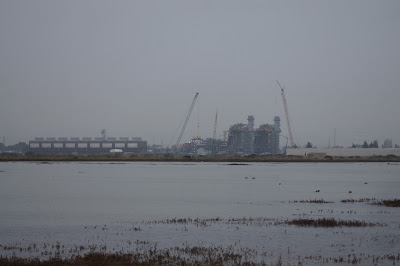 Just like last time, we made it to where the slough enters from the bay. The pond, so calm and rich in birds last spring, was full to the brim with turbulent grey water. 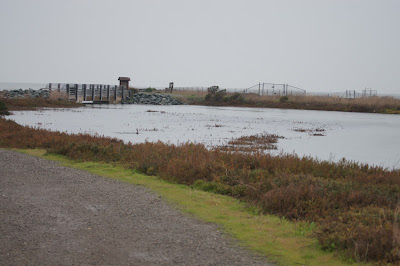 A single bird was there - one Western Grebe that kept diving again and again in one place, looking for goodies brought in by the tide.

Below the bridge were some remains of the mud nests build by the cliff swallows last spring. The rains have washed most of them off, but in some places there were still muddy remains. One of them even held three abandoned eggs still.

I tried convincing my chika to continue beyond the bridge but at that point she had had enough of hiking in the rain s we turned about and started back. At that time the tide has already started receding so we were walking against the water flow.

In between the green vegetation we found mushrooms. It made my chika very happy - she loves mushrooms. From that point on her entire attitude has improved considerably. She became excited about everything we saw and didn't mind the rain anymore. 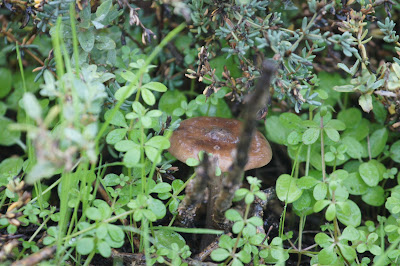 There were plenty of willets huddling together by the slough. They appeared sleepy and uninterested in anything.

Least sandpipers, on the other hand, took immediate advantage of the receding tide and started foraging the newly exposed ground, even right by the trail:
The great egret that was too far to photograph on our way out had come near the trail. A bright splash of white in the overall grey scenery.
When we got near the HSIC I photographed the marks of the king tide from 12/12. When it was at its highest - 7.5 ft - the water had flooded the trail itself.

We finished our hike with a visit inside the HSIC where, with the guidance of the naturalists, my chika got to explore some of the house snails. Apparently they emerge from their shells when hummed to.

Rain or shine - the Hayward Shoreline is always a great place to discover bay wildlife. It is an excellent place to feel the pulse of the bay area nature.