I opened this blog on April 2012 and my first entry was about a hike in Anthony Chabot Regional Park. I had planned to go around the lake but was redirected to the lovely Goldenrod-Cascade loop instead.
Last April I finally got to do what I originally had planned: to hike around Lake Chabot.

I started my hike at the Lake Chabot Marina, walking counter clockwise on the East Shore Trail. Right at the beginning I saw this pretty spotted towhee, singing on a small pine tree:
I go often on the East Shore Trail for exercise walks. For 1.7 miles it is a wide paved road that any time of day is shared by other walkers, joggers, bikers, parents with strollers, and anglers carrying their catch. I usually walk to the end of the pavement and back to the Marina.
Nearly always I regret not having taken the camera with me. This hike I compensated for it big time.
And the island in the middle - a bird sanctuary. The perfect nesting place for the Great Blue Heron.

Although late in April, the Buckeye tree is just preparing to bloom. The inflorescence looks like candles just before burning. All poised.
And nearby - an Elderberry tree. I used to notice it just for the distinguishable bunches of blue berries. Now I learned it has a lovely blossom too. The Elderberry was used by the Native Americans for treating respiratory illnesses. It is still used for this purpose today - its extract incorporated in over the counter pills.
And from medicinal to poison: the very common Poison Oak. Ouchy, yet beautiful.
While annual bloom was on the decline, the shrubs and geophytes were going on strong. The hill sides were orange for Monkeyflower bushes in bloom. I chose to post a close up:
And this White Globe Lily, the common relative of the endemic Mt. Diablo Globe Tulip. There were many of these pretty flowers all along the trail.
Small creeks run down hillsides and into the lake. This one I often see running during winter. This past winter I even saw it gashing. At the end of April there was barely moisture in the dirt. 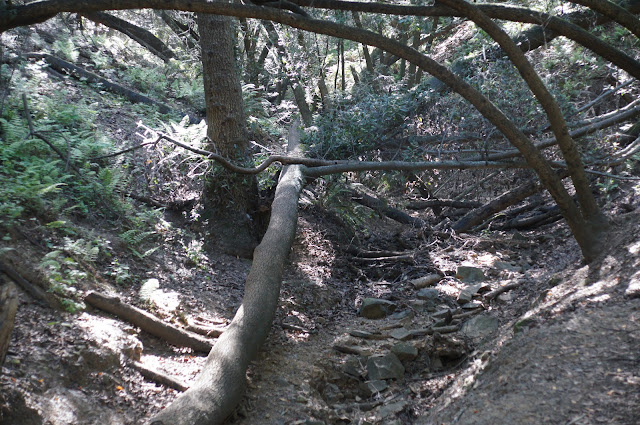 Approaching the end of the pavement of the East Shore Trail one can see large and perfectly round islands of tule. I suspect each started with a single plant which spread equally in all directions to form a perfect circle. These tule islands are perfect hiding places for nesting coots and other water fowl. Kayaking in this water is a good way to approach the bird in an easy, relaxed manner for close observation. This, though, I save for another day. 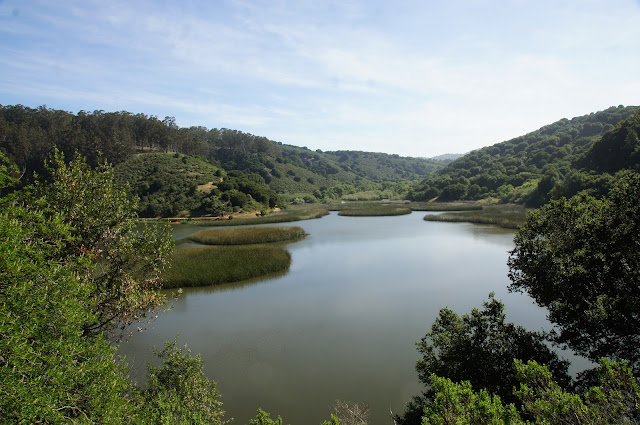 Himalayan Blackberry is plenty on the slopes by the trail, and in between other wildflowers can be seen.
It is nice to see that there is much native vegetation still growing in the park. I am slowly getting to know the local plant species and their origins. The diversity of plants in the Bay Area is just staggering!
Just past the pavement there is a little box where anglers can get their fishing permits. A pair of Bewick's Wren fancied that box and I sat and watched them for some time as they flew in and out, carrying twigs to build their nest. I informed the park authorities about the bird's activity, hoping they'll put a sign to redirect the anglers to another location for their permits. Wouldn't it be nice if the pair would get to raise their young there? I really aught to go back and find out!
The East Shore Trail curves sharply to the left and follows the lake's contours. A narrow bridge is hang there over the creek but the trail widens once more after crossing it. On that side of the lake the area is drier and sunnier. The flowers I see are, in turn, different.
At this time of year, practically everything in bloom is perennial.
Not long enough into the dry season. The greenery is just amazing.  The hills display 50 shades of green. This number is just for the pun of course. In reality, there are at least a 100 shades of green if not more!
The vegetation on the lake shore thinned enough to see this heron. It looked back at me with some concern but didn't fly away.
At some point the trail leaves the lake shore and climbs up the hill. I was getting very hot and trying to find the origin of the calls from above the hillside provided a good enough excuse to stop and look around. With some effort I finally detected the caller: a papa quail in the chaparral!
I told him I was already spoken for and moved on. The main trail continues toward Honker Bay and that is the biker 12 miles loop. I turned left onto Columbine Trail, which continues along the lake shore, high above it.
The Columbine trail goes below the campgrounds and is basically all in Eucalyptus-dom. There isn't much undergrowth in that forest, save for the ever-present poison oak and a few weeds, mainly thistle. I had planned to have a rest stop at the half way point but the trail there is very narrow and outside of it there was too much hostile vegetation.
After about 6 miles the trail goes town towards the lake and the eucalyptus is replaced by native oaks and laurels. On my way down I was met with loud screams from above: an angry pair of chickadees were shouting at me.
No wonder. They had a nest in a tree hole nearby. I looked inside and saw a few yellow beaks in the darkness. It was too dark to photograph though. I wished success to the parents and moved on, descending toward Bass Cove and the meeting point with Bass Cove Trail.
The trail leaves the forest on the descend and the birds' shouts were replaced by very different calls: the loud, high-pitch shrieks of the Cicada. It took some effort but eventually I spotted one of the singers:
Amazing how such a small bug can make such a big voice!
The Columbine Trail meets the Bass Cove Trail at the crossing of the Grass Valley Creek and continues north to become the Cascade Trail. I turned left onto Bass Cove Trail and continued along the lake.
It was like seeing snow in the middle of summer. Very odd. 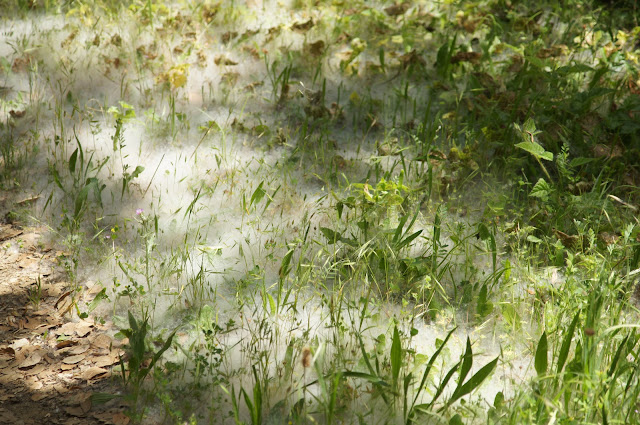 Not snow, of course. Seeds. Gazillions of seeds. All from this, not very large, tree:
Very pretty when trapped in a spider web. I'm not sure the spider was happy about it, though. 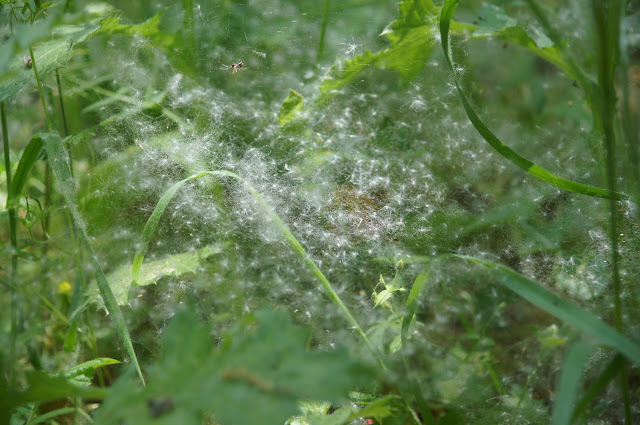 Bass Cove Trail brings me back to the water front and under the trees. The tree cover isn't complete, though. Patches of sunlight filtering through the canopy brings out the beauty of the ferns ... wait. It is the penetrating sunlight that enables this lovely fern undergrowth to begin with!
In places, there is a clear view of Bass Cove. There I saw these affectionate mother and child:
A small group of huge fish that troubled the waters with their spring activities:
And a tired-looking Turkey Vulture, quenching its thirst with lake water:
The Bass Cove Trail follows the lake all the way to the dam. At some point the Goldenrod Trail joins it. I did describe this part of the trail before, but this time I got to see (and photograph) the butterflies!
This one kept fluttering about. Eventually I did get a clear snapshot:
Here's the dam that keeps Lake Chabot in place, built in 1874-1875 by Chinese laborers. The lake provided water for residents of San Leandro and the area. It is still held as an emergency water source and swimming in it is prohibited.
I crossed the dam and got onto the West Shore Trail, wide and paved as well. There are interesting information panels along the dam and the north part of the West Shore Trail, telling the story of building the dam, treating the water, and the nature of the lake and area. There is also information about Anthony Chabot, the man responsible for many of the East Bay lakes and after whom the lake and park are named.
At that point of my hike I started to hurry. It was almost time to pick up the chikas from school. I did stop to appreciate the trail side flowers, however:
I was excited at first to see this one:
It colonizes the disturbed areas of the hillside that were exposed by rock slides and gives much color to the bare patches. I did learn later that this species is non native and likely have propagated from city gardens where is is quite popular.

But the best treat of this hike I got just as I was closing the circle, on my last steps before reaching the Lake Chabot Marina. There in the woods I saw an orchid! A Spotted Coralroot that was just beginning to flower:

The short way around the lake is 9 miles of beauty. I walked it in a leisurely pace and completed the circle at exactly 5 hours. Should have done it for the one-year anniversary of this blog maybe, but I never was good about remembering dates :-)


As I was writing this post I got the urge to go and get another look at the orchids and the wrens, so I went this morning to the park with my camera.
Almost four weeks after my April hike - nearly all the orchids in that patch were done, except one that was still in bloom. Waiting for me, I suppose :-) This time I climbed up the slope of poison oak to get a close up:

After visiting the orchid I went to check on the couple of wrens in the fishing permit box.
On my way I saw the Buckeye candles alight with bloom:
And I was tempted to take a close-up of that too:
When I got to the box I saw no activity there and no sign that it was ever used for anything but getting the permits. A stack of new little envelopes was in the place where last month I've seen the wrens. Four weeks after - they could have finished their parenting and flown away. More likely that they had had to relocate. Probably better for them anyway.