Things I saw in the Slough: Hiking at Humboldt Bay NWR

The last night of our 4th of July trip we spent in the coastal town of Eureka. We woke up to the chill of a foggy morning which, after the intense heat of Willow Creek, was a much welcomed relief. After a quick breakfast we headed straight to the sole destination we planned for that day: the Humboldt Bay National Wildlife Refuge. 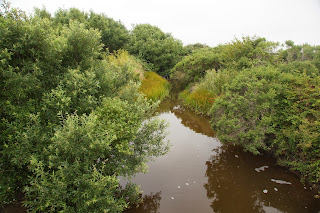 After a short visit to the visitor center we went out on our first trail: the Shorebird Loop Trail, that begins right behind the building.   For about half a mile the trail meanders along a narrow slough. Close to the beginning there is a small observation hut.
By the time we were there I already had to run twice back to the car to get the chicka's sweater and the bug repellant. Throughout the hike we were walking through a cloud of hungry mosquitoes. We needed the protection. 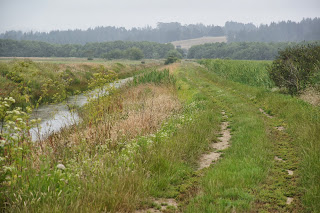 The ground, even on the trail itself, was completely covered with green vegetation. Many plants were blooming. 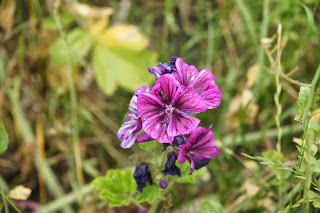 Most of what I've seen in bloom were invasive plant species.
Nonetheless, the flowers were very pretty.

After half a mile the trail splits and loops around a large pond. The calm water was closely watched by egrets and herons.
The dense cattail thicket provided shelter to many birds. We heard them well enough. On occasions, we saw them too.
If they stayed long enough above the water, that is.
The pond water was so calm, like a perfect mirror. It is difficult to select from the many beautiful reflections I photographed that day. 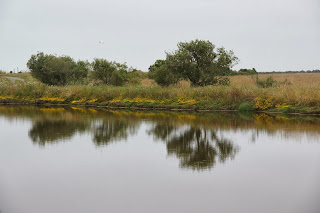 We walked slowly, imbibing the sights and sounds carried by the thick, humid air. As always, the chickas were quick to spot the ground crawlers on the trail.
Or those winged ones that just sopped for a rest, like this moth:

Bu then the elder chicka made a much more important find: A Virginia Rail that stepped momentarily out of the cattails.
Rails aren't that rare. They are, however, very difficult to see. They spend nearly all of their time hiding in the thicket. Needless to say, Papa Quail got very excited about the rail and the chicka was very proud of herself for having spotted it in the first place. In fact, she kept going on and on for the rest of that day about finding a rail for Papa :-)
The trail continues beyond the pond and near the slough that extends from Humboldt Bay. It was low tide and the mud flats were criss-crossed with bird tracks. The birds themselves were no longer there. 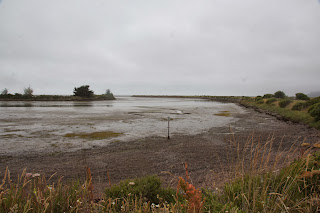 We looped back and neared the canal once again. 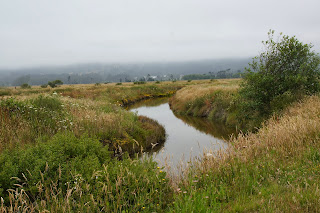 I was looking at the weeds that were blooming along the canal banks, coloring it with whites, pinks and yellows, and rendering those very same colors to the murky water below. 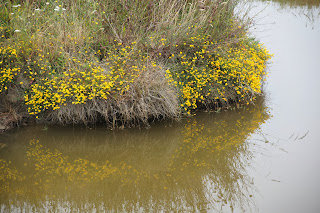 And it was there, in the canal, while I appreciated the flowers, that I saw something brown swimming. Sure enough: there was a pair of river otters! Right there in front of our eyes!
We were very excited, of course. The otters were less excited and swam off.
It was a very good hike for viewing wildlife. While there wasn't as much excitement as with the rail and the otters, we were very happy to see the Black-tailed Deer in the meadow behind the canal.
And as always, the small, pretty singers who hummed all around us while we hiked.
At that point were were getting back into mosquito-dom and found out that one layer of bug repellant was not enough. Each of us was sporting quite a few bites. We hurried to the end of the trail.
What can I say? Mosquito bite, plenty enough to play connect-the-dots on our skins were a small price to pay for the chance to walk in this beautiful refuge and to see its rich wildlife.
We had enough of the mosquitoes but not of the Humboldt Bay NWR. So we packed ourselves and drove around to the other side of the park where, after a quick lunch, we embarked on another hike along the Hookton Slough.


Many thanks to members of the California Wildlife Appreciators for their help in identifying the moth!


A few months after that trip my elder chicka was still talking about the Virginia Rail she had sighted. Being the artist she is, she drew a painting of the rail and added a few avian friends too :-) 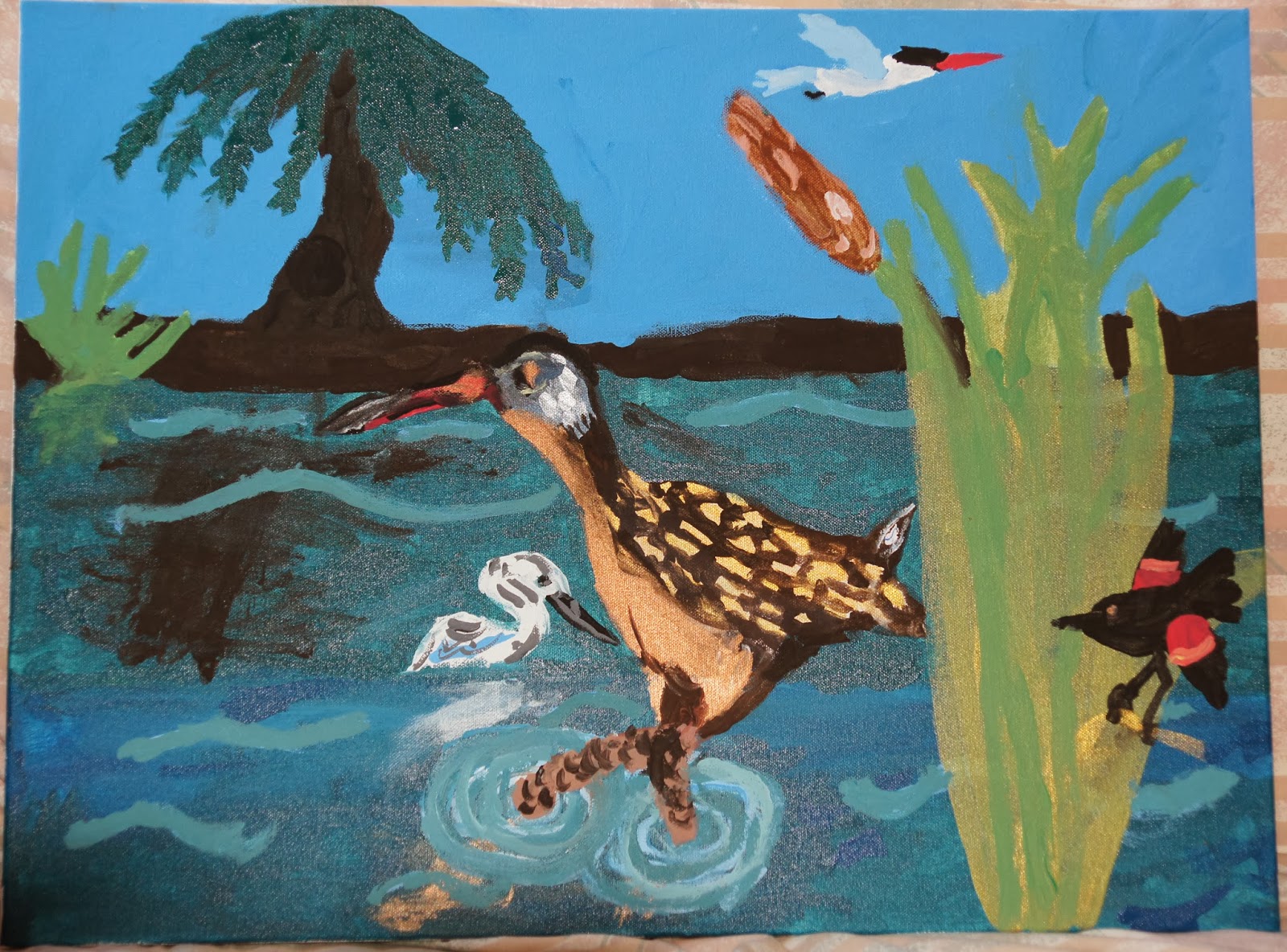