A Scorching Day at the Smittle Creek Trail by Lake Berryessa 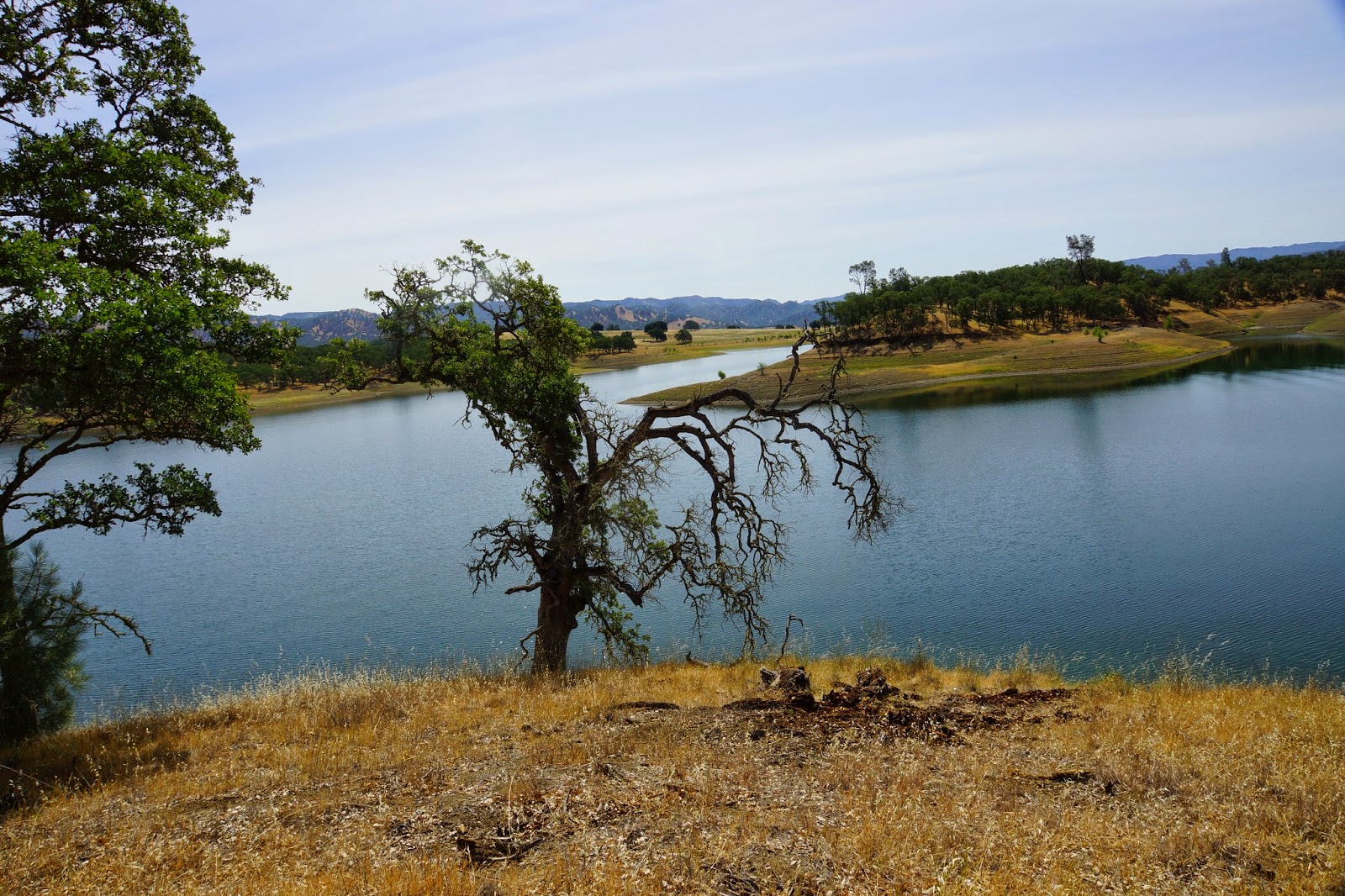 Last Memorial Day Weekend we went with friends to explore Lake Berryessa. The lake, nestled in the hills east of Napa County, is a large recreational area and provides plenty of opportunities for outdoors fun for vacationers, including a few hiking trails.
We arrived at Putah Canyon campground on Friday evening. After the excitement of our arrival, which was much enhanced by the sighting of a small rattle snake right by our campsite, we had a quick dinner, pitched our tents and went to bed.
We had planned a long weekend of Nature fun and lots of hiking. Not in our plan was the triple-digit day time temperatures.
Night time temperatures were only slightly lower. It was hot and muggy and the people in the neighboring campsite had a loud domestic dispute late into the night. In short - we didn't sleep well at all. What cheered us was the sighting of a very close by osprey nest.
We headed out to the hiking trail right after breakfast, hoping to put as many miles bend us before the heat became unbearable. The campground personnel suggested a few trails and we selected the Smittle Creek Trail, which is south of Putah Canyon Campground where we stayed.
This trail connects the Oak Shores Day Use Area. We left our cars at the north one and begun hiking south along the lake shore. 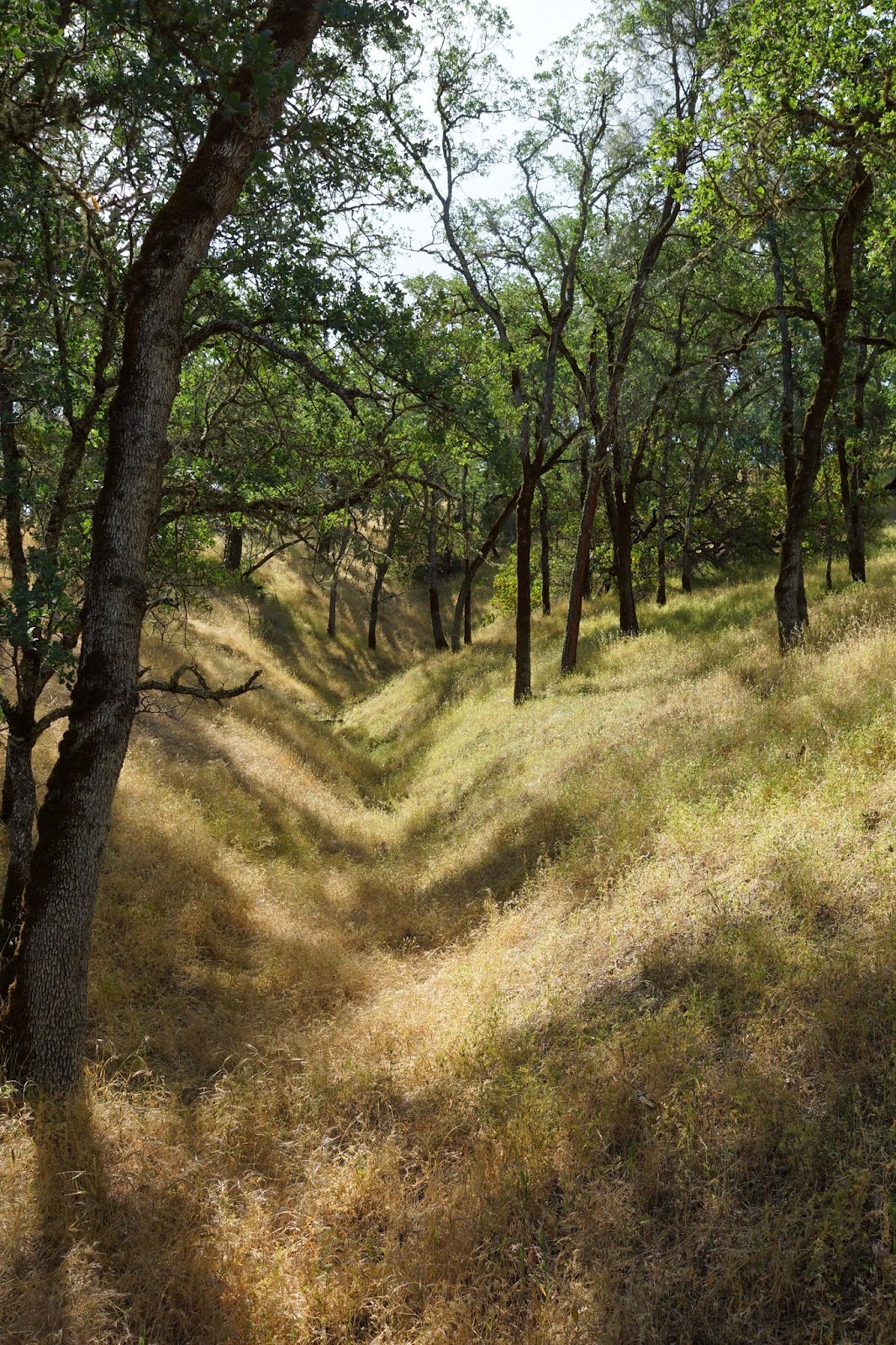 I didn't expect to see much green this late in spring and indeed, the grasses were in advanced drying state. The sloping hillsides were covered with live oaks and very soon we were thankful for every spot of shade we got when the trail delved into the forest.
The grassland underneath the oaks wasn't just greenish-yellow. It was also dotted with quit a few colorful late spring wildflowers.
Lake Berryessa is quite large but, like other California lakes, has lost much water in the course of the recent drought.
We didn't see the woodpeckers, but their work was all around us to see.

The most common woodpecker in that area is the acorn woodpecker. Their larders where everywhere.
Live oaks are the dominant tree species there, but other trees can be found here and there. The madrone, as usual, stands out with its bright red, peeling bark.
Another tree we saw there was the California Buckeye. Still in bloom, like a big, festive candle chandelier.
The temperatures were rising. Soon we were halting under every little patch of shade along the way to gulp some water and wipe the sweat off. 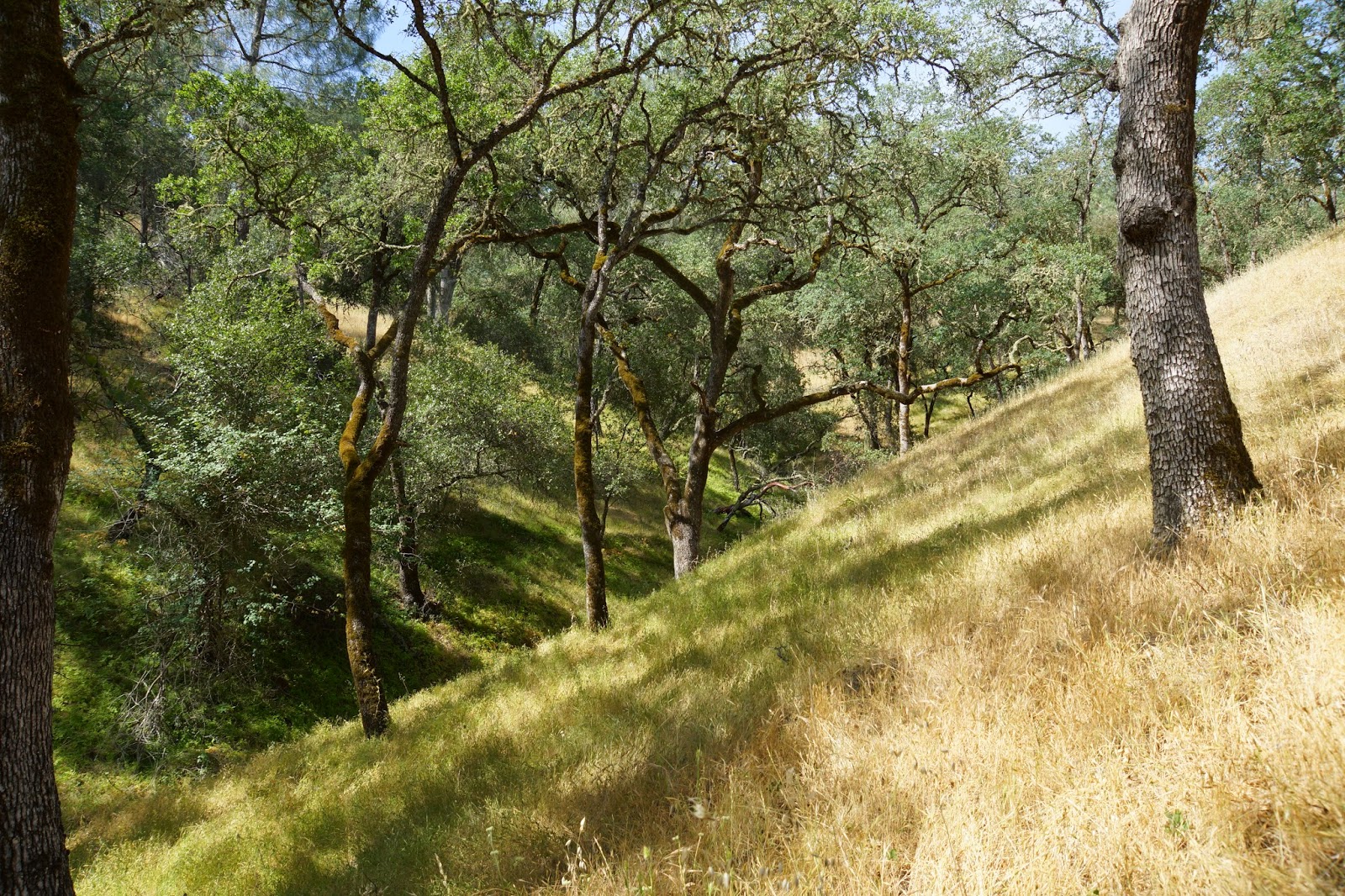 Frequent stops means more attention to the little things. Things that are camouflaged too well to notice on a fast walk. 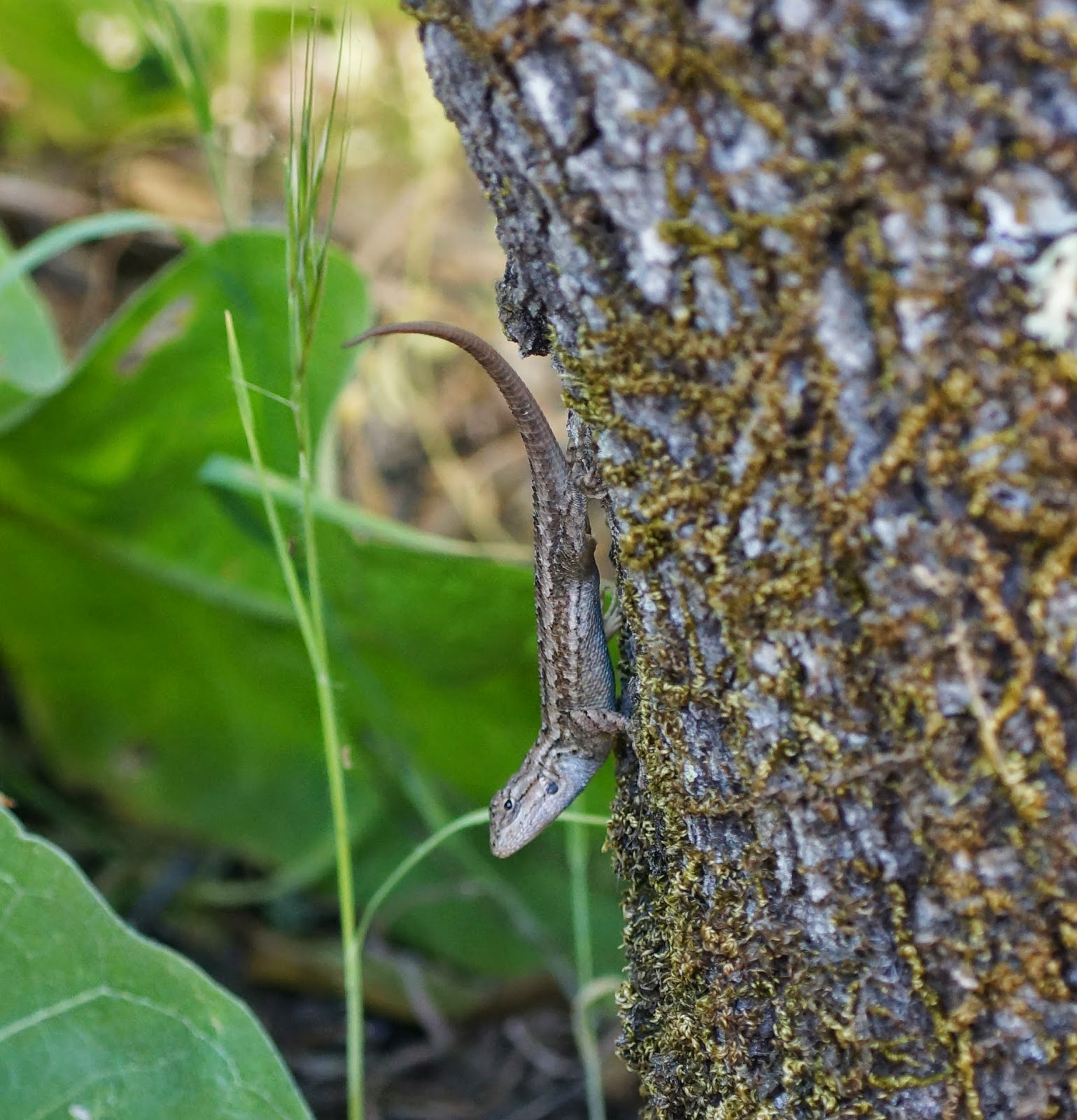 Or not camouflaged at all, but too common to otherwise stop for.
At some point we found that our friends were no longer with us. They have continued fast down the trail without realizing we weren't following them. We didn't hurry to keep up. The chikas were getting exhausted by the heat and there were just too many pretty flowers too look at closely.
The trail meanders along what used to be the lake shore and now is far above the water line.
The exposed lake bed was reclaimed by vegetation. Not trees yet, but if this drought continues (I sure hope not!) then the forest might make its way back into the valley floor.
By then it was very hot indeed. Had we all stayed together we might have made the decision to turn back. Since our friends have disappeared ahead we had no choice but to continue on and let the flowers brighten the mood.
I found there a common member of the chaparral community. It was interesting to see it all alone, in a non-chapparal area.
Heat waves were rising from the ground. The whole scenery, beautiful as it was, was swimming in front of my eyes.
Looking down, avoiding the glare of the sun. Seeing the little flowers that reveled in it.
And the lizards who were celebrating it. 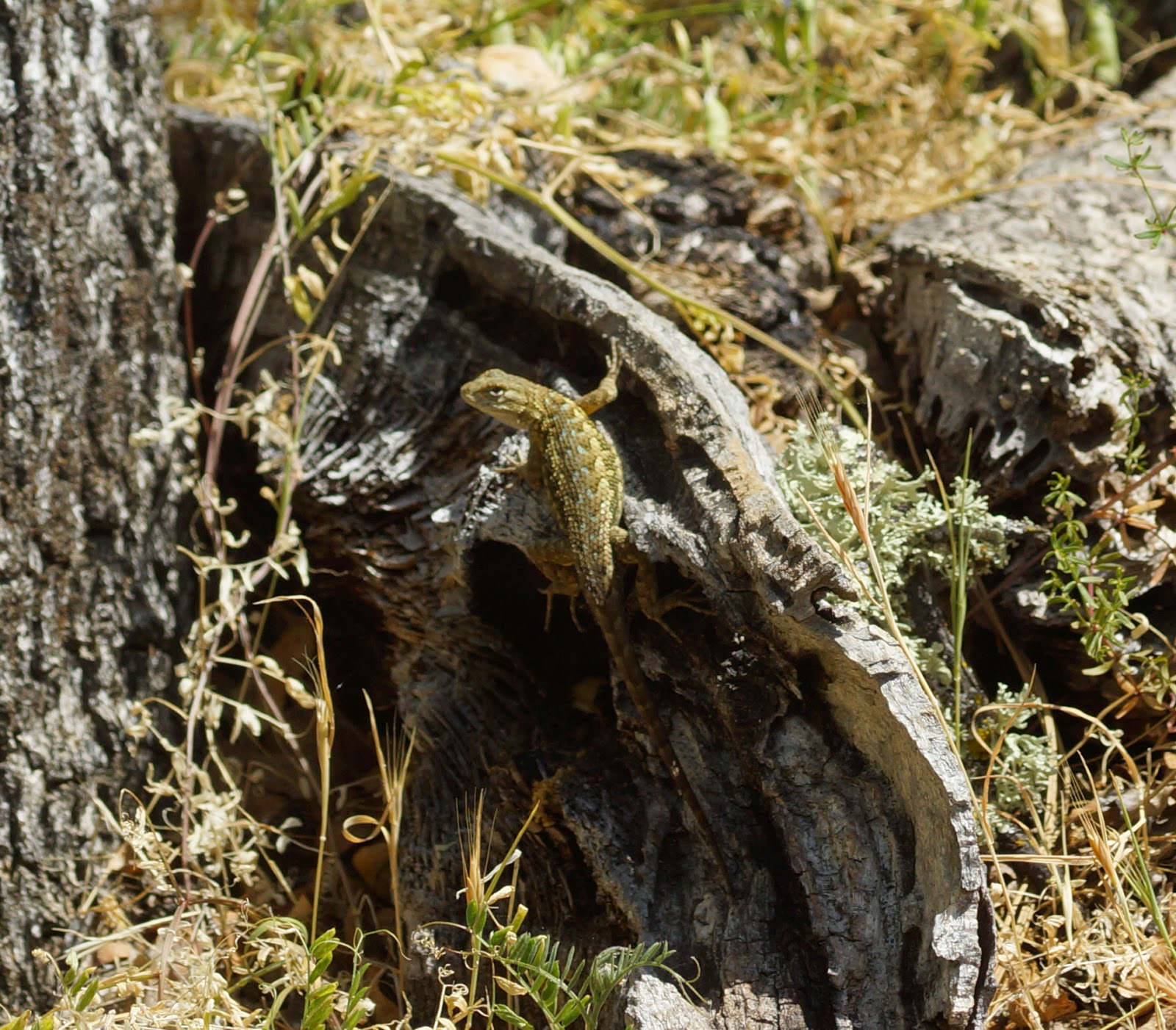 And then, all of a sudden, we were one curve away from the Oak Shores Day Use Area Area and the end of our trail. Are friends were waiting for us there and as they saw us approaching they started waiving and shouting. Seeing them, Papa Quail took our younger chika by the hand and plunged into the vegetation,  cutting through were once used to be a lake's cove over to the picnic area. The elder chika was on the trail ahead of us so I continued after her. Soon I was very thankful for it because of all the lovely clarkias that were decorating the last portion of the trail.
We reached the picnic area and slumped under a picnic area shade canopy. Our original plan was for all of us to return the way we came but that was not going to happen. Not in that heat. After some rest and some snack one of our friends and I started back to get the cars. A gopher snake crossed our path.
After the first trail curve my friend suggested we cut straight through the hill to Knoxville road for a shorter, quicker walk.
Cutting through the brush isn't normally quicker, but the road was pretty close and I agreed. It wasn't easy going up the hill but we did reach the road without too much trouble, and got to see some more flowers along the way.
We got the cars and headed back to the campground. The kids run straight to the water and the adults collapsed in the shade. After I rested enough I got up to prepare lunch and I noticed Papa Quail aiming his camera to the sky. There was the osprey, getting lunch as well.
She had a very good reason too - a hungry youngster was waiting for her at home :-)
It wasn't until much later in the afternoon before we were ready to go out for another hike.