We returned from our hike at Smittle Creek and crashed in the campsite. The heat was too intense to do anything. The chikas and their friend went down to the lake and submerged for hours in the brown, murky water of Lake Berryessa. The adults slouched around in various states of sleepiness.

At 4:00 pm I managed to get up and announced that we'll be going to another hike. It was hot no matter what, I argued, so we might as well find a more attractive place to spend the rest of the afternoon than the over-crowded campground where the booming noise of jet boats was pounding into our cooked brains.
It took a long time to get the children up from the lake, feed them (and us) and get ready to go. Then one of our friends who were camping with us, had decided he preferred to remain in the campsite. His son decided to stay with him. So eventually it was just us Quails with one of our friends went to hike at Pope Canyon Trail. 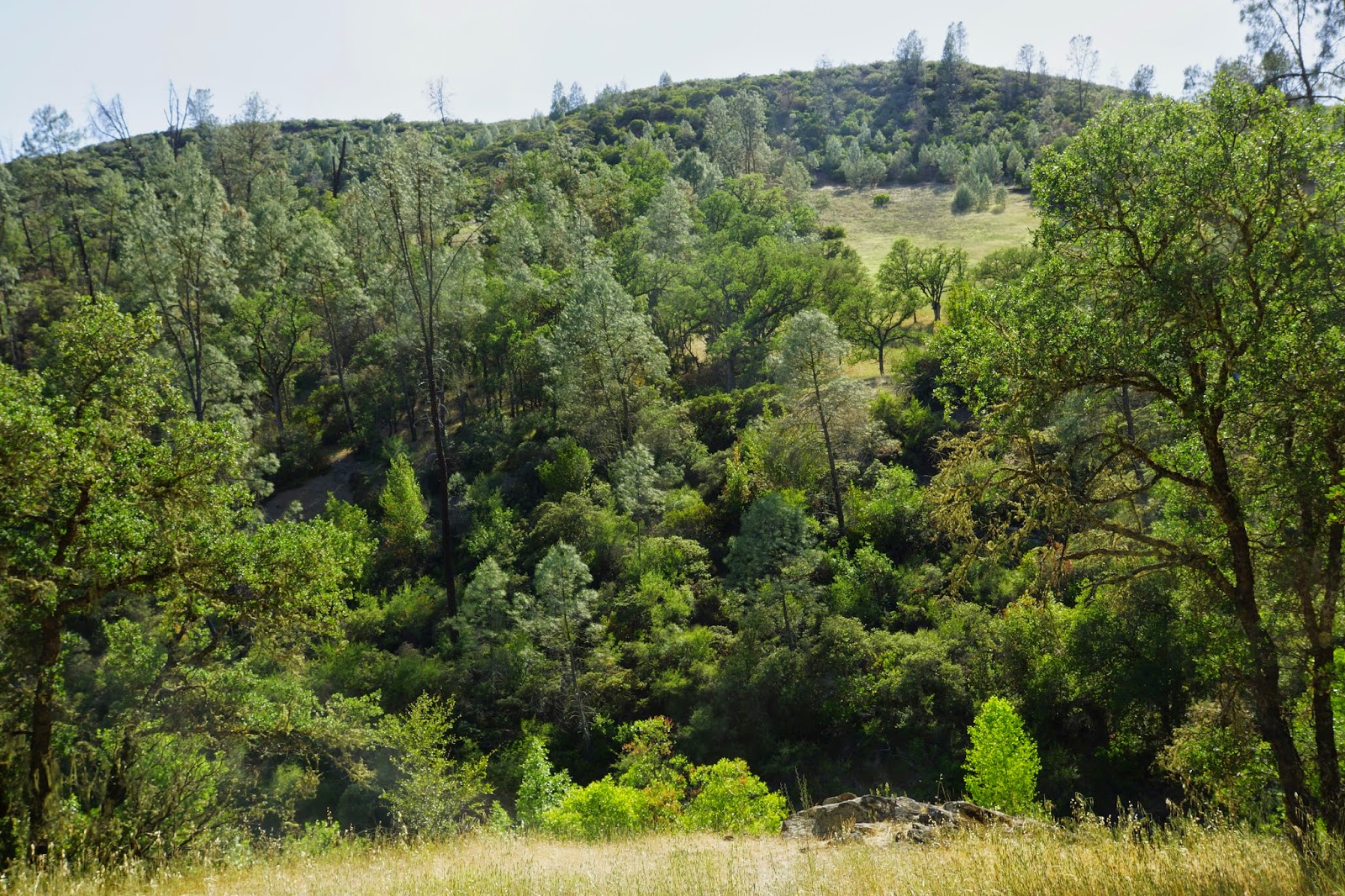 We did not have a proper map of the area, just a flier we got from the campground personnel. It had a simple illustration of the roads and the trail and a brief description how to get to the trailhead. Although it was unmarked, we did find it without too much trouble, because it was the only apparent trail beginning at that segment of Pope Canyon Road.
We parked the car at the small pullout, hoisted our water packs and cameras and plunged into the woods.
The trail is an old, apparently unused (or very little used) dirt road. From the road it descends towards the creek between a forest of live oaks. 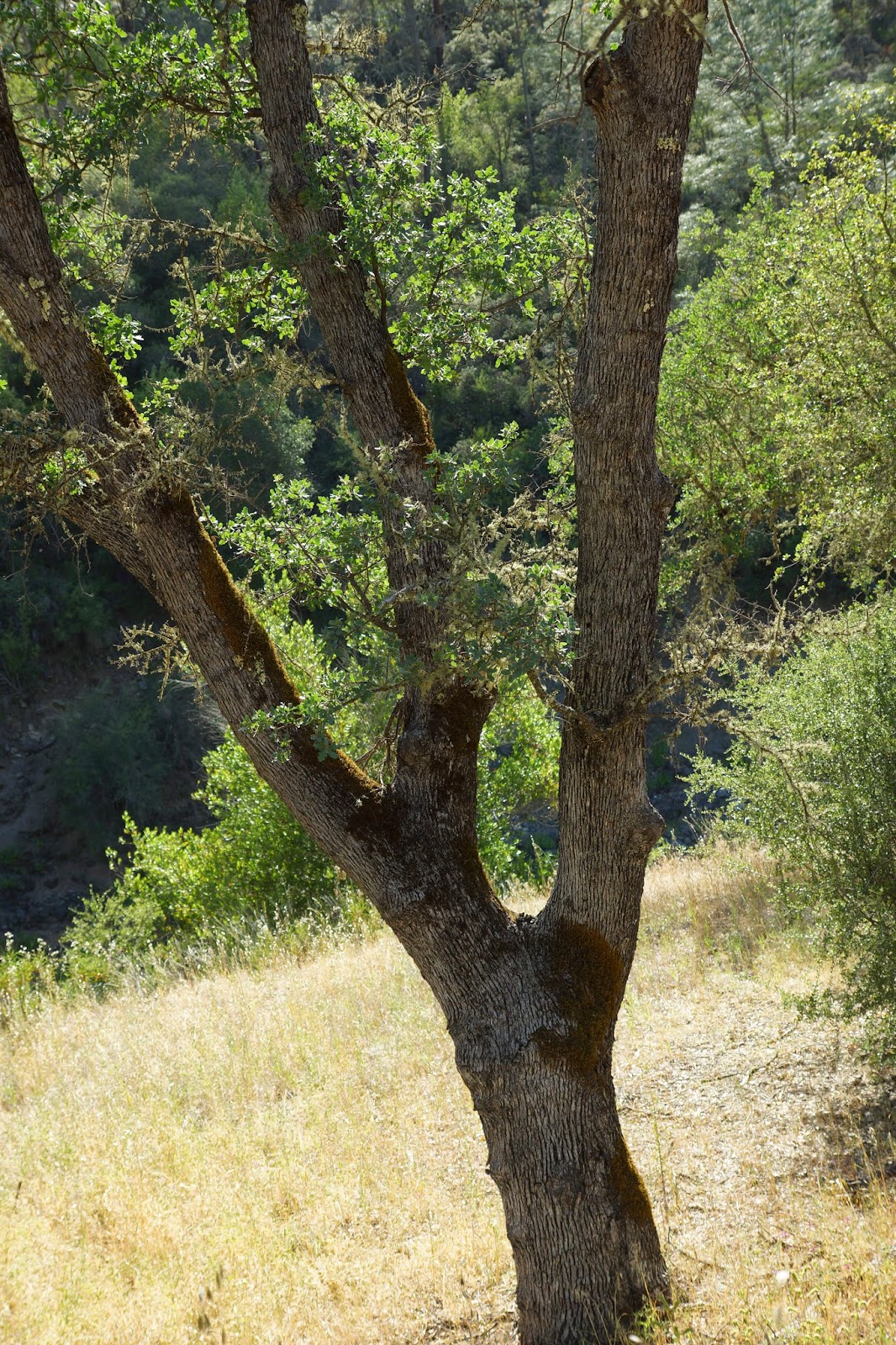 It was hot under the trees but quickly got much hotter when we reached the creek and the trees disappeared as we followed the creek from above. 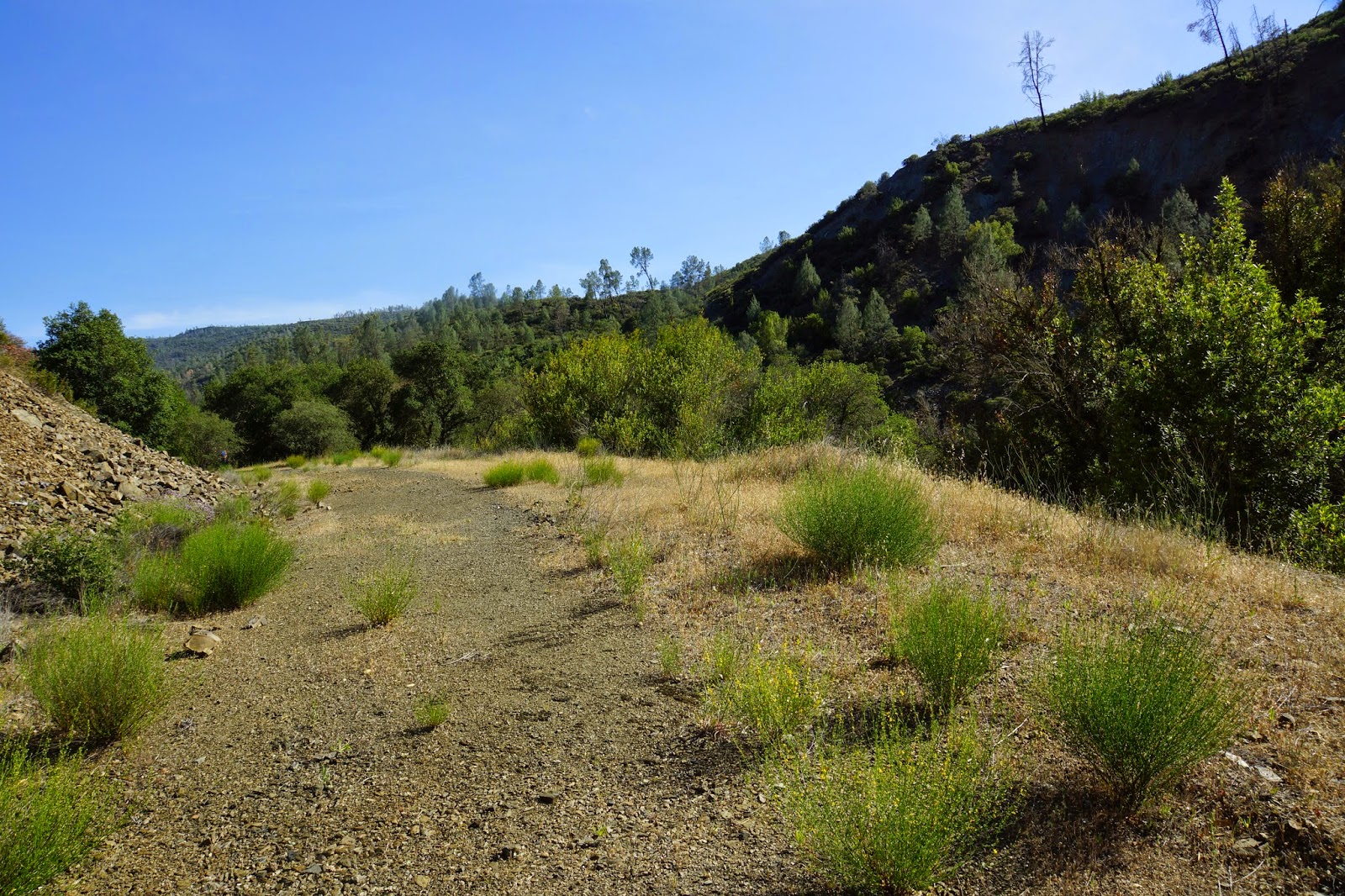 We didn't see any animals along the way. Not even lizards. They too, were taking refuge from the intense heat. Only crazy humans would be walking out in the sun in this weather.
The flowers, however, didn't hide anywhere.
There weren't many, but enough to keep me focused on the hike. My companions, on the other hand, have begun showing signs of heat exhaustion.
We stopped under a bush that was big enough to cast sufficient shade. I tried pushing the heat off my mind and explore the nearby flowers.
There was plenty of time to take a closer look. Apparently, we weren't going anywhere from under the bush.
Pushing on until someone succumbed to heat stroke was definitely not on our plan. Looking below, however, I suggested we should continue forward and find a way down to the creek, where we could cool off in the water. The idea was tempting enough to get the chikas from under the bush and we moved on.
On the flier we had there was a short broken line that marked a trail going down to the creek. Deciding we had walked far enough we started looking for it.
We found it, right around the cliff overlooking the canyon. The thought of soon dipping in the water had us almost running down that trail.
The downward trail turned out to be almost fully overgrown with vegetation. It sure has been a long time since anyone went down that way. We had to push our way through the thicket, often worry whether the trail would be at all passable. At least the bushes were blooming.
We did make it down eventually. There was more shade below, and also one very pleasant surprise: a spicebush in bloom!
At the bottom of the trail we faced another obstacle. One that almost had us give up in despair. Between the end of the trail and the creek bed grew a field of high, sticky and thorny weeds.
After our campground rattle snake encounter we were all worried about meeting them in the tall grass. Going through these weeds was difficult, and we couldn't see a trail going down the last ledge over the creek. At that point Papa Quail and the chikas were ready to call it quits.
I wasn't ready to give up yet. Not when we were so close! So while the rest of my family sat in the shade at the bottom of the trail, gathering their energies to go back up I scouted some more in the field of weeds.
My dogged stubbornness eventually paid off - I managed to find a path to the creek through the weeds and a patch of willows. I went back to my family to find that my friend was already half way up the trail. With renewed energy I run up and convinced her to go back down, and together we plowed through the narrow path in the weeds and found ourselves at last near the water.
It was late afternoon and the shadows were getting longer, but still haven't reached our side. We found a place to cross the shallow stream to the shady south bank. Papa Quail laid down on the pebbles and dosed off while all the rest of us stripped and entered the water.
The water, shallow, murky, and overgrown with algae as it was, was heaven to us. We felt the heat leaving our bodies and our minds go clearer with every inch of skin submerged. We found pockets of deeper water where we sat with just our heads poking out. Then, after we cooled enough, we went up the stream to explore a bit.
The place is truly beautiful. I wish we'd had more time to explore it properly. If only it wasn't that hot!
By that time, it was getting pretty late. We needed to get back up while there was daylight still. So with much regret we got out of the water, dried off and dressed up. Papa Quail, who'd had a good rest, found the energy to lift up his camera again.
Going up was easier than going down. The temperature has dropped somewhat, and the shadows were longer. Rejuvenated by the creek water we made it back to the main trail and were on our way to the car.
The sun was setting, so we had to hurry.

Back at the campground, the chika's friend got annoyed when the girls shared our creek's experience with him and complained how come I didn't tell him we'll be swimming. How could I tell him how close we were all to have missed this swim! All I said was that I didn't know that we would, and that much of going someplace new is about exploration and discovery. It's all about taking the chance and seeing what's out there.