We had much to thank for, last Thanksgiving Day. On that day specifically I thanked for a fantastic hike at Lake Earl Wildlife Area that was very rewarding to us.
That hike had taken much longer than we expected and had missed lunch time by a couple of hours. By the time we were done with our belated lunch there wasn't much daylight left. Certainly not enough for a long hike.
There were ominous clouds hanging in the west but the promised rain hasn't started yet. We decided to go once more to Tolowa Dunes and take a walk along the beach.
There are several beach access points at Tolowa Dunes SP, and we chose the one at Kellogg Rd which was enough removed from town but not too far to drive to. We parked right by the beach, donned heavy sweaters and headed towards the strandline.
We saw evidence of a seafood feast that was held there prior to our arrival. Most crab shells were damaged, but this one remained nice and whole. There is such a thing as a civilized gull, I guess. 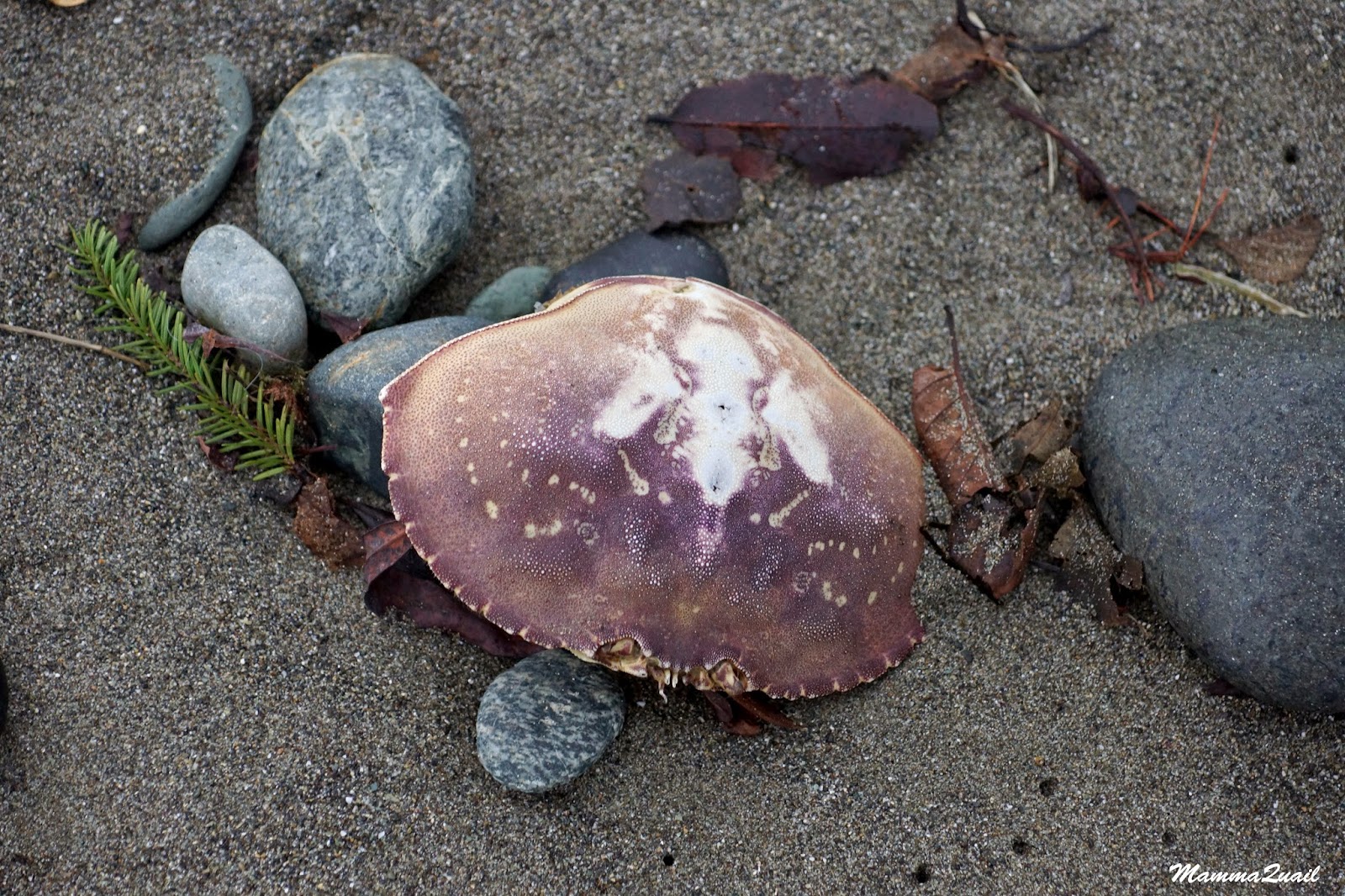 After some aimless wandering we decided to take the trail on the dune crest. The trail is like a trench in a sea of grass.
The grass was very impressive. And very hard too, with sharp, pointy tips that poked through my pants and irritated my skin. It was so tall that it was easy to lose sight of one-another when the trail dipped into the dunes or curved a bit.
The wind was strong and the grass moved constantly, wave upon wave, towards the horizon. 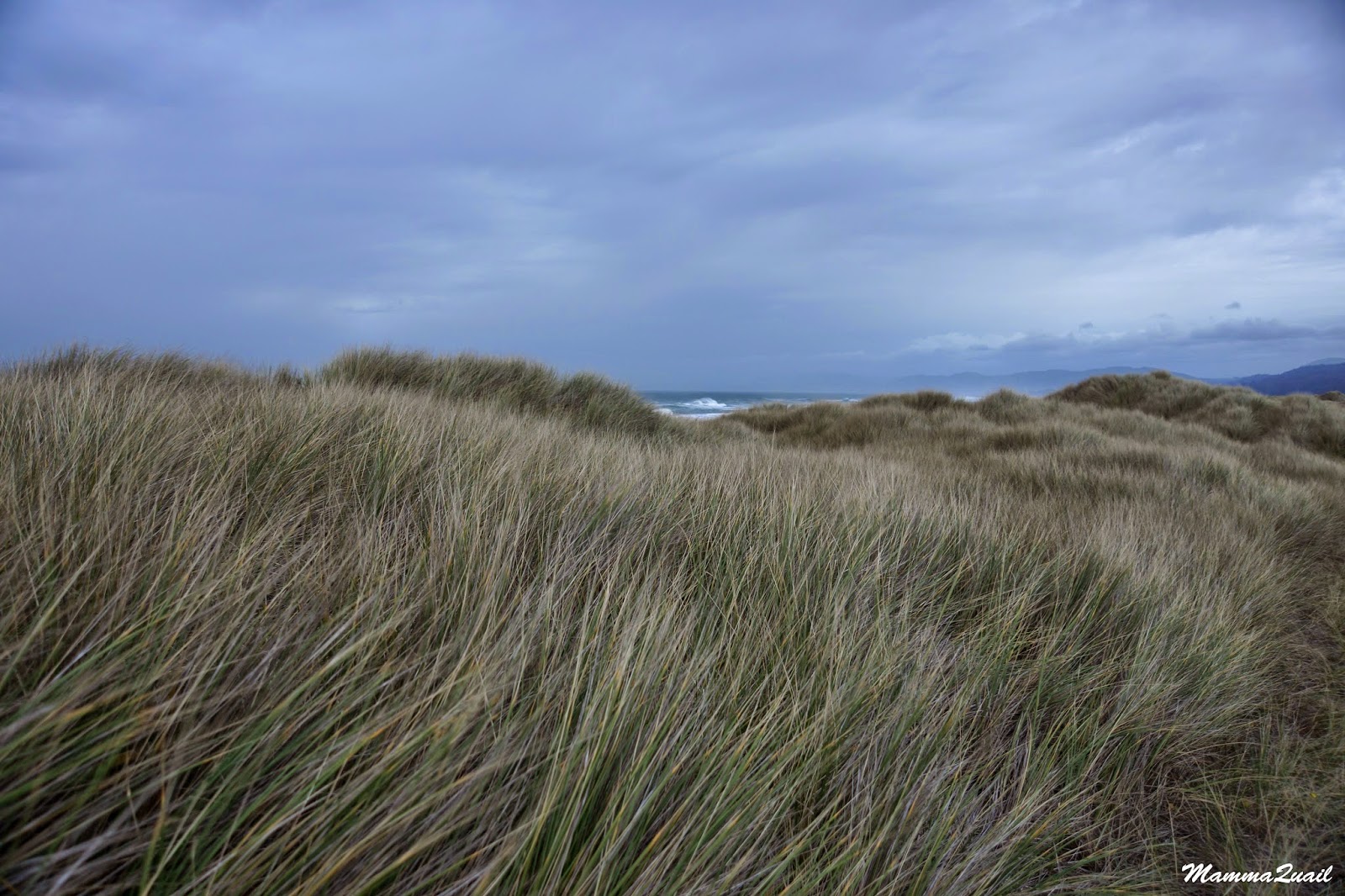 This grass is an invasive species that took over the beach dunes. I wonder how these dunes looked like before: were there other plants to bind the sand down, or was it free to blow in the wind? Maybe the Tolowa people have the answers.
On superficial glance, it seems that nothing else grows on these dunes. But a closer inspection reveals a few other species, mainly in more exposed  areas. Among them are the beach strawberry,

and beach morning glory, with its cute heart-shaped leaves.
We didn't walk very far. The hour was late and the clouds were gathering. The sky was darkening fast. After about half a mile we descended to the beach.
We didn't see much in the way of wildlife. But there was a large group of western gulls hanging on the beach right where we emerged from the grass. (Come to think of it, these gulls may have been the reason Papa Quail chose that point to go to the waterfront.
We strolled slowly along the water back to the parking lot. Ocassionally, a gull or two would take flight, circle above for a minute, then land back on the sand. A trio of southbound pelicans glided over the waves. 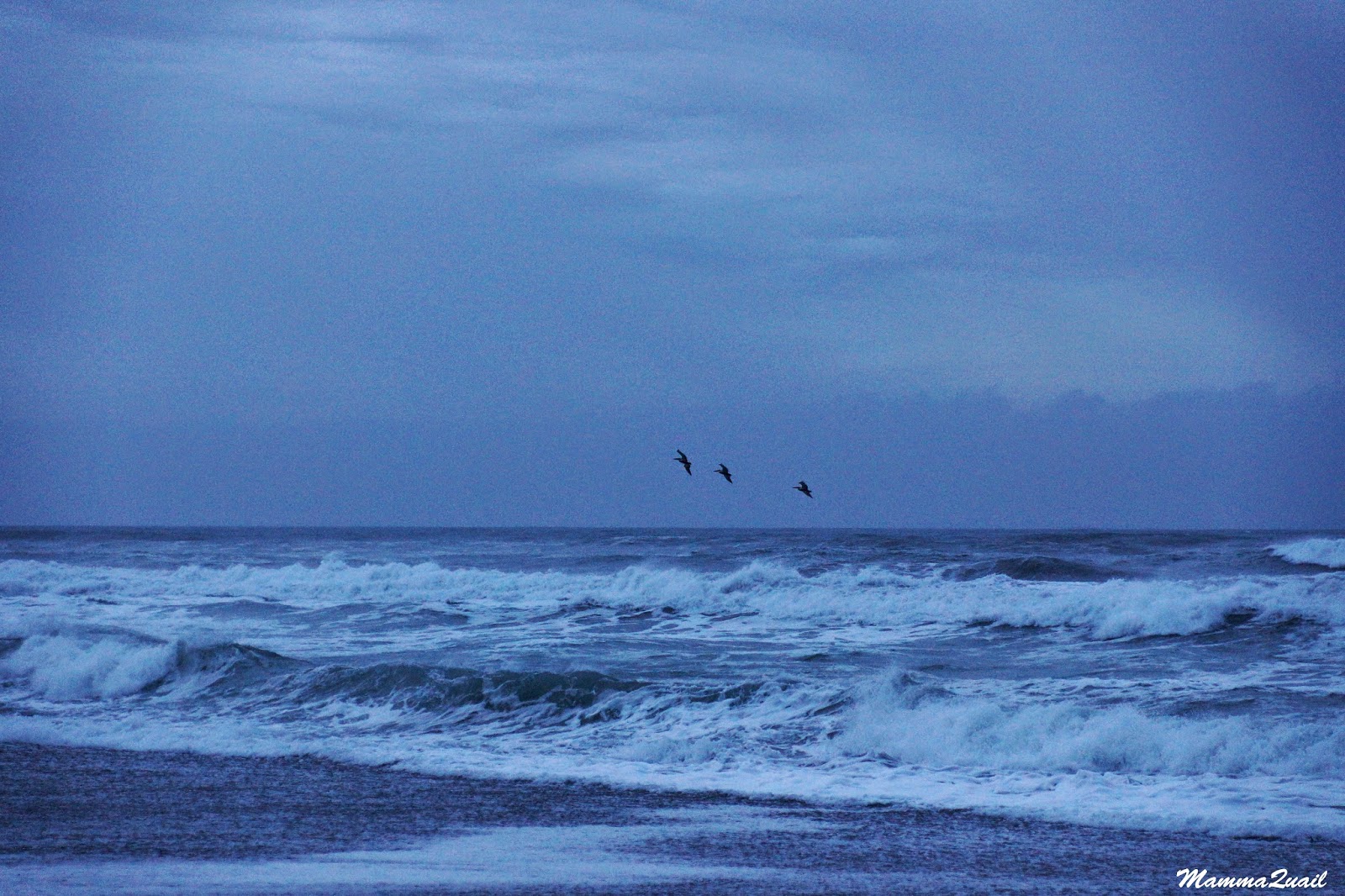 The shore was strewn with pebbles and seashells, rotting seaweed and pieces of driftwood, and some human junk. My family was ahead but I was walking slowly with my eyes on the ground, searching for something interesting. I found it in the form of a bunch of 2-inch long gelatinous-looking (and feeling) things.
I knelt down and took a closer look. These white things were egg pods. Squid egg pods.
Squid females deposit their eggs, one pod each, anchoring them on seaweed. Apparently a group of squid have lost their offspring when that piece of seaweed detached and washed ashore.
Looking for interesting things on the beach isn't just my thing. There was another person there on the beach that day, revering the ocean. I arched my way around him, but as I was getting near the parking lot I turned around and saw him walking almost next to me. He showed me a pretty seashell and told me it was a fossil. It looked thicker than regular seashell, but otherwise, I wasn't able to tell the difference.


He went on and I staggered behind, hiding my discomfort in a piece of driftwood that was covered with white spots. 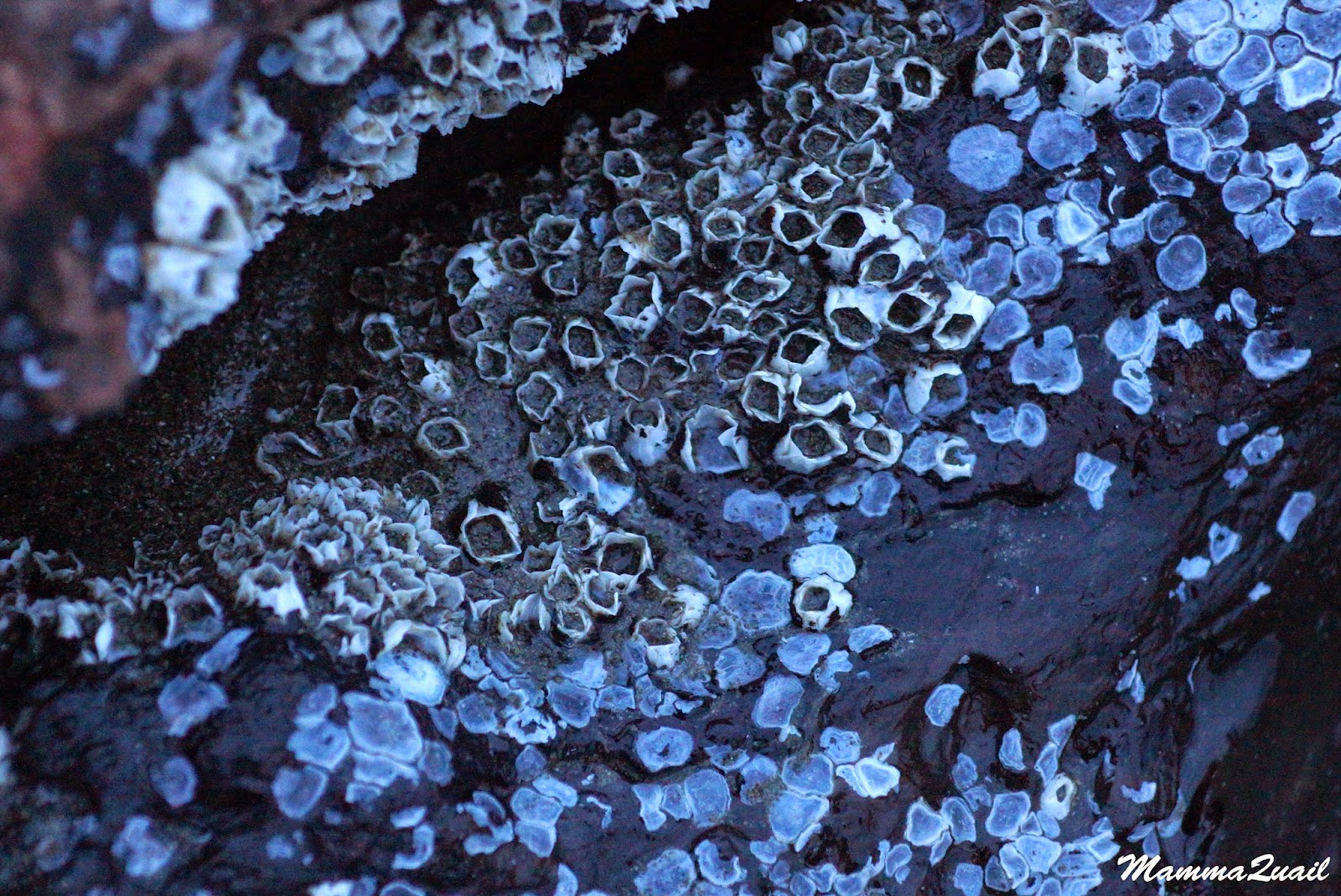 At last I was alone at the beach. It was almost dark and the foretold rain has finally began to edge its way ashore. I gazed one last time at the approaching storm cloud, then turned around and rushed to the car. I managed to quell the general impatience that was building up there while waiting by telling them that I had a surprise for them to look at. 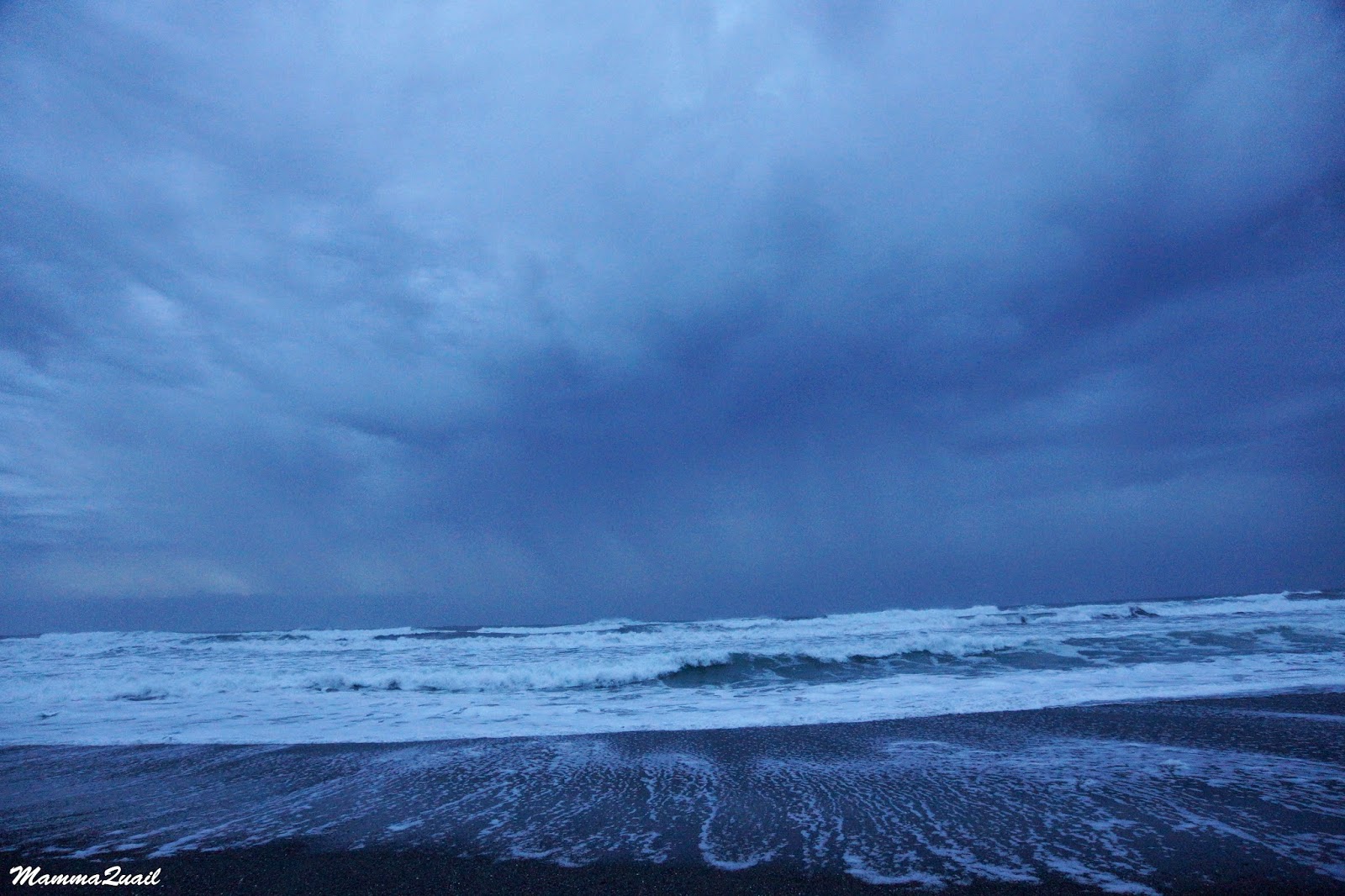 It was an egg pod that was separated from the rest and I took it with me to show the chikas. They got very excited and argued all the way back to the hotel who would have the honor of holding the squishy thing.
At the hotel room I cut it open for them, and tried to get a decent photo. Next trip I think I'll bring along my stereoscope. Or at least, a magnifying lens. It kept them busy enough while the adults were preparing Thanksgiving dinner.  There was indeed a lot to thank for that day.