Three years ago my family had a few hours' visit to Carrizo Plain National Monument. It was at the end of winter break and we were on our way home from a long road trip to the deserts of Southern California. I was curious about that spot on the map and about the 'National Monument' title for a place that was not on the NPS system and I convinced Papa Quail to check it out.

I found the place to be interesting and certainly worth going back to. I posted about that visit a few months later, and promptly I received a comment from my botanist friend that it was that place I should have taken her to, and she directed me to online photos that were taken there during spring. Following the link I saw photos of spectacular display of wildflowers, so magnificent that the thought 'photoshop' crossed my mind. In particular, there was a recurring scene photographed by multiple people of a deep gorge with slopes blazing with intense blossom. Having that image etched in my mind I promised myself to return to Carrizo Plain on the following spring.

But the drought, which started that year, didn't end. The following spring saw very little bloom there, and so did the next. The last winter, however, had had a very promising start. While, unfortunately, the promise wasn't fulfilled, I decided that it might still be worth the while to visit Carrizo Plain this spring. Bringing full equipment this time, we had stayed the night at the Selby campground.
First thing in the morning we drove up the dirt road to the trailhead. From the little pullout there where we parked, there was a lovely view of the campground area, with the large boulders poking through the plain's alluvium. 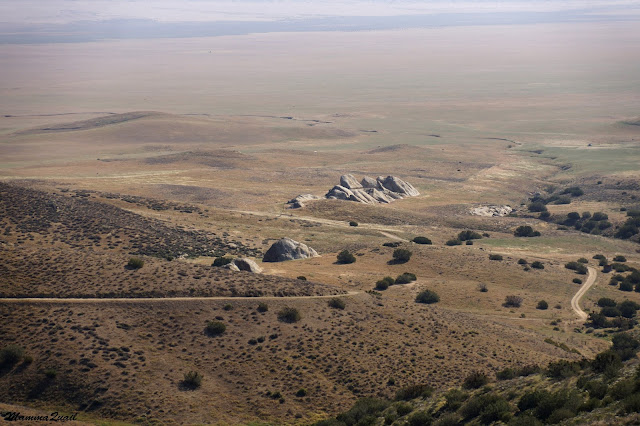 I wasn't expecting any wildflowers spectacle. Certainly not after having been told on the phone by the field office person that it was a very week winter there and whatever was blooming had peaked a month before our arrival there.
Still, I could see some colors right away.
Most conspicuous of course were the red Indian Paintbrush shrubs.
But there were others. Turns out that there were plenty others. Many of which I had never seen before. Some can only be seen around that region.
Wherever there are flowers there would be their pollinators. Bees are so much part of our environment, and so great is our modern agriculture dependent on honey bees, that it is easy to think that they were always part of California. I was surprised to learn that this is not the case: the familiar honey bee immigrated to California with the Europeans.
All species of California native bees are solitary. While I do not have the knowledge of which species is the one in the photo below, I can tell for certain that it is not a honey bee.
At first the trail separates from the dirt road and takes off into the chaparral. It was a warm day, but very windy. 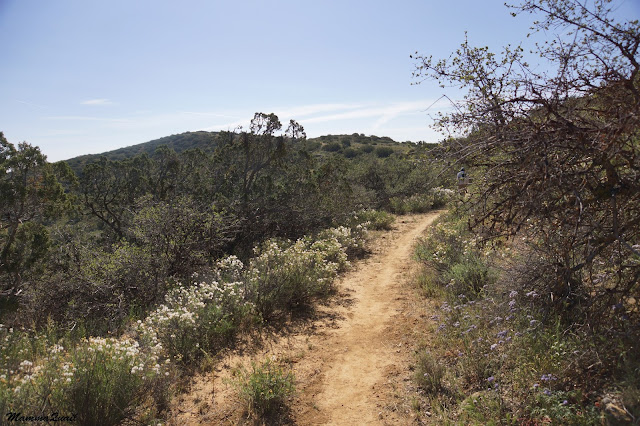 It got more and more windy as we hiked. That posed quite a challenge on getting my photography objects in focus. I ended up using the10-shots series mode, hoping that at least one will turn out ok. That turned out to be a very good strategy, thanks to digital photography!
The narrow trail rejoins the dirt road fairly quickly. We continued south on the mild uphill slope, exploring the interesting terrain.
At some point I diverted from the main trail and there, behind an unpretentious juniper, I saw the tall stalks of a white larkspur of a species I haven't seen before. I was so excited that I stayed there for a long while, photographing the plant from every possible direction.
Another exciting find appeared in a much more modest suit - the tiny Veatch's Blazingstar. In fact, unlike the larkspur, I was not aware of how exciting that sighting was until I was back home, analyzing the photos.
And wherever there are flowers, there would be pollinators. Butterflies fluttered about throughout our hike. Sometimes they even stayed put long enough to be photographed.
There were birds about, too. Most of them far away, and constantly on the move. Papa Quail is blessed with a lot of patience, however, and managed to document a few feathered friends.
The chikas called me, all excited. They had found a baby dragon!  I rushed over and looked where they were pointing at. I looked hard for a long while and saw nothing.
Then it moved. Just slightly, but suddenly I saw it. A dragon-like lizard that for some reason was named a horned toad. So perfectly camouflaged it was.
Looking at the ground became a necessity as the sun rose higher and shone brighter. From the ground little yellow flowers were shining right back at the sun.
I saw two species of primrose there, one of which was the tiny, fittingly named suncup.

We were headed toward Caliente Mountain. It looked high and far but the we were going at a good pace, despite the frequent breaks we took.
The photo above shows a somewhat dull scenery, showing nothing of the colorful tiny flowers that bloomed all along the trail. To see those, a much closer view was needed.

Perhaps the most common of those tiny flowers was the 'Bird's Eye' Gilia. Not carpets, perhaps, but certainly rugs and rugs of it.
In quantity, the bird's eye gilia was rivaled only by the linanthus, another tinsy-flowered plant that seemed to be all over the place.
In more than one species. Between them, these three small-flowered, toe-high plants gave the path a festive-spring-like look.
Every now and then I lifted my eyes from the ground and gazed down to Carrizo Plain. The flat floor of the dry basin was etched by the creek coming down from the Caliente Ridge. To see it flow I'll have to return during the rainy season. The season that somehow had skipped that region for two years now.
All rainfall within the basin of Carrizo Plain collects into a soda lake where it eventually evaporates, leaving behind white, alkali sediment. On our previous visit to Soda Lake there was some water there still. On this visit, we saw none.
Arriving at Caliente Mountain, Papa Quail and the chikas flopped on the ground and lay there, all sprawled, for a nap. I sat there too for some time, but them I got bored with sitting and took a stroll to look around.  And sure enough, there was a lot there to see.
Chia seeds have been staple food for the native Californians and is now considered a super food, good for the health. I must admit that my body doesn't agree well with the chia seeds. I do, however, like very much the looks of this small and unassuming sage species.
Shrubs of buckwheat are common there, but their bloom seas only in its beginning: pretty, red inflorescence buds sticking out of gray, leafy fusions.
And more butterflies, flying here and there, pollinating whatever is in bloom.
The chikas didn't nap. Instead, they found amusement in tickling their father so he couldn't nap either. Eventually they had enough of tickling and got to their feet. It was time to resume our hike: to go down along the ridge, back the trail we hiked up on.
Once again we run into a horned toad lizard. This time it was out in the open, easy to see and to photograph.
Other, more familiar and ordinary-looking lizards were also present up on the ridge. They didn't rely on camouflage alone, but dashed away whenever we approached. Except the one below who stopped for a moment at the mouth of its hole.
I was paying as much attention to the plowers on the way back as I did on our way up. I was content to stop and inspect closer every colorful spot along the trail. Even if it looked very familiar.
Often enough the plants were unfamiliar to me. Sometime it was hard even to narrow it down to the family. Perhaps if I had the patience to inspect more closely in real time I might have recognized this one to be in the mint family. It was, however, a surprise left to be discovered at home when looking at the photos.  In any case, I had not the knowledge to tell that this mint species I was looking at is on the California Native Plants Society list of rare and endangered species.
Looking up and away on the other, eastern side of the plain: the even drier Tremblor Range. Just below it - a lower ridge that looks like a dragon's scaly back. That is Elkhorn Ridge that marks the San Andreas Fault. 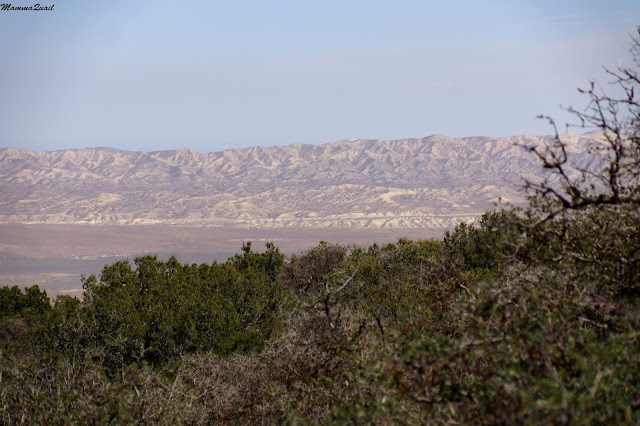 The wind was getting stronger yet. In the heat of the day the wind provided a welcomed relief but down on the plain it was raising up a storm.
Up on the range though, it was still all pretty and flowery. There were many phacelia shrubs, usually hiding under larger, shade-casting bushes.
They too, came in more than one species.
The rolling fiddle-neck shape of phacelia inflorescences also gave their relative - the fiddelneck - its name. Fiddleneck species are quite common, but not every day I get to see when it is visited by an orangetip butterfly.
Making our way slowly down the crest of Caliente Ridge, the chikas were getting impatient and were ready to go to the campground and call it the day. 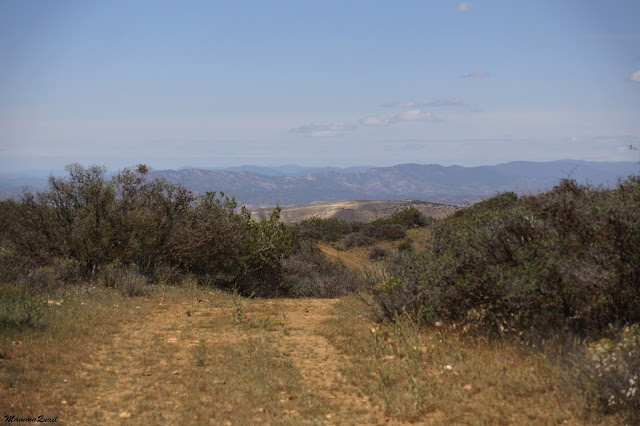 To to get it wrong - they did have a lot of fun on the hike. But the flowers interested them only so much. Even those named after animals.
But hikes always gets more interesting with direct interaction with the wildlife. Even insect wildlife. Especially the kind one normally hears but doesn't get to see all too often. Like this humble cricket that my elder chika found.
By the time we arrived back at the car the wind was strong indeed. We quickly huddled inside and drove off to the campground, leaving behind the wind poppies to sway under the junipers.
At the campground we prepared for a gale. We fastened our tent and opened the pop-up canopy just to be able to cook dinner. Around the campground other tents were blowing, a couple got detached and flew some distance before being caught and re-staked to the ground. All night the wind blew noisily and by morning we found that many campers had spent the night in their cars or fled altogether.
The morning air was still. all the wind had blew away and now we were already missing it. We broke camp and drove to our next destination at Carrizo Plain NM: Wallace Creek and the San Andreas Fault.


Many thanks to members of the California Native Plants Society for their help in identifying flowers!
Thank you too, anonymous commenter, for correcting the lizard ID!