Taking the Long Way: From Old Pinnacles to Balconies

Dates: April 8 and 14
Place: Pinnacles National Park, Paicines, California
Coordinates: 36.494948, -121.172994
Length: 5.2 miles
Difficulty: moderate (passing through the cave requires flashlights and can be challenging to some)

Spring time is the optimal season to visit the Pinnacles National Park, and last spring I was fortunate to visit there several times. On two of these visits I hiked the trail from Old Pinnacles Road at the east side of the park to the Balconies Cave (and back). On the first hike I was on my own. A week later I was there with a group of families. On both hikes I had a superb time and the photos in this post are from both dates.

After our untimely return from our 2015 spring break vacation Papa Quail decided to stay at home with the chikas and sent me off on my own to complete my vacation elsewhere. After been there on the previous day, I chose to go back to the Pinnacles National Park and get properly immersed in its Nature before taking my hiking group there on the following week.
It was already afternoon when I arrived at the park and it took me some time to find a campsite - there were only a few vacant ones left. So by the time I started my hike the shadows were already getting long.
The entire hike is inside the Chalone Creek. The trailhead is at Old Pinnacles Road and has limited parking and no water or toilets except for a single porta-potty, so it is best to get ready in the Visitor Center area and arrive early enough at the trailhead to find a parking spot.
The trail itself is easy to walk. Wide, clear, and only mildly sloping as it gets nearer the Balconies. All along, the trail is within the Chalone Creek. Wide and sunny at first, the open creek bed is lined with riparian vegetation, including large oaks and pines. Wildflowers were everywhere along the path, unaware that the spring bloom had supposedly peaked a month ago.
Before long the creek narrowed and I was walking in a deep gorge lined with steep rocky slopes that were covered with moss and lichen and patched with wildflowers. 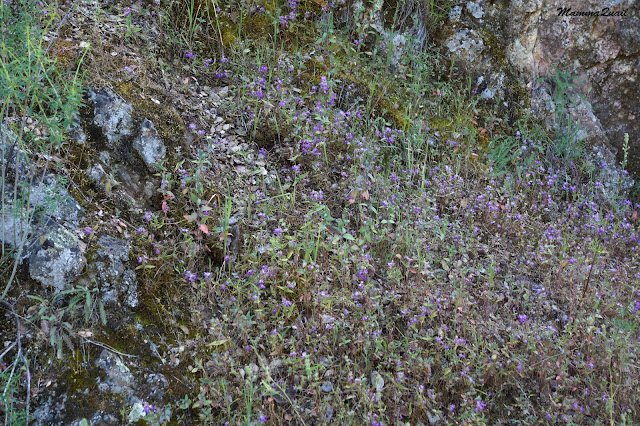 Trees lined along the creek, casting cool shade on me and on the herbaceous vegetation below. In a hot Pinnacles day, the shade was a blessed thing.

Not only flowers - there were many butterflies about. While I didn't get any gd butterfly photo, I did manage to photograph their much slower offspring: 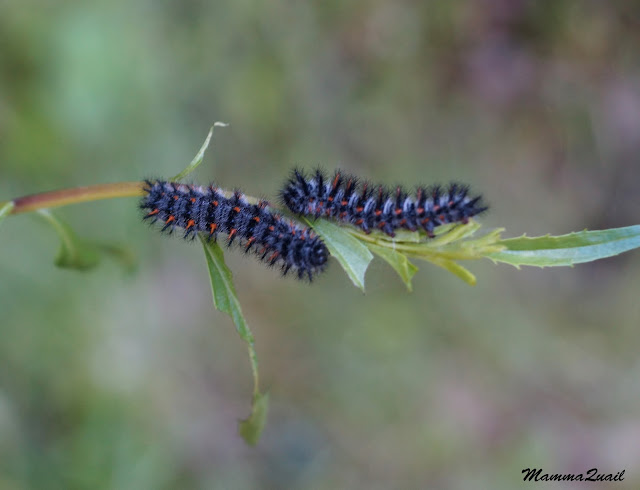 Chalone Creek was flowing still. Not much, but enough to enliven the scenery. Where the trail crossed the creek I stopped to inspect the vegetation. 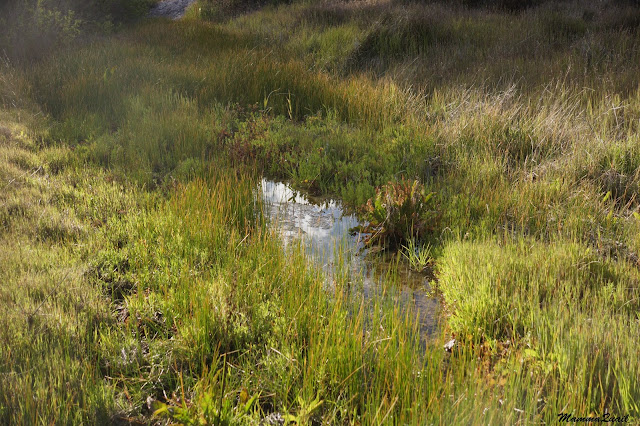 A common find near running water: the yellow monkeyflower. There  were a few of them right there, by the water.
Another nearby little yellow flower: a violet. There are quite a few yellow violets in California and at the Pinnacles. They look similar enough to one-another so I cannot tell the species of the one posted here by looking at six-months old photos.
Other flowers I saw there were much easier to identify.
About mid way to the Balconies, the trail comes under full sun for a while. There I found more chaparral-like vegetation, including the familiar Indian Paintbrush.
That yellow, stringy stuff surrounding the indian paintbrush is a dodder plant - a parasitic, non-photosynthethic plant that sucks the life out of other plants. I saw a lot of dodder in the past year and I was sad to see it at the Pinnacles too. Part of Nature's cycle, I know, but also indicative of the environmental stress there.
Many lizards were sunbathing on rocks. They didn't even bother to skedaddle as I walked by. Here is one of them:
Crossing the creek again I came by a patch of white-flowering lupine. There are a few species of lupine with white bloom, but none of them listed in the Pinnacles area. There are also albino versions of normally blue species. As I am not sure which is this one, I leave it unnamed.
I continued with the trail, again under the shade. Mostly. Large volcanic rocks towering above the creek marked my nearing the Balconies. 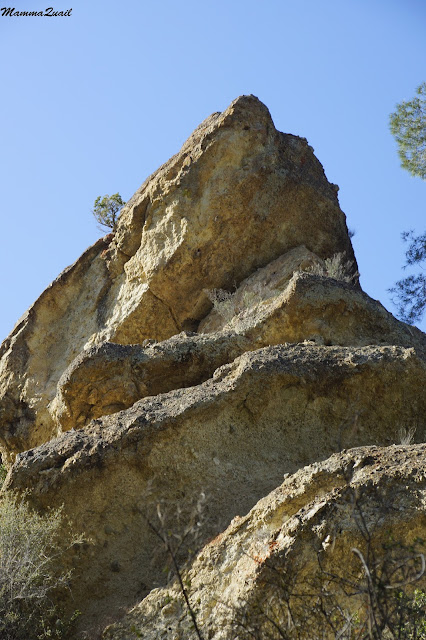 And below: more flowers. Some I had not yet seen on the eastern side of the trail. Like this Golden Brodiaea.
Or its relative - the Mexicali Onion.
Another familiar one - the common yarrow - I've seen it all along the trail. It was in full bloom and looked very inviting. For pollinators too.
The rocky towers became larger and more distinct. I was getting very close now. As I often do (and by far not the first one to do so) I saw shapes in the rocks.

And all of a sudden, I found myself in familiar settings: the eastern intersection of the Balconies Loop Trail.
The Balconies are most commonly accessible from the west side of the Pinnacles. The place I was at usually the half-way point. This time I was doing it the other way around.
On my former post about the Balconies Loop I showed a photo of fruiting clematis glowing in the sun. The clematis was there last April, too. The same plant. Now in bloom :-)
There is a low stone retaining wall there, right where the trail splits. That's a perfect spot to sit and relax before going on.
Then it was time to plunge into the cave.
The caves at the Pinnacles NP are talus caves. That is, caves formed boulders fell atop the narrow gorge, thus creating a ceiling. There are two such caves in the park, one in the Bear Gulch area, and the other is at the Balconies, and the Chalone Creek runs through it. The Balconies Cave is the more challenging of the two, requiring some good rock scrambling in the dark. A good flashlight is necessary, a head lamp strongly recommended. At some points it would be good to take the backpack off in order to squeeze through. Babies should be held in a front pack or on hand and not on a back carrier.
The cave is gated on both ends. Seasonally, the cave will be closed to allow migratory bats some peace and quiet in there. On April it was open and the gate was open.
And in the corner of the gate - a bird's nest. The nest's owner wasn't there. A pigeon, perhaps? 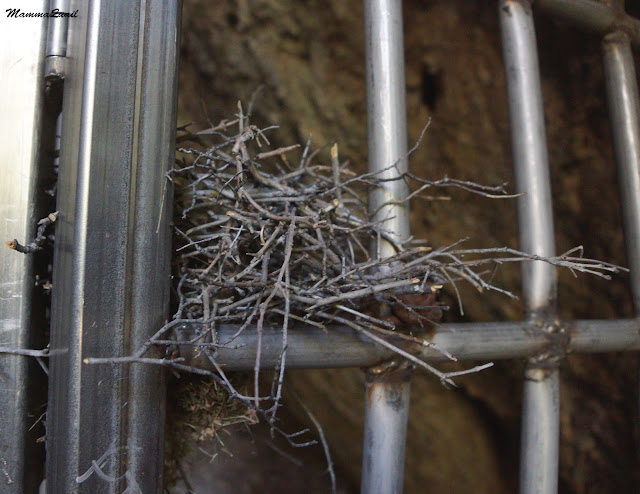 There were some recent rains before I was there and the cave was all wet at the bottom, and dripping from the top in some places. Not that I needed the camera there, but I still had to shove it inside my short to protect it from the water.
A week later, when I was there with my group, the dripping had stopped almost completely, leaving only wet patches on the cave walls and puddles where the creek flowed.
Outside the cave on the west end the canyon walls stretched on, endowing deep, cool shade that was completed by the trees on the other side. 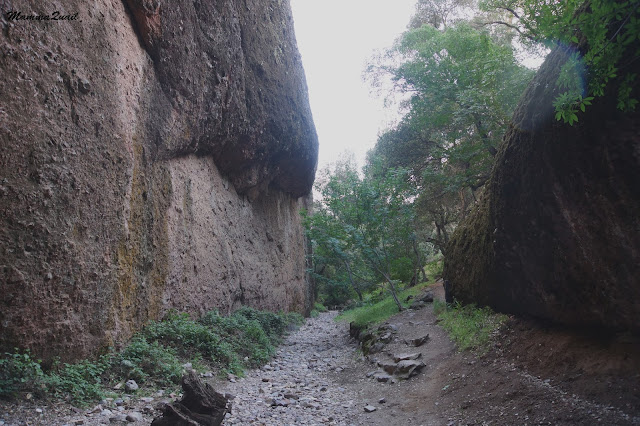 Oaks, pines, and also California buckeye that was just starting to bud out its candle-like inflorescence.
Below: shade-loving wildflowers. The elegant-looking hedgenettle and the very common blue fiesta that carpeted the small alluvium slopes at the rock base.
The blue Fiesta was so prevalent that I was sure it was an invasive species. It is California-native, however. A very pretty one with a (relatively) short season.


Shortly beyond the cave's west opening there is the west intersection with the Balconies trail. This time I didn't stop for a rest: it was already getting late. So immediately I begun to ascend the switch-backing trail uphill, stopping only occasionally to photograph the upper rock vegetation.
The Balconies, like the rest of the Pinnacles famous rock formations, are the remains of an eroded old volcano. The layers and conglomerates of volcanic ash and stones present a colorful and very impressive backdrop for the area's living Nature. Like the tall pine trees, for example.
The vertical creases that run from top to bottom were cut by water running down the rock face. I wish to see them running in person one of these days!
The trail doesn't go all the way to the top rocks. After a short ascend, the trail levels out at the base of the Balconies rock. There, vegetation is chaparral.
A very common chaparral member is the chamise bush. On April it was blooming, too. A very delicate white bloom, giving the bush an angelic air.
Up on the Balconies there was still plenty of direct sunlight. As spirit-uplifting were the little yellow sun-like composites that were shining back at the sky.
Up there I also got a closer view of some of those giant boulders that covered the creek below. I'm glad I wasn't there when they toppled from the mountain. 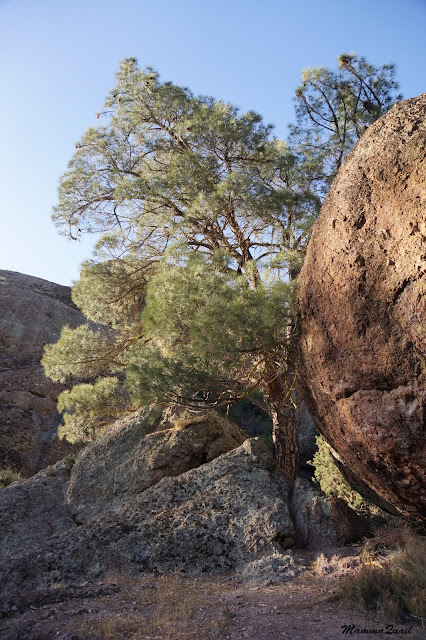 I walked down to the east trail intersection and turned left, heading back to the Old Pinnacles trailhead.
Sunlight was waning fast. In the shaded trail segments it was already getting dark. I increased my pace. On the following week, however, when repeating that same trail with my group, I had more time and much more light to photograph what I had skipped on my solo hike.
And it was also on the latter hike that the kids had found an interesting sight: a pair of beetles celebrating spring. 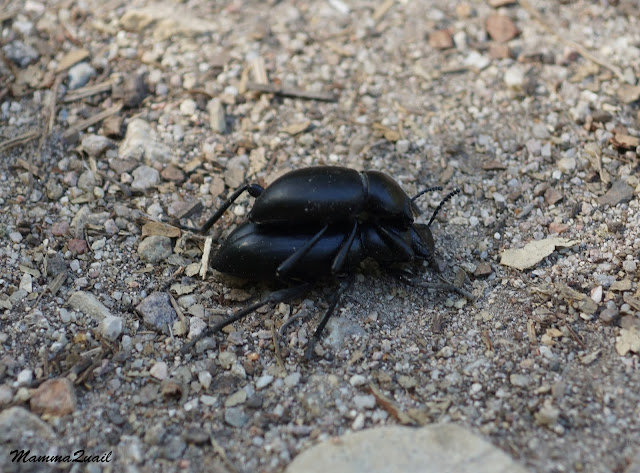 But on my earlier hike there, it was already quite late when I made it back to the Old Pinnacles trailhead. But the Indian tobacco I'd seen there, which was closed when I started my hike, had opened fully. Later that night I saw more tobacco bloom at the campground. Leave smoking associations aside,it is a very beautiful flower indeed.
With just enough daylight left, I made it back to the parking lot and took some time to sit on  large rock and relax before driving off to the campground. The morrow would be a long day: I was planning to go all the way up to the high peaks and I could use a good night sleep.