Second Time and Lots of Charm: Up (and Down) Mount Pinos

Our first attempt to hike up Mt. Pinos was on the 2015 Spring Break, following our visit of Carrizo Plain NM. When we arrived at the parking lot we were met by harsh weather and decided to abort, swinging by the west Pinnacles on the way home.
Last August I had the opportunity to go back to Mt. Pinos, this time without Papa Quail, who was away on separate business. The chikas and I were returning north after visiting friends in Southern California. I planned to cover the distance in two days, one for a hike and the next for the beach. The night between I wanted to camp at the Valle Vista Campground.
Mt. Pinos is 8,848' high and can get a fine winter snow cover that attracts area cross-country skiers. The road pavement up the mountain ends in a base camp parking lot, about 2 miles shy of the summit.
Last April the lot was deserted. When I arrived there on August 14, there were many trailers and RVs parked about in no apparent order, and in between the vehicles stood numerous telescopes of various sizes. That night would be the third in a row that a strong meteor shower was expected.

By the time we arrived at the parking lot of Mt. Pinos, 2 miles shy of the summit, the chikas were in hearing Nature's call quite loudly. The long line of porta-potties that I saw there on April was gone so, ignoring the red patch of scarlet bugle penstemons by the parking lot, I  hurried the chikas down the 200 yards' path to the nearby campground.
I probably wouldn't have mentioned our little restroom diversion if not for two things, one being the nasty litter of human waste around the parking lot (goddamit! the restrooms arejuast 200 yards away! and even if you cannot hold it that far, you shouldn't be leaving it out like that! Bury it and pack out the toilet paper! Yuck!)

The other reason was quite a nice surprise and that was a sole yellow-flowering penstemon that stood out in a field of regular red ones. Because we were in a hurry to get to the campground I took just a quick photograph, hoping to take better shots on our return. Unfortunately on our way back to the parking lot and trailhead I was too busy trying to resolve a conflict between the chikas and missed that unique specimen.
Back at the parking lot we got our backpacks and started up to the summit. The trail is a broad dirt road that's easy to follow all the way up. We went up and down that same trail.
The altitude isn't a problem there and the trail ascends in a mild slope through an open forest of (mostly) pine trees. 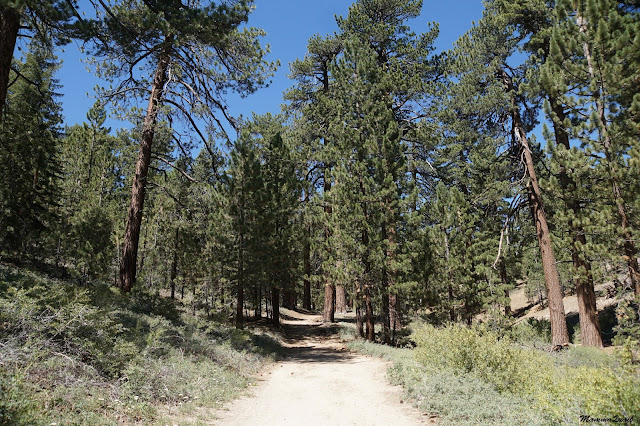 Still, the chikas started complaining almost from the start. We didn't even make it to half a mile before we had to stop for them to rest and snack and for me to breath deeply and say 'ohm' a lot.

A good, natural forest showcases quite a few tree personalities. While oaks are usually more expressive, the pines of Mt. Pinos can be quite wild in appearance too. 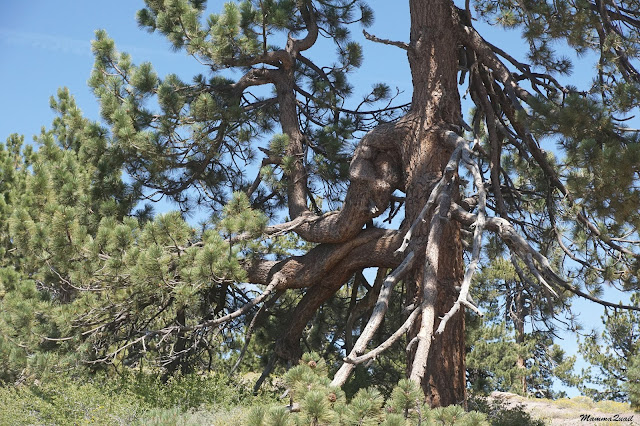 Within a mile the trail leveled almost completely and we walked out of the woods and into a large meadow painted intense yellow with rabbitbrush. 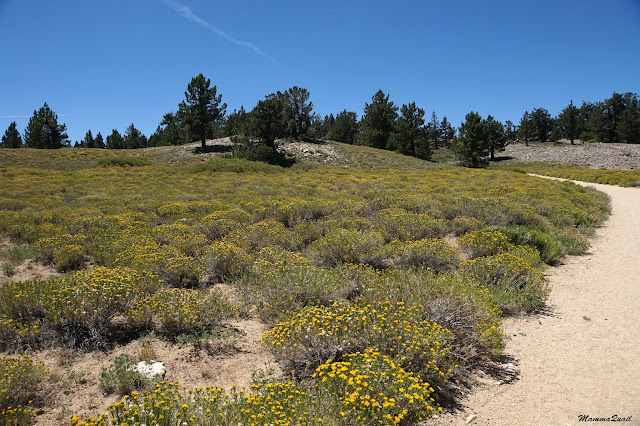 There are several species of rabbitbrush in that area, and I believe I have identified two of them in that meadow. The differences are slight, making it a challenge to tell the species apart.
There were many bees about the rabbitbrush, all of them solitary bees. Younger chika was a bit worried about them, but I reassured here that the bees had no interest in her whatsoever. They were into rabbitbrush, not roses.
We did not see any actual rabbits there, although I'm quite sure they were somewhere around.
Bees weren't the only creatures with interest in rabbitbrush. Elder chika found a big caterpillar chewing on the plant. 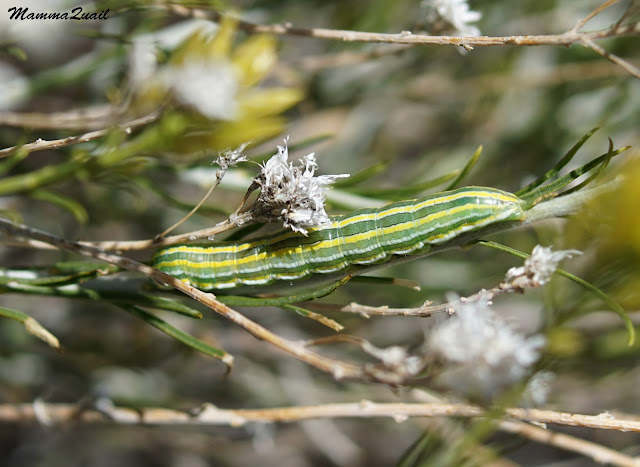 Although the trail was much easier we had slowed down considerably when crossing the meadow. There was so much to see there! Although not as high as the Sierra Neveda, Mt. Pinos is high enough for having an excellent bloom in mid-August.
There were quite a few lupines in that meadow, well spaced between the rabbitbrush. Some of them were already past peak bloom.
And others were still going strong.
A narrow  trail split off the main trail and lead to a nearby hilltop. I beckoned the chiks and we followed the trail to the tip.

While I would have loved to sit there quietly and contemplate, the chikas were restless and after looking around a bit we strolled back to the summit trail and continued up.
Rabbitbrush is a perfect color partner to any other flower color. Every color pairing works with it.
As we went on the chikas started another argument that quickly escalated in tones. I hurried to find a suitable diversion for each of them. Elder chika would have been happy to find me birds to photograph, but none of the happy chirpers in the brush would show themselves so she settled for looking for gems.
We passed another patch of forest and entered a second meadow area, where the plants were much lower, stretched on the ground in flat cushions, as common with Alpine plants.
Even the lupines there were small and flat. In contrast with their lower-altitude relatives, they had just begun blooming.
We were very close to the summit when my elder chika sat down and said she would not go any further.
We sat too. Had a little snack and rested. 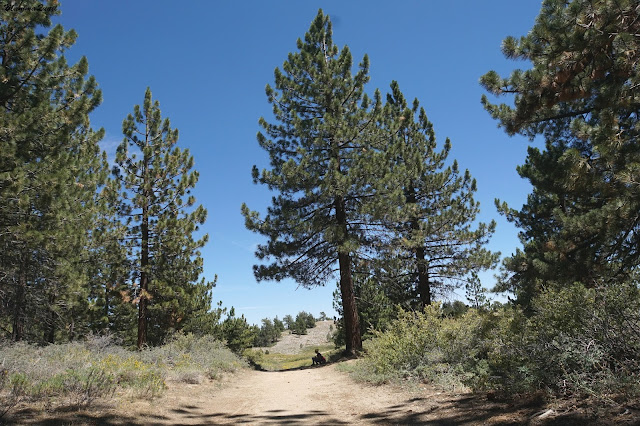 When it was time to go on, she got up and continued without a protest.
At the summit there is a small parking area that looked like it has not been used in a long while. There were also benches and information post signs.
And there was view. Wonderful view.
The chikas slumped on one of the benches while I walked around, reading the signs and enjoying the view.

And there were flowers at the summit, too. A beautiful one that I've seen many of - the delicate prairie flax.
An antenna-bearing second peak, very close in height was just a short distance east of the summit. I prompted the chikas to move and, without staying to listen to their groans, I hurried to that second peak, where I found the view just as appealing (and less so the half-empty beer can that was left there by a previous visitor).
It was all downhill from there. After duly taking our own photos at the summit we started back on the same trail we came up on.
And I was just as attentive to the flowers as I was going up.

It is my habit now to try and document every flower I see on the trail. One never knows which flower will turn out to be an interesting find. Even the simplest-looking flowers may turn out to be unique.
And then, there are those flowers that you know are unique right on the spot. It was only in the way back that I found the flower that made my day: a Mariposa Lily!
With seconds the entire attitude of the chikas changed a 180 degrees and happily, they spotted many more lilies for me to photograph. I couldn't believe that I had missed them on the way up.
We had a much better time coming down the mountain than we had going up. The chikas had ceased their bickering and at last, were engaged in the beautiful Nature that we were walking through.
And so they found the only vertebrate on the trail that was out long enough to get on camera, if only at a distance and in the shade.
Coming down the mountain was (surprise, surprise!) much quicker. But not too quick to pay attention to the interesting-looking trees along the way. Some trees that looked plain on the way up were showing a completely different side of their personality from the other direction. 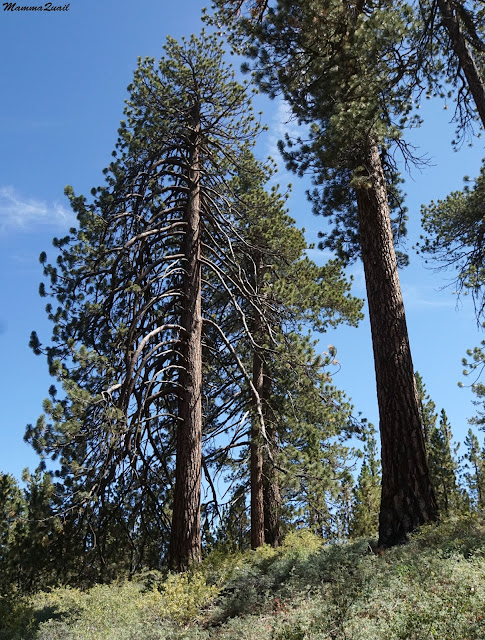 We slowed down again as we approached the base camp. Although eager to get back in the car, the chikas needed some rest (this time for real). That final break allowed me a few minutes more to absorb the mountain forest air.

Back at the parking lot I waved farewell to the stargazers, wishing them good sightings and hoping that they'll bother taking the trail to the campground's restrooms and won't deposit any additional waste near the parking lot. 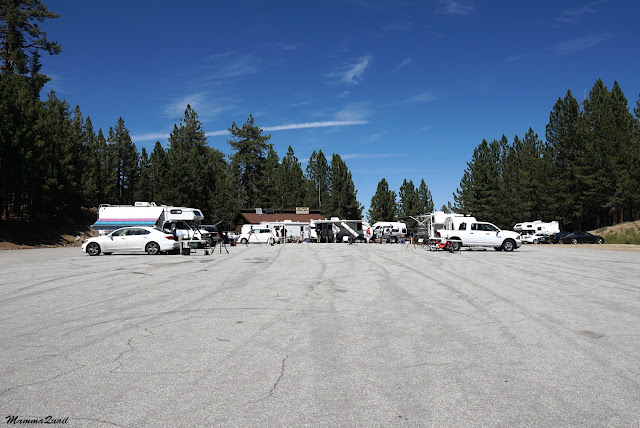 After leaving Mt. Pinos I drove leisurely west to the Valle Vista campground. The view of the valley was stunningly beautiful indeed.
The campground, however, was in a sorry state. The dirt road was all eroded and pot-holed, making it very difficult access to a none 4x4 to get down there. The lower part of the campground was completely inaccessible to us because of the road condition.
The upper part was filthy with trash that was left behind by people with absolutely no regard of Nature whatsoever. And when we did manage to find a side that was sort of acceptable, we discovered it was already occupied by a multitude of fire ants. So after taking a few photos of the beautiful valley we went back into the car and continued on westward, hoping to find another campground.
The next campground we found, at Aliso Canyon, looked much more promising. It is quite desolate, and when we were there it looked cleaner. I already pulled the tent from its case when some of the other campers pulled out a rifle and started shooting  at something. I hurriedly stuffed the chikas and the tent into the car and took to the road again. By then it was too late to find another campground. We crashed in a hotel room in Santa Maria.
The following day we had a fantastic time at Oso Flaco State Park and Beach that completely eliminated all the bad taste that was left from our failed camping attempts.