I planned a special surprise for Papa Quail's birthday. I convinced him to take a day off from work, arranged with the babysitter to pick up the chikas from school, and I took him to the redwoods. The surprise was a canopy zipline tour in Mt. Hermon but we arrived there nearly 2 hours early so we went hiking in the nearby Henry Cowell Redwoods State Park.
I visit this park frequently enough, but nearly always I hike in the old growth area near the main park's entrance. This time we went to the campground on the east side of the park and hiked the lovely Pine Trail that goes in a wide loop around the campground.
We parked near the campground's entrance booth and immediately plunged into the woods. Redwoods are not the prevalent tree species on that side of the park. Much more common are the oaks. Most common oaks there are the live oaks but valley oaks are quite common there s well. I saw quite a few nice, large valley oaks with distinct personalities that had me stand still and gape. Some of them even fit in my camera frame.
Some segments of the trail were completely roofed with oaks boughs, transforming it into a living tunnel. 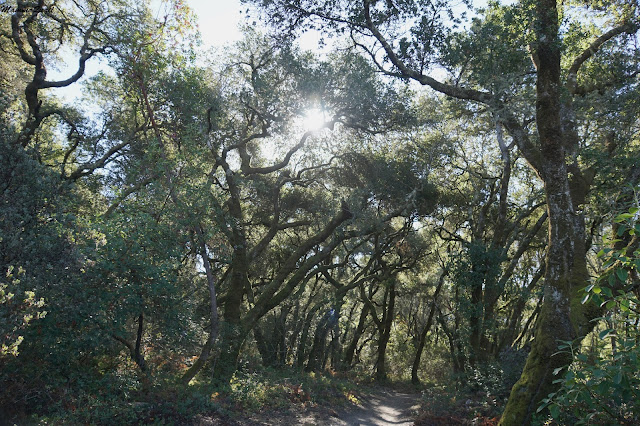 As we curved around and started going south the trail broke out of the trees and into chaparral. The soil in that area is sand and the vegetation is very different than at the west side of the park. 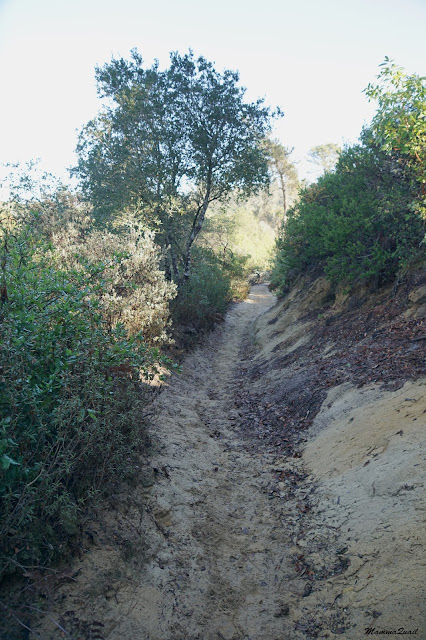 Common chaparral member in that area are manzanita bushes. I always love to see their deep red branches. On this hike they also glistened with morning dew, still hanging on the bark even so late in the morning. 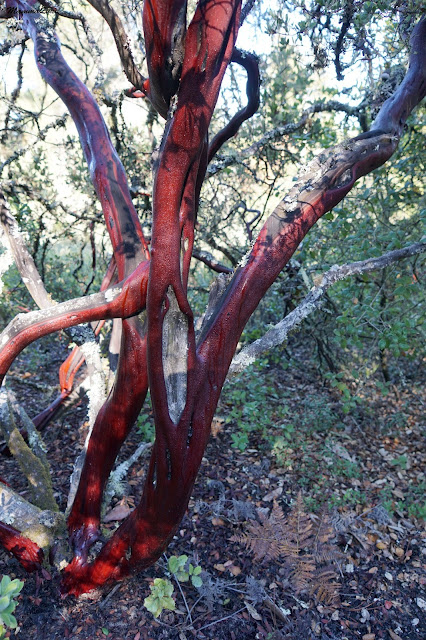 We heard the knocking of woodpeckers. Not surprising, the most common woodpecker there is the acorn woodpecker.
But Papa Quail kept his ears open and soon spotted a hummingbird who drew attention to himself with his high-pitched buzz-like call .
It was a bright, crispy-cool morning. I didn't notice any insects around. Papa Quail, however, noticed a dead leaf that was flying about in a non-dead leaf fashion. When that 'leaf' came to a rest it was nearly invisible - it's camouflage was so effective! Only by seeing where it had landed Papa Quail could tell where it was. And only in the enlarged photo I could tell it was a butterfly. 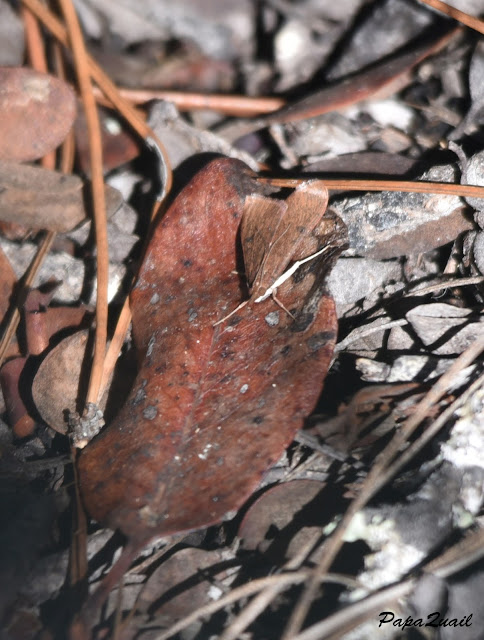 We continued on. While our trail was in chaparral, the valley below us was fully forested. A multi-level forest of oaks and Douglas fir. And then, the bright red fruit-laiden Pacific madrone. 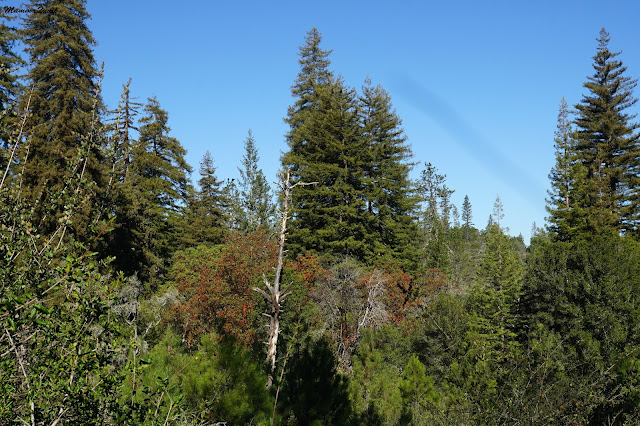 From the campground the trail mildly slopes up towards an observation deck that's up on the hill. Up near the observation deck the chaparral subsides and spaced, knee-high shrubbery takes its place. One of the shrub species is the silver bush lupine, pretty with its palm-like leaves even without blossoms.
The observation deck provides a great panoramic view all around. We stayed there for some time, looking in all directions, appreciating the views and looking for birds. 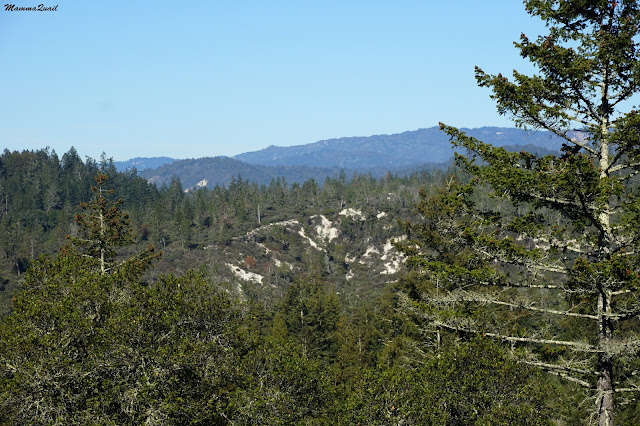 It is up there on the hill that the pine trees after which the trail is named are most prominent. There too it is apparent that pines can have an attitude as well :-)
I would never have seen it. Papa Quail, however, has hawk's eyes. He pointed at a bare tree and informed me that one of the branch tips was, in fact, a bird. A cedar waxwing, to be exact. It was quite far but after straining with the binoculars I could see it too.
It's all downhill from the observation deck. We headed down a mildly descending slope southbound, back into the forest.
Not all the conifers up on the hill were pines. Some were Douglas Fir that can be almost as majestic as redwoods. Almost.
We walked briskly, keeping in mind that we had a deadline to meet. Still, there were too many interesting sights along the trail that I could not ignore. Like these galls, for example, which I previously seen on creosote bushes in the Southern California deserts.
Papa Quail too found reasons to stop. We heard bird calls and woodpecker knocks all around us. Sometimes we could see them too.
While Papa Quail had is eyes trained on tree branches I had mine on the ground. Wet with recent rains, a carpet of lush moss covered every square centimeter that wasn't taken by higher plants.
What area that wasn't overgrown with moss was taken over by lichen: a unique alga-fungus symbiotic organism.
We curved with the trail again, heading back north toward the campground and the entrance road. For the first time in that hike we encountered redwood trees. Young and thin they were, but redwood nonetheless. All of the old growth trees in that area were logged during the gold rush and the development that followed.  Except for a small area of old growth trees by the park's main entrance, all the other redwoods in the area are under 100 years old.

Because the redwoods there are so young and do not thoroughly shade the lower forest levels, other trees grow there too. Like the Pacific Madrone, for example.

We were nearing the end of our hike when a large bird flew by Papa Quail, and he followed it. When the bird came to landing Papa Quail uttered a single word, "Pileated," and hurried forward.
My heart skipped a bit. For years we've been trying to see the pileated woodpecker, a magnificent bird that has proved to be very elusive. It isn't common in California, and while I did know that they've been regularly sighted at Henry Cowell Redwoods SP, I have never seen them there.
I hurried after Papa Quail and looked at where he directed his camera. There it was: a male pileated woodpecker, standing high on a large, fruit-bearing madrone, feasting on the sweat, red berries.
Pileated woodpecker is the largest woodpecker in North America. It is the size of a crow. Still, it was quite far, and in between all the little branches, and it was hard to get a good quality photo. But then a wonderful thing happened: the woodpecker flew closer, landed on a tree right by the trail and posed!
There couldn't be a better birthday gift for Papa Quail :-)

Many thanks to members of the California Native Plants Society for their help in identifying the moss!