Finding Refuge at the Hayward Shoreline

Hayward Shoreline is one of the best places in the Bay Area to see wildlife up close. Mostly feathered wildlife, but others as well. Along the 9 miles trail that stretches from the Hayward Shoreline Interpretive Center (HSIC) in the south by CA-92 to the San Leandro Marina in the north there are sloughs, ponds, and restored wetlands and salt marshes that are year-round home to numerous species of local birds and an essential wintering grounds to many more species of migratory birds.
It is also a great recreational trail for hiking and biking, flat and easy, with great bay view and refreshing breeze. 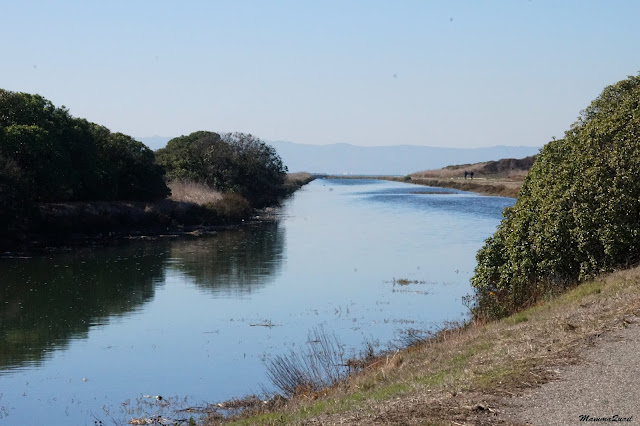 Usually I hike the shoreline from the south and finishing the hike with a visit at the center. The hike I'm posting here is in the middle section of the shoreline, starting and finishing at the Winton Ave. entrance.
The direct path from the parking lot to the bay is along the slough. A few green bushes, but mostly dry weeds separate the trail from the water. On one of these weeds: a black phoebe stands on watch.
Just ahead on the south side of the parking lot there is a low hill where the weeds were mowed short. The tire marks indicate that not all the mowing can be attributed to the geese.
This slough, as well as others in that area, was opened in the 1980's to bring back the tide cycle to the bayshore. This was done as part of the bay wetlands restoration efforts. 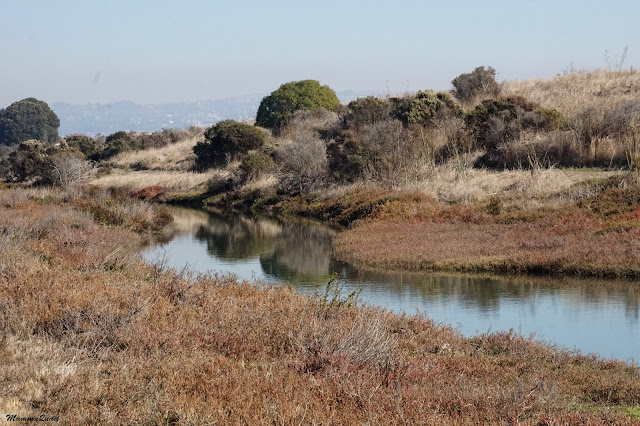 I didn't expect to see any bloom at this time of year, but there was some. The California coastal region never fails :-) 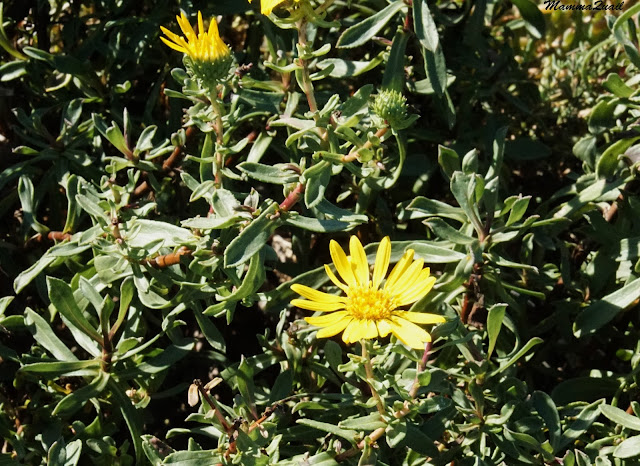 The tidal water flows between the salt marsh sections via a system of sloughs and canals, moving from one to the other through pipe holes like the one at the bottom of this photo: 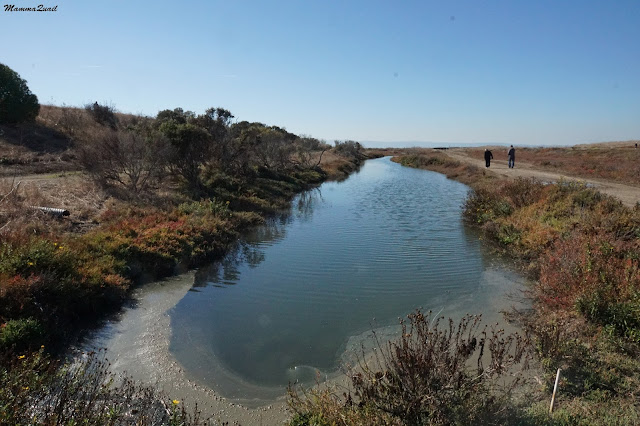 A little whirlpool forms where the incoming tide water flows into the pipe hole. The children watched with intense fascination.
This fascination wasn't experienced only by the kids :-) 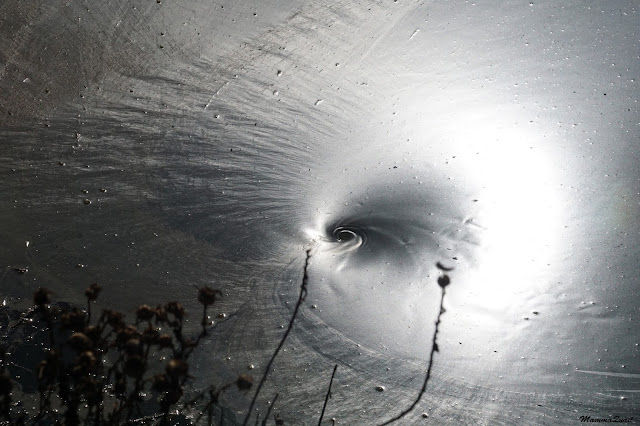 Tidal water regularly floods the salt marsh areas, supporting the specialized plant life and the numerous birds and other wildlife that depends on the tidal cycle.
At the end of that slough there is the bay front. Any day there would be a few anglers standing there with the lines in the water. I was quite horrified to see how trashed that place is. I took some quick photos of the birds roosting on a rock pile off shore and then took off.
I continued south along the waterfront, keeping the low hill to the east on my left and a narrow stretch of salt marsh in between us. 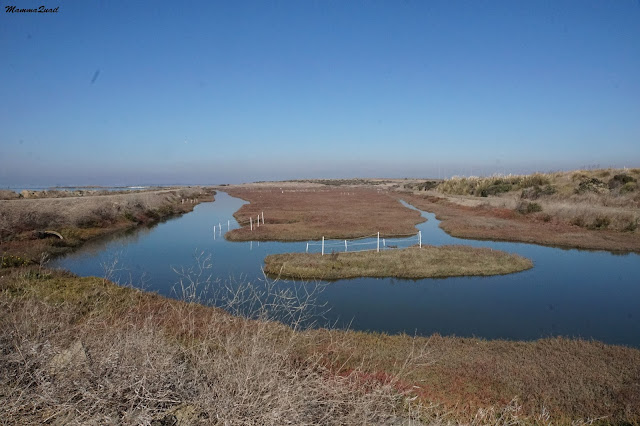 Just before reaching the park's entrance there is a small hill east of the trail and what seems like a vehicle trail that goes up it. I walked up there a little bit before I realized it doesn't really lead anywhere in particular. It did take me, however, close enough to that white spot I saw earlier on the bushes underneath: that was another beautiful raptor: a white-tailed kite.
Coming back down and circling the hill on the official trail I had the strange feeling I was being watched ...
I wonder who they report their human sightings to.

Just before exiting the park I heard a commotion near the slough I started my hike at. Looking there I saw two huge jackrabbit running, one chasing the other. The one that was running away took a dive into the bushes and the other one sat outside and flicked its ears.
Not far from where the jackrabbit a tiny burt was chirping: a male Anna's hummingbird.
I could stand there the whole day long and look at the birds but it was time to leave, and so I left the park and walked past the inner lot to the outer one where I had parked my car. On the way I was stopped by a noisy common raven who had an opinion (on what, I don't know) and stated it loudly.
As a go-away gift from the park: a small bird that's usually difficult to photograph - a ruby-crowned kinglet. It stood still just enough.
The Hayward Shoreline is a very good place for a walk or a bike ride, but it is a fantastic place to go bird watching and to enjoy wildlife. So close to the city it is, yet so rich with natural treasures. Easy, wide trails make it accessible to anyone, just keep in mind that dogs are not allowed in that part of the park, south of the slough where I hiked.