The chikas are off school the entire week of Thanksgiving - perfect time to go on a longer road trip. This year we traveled south, and not just on Nature discovery: we have friends that we wanted to see and also a 2-years old promise to keep. But with and around all that, Nature was still a top priority.
one of the places we visited was the lovely little park of Laguna Niguel Lake. In the town of Laguna Niguel, north of San Juan Capistrano, there is a creek called Sulphur Creek and that creek is dammed to make a small reservoir. That reservoir is a place for boating, fishing and picnics (very nice picnic areas!) and it is also surrounded by an easy and pretty hiking/biking trail, just under 2 miles long.
We arrived at the park at mid-morning and immediately embarked on the trail, not before promising the chikas a mac n' cheese picnic.
The trail goes south on a pavement, cutting through a nice, green lawn that had me raise my brows. I do hope they kept that lawn green with recycled water.
Most of the trees there are introduced species, with Eucalyptus being the dominant in that area. The woodpeckers didn't seem to mind.
Following the offspring's Manual, the chikas started wondering aloud how long and difficult would the hike be. Before I had the time to come up with an appropriate response we were at the lake side and the chikas got distracted and forgot their lines.
A few sleepy ducks on the water swam away as we approached. One stayed behind to make sure we're no trouble.
The pavement ended, but the trail continues on a convenient, packed dirt road. The lake on the right, the hill side on the left, and plenty of sunshine from above. 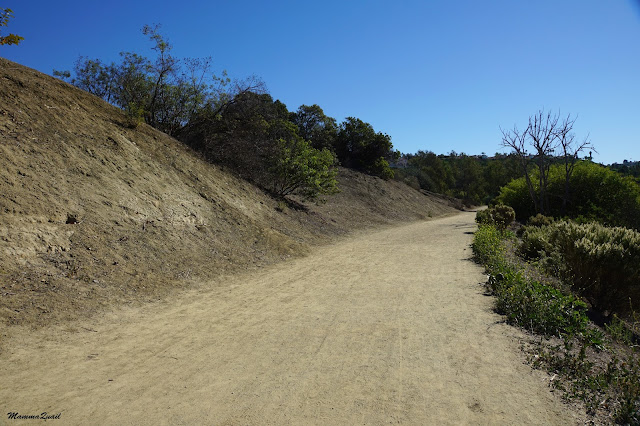 I considered that hill slope foursome time. Behind the hill crest there are houses that are outside the photo frame. Some of the slope is stark - I can almost see the mudslide with the next torrent. Behind - a mishmash of large bushes/small trees from many parts of the world, thrown together to mix withe locals to form a functioning mosaic, home to bush birds, rodents and reptiles. 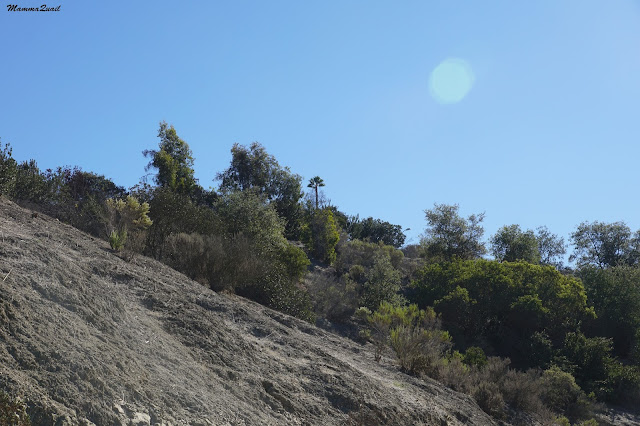 The trail soon delves into the bushes. Of the local residents I noted the two that were blooming like spring. The California Buckwheat:
And the Coyote Brush:
Papa Quail and the elder chika lagged behind. Papa Quail was trying to capture some of those evasive bush birds. Birding sure takes a lot of patience!
I admit that I don't have that much patience. Particularly when younger chika complains aloud that only her sister gets to find cool birds. Then she points at the nearby bush and I quickly click my camera in that direction.
Sometimes it's luck over patience ...
Papa Quail catches up with is. He got tired of waiting for the Little Brown Birds (LBB) to come out and display themselves and settled for a lizard.
The lake was barely visible behind the bushes, but Papa Quail managed to find a gap and photograph the cormorant that was standing there, drying its wings in the sun.
That day the sky was completely clear and blue. Clear of clouds, that is. The raptors circled above head.
When we cleared the bush part of the trail the lake was already behind us and we were walking along Sulphur Creek.  We walked right into the campground area and crossed the creek on the low bridge there, starting our slow return on the northwest side of the loop.
In the creek - a couple of mallards, some coots and a single moorhen. I don't get to see moor hens all that often, but on that trail we saw several. That bird is now called Gallinula (little chicken), but I like Moorhen better.
Shortly we were at the lakeshore again - on the southwestern side. From this point of view the houses on the hill are a visible reminder that we were hiking in the middle of a large urban area. 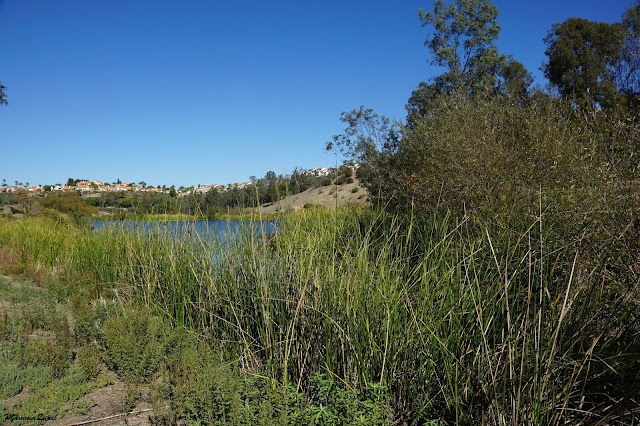 I quickly dropped that thought when I noticed the hummingbird. Papa Quail noticed it too, and we were all standing there for sometime, appreciating this cutie.
Eventually he flew off, but another one made appearance instead:
The western shore of the lake has the boat launch and a long line of picnic tables by the water. The placement of these is perfect for a nice view of the lake and its dwellers. 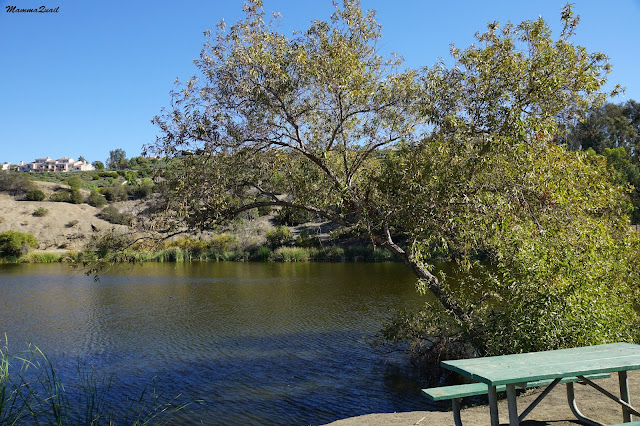 The hill on the western side of the lake was lower and seemed less interesting than the hill on the eastern side of the park. A line of Eucalyptus trees barred the higher landscape from view, but a sole tree in front provided a much more interesting sight: it was full of great-tailed grackles.
While I tried to capture the greater picture Papa Quail, as always, was getting straight to the point.
We continued on. As we approached the eucalyptus trees the chikas noticed a cottontail rabbit. It noticed them too and darted into the trees. Papa Quail tried to get a picture but gave up and moved on. The younger chika followed him, but her older sister was not ready to give up. She has a very sharp eyesight. Promptly, she located the rabbit and pointed it out to me.
I didn't see it. She dieted me again and again, until my eyes finally made out its shape.
The west shore trail is higher than the lake lake water, and the birds on its shore stayed put as we walked above them. There were quite a few of them, too, walking around the shoreline, or sitting in the sun.
A bit of action off shore: a Western Grebe catches lunch.
It was a warm morning and we walked slowly and lazily. I wanted to join the sleepy geese on the shoreline.
I didn't lie down on the shore, but the snowy egret did. I don't think I ever saw an egret lie down like that before.
A group of mallards and coots huddled in the shade of the eucalyptus trees. A large, white bird stood erect at a distance, shaded still: a great egret. 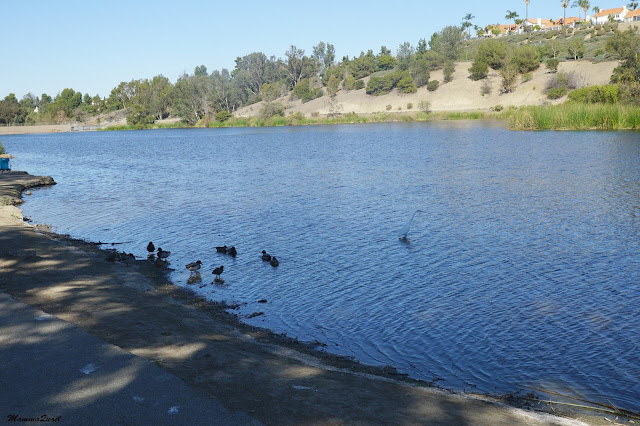 A closer look at the great egret. It's a common enough bird, but I'm always happy to see it.
Even in the shade.
There is a small boat launch area on the west shore and the trail ends there. To complete the loop we had to walk along the paved road.
Before the chikas figured out it was already lunch time we were back on the lawn, walking to the parking lot and the picnic area. We had a relaxed picnic lunch (the chikas got their mac n' cheese) and we moved on south to San Juan Capistrano. 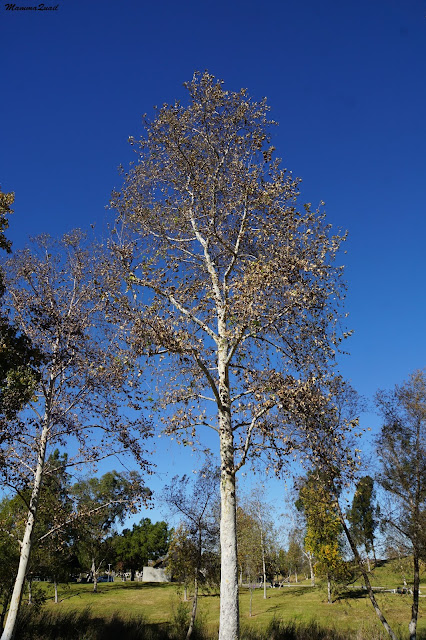 The trail around Laguna Niguel Lake is under 2 miles and easy, comfortable to walk and fully accessible to strollers/wheelchairs. It is the perfect place to stop for a relaxed walk and for bird watching.