I woke up on the final day of my solo prep trip to the Pinnacles with plenty of time before having to go home and no more 'must do' trails. It was a wonderful opportunity to explore the Pinnacles' more peripheral areas. I selected the South Wilderness Trail and after breaking camp I packed everything in the car and drove to the trailhead.
I parked at the Peaks View Picnic Area and looked for the Bench Trail, which connects the parking lot with the South Wilderness Trailehead. I crossed the Chalone Creek back and forth before finding my trail adjacent to the paved road. It was early in April and the creek was already dry.
It was obvious, though, that water was running there not that long ago. Some of that moisture was still under the pebbles and supporting a nice spring bloom right there on the creek bed.
The segment of the Bench Trail connecting the Peaks View area and the South Wilderness Trail is less than a third of a mile. There is much to see on along that short segment, though. Particularly in springtime.
The gray pine is the dominant tree in the Pinnacles NP.  Previous years' cones collect under the trees, adding nice texture to the grassy ground. 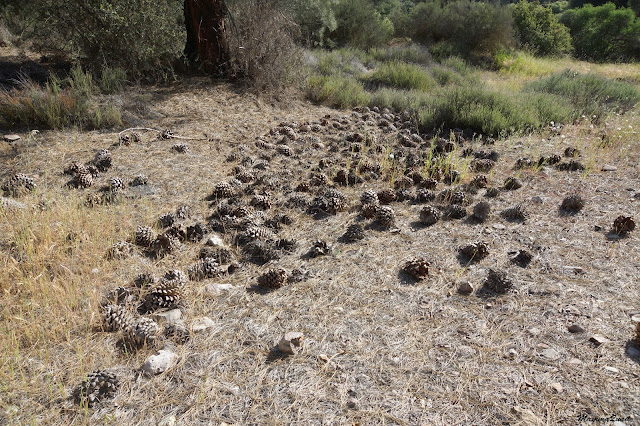 Butterflies were everywhere, enjoying the fantastic bloom in ways more practical than mine. Sometimes they even stood still for a second and posed.
The moon, a waning gibbous, was up. A week later the skies were completely dark and I had the pleasure of sharing my fascination with the stars and constellations with my hiking group. 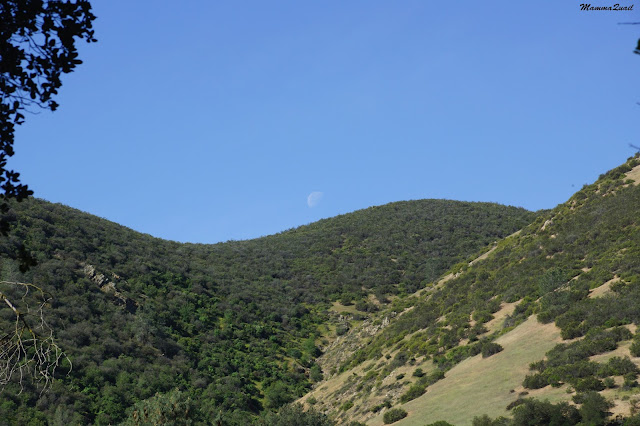 A cluster of scarlet buglers grows by the intersection with the South Wilderness Trail. These common penstemons were just beginning their spring bloom.
I started down the South Wilderness Trail only to stop after a few yards to appreciate the massive oak trees that grow from the valley floor. They were all shining with new spring foliage and glowed in the bright sunlight.
The bright sun was very potent that day. It soon got very hot and I was hopping from one shady spot to another, thanking the trees that cast them. In between shades - bushes of silver lupines and patches of California poppies.
And suddenly - a creek.  Grassy Canyon. And it was running yet, and there were tadpoles in the stream.
There is no bridge there, but the creek is narrow enough to jump across.
I continued south, going in and out of tree groves. Relishing the shade, enjoying the bright light. A lot of hyperactive butterflies flying around me.
The hot sun brought the lizards out. There was a lizard on every rock, literally. The one in the photo below did a few warning push ups before slinking off to the other side of the log.
And more butterflies. Many, many more butterflies.
The South Wilderness Trail goes along the Grassy Canyon. The vegetation there - riparian. Meaning the densest and tallest grow by the creek itself, where water is not as limiting as on the slopes. 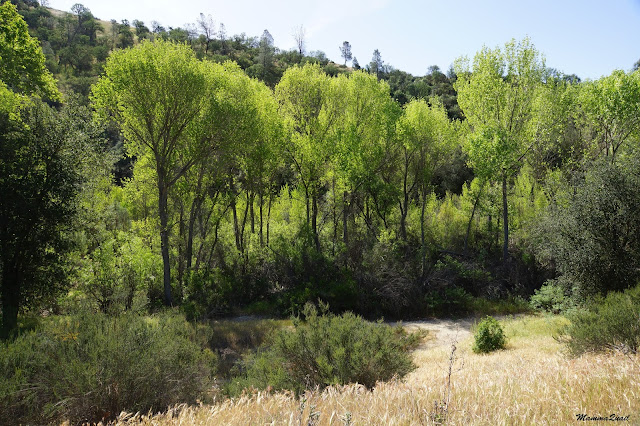 The day grew hotter by the minute. As I progressed south the trees seemed fewer too. The air shimmered in the heat and I dripped sweat on the trail. The golden California Poppies looked like little flames burning on their narrow stems.
Hot and getting hotter. April is a busy month at the Pinnacles, but there was no evidence of that on the South Wilderness Trail. I saw no one else on that trail. It was just me and the flutter-by butterflies. And ants to. Many ants.
And lots of pretty wildflowers.
I was getting closer to the end of the trail. Having walked ceaselessly for two hours I was ready to take a break and I planned to do so at the turn-around point.
The trail curved into the creek bed and disappeared. It wasn't the end, I was pretty sure about it. Not year, anyway.
The creek is wide but the running water was confined to a narrow strip. I kept walking south on the dry pebbles that made most of the creek's width. Soon I saw three rocks piled on top of each other. And further down - another such pillar. Someone had marked the trail. I followed the rock signs until I picked the regular trail again, a bit further south.
One more curve. The trail cut across on the hillside and all of a sudden I was approaching a fence and a sign marking the boundary of the park.
I reached the end of the trail and the turn-around point. I was hot and dripping sweat. I found a large oak with a low-hanging branch and sat down to rest and eat.
I was completely alone. There was no sign or sound of any other humans in that area so I allowed myself a privilege usually kept for males and let the light breeze on my skin. 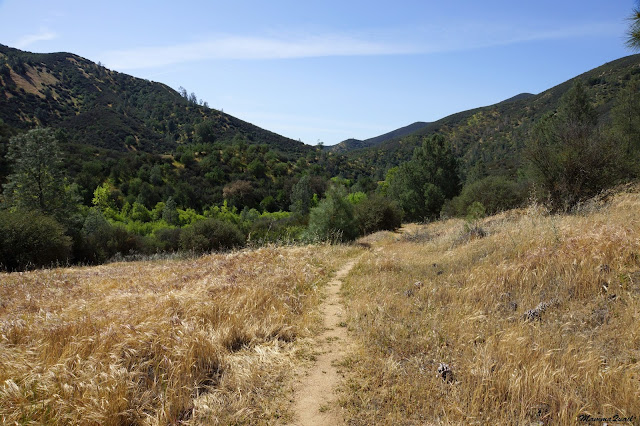 I wanted was to lie down and take a nap but I needed to start going back. I got to my feet and slung the backpack on my shoulders and started north on the same trail I arrived by.
I walked more briskly, not stopping as frequently as I did on the way south. Some sights, however, become apparent only when seen from the opposite direction.
About half way back I was walking on an open stretch of the trail when two hikers emerge from around the curve ahead of me. In a flash I spun around and reverted back to the Clark Kent mode. I turned around in time to smile at the hikers. They were an elderly couple and they were smiling politely back at me. We engaged in a pleasant chat that involved exchanging trail experiences and interesting wildlife encounters, and then we went on our separate ways: they south and me north.
I remained decent for the rest of the hike.
I didn't see any more people until I had reached the Bench Trail again. Butterflies, however, were still in abundance.
I needed to be home in time to take the elder chika someplace and I dreaded having to cross San Jose in rush hour, so I picked up my pace.
I didn't want to stop for anything, anymore, but I cannot resist a pretty flower.
Still, I made it back on time to the Peaks View Picnic Area, and even had a few minutes to spare just for sitting down and relaxing before taking off to the road back home.