A Refreshing Walk at the Audubon Kern River Preserve

Last spring came early to the California deserts and the bloom was strong and spectacular. After visiting the big desert bloom in Death Valley last February we decided to return via Hwy 178 that passes the mountains by Lake Isabella and along the Kern River. It is a very beautiful drive, but a slow one - the road is narrow and winding, and had only one lane for each direction. And past the mountain pass there would be the long hours of driving through the Central Valley. In short, we were looking for a place to stop and do a little hike and a lunch picnic. The place that called us from the map was the Audubon Kern River Preserve - a small nature area between the road and the river.

We found the place and parked on the gravel lot that was already green with grass sprouts. A few shaggy building stood next to the parking lot but they were close and empty. The owner of the only other car in the lot was nowhere to be seen.
We started with the picnic, then took our cameras and binoculars and went out to explore.
One of the buildings serves as a nature center - at another time of the year. Next to it was a large sign post with a trail map and a list of birds that can be seen in the area. Hanging from the building awning was a bird feeder, and it wasn't lonely.
We didn't olan on a long hike, and the short trail of the Audubion Kern River Preserve fit our purpose perfectly. We had no map with us, but the description posted on the sign by the nature center. And the trail was well trodden and easy to recognize.
In mid-February the place was just beginning to show signs of spring. The trees and other perennial vegetation were still in deep hibernation but the ground was covered with green sprouts. Small green sprouts. 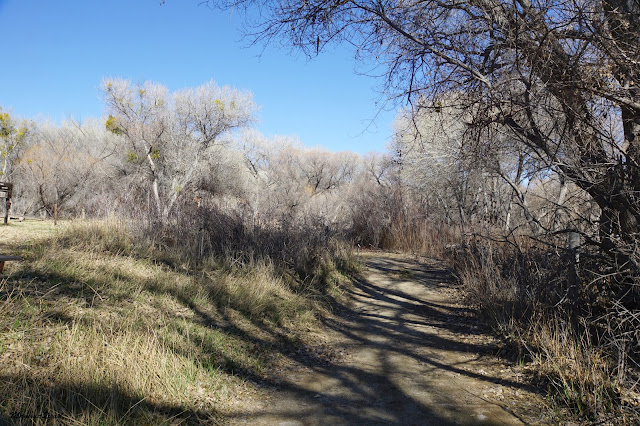 While the only green seen atop the tree canopies was that of the mistletoe, hanging in bright balls off the bare branches. 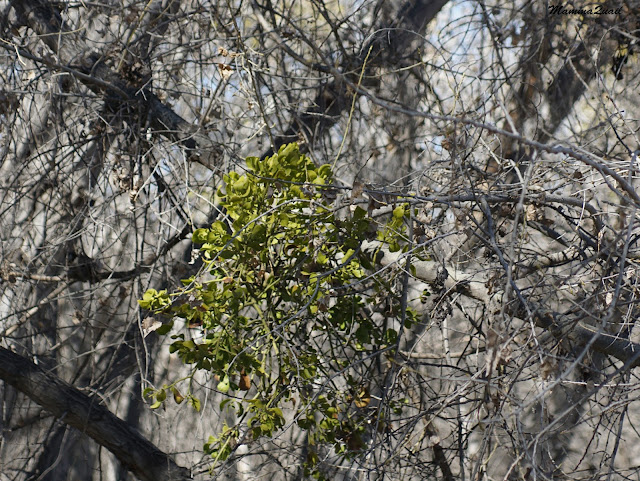 Unlike the trees, the birds were already in the full swing of spring activities. The air was filled with song and little birds were hopping in and out of the trees and bushes. Most of them were sparrows and finches, but there were lots of bluebirds too.
While there were many birds active about, there were very few species of birds, and all that we saw were very common ones, common also in the Bay Area. Still, we were happy to see and hear them. The walked swiftly through the loop trail. Other than bare trees, little birds and lots of fresh sprouts there was very little else to see. Still, the dormant trees were very beautiful, and it was a sunny, beautiful day. 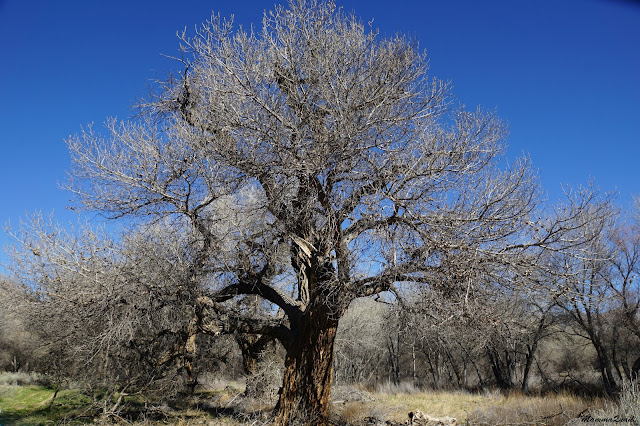 The air was a pleasure to breathe, cool and pure. Visibility too, was good. We had a good view of the surrounding peaks whenever we came upon a gap in the trees. 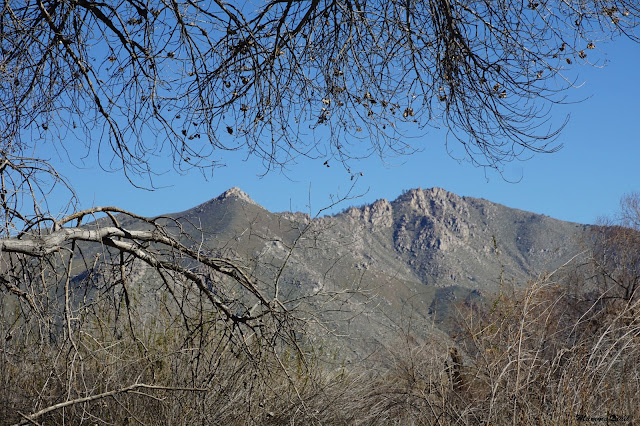 A small herd of deer sneaked between the trees. They were the only non-bird we saw on that hike. The deer were too shy and kept to the vegetation, and would not pose for photos.
The mountains did pose. I wonder if there's any other hiking trails in that area. One day I'll find out. 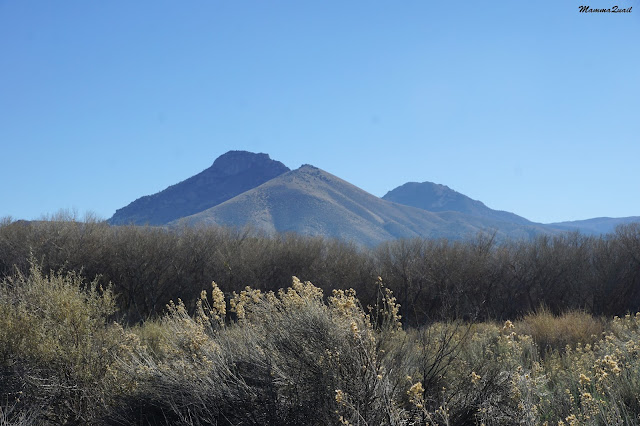 All too soon our little hike was drawing to its end. We completed the loop and walked back on the short trail panhandle back to the parking lot, not having seen any new or exciting bird species, but well refreshed and ready to drive on. 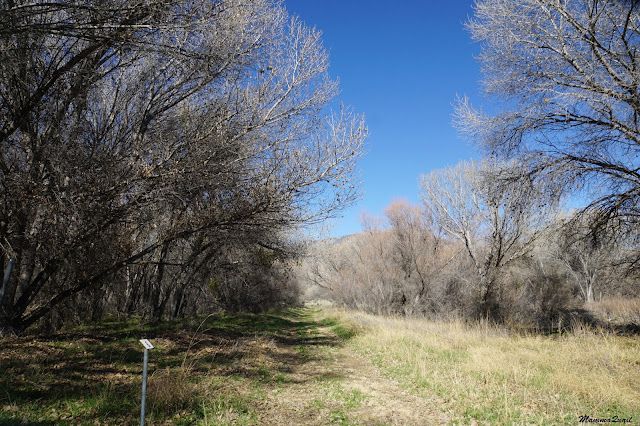 We continued west on Hwy 178 and soon the road delved deep into the Kern Canyon and was winding between the rocky peaks of the southern Sierra Nevada.
Pappa Quail had the wheel on that drive, and soon I urged him to stop the car. It took a bit more driving before he found a safe pull-out, and stopped. I got out, camera in hand: the entire mountain side was green and orange with flowers. It was quite a spectacular sight. 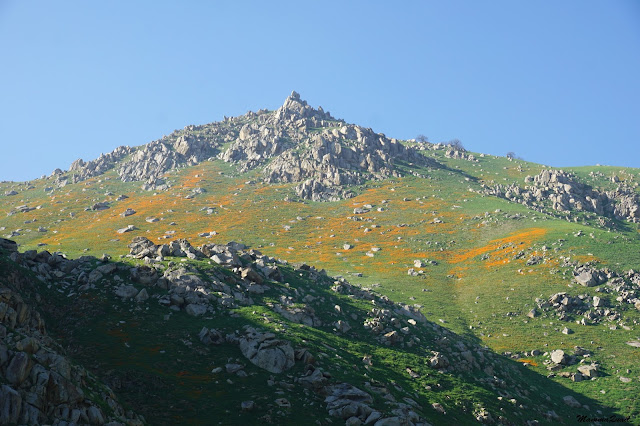 The orange was so intense the it's reflection in the Kern was just as bright and impressive. At the time, it was the prettiest orange mountain side I've seen. Two months later I would behold the orange display of Figueroa Mountain, surpassing any other such display, but the Kern mountains bloom is still one of the best ones to see in early spring. 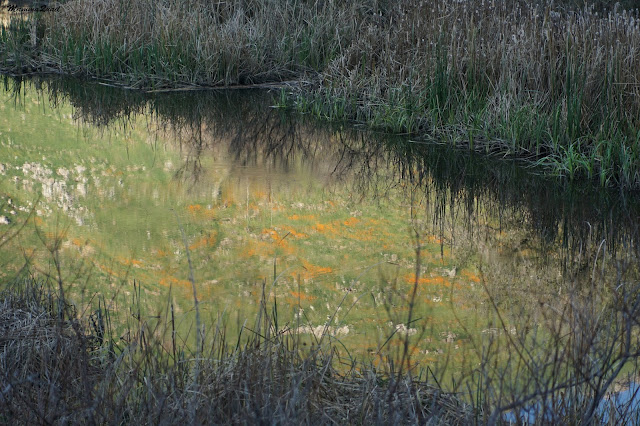 I didn't know what those orange flowers were. Poppies, could be. Also the fiddleneck that I saw blooming right at the river bank. Either way, it was gorgeous.
It is in our plan to visit the Audubon Kern River Preserve on the next time we pass the mountains by Hwy 178. According to the list posted by the nature center there's lots to see there that we didn't yet see. They must've all been sleeping.