On Sunday morning we took our time making breakfast and breaking camp. It was the forth day of our Manzana Creek backpacking trip, and it was also the last day. That morning all we needed was to pack everything and head out of the wilderness. Papa Quail, as pragmatic as always, wanted to be at the car by noon: we would still have hours of driving before we would be home. 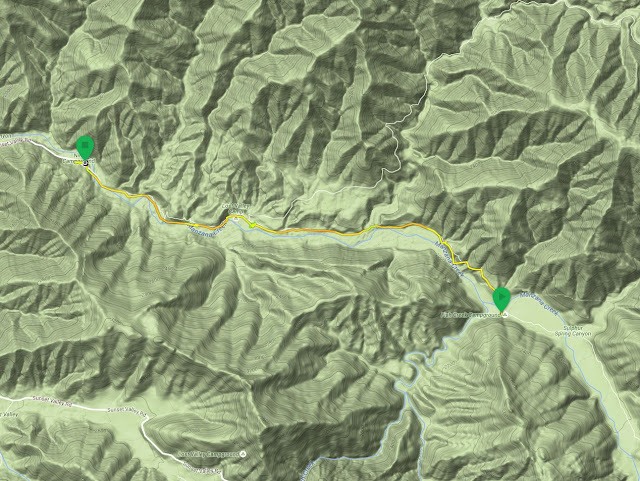 We almost lost the trail this time around too: we crossed Manzana Creek and went on a few steps up a dry wash before realizing we had to make a left turn and go up the hill, along the main creek. 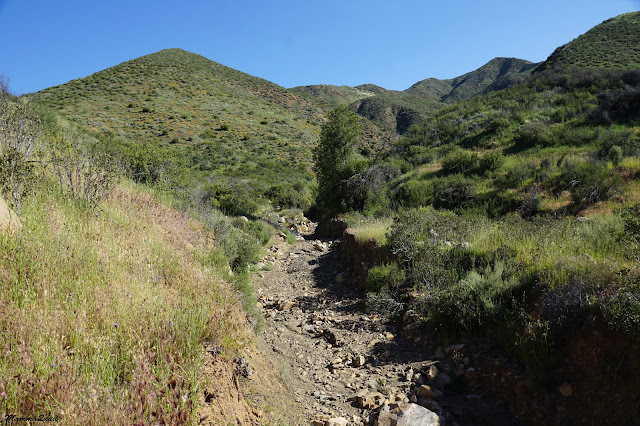 The trail didn't go high very far, but stretched along the contour a few yards over the creek bed. Because the way we had lost the trail on our first day of the trip, this was the first time we were hiking this trail segment.
The wildflowers were just as spectacular ans on any other part of the trail.
I knew about chia from the healthy food section of the grocery store. Sadly, this superfood doesn't agree with me much. The beautiful bloom of this unique sage, however, is more than a superfood for my spirit.
That trail segment we had lost on our first day wasn't very long. Soon we were descending back down to the creek. Before going down I took one long longing look at the valley behind me, where we had camped the night before. I felt we were leaving too soon. 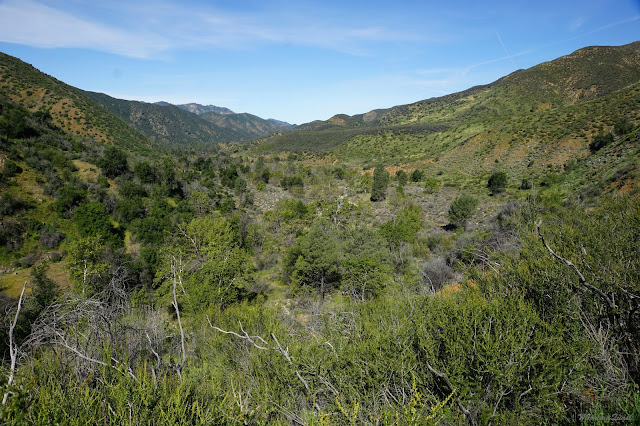 Back by the creek we were going on the same trail we had walked in on. This time, however, we were in no rush and I could pay more attention to the surroundings.
The rest of my family didn't linger for anything. From the moment we had turned around at the Alcove Falls they were ready to go home. The younger chika even suggested to make it all the way to the car on the day before but that suggestion was struck down by everyone else. But then, she was also happy to stop for the third night.
We hiked at a fast pace, backpacks and all. Soon we were walking again on a hillside of rubble. A relatively fresh rubble too because very few plants grew on that slope. A few poppies were the first to settle the loose soil. In time the entire slope will be stabilized by plant roots.
And the source of the rubble - the crumbly layers of sedimentary rocks from ancient times when this area used to be submerged. 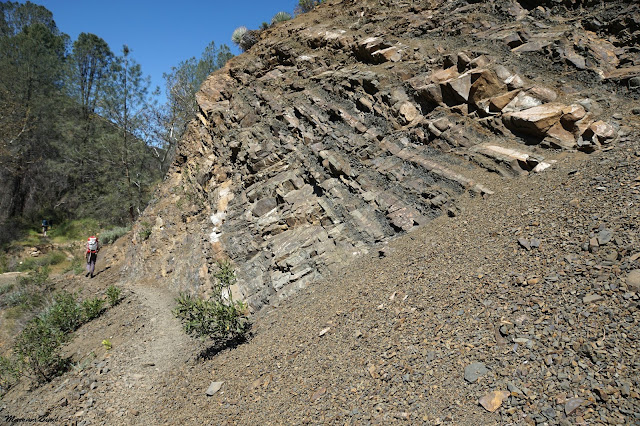 Back down by the creek we were walking in a lovely meadow of grasses painted with patches of wildflowers. Perhaps I was imagining it but the grasses seemed a little less green than on our first walk through three days before. Or maybe it was just the direct sunlight, which was right above our heads. 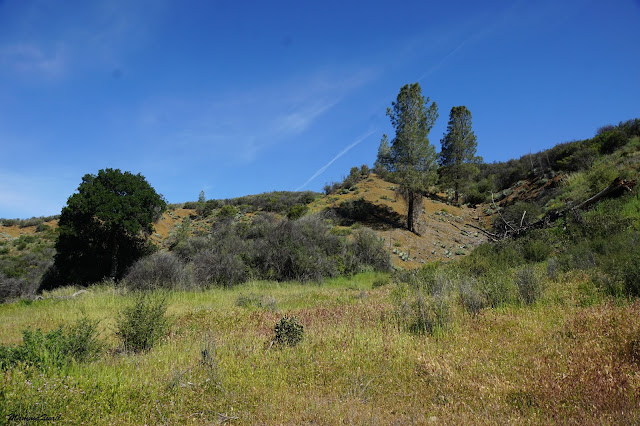 The younger chika started slowing down. She was getting hot and tired. Her pack had the same weight throughout our trip because she wasn't carrying any food to begin with and she rumbled about it being too heavy. I reminded her that not that long ago she had backpacked up a much more challenging trail, but I also told her that we would soon be having a break. Meanwhile, she could help me find some interesting flowers. 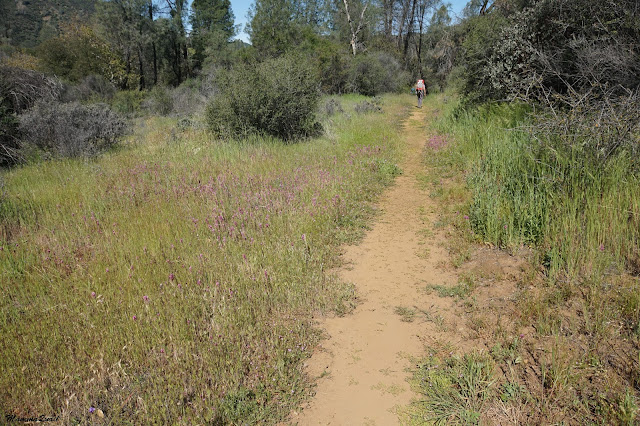 That she was happy to do - she kept pointing at flowers left and right (there were many!) and some I took special interest in.  Either I'd missed them when we first went through that place or that I wouldn't stop to give them good attention at the time.
On that morning, as we were packing to leave, Papa Quail told me that we packed too little food. He pointed out that there was nothing left except for a little snack. I responded that we had packed exactly the right amount of food and that anything else would have been extra weight to carry.
Either way, by the time we got to the Lost Campground by the creek we were all ready for a good, long rest stop. We pulled our snack out of the packs and finished it all. We had one mile left between us and the car. 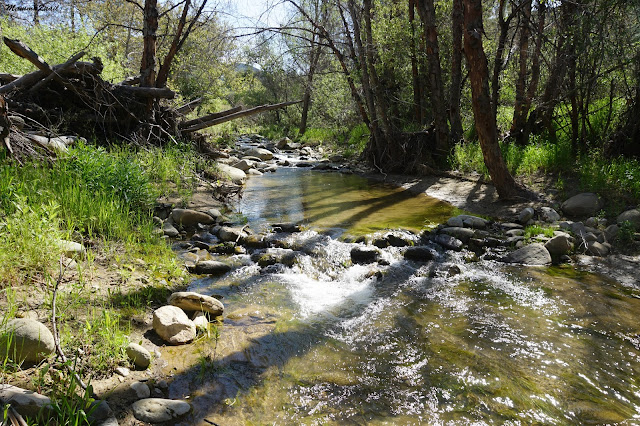 Somehow getting up to walk again was the hardest at this stop. The end was in sight but the mid-day heat cast its spell and we were all drowsy. Except for the elder chika who went to the creek to wash her feet.
After a while when she didn't return I went looking for her and found her staring at the trees. She was birdwatching, she said. I got her back to the table where Papa Quail was waiting with the younger chika. Then we hoisted our packs for the final time and started walking again. 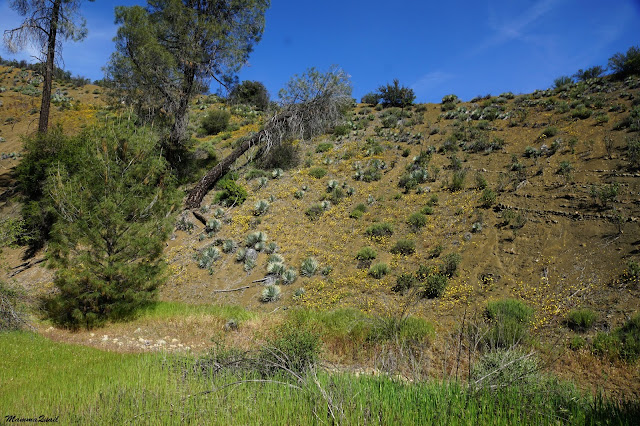 Manzana means 'apple' in Spanish. And manzanita is 'little apple'. We saw quite a few manzanita bushes on our way but those on the last trail segment were loaded with unripe, green 'manzanitas'. It was a god year for them.
The mid-day heat brought with it the annoying bugs, and once again we were stating as we walked. But not all bugs were annoying us. In fact, the vast majority of them weren't. Soon I found interest in some popcorn flowers who were covered with tiny insects which I believe were beetles (although I'm not absolutely sure).
Going above the creek for the final time. I stopped to take it in and to enjoy the light playing in the water.  I tried to remember if the creek was running when Papa Quail and I hiked it for the first time, many years ago. I believe it was, but I have no memory of that hike. 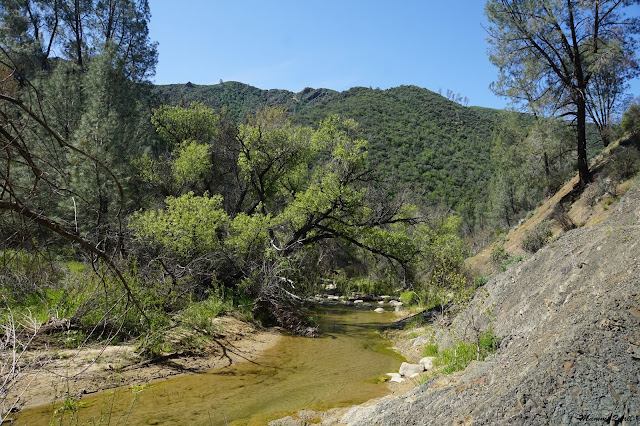 This trip, however, I will not forget. The water, the wildflowers, the stress in my back and hips, all of these will be hard to forget. And then, of course, there are the many photos I took, and this blog post.
Goldfield is not a name for a mine but for a genus of composite flowers that pop up in large numbers, rendering entire areas bright yellow. At Manzana Creek the goldfield flowers did not form patches - they were outcompeted by other (darn) yellow composites, like the coreopsis in the photo below and other daisy-like bloom.
The last mile of our trip went by fast. Well rested and high on adrenaline we walked at brisk pace toward the Nira Campground and the trailhead. By then I could feel pain developing in my hips: apparently there was a surcharge for going on this kind of trip without being properly conditioned.
A sweet fragrance filled the air and I forgot my pains altogether. Three large ceanothus bushes stood at the foot of the hill in full bloom. My family did not stop to appreciate the scent so I didn't leave the trail to check the ceanothus more closely. Instead I took one deep breath, one photo, and run after my family.
We arrived Nira campground and found it full and overflowing with campers and day hikers, all looking fresh and happy. Some checked us out - exhausted and all grimy with sweat and dust, and smiled. I pushed my chest out and smiled back. I'd do this all over again!
The chikas went right into the car. Papa Quail gave them cookies and went about arranging the luggage and readying himself for the long drive ahead. I left my backpack at the car and went back to the creek to wash my feet and change into sandals. The cool, fresh water on my feet felt really good. I sat on a rock in the stream, looking at day hikers crossing the creek back and forth. I could have sat there like that for a long time, but eventually I did get out of the water and back to the car. It was time to leave. 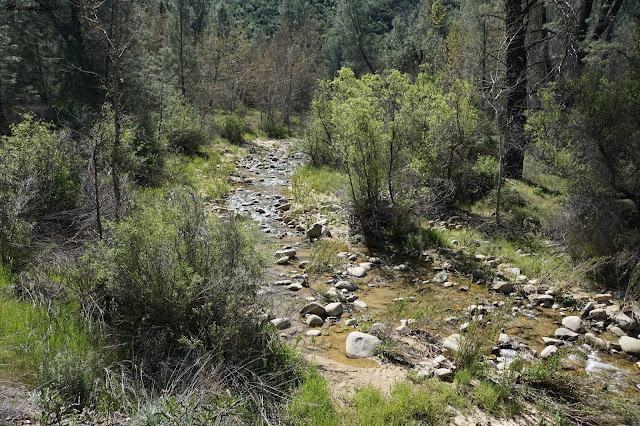 We drove back out by Figueroa Mountain Road. The narrow mountain road was jam-packed with people who came to marvel at the fantastic display of wildflowers.
In some places the road has become a de facto one way lane because of so many cars parking on either side. In short, it took us a very long time just to get off the mountain.
At home I asked Papa Quail, "Well?" meaning, will you be willing to do this again?
He answered with a non-verbal sound which meant he was not committing to anything. But when a little later he added, "Next time we should plan it so that ... " and went on with some suggestions for improvement, I started outlining in my mind our next family backpacking trip. All I need now is to find the time and the right location :-)