Huddart Park has been on my wannagothere list for a while before I actually made it there for the first time, and then it rained.
But spring was just around the corner and one March day I went there again, this time to another trail. I stopped at the gate and asked the attendant what was the status of wildflowers.
"Not much. It's just beginning," he said.
Everywhere else in the coastal region spring bloom was at its peak so I was a bit bummed to hear this. He had recommended a nice, family-friendly loop trail and I was more than happy to take his recommendation.
I went on my hike without high expectations and what I discovered was that the attendant was wrong, or simply not updated. A marvelous bloom was on, with the wave of early bloomers already over the peak and the second wave was peaking. On the following week I returned for the second time with a group of families. Then a month later I was there again, hiking the same trail with another hiking group. I t was good to see the transition from spring flowers to summer's.
A small trail segment lead me from the parking lot to the Bay Tree trailhead where the trail delved right away into the forest. On the east side of the park the forest is dominated by redwoods. Young, thin redwoods, stretching up, hungry for sunlight. 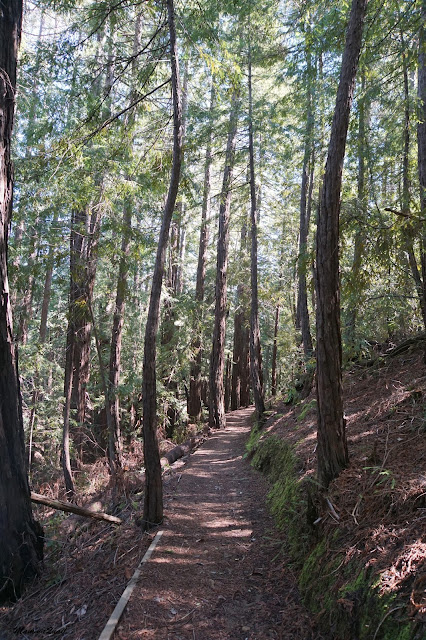 The thin trees allowed quite a lot of sunshine through. Much more than other, older redwood forests I've been to. Accordingly, there was a lot of forest undergrowth, and much of it was blooming.
The pinto violet was growing in the more shaded areas.
The Indian warrior, however, populated the sunny spots. On my March hike I caught the tail of their bloom.
These Indian warrior i've seen in March were the last of the season. So, apparently, were the hound's tongue. They were blooming in abundance still in March, but by April they were all in fruit.
But in March the irises were just beginning, and in April the forest was full of them. Beautiful, proud, majestic.
April brought also the white globe lilies. These beauties I always enjoy finding.
Passing through the grove of thin redwoods I made it to a beautiful grove of laurel trees, no doubt these trees are what gave the trail its name.
From that point all the way down to the creek the redwoods were few and far between. Down on the ground, the delicate woodland star joined the forest's spring fest.
Here and there were fallen trees along he trail. These trees are food for fungi. 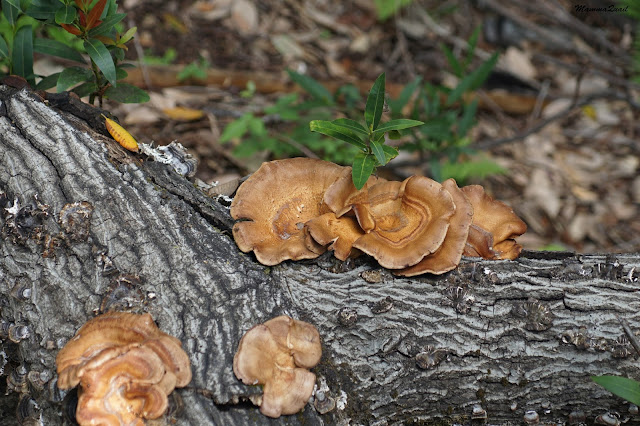 Further down the trail - wood rose were blooming. Their delicate flowers shining between the thorns. Here is the humble wild original of all the fancy domestic cultivars that are the pride of gardens world-wide.
I like the wild rose best.
Spiny scarlet balls on the underside of the rose leaves grabbed my attention: these are galls - a growth caused by an insect that laid her eggs inside the plant's tissue.
Bay Tree trail ends in a wide lawn and a picnic area. The perfect stop for a group to rest and regroup. A common buckeye butterfly was in agreement and landed right next to us, allowing the children to look at it from relatively close distance before fluttering off to a more distant spot.

The lawn is introduced grass, of course. With it - more exotic plants that thrive in old world style lawns.
Usually I disregard these invasive wildflowers. I already know them from overseas and they don't seem as interesting to me as the local flora. This time,however, I did give them more attention. They are beautiful, no doubt. Even the tiny, delicate fieldmadder.
Besides, documenting them helps me remember what grows where.
From that picnic area I continued north on Richards Road Trail that stretches along the creek. By that trail, just a few steps away from the lawn, I found a few checker lilies that in March were in full bloom. That discovery made me very happy - the fritillaries are well camouflaged and aren't easy to see.
Down by the creek there are redwoods once again. Young, thin redwoods encircling the left over stumps of the old growth trees that were logged off a century ago. The trail was very damp, even muddy at places. The remains of a rainy day earlier that week. I walked slowly, circumventing the occasional puddle. Under the redwoods bloomed their associate, the redwood sorrel.
On my April hike the sorrel was accompanied by the delicate starflower.
The creek I was walking along had a nice water flow. Right before going on the bridge to cross to the other side there is a small trail that leads to the water. It was a perfect place for a long stop where the children (and adults too) could take off their shoes and wade. My elder chika who joined the group hike found some ocher stones and offered to practice her face-painting skills on the other kids in the group.
Both my solo hike and my group hikes were short and easy paced. Another time I will explore further up that trail, but on these hikes I stayed on the west side of the creek and took the left turn onto Crystal Springs Trail, going back uphill to the trailhead.
The trail going up is short, but it is sweet and full of interesting surprises. Some very small - it takes close attention to see them. In the case of those fungi in the photo below the color contrast certainly helped. 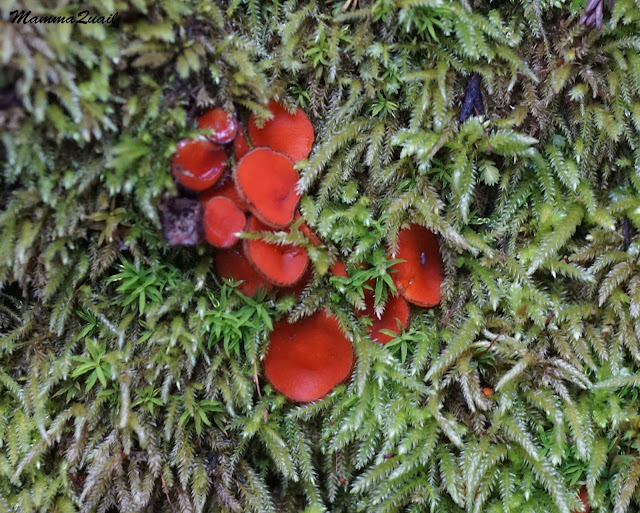 On my March solo hike a deer crossed my path on the way up. It was going fast between the trees, but I was able to catch a blurry image of it before it scurried away.

But the nicest surprise along that trail was about mid-way up: a small patch of fairy slipper orchids, well hidden in the vegetation. My March group got to see them too, but by April they were finished. Got to go back next spring to see them again.
The road leading from Woodside to Huddart Park is narrow and winding and it is very popular with bicyclists. The practical meaning of this is that it's a very slow drive to get there. The slow speed comes with a special bonus: the ability to spot and appreciate the roadside botanicals. And in the case of sighting a columbine patch - to make a special stop (hard to find a pull-out there!) and inspect it closely.
Huddart Park has a nice trail system and I only got to explore a bit of it. The We are very fortunate here in the Bay Area, to have so much Nature, so close by. I promised myself I'll go back there soon to explore some more. Soon.