Up with a Gusto and Down with the Trickle: Alcove Falls at Upper Manzana Creek 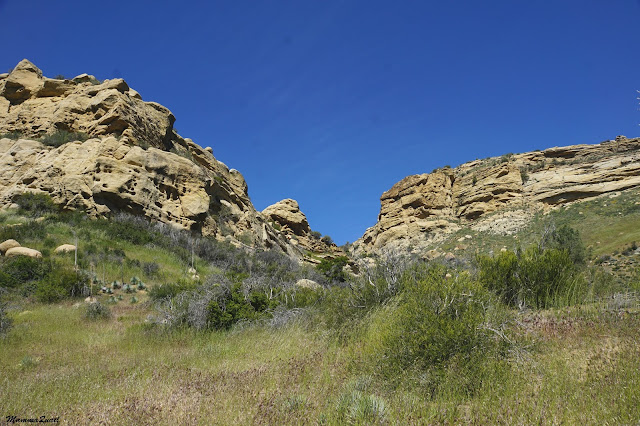 The third day of our family backpacking trip at Manzana Creek started with the younger chika sneaking quietly out of the tent early in the morning. She wanted to have another go at fishing the trout she saw the day before at the water hole below Manzana Narrows campground. Papa Quail and I were well underway with the morning routine of boiling water and cooking breakfast when we heard the excited shouts from below, announcing that she had caught the fish.
Within seconds her older sister shot out of the tent and took possession of the fishing rod, and moments later a second fish bit the hook and the girls were even.
We had big plans for that day: we planned to hike up to Alcove Falls and then come down the creek all the way back to Fish campground where we had stayed on our first night. That would be the longest stretch we planned to hike on the entire trip - 7.4 miles altogether. The first part at least we didn't need to carry our backpacks on. So after breakfast we packed everything except for the tent, inside which we left our backpacks. We took water and snacks and headed up the trail.
At first we were walking close to the creek. We even crossed it a few times. at least 5 times, maybe 7. The scenery and vegetation was very similar to what we've seen on the day before as we got near Manzana Narrows.
That part of the trail was easy. The slope was mild and so were the temperatures. 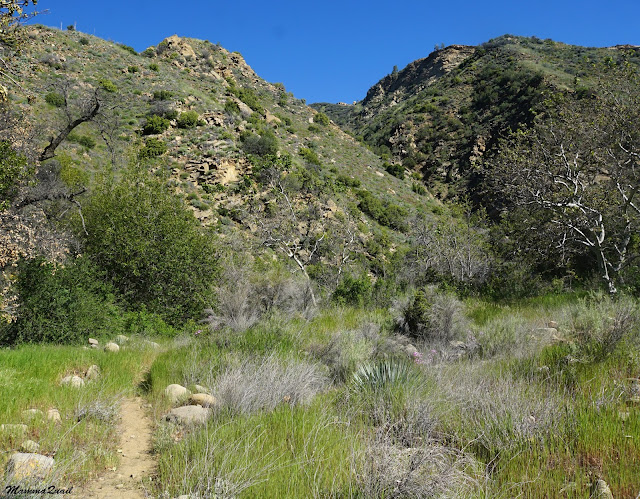 I saw more of the flowers I've seen earlier on our trip but this time I had much better illumination of some :-)
We took our time going up along the creek. A big slow down were the numerous creek crossing we had to do. Each such crossing meant balancing on a line of rocks or logs precariously placed across the water. At no point there was any risk of being carried away or drowning - the stream wasn't that high- but none of us had any desire to walk the rest of the hike with wet shoes.
Besides, the easy going pace allowed me to catch up on checking out the wildflowers.
Even plants that I've seen before looked more festive that day. The prickly phlox (which isn't phlox at all), stood out between the rocks and gray-green shrubs like bright pink cushion. It would be a wonderful choice for people who want to populate their yards with California native plants.
And a common acquaintance: the Common Phacelia. Not as many as one might expect by the name. Other Phacelia species were more dominant at Manzana Creek.
We crossed a large tributary, and right after we got to a trail fork. Alcove Falls, according to the map, were located about a mile and a bit on the left trail leading to the White Ledge Campground. So we turned left and immediately started ascending in earnest.
The trail left the water, and also the shade. We were climbing the south-facing slope, in full sunlight, and the time was nearing mid-day.
It was high time for a sweaty workout hike.
The flowers didn't mind the sun and the head. on the contrary - they were all open and perky, staring right back at the blazing sun. Particularly the foothill poppies which painted the slope with patches of intense bright yellow.
And the suncup, as tiny as it was, didn't get its name for nothing.
The heat wasn't the only bothersome thing - there were the flies too. The more we sweated, the more flies circled us in a hungry buzz. Now we added swatting motions to our walk.
This fly below wasn't part of the annoyance team. It just hovered peacefully an inch over the ground.
After about half a mile of a straight stretch the trail started switchbacking steeply uphill. On the horizon we could see the white ledge cliffs - the falls was right below them, according to the map. We hurried along toward the beautiful rocks.
On one turn of the trail I looked back. The valley of Manzana Creek stretched far below me, green and lush, glistening in the sunlight. We had gained quite a lot of altitude already. 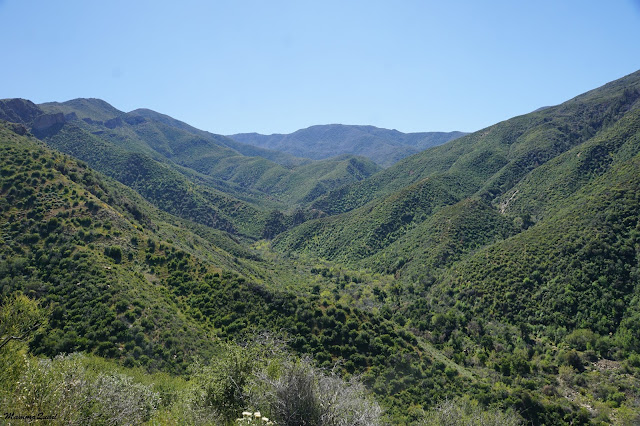 But as high as we got, there was still no sign of the falls, or of any water flow whatsoever. My family started expressing their doubts aloud. It was hot, they were tired, and Papa Quail mentioned that we still had to walk all the way back to Fish campground after this.
We found a small patch of shade and sat for a break. Then we agreed to walk just a bit further, then turn back.
That 'further bit' brought us to the bottom of the cliffs.
There the trail leveled off and we found ourselves walking in a small, great vale that lay between the cliffs bottom and the slope drop off. A mild breeze eased the heat and everyone seemed happier.
Most of the cliff walls were exposed, but rock ledges had vegetation growing there like an exquisitely designed landscape. In the distance I could see a man climbing on the rocks and I wished we had the time to do more exploration of that area. It is really beautiful there.
While I appreciated the lovely rock gardens on the cliffs Papa Quail found the trail to the waterfall. It was a narrow strip cutting through a small grassy meadow. Easy to miss. The main clue to the existence on any waterfall was a tiny brook, quietly running under the grass. We followed the trail to the edge of another, lower cliff that we didn't see from the trail below. Near the edge of the cliff the brook widened a bit, making a long and shallow waterfall top pond.
That was the top of Alcove Falls. The waterfall itself was not visible at all. I approached the edge as far as I dared but couldn't see the flow down. The amount of water suggested that this flow was likely to form misty spray upon dropping over the edge.
I made some distance between myself and the edge and from that safe distance I could appreciate the Herodian-like rock pattern. 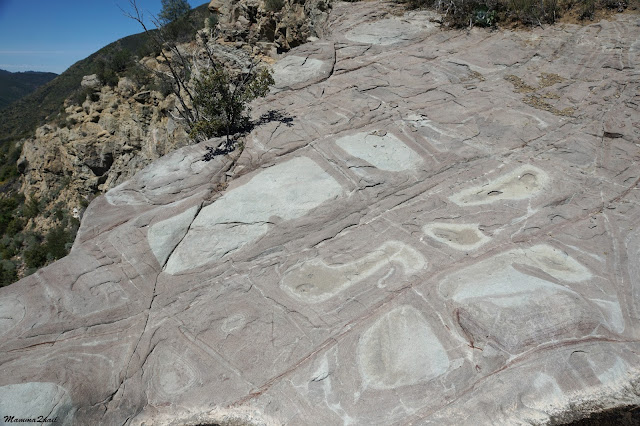 A few lizard were sunbathing out on the rocks. Western fence lizards all of them. We stayed there a little to enjoy the view and the water in the pond, but eventually it was time to turn around and go back down.
I was the last to leave that lovely spot. If we only had a day or two more we could have stayed there, and continue up the white ledge and back on the ridge. But we had to be back home for school. And so, with a sigh of resignation, I took a final photo of the pond and the cliffs and started after my family on the hike downhill back to Manzana Creek. 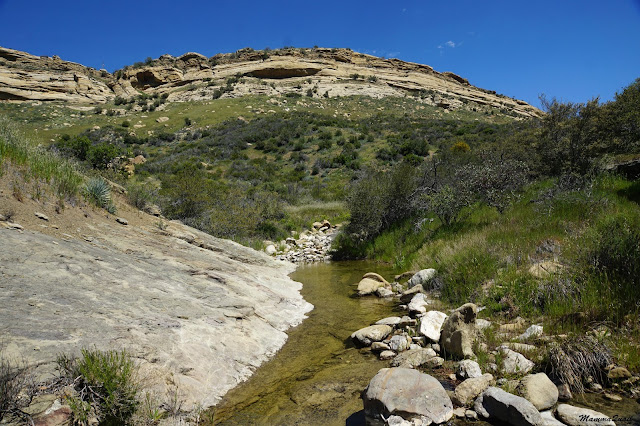 Going down is faster. I didn't stop as frequently to photograph flowers or other things. We were rushing down between the poppies, hurrying to make it back to Manzana Narrows.
We were happy to be back down at the creek and in thicker, shadier vegetation.
It was already afternoon but the sun still got through the bushes. We were walking inside a green tunnel, in a green world. I liked that. 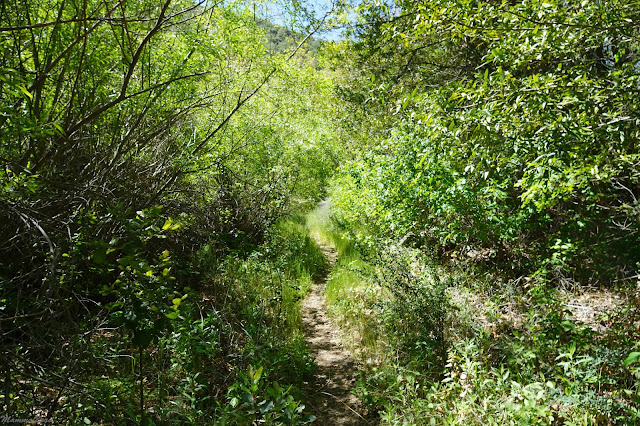 Before we new it - we were back at the Narrows, where our tent was waiting since morning. We sat for lunch and a good, long and refreshing break. 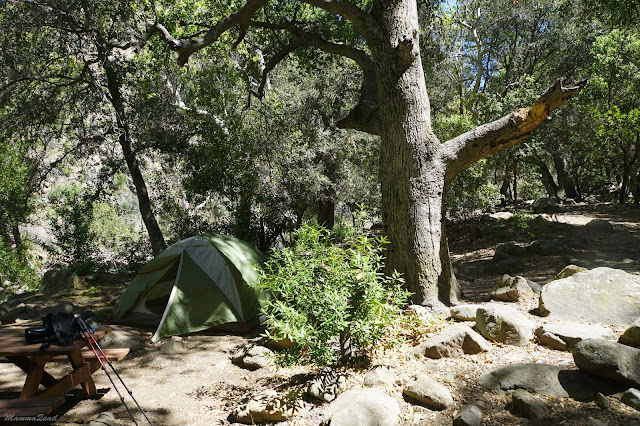 We were no longer alone: it was Saturday, and day hikers were up the trail. Many of them stopped at Manzana Narrows to rest and enjoy the stream. The chikas too went to the creek again to play while Papa Quail and I took the tent down and rearranged the packs.
Suddenly I heard the chikas call in excitement: they had seen a snake! Papa Quail and I grabbed the cameras and climbed down to the water. It took me a loooong time to see what the sharp-eyed chikas had seen: the snake was so well hidden!
The singer in the trees finally made appearance and Papa Quail got his shot: it was a house wren.
Now we were truly ready to continue down the stream.
We hoisted our packs and started down the same trail we hiked up the day before. It was easier this time - we were going downhill :-)
Once again we were crossing the creek, balancing on wobbly rocks. I listened to the dreamy sound of the flow and was mesmerized by the light play in the water. I didn't want to think that this was the way back. I really wanted to stay there longer.
The view of the canyon opened up. Despite the heat we were walking at a quick pace, as if we were fresh after the night's sleep.  Everyone was silent, even the elder chika had stopped reciting movie lines. 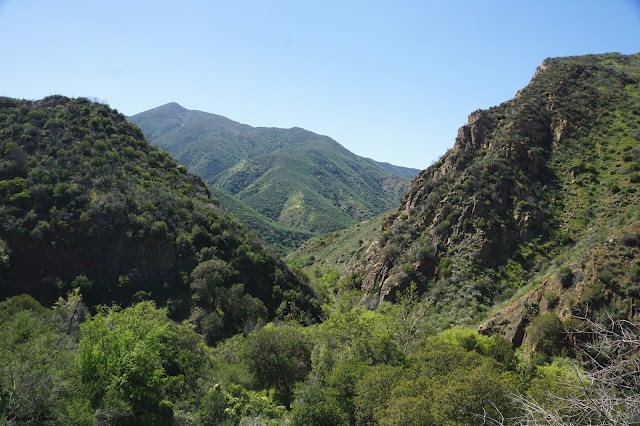 Once again we were walking on the exposed hillside high above the creek, but this time it seemed effortless. Insects buzzed everywhere and butterflies teased us, flying incessantly between the flowers, never stopping to pose for the camera. Even the usually slow beetles gave me a hard time. Good thing that the plants don't move around much.
I still got a few photos of insects doing their sacred job of being third-party sex mediators between flowers.
Down, down, down. We did stop for a break at that nameless campground where we had stopped to refill water the day before. This time we didn't refill. We were walking quickly and had enough water to get us to our destination at Fish campground.
We had walked the last lag of that hike so quickly that I barely have any photos from that stretch. Some images, however, were too cute to pass on.
It was starting to get late when we finally were on our final descent from the hill. I could see below the wide area of Manzana Creek where our campground was. The shadow of the south-western hills was already cast on the campground area.
I paused and took a moment to etch the image in my cortex. I suppose taking a photo is more effective. I don't know if and when I'll be there again. I hope I will. 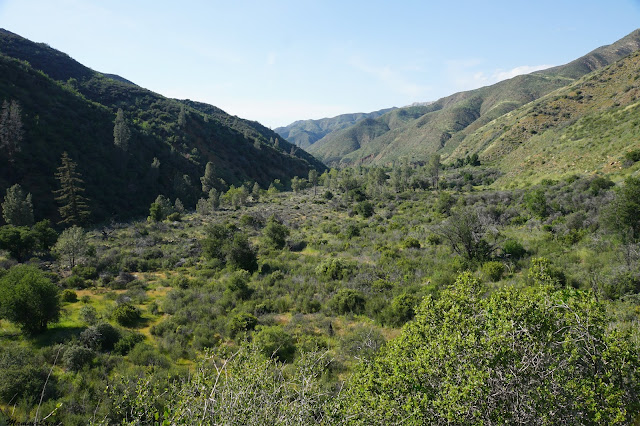 We made it back to Fish Campground with enough daylight to set up our camp, get firewood and cook dinner. Our friends from the first night had already left and we settled in what was their space, which was the closest to the creek. They, too, had left a pile of collected firewood which made our work there easier.
We were all pretty exhausted after the long day we had so we went to sleep early. Tomorrow would be our last day at Manzana Creek: the final hike to Nira Campground where we had started our little trek.