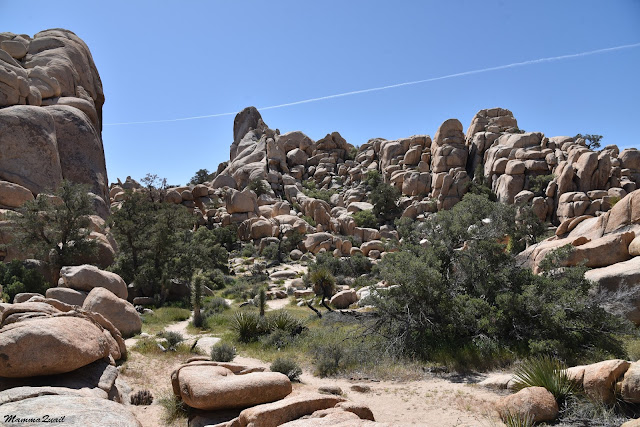 The Hidden Valley is the flag trail of Joshua Tree National Park. It embodies nearly everything special and beautiful about it. We hiked it very time we visited this park, and of course it was on our itinerary for this visit too.

It was a busy day at the park and the parking lot was nearly full when we arrived at the Hidden Valley site. We didn't waste any time and quickly joined the stream of people that were making their way on the short path leading to the valley entrance. 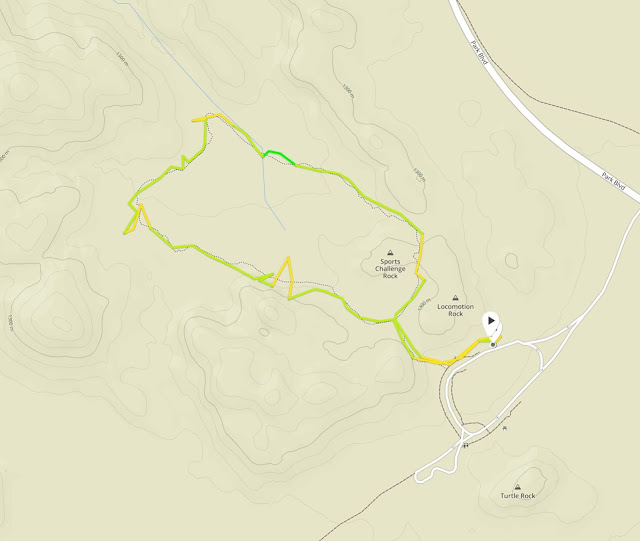 For Pappa Quail it has been over 10 years since he'd been there last, and Grandma Quail have never been in Joshua Tree NP before. As for me, I was there with my botanist friend in 2013 with intention to see the desert spring bloom. 4 years later, the desert superbloom finally caught up with us ...
Everything was blooming around us. Even the short path from the parking lot to the valley itself we walked really slowly, enjoying the sights of bloom.

A low wire fence stretched along the path near the parking area to protect the soil and plants beyond it. Still, there was much trampling on the other side of the fence. It was sad to see that.
The path into the Hidden Valley is artificial. It used to be that this valley was completely surrounded by the rock piles, thus very effectively hidden. In earlier settler days cattle thieves used to hide their stolen animals in that valley. Later an easier entrance was blown up through the rock and stairs were formed there.
Needless to say, no cattle graze there these days.
It was a beautiful warm day, and it was getting hotter by the minute. Many lizards were sunning themselves on the rocks and she darted quickly from the gravel path as we approached.
Other than lizards there were plenty of other wildlife in the valley. Mainly insects and birds. The bees were very active, and I even saw honey bees there, either from a feral hive, or that flew all the way from the town.
The non-native honey bees had their representation in the park, but the pollinator scene was dominated by the California native bees, like this one that I photographed pollinating a Parry's Nolina.
When there are so many insets buzzing about one would expect to see many insect-eating animals. The lizards were plentiful, and there were also many, many birds in the valley. Unhindered by the numerous hikers, the birds were busy singing, courting, and of course - foraging too. Like me, Pappa Quail stopped frequently, observing the birds and giving each one good attention.
The little woolly daisy bloomed in little patches on the ground in the open spaces between larger shrubs. I remembered how excited we were, me  and my friend, four years ago when we found a few of them in bloom. This time they bloomed in great abundance, but I was just as excited. I had many, many photos of these to select from for this post.
Other than the woolly daisy there were many other 'belly plants' in bloom, so called because to get a proper shot of them one must lie down on her belly to get close. I didn't go down on my belly so all my photos are from above :-)
The trail circles the Hidden Valley inside its granite walls. We hiked it clockwise, as the interpretive signed directed. All around us rose the walls of granite, not sheer like in Yosemite, and certainly not as high, but enough to give the feeling of being inside a natural corral.
The boulders and cliffs might not be as high or as sheer as in Yosemite, but nonetheless they make a fantastic playground for rock climbers. There were quire a few of them there on the day of our visit. We stood for some time observing the climbers, then moved on. 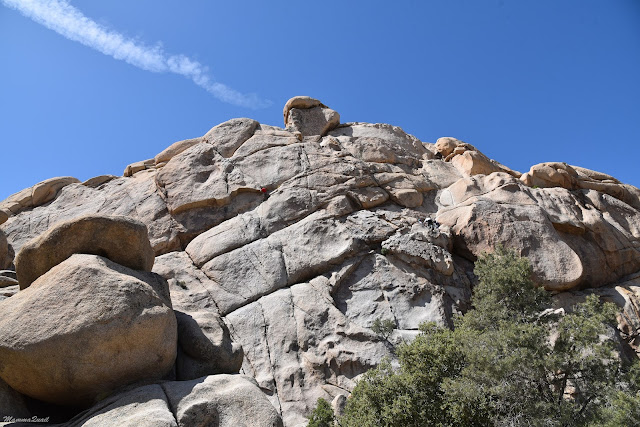 There were Joshua trees inside Hidden Valley of course, but there were also other trees there, and in higher numbers than the surrounding area. I assume that's because inside the valley the weather is somewhat milder and the water retained better.
The pines too, where in bloom.
There were oaks in Hidden Valley as well. They were scrub oaks, not the most majestic representers of the genus Quercus, but lovely oaks still. The light green aura that surrounded them as well as my sneezes told me they were in bloom even before I got a closer look.
The Hidden Valley is small enough, and it was as crowded as I ever seen it. Getting wide shots with no people in the frae was  challenging, but every now and then I captured a split-second of a people-free wild west image.
Tall blossom of the Parry's nolina protruded from the green prickly foliage balls, standing against the red rocks and the blue sky like silent sentinels. They had a good winter, and were putting on a beautiful display of lush and vigorous growth and reproduction.
And speaking of reproduction ....
While male and female animals find each other to reproduce by direct contact, plants need third party facilitators, and reward them handsomely for their services.
This spring the pollinators, just like the flowers, were in great abundance. And not all pollinators were insects, either.
The yucca hosts wildlife other than pollinators as well, and Pappa Quail got to document some of them, like this house finch below.

The Hidden Valley trail isn't a long one, and it is certainly not difficult. Still, we hiked it in crawling pace. And who would blame us? there was so much to see, so much to take in.
Some of the colors were bright and shiny, standing out against any background. The Indian Paintbrush wasn't the most common flower around, but it had a very strong presence with its dark crimson bracts.
The Mojave aster also sports intense color, although not quite as bold as the Indian paintbrush. It was also considerably more abundant, peeking from under large bushes or boulders.
Other blooming plants were really small, blending so well with the gravel that were easy to overlook.
I enjoyed them all, the gig and the small.
For the most part Grandma Quail was walking next to me, enjoying those same wildflowers. She also pointed them out to me, occasionally sighting some that I had missed.
As slow as we walked, still we were nearing full circle. Now the trail was closer to the rocks, meandering between large boulders and slowly ascending.
We were now walking along the northwest-facing side of the valley, and the vegetation was denser there, and lusher. Even the cacti seemed fuller there, exploding in new growth.
Cactus bloom is particularly impressive. I love the look of the delicate flower protruding through the most vicious thorns.
Flowers that had already finished blooming on the western side of the trail were still at their peak bloom on the eastern (west-facing) side.
And some of the wildflowers I saw there I did not see until then. Also, I wanted more reasons to linger behind, so as my family progressed toward the valley's exit I made the effort to photograph even the tiniest of blooms.
Slowly I too made it up to the valley's exit gap. My family was waiting for me under a nice, shady pinyon, and the chikas practiced some rock climbing on a nearby boulder. 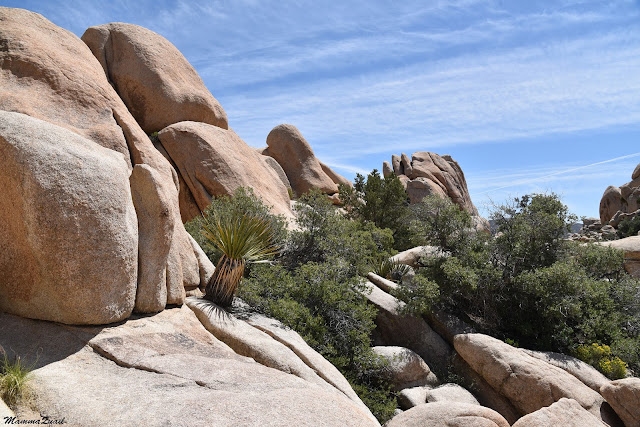 As we made our way up to the gap I fell behind again. Even flowers I had photographed many times already looked alluring still.
My family was already down at the parking lot when I made it all the way up to the gap.
I stood there for a moment and looked around. Four years ago I had taken a photo of the Joshua Tree forest outside of Hidden Valley from that very spot. It was time to get a fresh image of that impressive landscape.

We arrived back at the parking lot and took our time wrapping up things. At one point Pappa Quail was some distance away and I was sitting at the edge of the car's opened tailgate with Grandma Quail, gazing across the road, when a small squirrel came up the curb and lay flat on it. I jumped down, went to the passenger seat where Pappa Quail had left his big zoom camera and brought it back to the car's rear end, staggering under its weight. I managed to snap a few shots before Pappa Quail returned and relieved me of the optical burden. The squirrel, I should add, behaved perfectly, stopping every few seconds to pose for us as it edged along the curb. Then other people noticed and foolishly approached it, and it run away and hid.
We drove to the other side of the parking lot where we found a yet unoccupied (and shaded!) picnic table and ate our lunch. After that we had time for one more hike before heading south to the Cottonwood Oasis. It was just enough time to revisit another trail we've hiked before, 10 years before in fact, on our first visit to this park. We packed our leftovers back in the car and drove across the road to the Barker Dam trailhead.