Water on the Second Strike: The Barker Dam Nature Trail 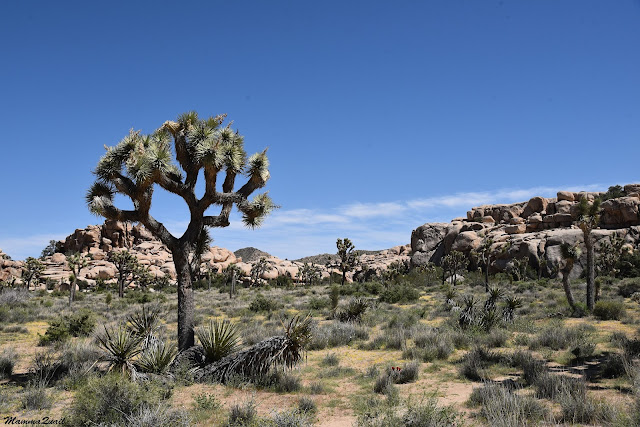 On our first visit to Joshua Tree National Park 14 years ago Pappa Quail and I also hiked the short and sweet Barker Dam Nature Trail. I don't remember much of that are except that it was hot and dry, and the sign posted by a dry lake prohibiting swimming. We found that sign amusing, therefore we documented it.
There was water there now, we heard people talking at the Barker Dam trailhead. It would've been disappointing if there wasn't, considering the copious amounts of rain that the area receives over the winter. So there was that to hope for.
I could tell already at the trailhead that this would be a rewarding hike. The bloom, just like at the Hidden Valley, was in abundance, and all over the place. even species that I haven't yet seen.
Pappa Quail too found something to look at on the rocks near the trailhead: a pair of mourning doves in courtship.
After taking in the views near the parking lot we embarked on the short Barker Dam Nature Loop Trail. Like in Hidden Valley earlier that day, there were many other hikers on the trail with us, and capturing people-free scenery photos was somewhat challenging.
To get to the loop we walked through a narrow gap between high granite rocks. We didn't see any climbers on these rocks but they were very pretty to look at, and seemed inviting for a climb. 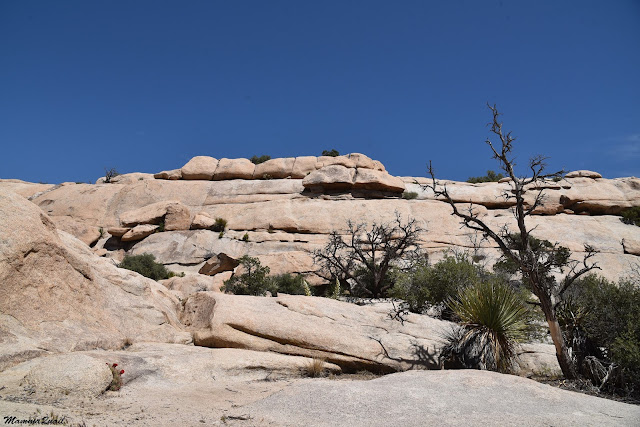 We didn't do any climbing, but plenty of lizards did. we saw many lizards on that hike, energized by the warm sun.
The birds too were very active. It seemed that every yucca was claimed by a bird or a pair of birds, and the air waves were filled with their spring songs.
I enjoyed the birds much, but my attention was mainly on the wildflowers along the way.  Even flowers I have seen plenty of already.
I have already seen plenty of the Mojave Buckwheat around for it is a very common plant. It was the first time on this road trip, however, that I saw one in full bloom.

Another familiar plan that I can never get tired of seeing in bloom - the beavertail cactus. I love cacti any time of year but in bloom they transform like by magic from evil-looking spiny beings into gorgeous, festive
We were walking slow. Slower even than our walk through Hidden Valley. Maybe it was all the people about us or the heat, but we did take our time on that trail. That gave me plenty of opportunities to explore more closely the wildflowers.
As I was selecting photos for this post I found this one at Pappa Quail's folder. It took me a moment to realize it wasn't the Joshua Tree that Pappa Quail was after.
I was more focused on the down to earth yuccas. They were closer.
Despite uor slow pace it didn't take long to Arrive at the lake. And yes, there was water there. Pretty scuzzy, but water nonetheless, and mirroring perfectly the rocks beyond.
We lingered long by the lake. The chikas were looking for frogs (the elder chika even found one but it hopped away before I came over with the camera). Pappa Quail was looking for birds, of which there were plenty.
There were also many butterflies about, and then there was one butterfly less.
Most of the shrubs by the water were willows but there were a few other species too, some of which were in bloom.
The willows looked pretty over the water and even more so when splayed on its surface.
We looked for the  no swimming sign that we remembered from our first trip there but we didn't see it anywhere. I didn't think it was necessary. After all, who would want to swim in such a murky lake?
As we circled the water and went over the dam I saw two who would. They stripped down to their undergarments and went off for a swim. Perhaps it would be good to reinstate that sign. To protect the giardia microbs, naturally.
I averted my gaze from the swimmers and looked down below the dam's spillway. Down below was an old double, round water through that on out first visit was parched dry and now was full with water. Behind it the creek continued with a thin flow, then disappeared between the shrubs. Beyond that - the endless Mojave Desert.
We descended from the dam down to the valley below. The short trail segment leading down meanders through a small rock garden featuring nice rounded granite and cushions of shrubs, many of which were blooming. 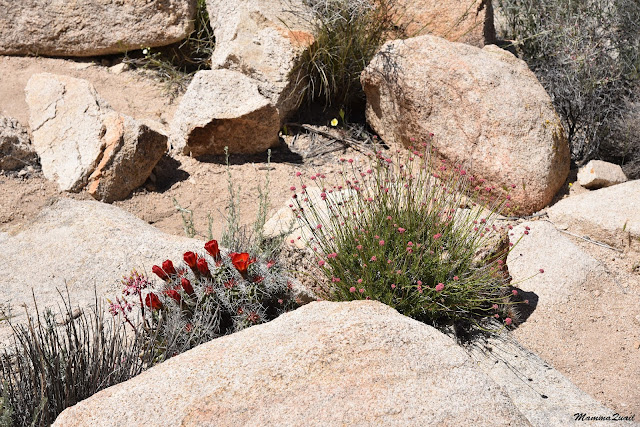 Down at the valley my family continued along the trail while I took a little detour to inspect the creek a bit closer. On the way there I saw these bushes that looked like they were flowering but on a closer look I saw these were fruit. The bushes were laden with them, and looked very pretty.
between the ambrosia bushes were other shrubs that were indeed blooming, and that I haven't yet seen in bloom. The flowers reminded me of tobacco and when I identified it I found it indeed to be of the nightshade family.
The creek was just a narrow trickle, its path marked by the dense bloom of the yellow monkey flower. 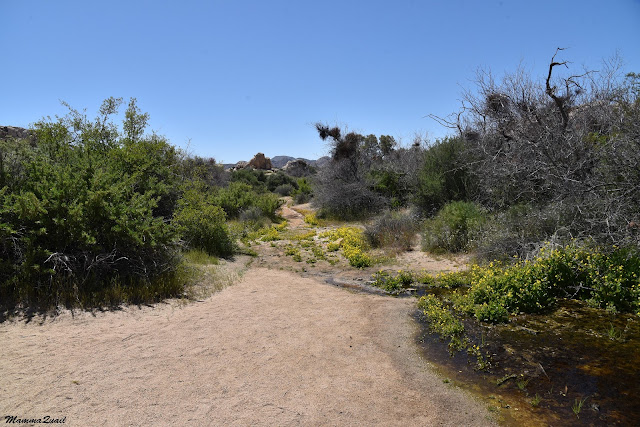 These water-loving plants decorate many a creek bank throughout California. It was nice to see it in the heart of the desert as well.
I finished exploring the creek, perhaps a bit too quickly, then hurried back to the trail to catch up with my family. They had not gone very far for they saw an interesting red plant hanging on another shrub and waited for me to tell them what it was.
The mistletoe wasn't the only red bush in the area. It seems like for a plant to grab attention in the desert sporting intense red flowers, fruit or bracts would be the best way to go.
There were plenty of Joshua trees about, but despite the good winter none were blooming, nor bearing any buds. A Joshua tree splits new branches only at blooming apices so I guess none of these trees would branch this year. On the following day I hear a ranger talk to a group of people at the Mara Oasis Visitor Center, telling them that the Joshua trees need cold nights to induce bloom and these were lacking in the past years. It could also be the effect of the long drought preceding the one good winter that had drained these trees of their resources.
This one appeared to be dead, but for the little tuft of green nestled between the dried up shriveled branches.
We followed the trail until we reached the ridge of granite, and a rock standing apart that was a site of    petroglyphs inscribed by the native people of this place, the Chemuehevi. Sadly, many of the petroglyphs were vandalized, traced over with paint. 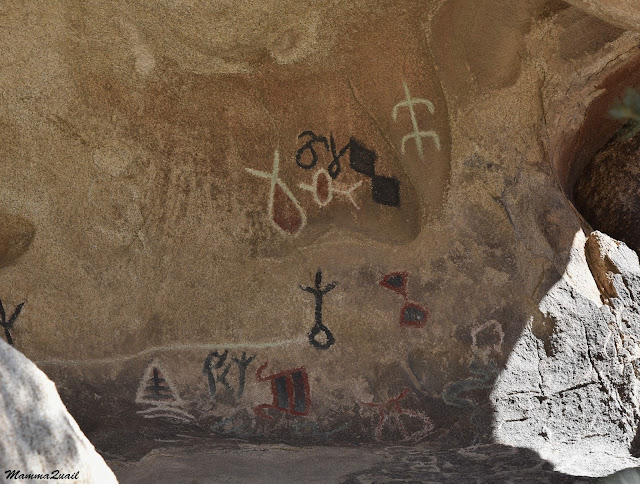 From the petroglyphs site we continued east along the granite ridge. This part of the trail reminded me a bit of the Hidden Valley. 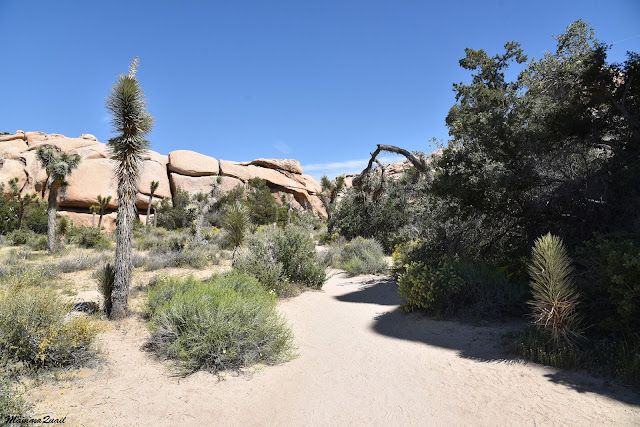 There too, Pappa Quail was ahead with the chikas while me and Grandma Quail lingered behind, giving attention to all the wildflowers.
I never fail to stop for blooming cacti. Especially cholla. 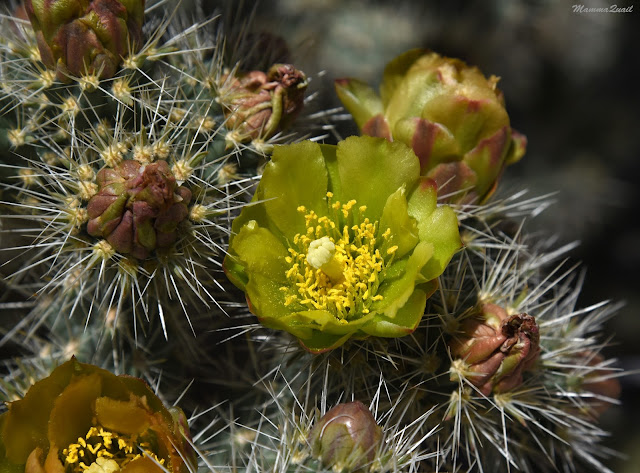 It was genuinely hot by then. Little lizards darted here and there along the path. And some of the lizards weren't so little.
I caught up with Pappa Quail near the completion of the loop. He stood still, focusing all his attention and also his camera on a nearby bare tree bearing two small thorny nests. A small colorful bird was moving between these nests, as if not sure which one to settle for. That was a verdin, and he looked very busy preparing a nursery. We didn't see any Mrs. verdin though. Maybe she was too shy, or maybe still at the wishful thinking stage.
We completed the loop and started back on the connecting trail through the gap of the granite rocks. There I got to see again all the plants I either missed or didn't give due attention on the way to the dam. 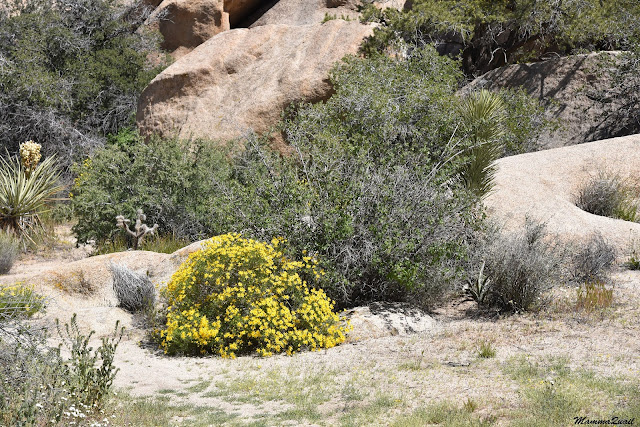 And some that I simply got better pictures of the second time around.
Yes, there were some flowers that I had missed on the way out to the dam. Some surprisingly close to the trail too. I didn't miss them on the return, though!
Once again I found myself lagging behind. This time I stopped to look at a dry wash that the trail crossed. 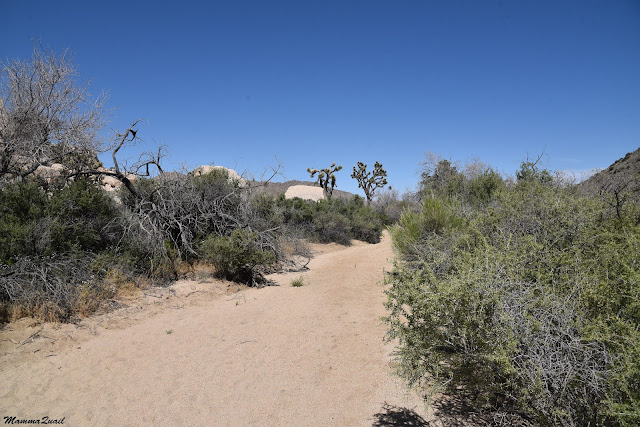 A glimpse of color beaconed me and I left the trail and walked a few steps into the wash to inspect it closely. I saw several of these on the next day, but I recognized them by the foliage. This individual was the only one I've seen in bloom. It bears the most fitting cumbersome, and unimaginative name of, Hole in the Sand Plant.
I returned to the trail and quickly covered the remaining distance to the parking lot. Myfamily was already in the car so I just took a quick goodbye photo of the pretty grass near the parking area and joined them inside. 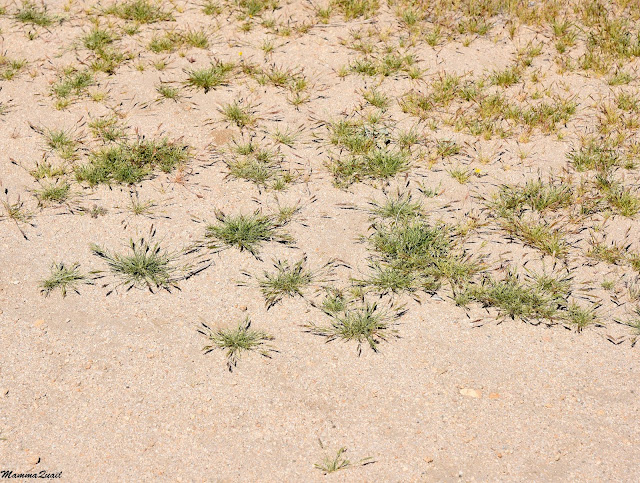 Pappa Quail was very happy: he had photographed a bird of species he had never seen before on that trail. I look at his photo and I understand his passion, for there is no chance in the world I'd be able to recognize this sparrow as different from any other sparrow near my home .
By the time we drove out of the Barker Dam parking area the sun was already on its way westward. We drove south, wishing to get to Cottonwood area and see the Ocotillo in bloom. And there was also the Cholla Garden we expected to stop at. So much to see in so little time! The Mojave Desert is indeed an amazing place.