What's Cookin' at the Devil's Kitchen?

last year I visited Lassen Volcanic National Park with a group of families.We were there in mid-June and the trail to Bumpass Hell was buried in snow so we went to see Devil's Kitchen instead.
Two days before our group hike I was there with only my chikas, and at that time I took most of these photos.

It is a long and partly dirt forest road from the town of Chester to Warner Valley where the trailhead is, and a tiny dirt lot for parking at the end of it. The park rangers have been diverting people to Warner Valley so the tiny lot was nearly full. I managed to squeeze into a shady spot, prompted my chikas out of the car and headed down the trail. 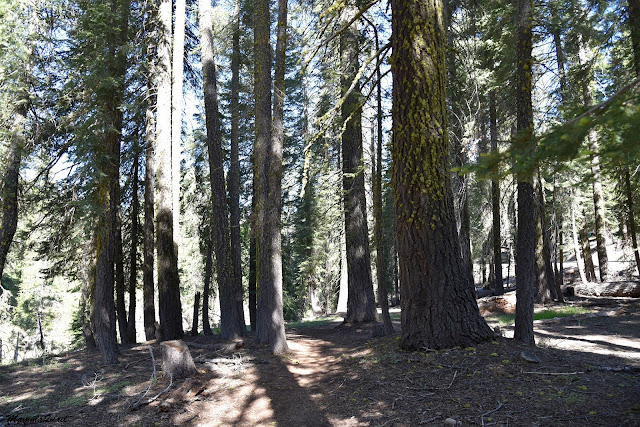 The trail begins in the woods, and in the beginning it is mostly level. I could hear the creek flowing below us and here and there also caught glimpses of it between the trees.
After a short distance the trail exits the woods into a meadow and becomes a boardwalk.  It was so green there it almost hurt my eyes :-) 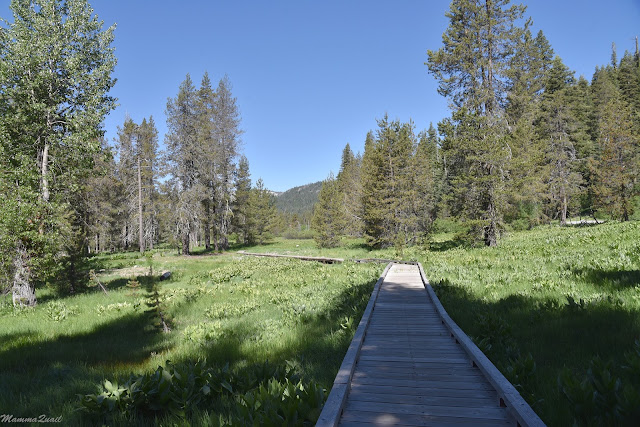 A robin perched on a rock in the meadow was eyeing us warily, barely remaining put until was all passed his rock.
The trail led us to the creek crossing. Just before going on the bridge I noticed something gray in the water. My elder chika burst forward exclaiming, "Dipper!"
There were, in fact, two dippers, hopping about near the water. We stayed there for a while observing them, then crossed the bridge and moved on. 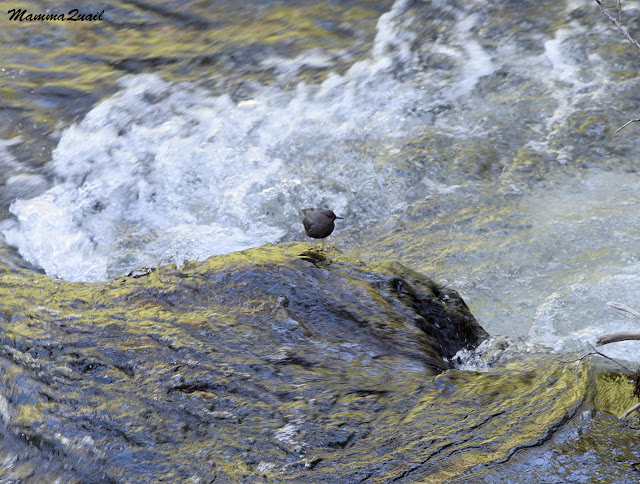 After the creek crossing the trail continues on the hillside slope. Little brooks were flowing downhill, crossing our path and muddying the trail. One of these brooks seemed to be flowing right to a pool next to a group of buildings down below. 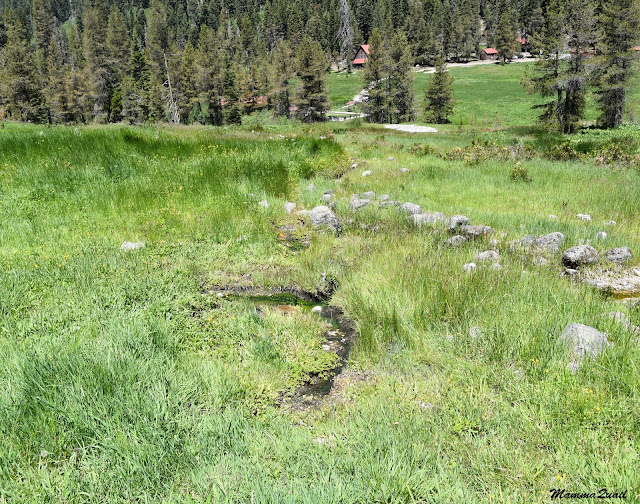 A close inspection of the water revealed why. It was hot! To hot to dip a finger in it for more than a second. This little brook was feeding the hot springs pool at the Drakesbad resort below. 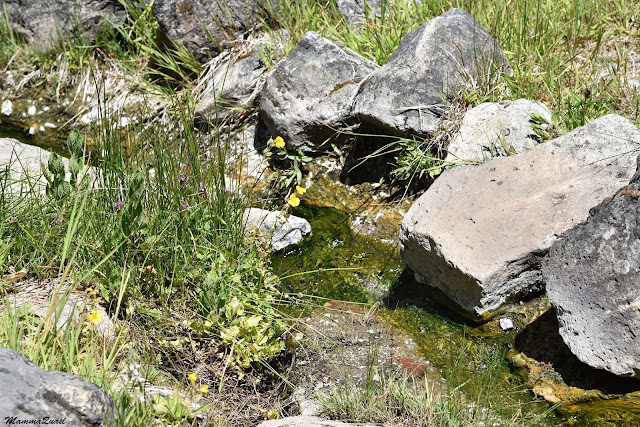 The plants growing right by the water were obviously tolerant of the heat. Yellow monkeyflowers were blooming there, some yarrow, and this selfheal plant, a relative of sage.
Along the trail there were many other wildflowers blooming, most of them very small.

I would have walked with my eyes on the ground if not having to see where I was going. The ground was covered with little wildflowers.
Not all flowers were miniature. The larkspur stood out both in height and in its brilliant blue color.
Our path lead us into the woods again. On the day I was there with the family group I held everyone behind me for a few long minutes while we all admired a fearless Tanager that was busy collecting nesting material right on the trail ahead of us. It was my elder chika that spotted (and identified) it and we all waited patiently until the pretty bird was done and flew off with a beak full of straw.
We arrived at another creek crossing. The water was visible only from the bridge because of all the lush willows that bent over the creek, creating a narrow, green tunnel.
On the other side the trail continues along the creek for a short distance. Then it meets the trail from the Drakesbad Resort in a weird T intersection. We turned left, in the direction of the Devil's Kitchen.
We were walking in a field of grasses and rushes but corn lilies were still present. Not in a huge pasture like before, but in pretty, round cushions. None were blooming yet.
Coming out of the last of the trees we were looking up a beautiful meadow, lush and green. The path was well hidden in the fresh growth, visible only when directly on it.
A mild smell of sulfur hang in the air. Somewhere ahead there were volcanic hot springs :-) 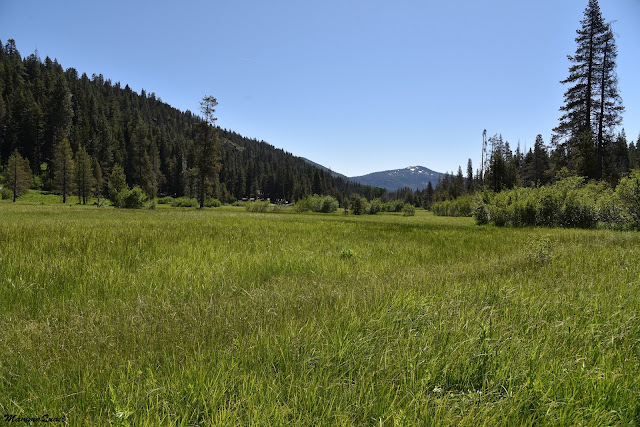 A small rivulet crossed our trail. This one had cold water flowing through. 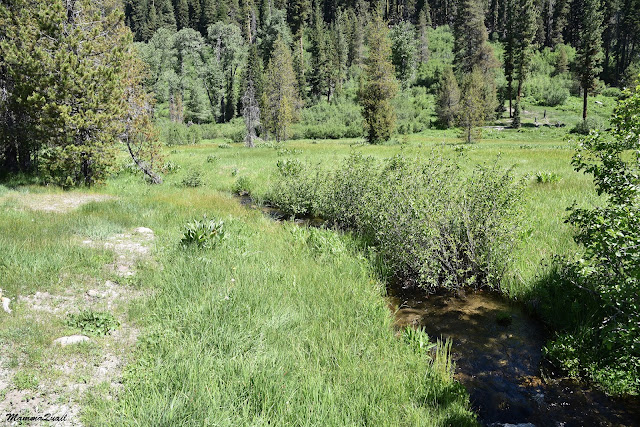 A moving contraption caught my eye: in the water, just off the bridge, was a handmade waterwheel. There was no indication of who put it there and why. I wondered if it was some sort of a boy scouts project left behind. 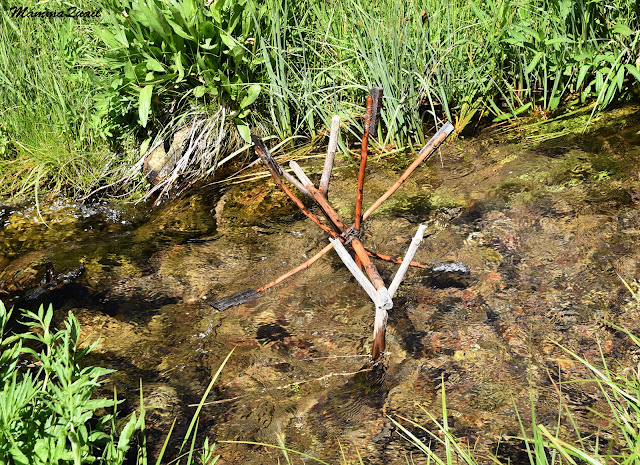 My thoughts didn't linger in the waterwheel for there were far more attractive things to look at near this brook, such as blooming bog orchids.
The meadow trail continued on, leading to the forest ahead. In parts the trail was a narrow boardwalk, protecting the wetland underneath and the hikers too, no doubt. 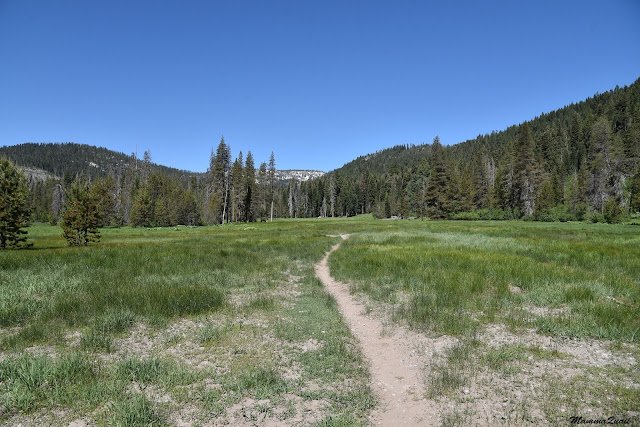 Our day turned quite warm so we welcomed getting back into the shade of the woods. We did, however, started ascending almost immediately. The slope was mild, but continuous. 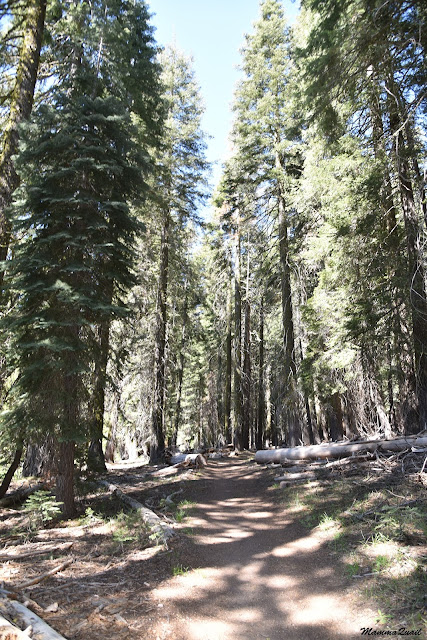 We walked uphill slowly, enjoying the shade and the fresh smell of the conifers forest. The trees weren't very crowded and there were quite a few wildflowers on the forest floor.
Some of these forest wildflowers I was really happy to see and took the time to crouch down and get a good close-up.
The red candle-like blossom of the snow plant dotted the forest floor with brilliant red. Not as numerous as I've seen in the northern region of the park, but very conspicuous nonetheless.
The chikas found a snow patch and that made them very happy. Of course we had to spend a few moments there for some snow play. 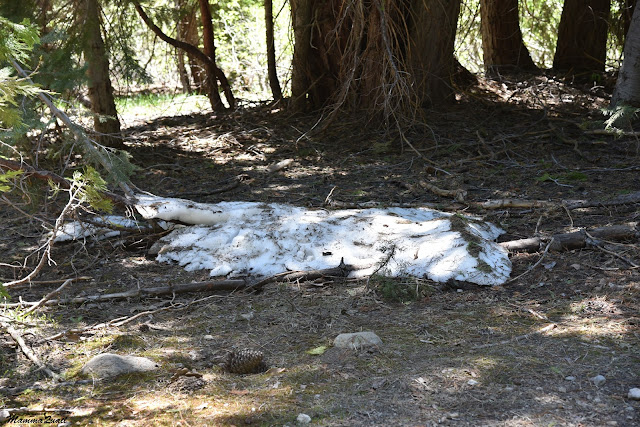 As we were going up the smell of sulfur strengthened. Then the slope became a steeper uphill, and just as the chikas were asking for another break we reached the top. From there it was a steep drop into Devil's Kitchen. 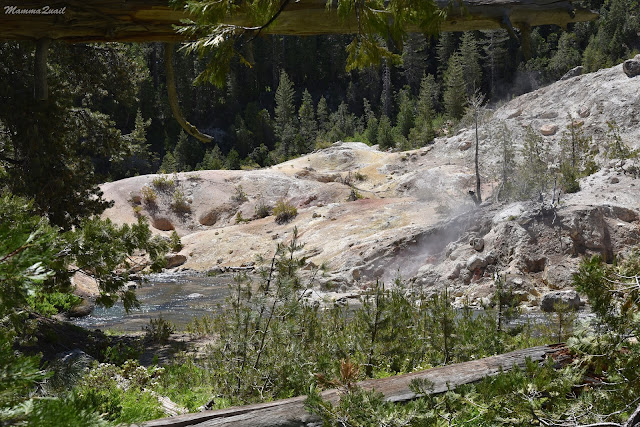 Devil's Kitchen is an active volcanic springs area, one of five within the park. The first time I've seen it was from far above, during my hike to Kings Creek Falls and Sifford Lake, a year before. Now I was seeing it up close. It isn't as big as Bumpass Hell but it's certainly very active, and it is very beautiful. 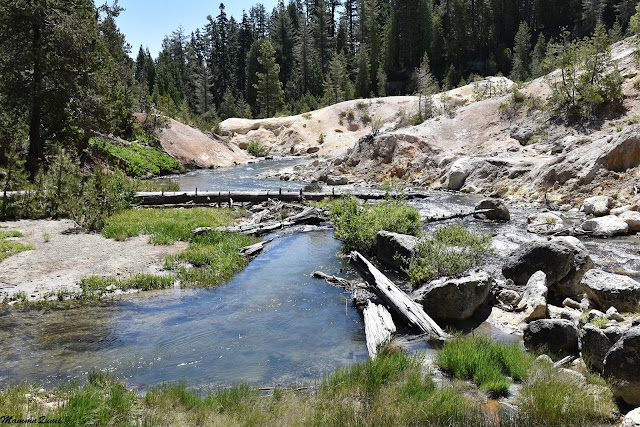 The Hot Springs Creek runs through Devil's Kitchen, collecting the heat and the minerals and waters the vegetation. The gasses that seep from the volcanic ground into the sallow water at the edge of the creek, giving it a pretty fizz.
Devil's Kitchen is at a much lower elevation than Bumpass Hell, and it is covered with lush vegetation. And much of it was blooming when we were there.
The smell of sulfur became heavy, even choking at times. The exposed ground surrounding the bobbing holes was colorful with minerals and thermophilic bacteria. 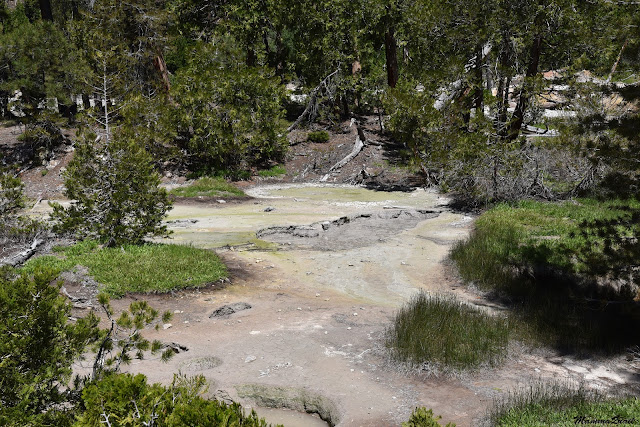 We strolled around the small loop trail that meanders between the volcanic features, inhaling the odors and swallowing the sights. 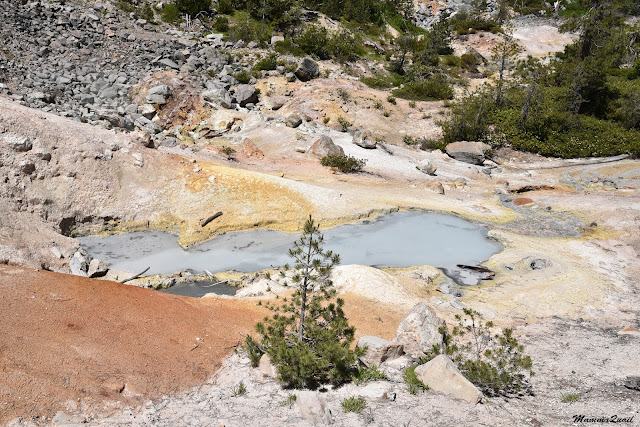 And then we had to walk right through the clouds of smelly steam. Quite an experience it was. I think the smell clung to my shirt for quite a while after that. 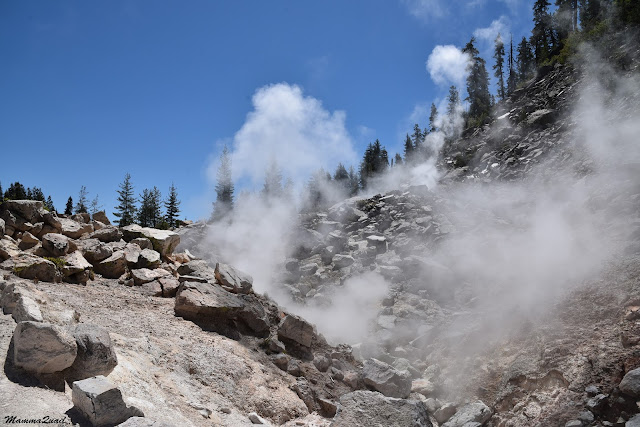 We completed the loop through the Devil's Kitchen and climbed back up to the forest. After a short break we started back down the trail.
Getting out of Devil's Kitchen I told my companions that "it's all downhill from hear". But it wasn't accurate because we still had to cross that flat meadow on our way back. That gave me another chance to appreciate also the less assuming but way more prolific flowers of that meadow. 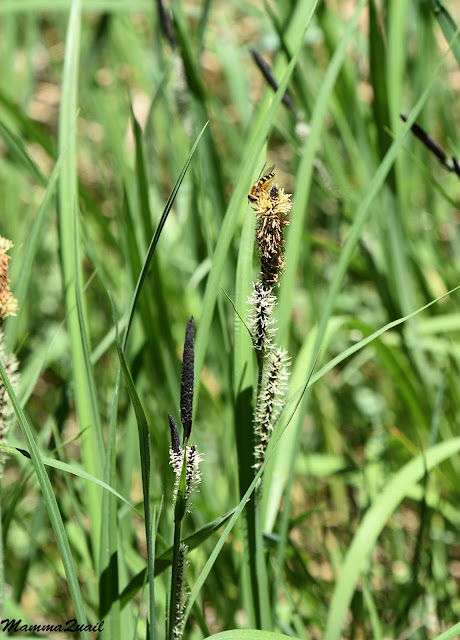 July 23, 2017
Last summer, a year and a month after our first visit to Devil's Kitchen I came there once again with a family hiking group. Our original plan was to hike to Bumpass Hell, but the heavy winter snowfall had left the trail buried and closed even as late as the end of July. Not to miss the geothermal feature of the park we drove to Warner Valley and hiked once again to Devil's Kitchen.
Located at a lower elevation, there was no sign of any leftover snow on our way. The tail was pretty much the same as I described above - no big changes there, except for that the waterwheel contraption was no longer in the creek.
The wildflowers, however, were different. Only a month later into the hot season (and it was very hot!) and what I've seen blooming was completely different.
The change throughout the season isn't surprising, but it was quite a sharp change for only one month. It was on a different year though, and after a different amount of precipitation. 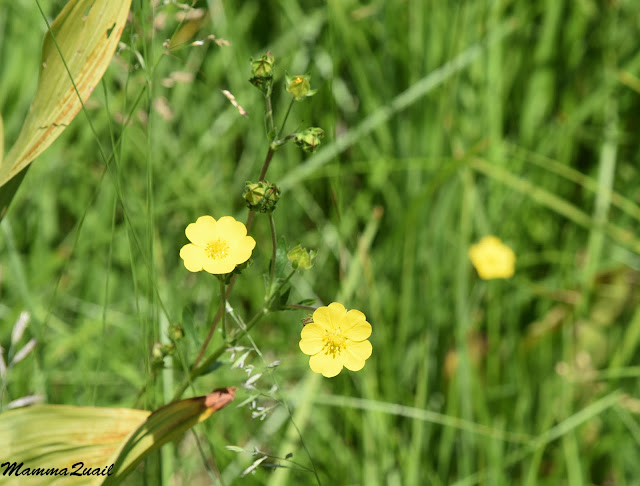 The new wildflowers were mostly in the meadow area where I've seen also some plants that were completely new to me.
Many were familiar though, but now in their peak bloom time.

And others, even though not new, still not a common sighting for me. This cute flower I've seen last only two weeks before at the South Warner Wilderness up in the Modoc Country.
The color combination was very much the same, only with different players at the scene.
And there were butterflies - many butterflies. Must have been caterpillars still in June because I don't remember seeing any on my visit here on 2016. 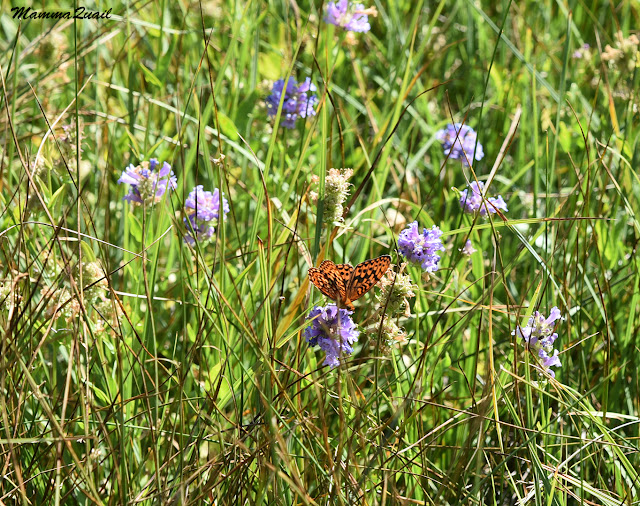 Another difference was the state of the grassy meadow. It was already drying up. There was still a lot of green around, but it was already mature green. And a green that's interrupted with patches of other bloom colors. 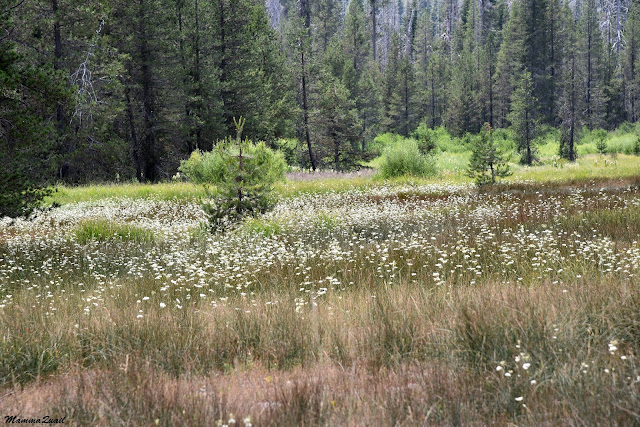 Another difference was the forest. The trees were there of course (although that's not trivial, considering how many forest fires have been raging throughout California during the past year). The forest floor, however, was brown, empty of bloom. All the forest floor wildflowers were already done for the season.
The Devil's Kitchen had not changed and was as beautiful and as odorous as last year. We hiked the loop and once again appreciated the sights and smells. I noticed that the Rhododendron was no longer blooming. It, too, was done.
On our way back my chika noticed something slithering on the trail. I manages to get there fast enough to capture its image - a garter snake - before it vanished in the grass. 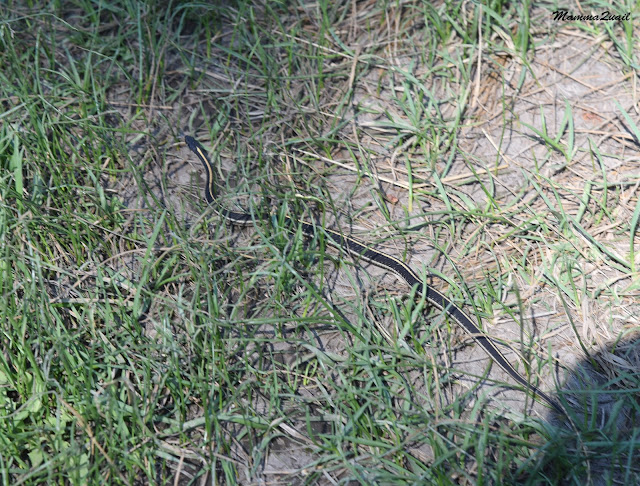 Our way back was quick - it was our last day of the trip there, and everyone was eager to get out and go home. Just before the creek crossing I turned around and looked behind me with longing. I wasn't eager to leave but I also couldn't stay - the chika's schedule dominated mine and they were due in the 4-H camp by the end of the week. 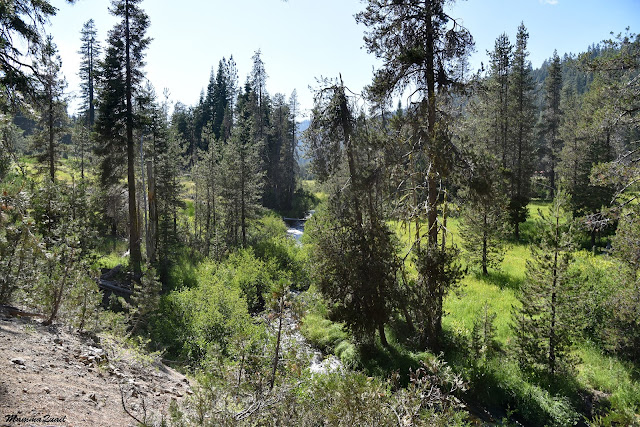 I'll be back in Lassen next summer, but whether I'll visit Devil's Kitchen again remains to be seen. It's really up to the elements. I won't be disappointed to, that's for sure.