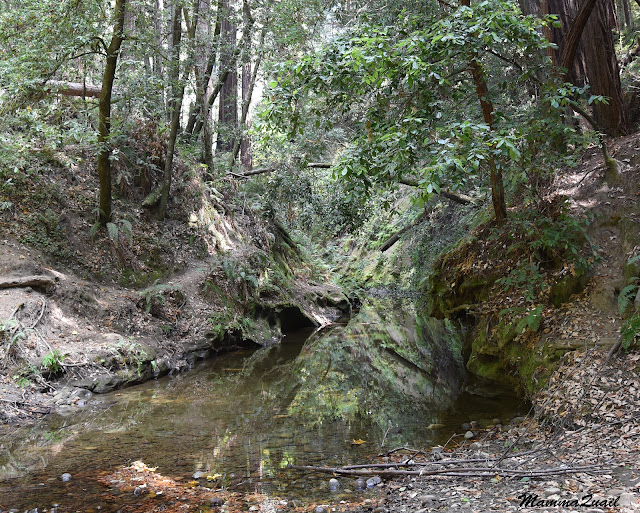 I was looking for new places to take my family hiking group to early fall. Considering the heat wave we California was going through at the time I was left with one of two options: the ocean coast or the redwood forest. Naturally I was drawn to the Santa Cruz area that features both fantastic beaches and some marvelous forests. It didn't take a long time to select a destination. I called a couple of my friends and together we went to The Forest of Nisene Marks State Park to explore.
My first hike there was a very beautiful one, but too challenging for a group of families with small children. So a few days later I was there again, this time with my own family, to hike one of the lower loops close to the park's entrance. We hiked a loop trail that combined sections of the Old Growth Loop, the Live Oak Loop, and the Terrace Loop trails, and we hiked it clockwise. A day before the planned group hike I snuck back to the park and did a solo hike of the same trail, counterclockwise. Most of the photos I share here are from those two hikes, with a few additions from the group hikes of the following week.

Finding parking on nice weekends can be challenging there. On Labor Day weekend the place was jam-packed. We got there early enough to sneak unto the last legal spot and by the time we gathered all our things and were ready to hit the trail there was a long line of cars parked in little pull outs along the road and many more waiting at the gate.


I took a moment to decide which loop to start on, but not before long, we were on the trail. 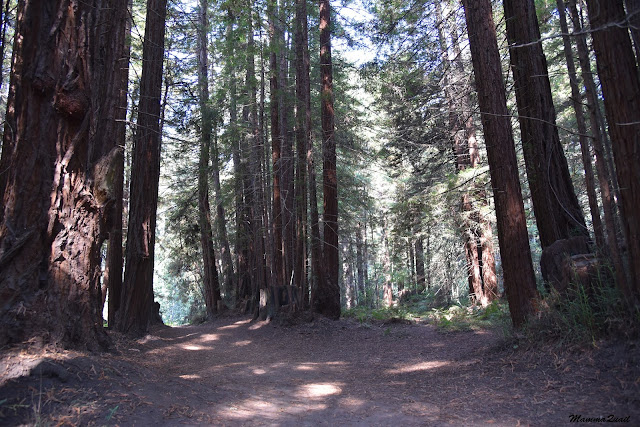 We didn't get very far before our first stop: the elder chika found some ripe blackberries. Naturally, we all stopped for a snack and got our fingers stained with berry juice and blood. 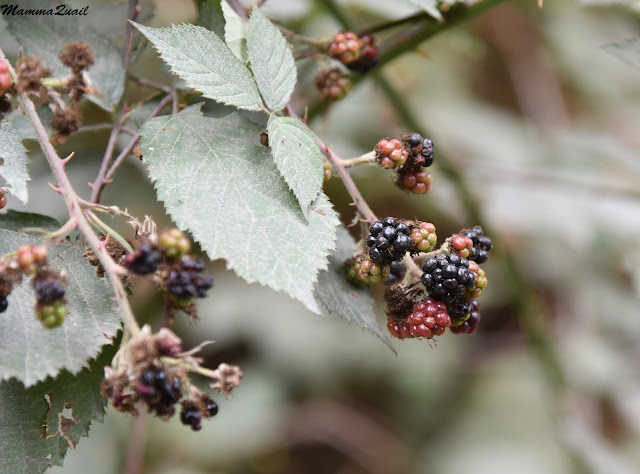 As surprised as I was to see blackberries so late in season, I was even more surprised to see some still blooming. I guess there will be fruit even later this fall. 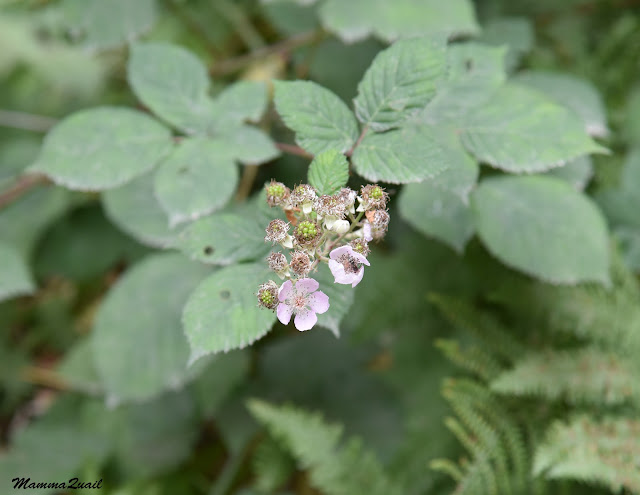 I didn't expect to see much bloom if any. But I did see a few redwood sorrel flowers, almost completely hidden in the foliage.
Our path took us across Aptos Creek. A narrow wooden bridge transversed the water and almost underneath it was a 'dam' of rocks and driftwood. Upstream the dam the water flow was slow, almost unnoticeable. The water surface was very calm, mirroring perfectly the canyon image.
It was tempting to sit near the water and we did stay there for some time, but before long I prompted my family along, reminding the chikas of our plans to go to the beach after the hike. On my subsequent hikes there with the family hiking groups we hiked the loop in the opposite direction and so finished the hike at this lovely spot, allowing plenty f time to hang out and have fun there.
I had one more reason to lead my groups clockwise on the following hikes: the trail west of the creek is quite steep for s good distance and I assumed most people would find it easier to walk it downhill rather than uphill as I did with my family.
The slope west of Aptos Creek was a sad sight: a huge area was almost completely taken over by English Ivy: an extremely aggressive invasive plant. Once taking root, this plat cannot be eradicated, It flourishes in the Bay Area, covering large areas and choking the local vegetation, including tall trees upon which it climbs. I've seen this at Mt. Tamalpais and Henry Cowell Redwoods State Parks, and now here. I recently learned of a plan to make biological warfare on the ivy, and my feelings are mixed because it involves releasing another foreign species - an insect that's supposed to feed specifically on the English Ivy. It's a good thought, but what if the bug mutates to broaden its palate to  native species?
Near the slope's apex there was a side trail leading to the Advocate Tree - a 1000 years old redwood that was spared when the forest was logged 150 years ago. I went down that trail and my family followed.
I was saddened to see the this majestic tree on the ground. A card with the tree's historic timeline was attached to the tree roots. On the card it said that the tree collapsed during last winter.
After a few minur\tes I noticed the fresh redwood growth that was sprouting from the fallen tree trunk in several places. The Advocate Tree was downed, but not dead! Not yet, anyway. I am amazed at the resilience of this species. These trees are truly awesome.
We returned to the main trail and continued uphill. My elder chika found a strawberry and after getting my approval she ate it. This is an exotic strawberry species, one that is used in gardening and now escaped to the wild.
They found a banana slug too. A bit surprising, considering how hot and dry the day was.
A redwood forest isn't the ideal place to look for fall colors but nonetheless they are apparent to those who look for them. And I did look for fall colors. None better wearing fall reds than the good old poison oak.
Meanwhile Pappa Quail found a butterfly and managed to capture a nice photo when the critter paused its flight for a second. 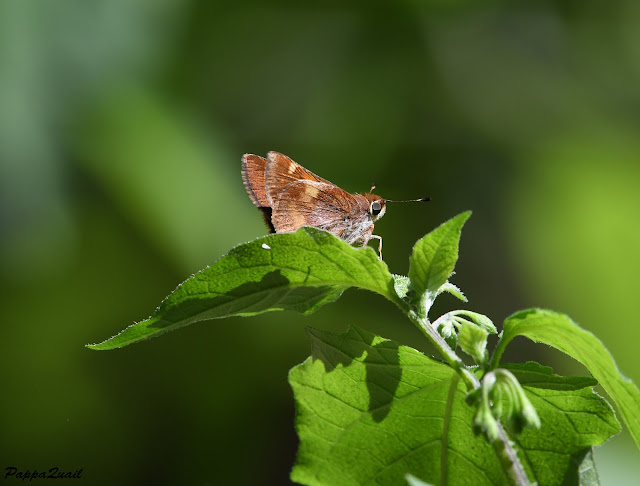 He also got a nice capture of the California Sister that the chikas had sighted further up the trail.
Up on the hill the trail leveled and then started down in a mild slope. We were walking among tall and thin redwoods, young fairy rings that sprouted from the base of the logged old tree that was there before. All these thin redwoods are the young scions of the old growth ancient trees that are now beams and walls of houses in San Francisco and other area towns. 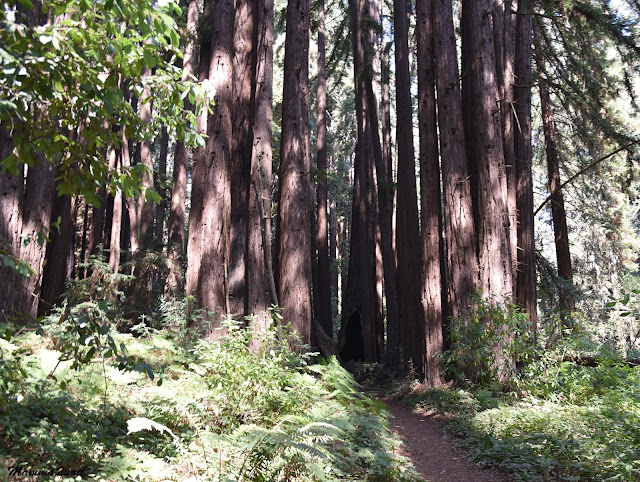 Young as they are, these redwoods are immensely tall. Given time and the right conditions they will become even taller, and as massive as their progenitors.
We could hear many birds in the canopy, but those we saw on the ground and in the undergrowth were the common dark-eyed juncos. They were looking for seeds.
We kept descending and eventually arrived at the Vienna Woods Trail. There we turned back south, parallel to the Aptos Creek.
While the creek was flowing still, the forest itself was dry, ready to receive the expected rains. There were spiderwebs everywhere, of every kind. We weren't the first people on that trail so we didn't have to walk through the cobwebs. 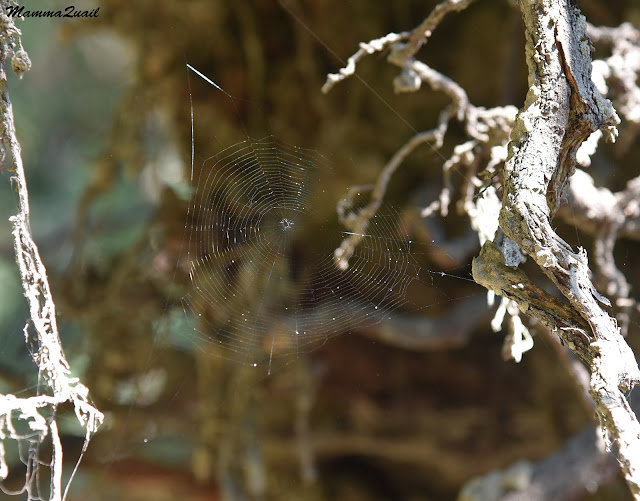 Everywhere around us were the stumps of the loved old trees, with or without the new stump-sprouted young redwoods. On on of those stumps I was surprised to see growing a completely different tree - a tan oak, as if grafted onto the redwood stump. 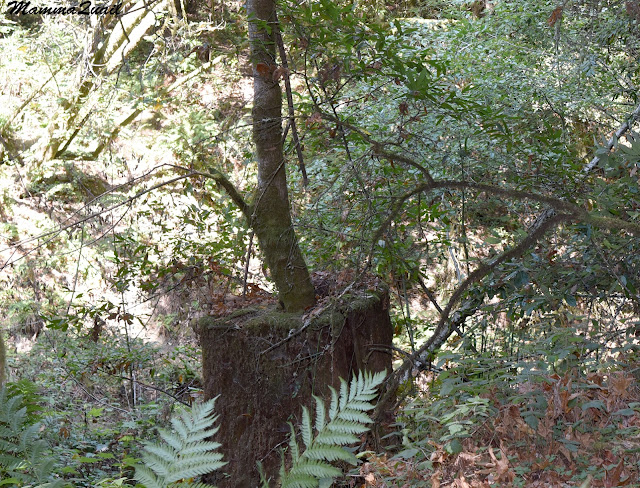 Still high above the creek we found a beautiful view point on the canyon and the flowing water. A thin rope was hanging from a tree limb high over the creek and I wondered at what point did people feel inclined to swing over the stream. 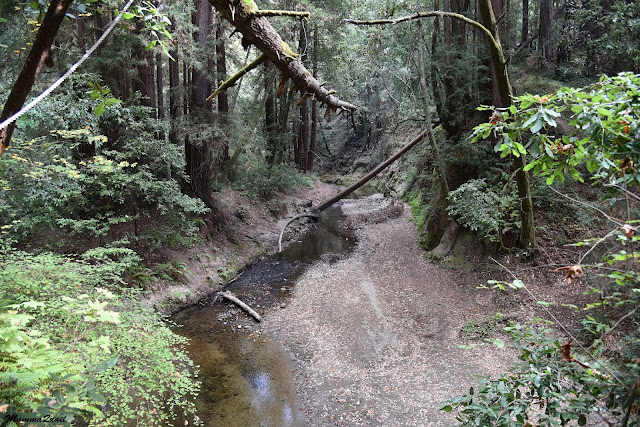 The creek of course, had been flowing much higher and stronger not very long ago. As we made our way down to the valley floor we could tell by the wash signs and the huge pile of driftwood just how high the flow was last winter, even without considering the pole that was stuck in the sand as a marker.
there too was a rope hanging over the sand. It was over the water at some point, that's for sure. 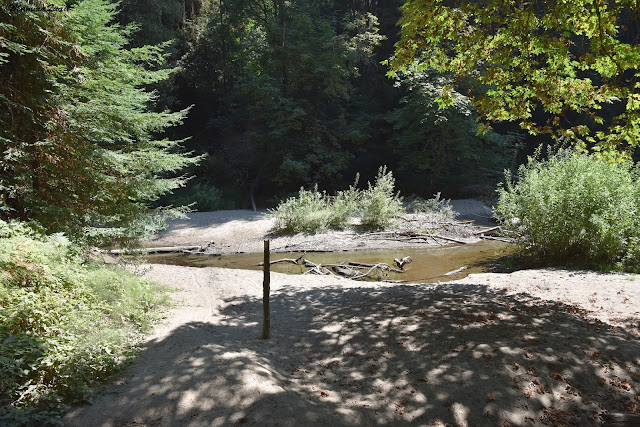 I don't think I'd have risked myself going into the water while the current was strong enough to carry theses logs. 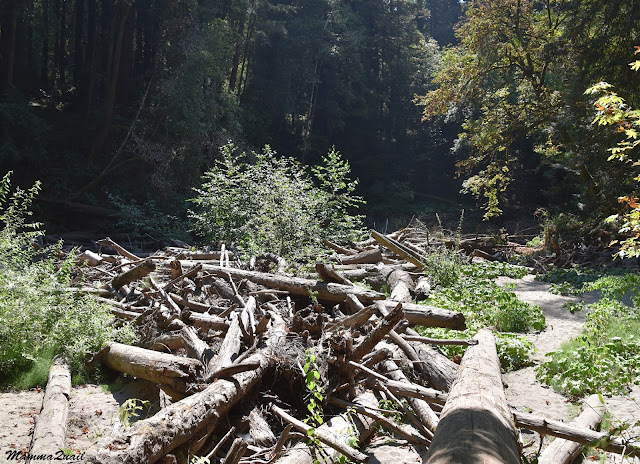 We arrived at the second crossing of Aptos Creek and found that there was no bridge there. The creek was shallow now, and the current week. Pappa Quail and the elder chika balanced on the rocks while me and the younger chika took our shoes off and waded across. The water was cold, very refreshing in the heat of the day. On my subsequent hikes I brought my hiking poles along and used them to balance on the rocks as well.
We connected with the Aptos Creek Fire Road and continued south toward the entrance station where we were parked. On our way we came across a nice observation deck. I had not realized how much height we had gained over the creek in such a short distance. But come to think of it, it is probably the creek that had dropped its altitude.
By the time we had made it back to the car the day had turned sweltering hot. From there we drove to Natural Bridges State Beach and topped our day in the wonderful tide pools there and refreshed ourselves in the cold Pacific Ocean water. 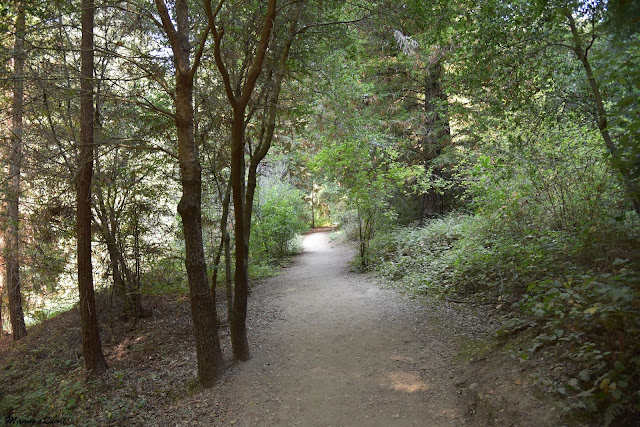 On my solo hike a few days laterI took the time to look around a bit more and I found more ripe blackberries to snack on.
I also found more lovely fall colors. We're definitely ready for the rain here.