Happy Camp: A Town with A Trail

The forecast of a chilly night that we got from the backpacker we've met on the Woolly Creek trail came to be. We found a nice campsite on the Klamath river bank just south of Happy Camp. We arrived there with plenty of daylight left to set up camp, cook dinner, and get a campfire going for a little but before the wind and the evening chill drove us into the tent.
In the morning everything was sunny and bright again. Between breakfast and breaking camp I managed to look around a bit and snap some photos of the area.
Our first stop was at the Klamath National Forest ranger station at Happy Camp, which is the central town along route 96. As we pulled into the small parking lot we saw the usual red-lined limited parking signs. But no ... on a second look they turned out to be very unusual  parking signs. 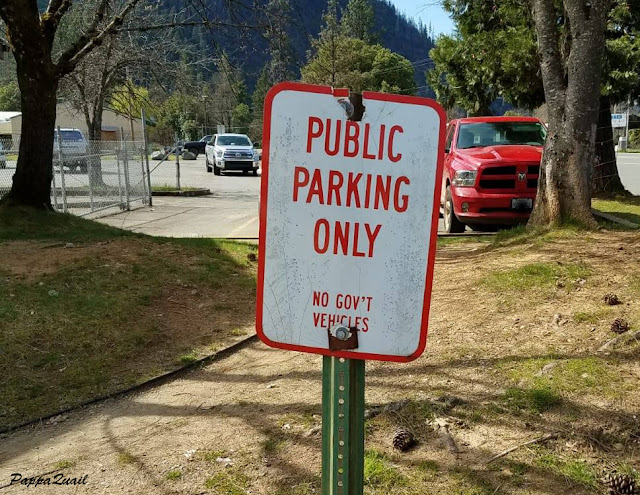 We went into the rangers station to get information about the local trails. I was specifically interested in the Grinder Creek trail, which is part of the Pacific Crest Trail (PCT). The ranger at the dest was very sweet. She was a native of Happy Camp and very happy to have lived there her entire life. Just like the ranger I've talked with on the phone before the trip, she too discouraged us from going on the PCT in that area and kept redirecting us to a small local trail named simply, "Town Trail". It is a short trail - only a mile one way, and it isn't a loop. It goes uphill to a pretty view point above the town.


It wasn't quite the kind of hike I had planned for the day but the ranger was very persuasive and so we fount the trailhead and started uphill.

Almost immediately I saw a wildflower of a species I was not familiar with. It was growing in a way that made it difficult t photograph and by the time I was done with my efforts I had one decent image and my family was already way up the hill.

They stopped and waited for me near a cute patch of shooting star flowers, making sure I wouldn't miss it.
We were ascending continuously through the forest. A one point however, the trees opened up and we could see the river way down below. Almost without noticing we have gained considerable altitude.
Looking down more closely reveals the tiny green moss and lichen covering the rocks. These ancient plants had their spring as well with little fruiting bodies extended above the green mat. 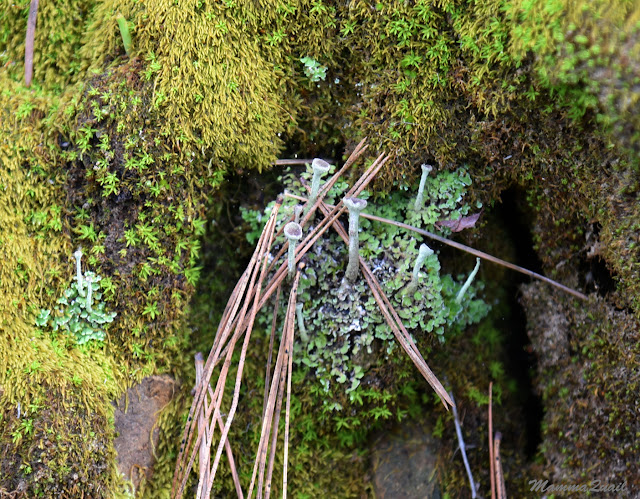 The trail curved to the north and looking east in between the trees I saw a snowy peak, possibly the same peak we've seen the day before from the  hike on Woolly Creek Trail. 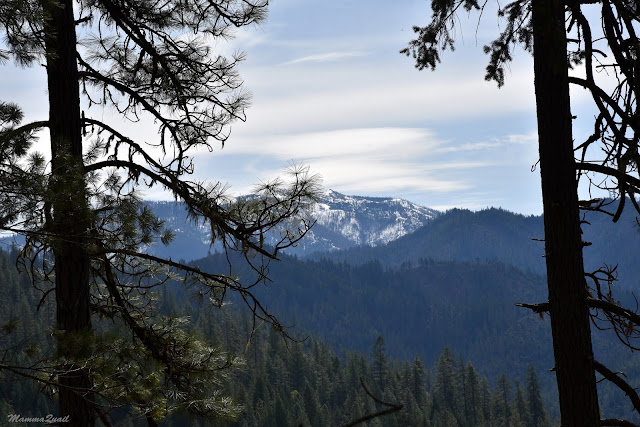 The Klamath area experienced many wildfires in recent years, including the forest above Happy Camp through which we were hiking. As we ascended higher the fire scars became wider and stronger. The tree trunks were all black and many were dead. I did find one pine tree that survived, alone of all the trees in its vicinity. The bark that did not burn completely - that's where the living tree survived. 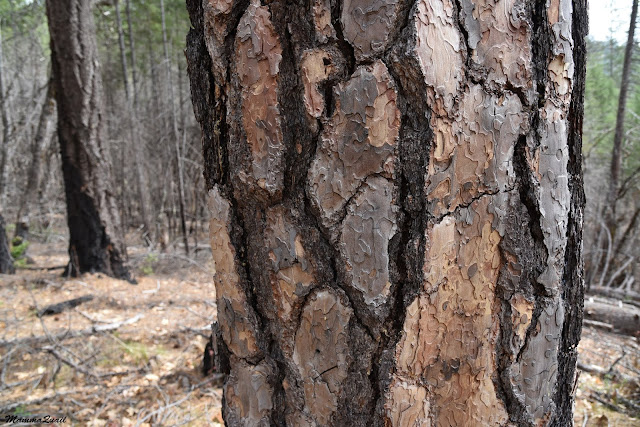 Pine forests have evolved to endure forest fires. Clearing forest patches of the old trees make room for the new ones.
The trees there are amazingly resilient. The scars of the fire were everywhere around us, but so was the force of recovery.
The madrone was probably the most noticeable tree species we've seen on this trip. Its relative, the manzanita bush, was dominant in the post-fire area that was once tree-shaded.
Woodpecker knocks sounded from the burned trees. Pappa Quail and the elder chika found its source: a downy woodpecker.
At the top of the mountain the trail turned sharply and we reached its end at a nice vista point with a picnic table and a spectacular view down to the river and the city. There we also met another family with two little boys, and an older couple that came up with no children but with a case of beer. We had a nice chat with them and they told us that they moved to Happy Camp to get away from the crowds of more populated area. They loved the solitude and the relative silence. I could totally relate to that.
We sat there for nearly half an hour, but eventually the chikas got bored and we remembered that there was another hike that we wanted to do that day - we had not given up on hiking Grinder Creek. And so we said goodbye to the others and started back down.

Going back through the burnt forest my birdwatchers found a hermit thrush sitting atop a charred log.  The birds make do and some even do better in this environment.
Down, down, down we went. Much faster now, for gravity was on our side and also I didn't feel the need to stop and photograph the same things I have seen going up. 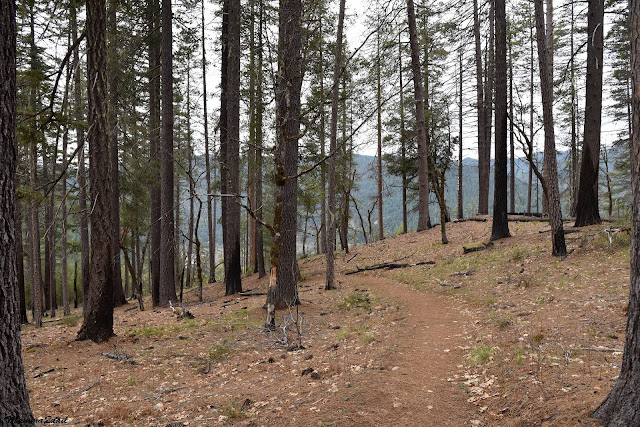 I did make an exception of the blooming gooseberry bush that I had skipped on my way up. The season was nearly over for it but it was still red and beautiful.
But the best red in that forest and the most outstanding color of that hike belonged without a doubt to the Pacific Madrone and its lovely, smooth bark.

We reached our car below in record speed, then drove back into town to get some lunch and move on to our second destination of that day - Grinder Creek at Seiad Valley.