In the Regenerating Kingdom of Trees: Hiking at El Corte de Madera Preserve

A new school year has begun and with it a new hiking season for our Redwood 4-H Hiking Project. My selection for the season opener was a park that I've never hiked before - El Corte de Madera Preserve west of Redwood City. I went there for a prep hike with a friend but sadly I forgot to take my camera along. I did bring it for the 4H hike and snapped a few shots whenever I had the chance to divert my attention from the project members for a moment.
Pappa Quail came along too. He an the elder chika soon found an attraction - a Red Admiral butterfly clinging to a tree.
Shortly after they found the only bird that cooperated with the camera - a brown creeper. All the other birds we saw on the hike hid away quickly, leaving us to enjoy their songs only.
We started at the middle parking area which is merely a large pullout off Skyline Blvd. and started on the Sierra Morena Trail which follows the road for about half a mile before  turning onto Fir Trail.
It was a busy Saturday at that park. Every few minutes we had to squeeze ourselves to the side of the trail to allow bikers to pass by.
Less than half a mile into the Fir Trail we turned left and connected with the Manzanita Trail. We were already descending by now we were walking downward on a much steeper slope. The trail sure lived up to its name - we were walking through high chaparral of mostly manzanita bushes.
The terrain in that park is sandstone of special formation called, Tafoni. I read that on the map and trailhead sign. I could tell we were treading on sandstone but I have not the knowledge to tell that formation from any other. Still I mentioned that bit to the children. One can never tell what bits of information will stick in their minds.
Down, down, and down we went. We lost much altitude in a very short time. Another parent who went along wondered aloud about having to go all of that back up ... I merely smiled. If any of the children thought about that, they kept it to themselves.
The trail we did was nearly completely shaded. Whenever we were not walking in the high chaparral, we were in the forest. Whenever it was not manzanita, it was the madrone - it's relative. The madrone has a very thin bark. The new bark is green and photosynthetically active. It ages throughout the year and then it peels off to reveal the new green bark underneath.
We came upon a large patch of spiny fruit on the trail. I didn't know what plant it came from (I could only see manzanita around), and of course the project members asked me what it was ... they had to settle for, "I'll look it up and tell you later".
Back at home I uploaded the photo to the California Native Plants Society page, and within seconds I had the answer - that is the fruit of chinquapin plant, another chaparral bush that I simply didn't pay much attention to before.

We kept going on on the Manzanita Trail. In places the manzanita boughs closed over us to form a tunnel.
In oter places the vegetation opened up and standing on our toes we could see the view to the southwest. We would have been able to see the ocean if not for the blanket of fog that covered it.
The Manzanita Trail loops around the hill side, making a sharp turn eastward. For a short distance we were walking on the south facing slope and enjoying full sunshine. Accordingly, the vegetation was much lower and less lush.
We connected with the Timberview trail and immediately plunged into dark forest. It could have been darker - this used to be old growth redwood forest, but it was heavily logged. The park's name (El Corte de Madera - tree cutting), indicates that past. All the trees there now are young growth, but the stumps of the old, venerable redwood trees that used to dominate the forest there are still there - silent evidence of the massive destruction of the old California forest.
When we arrived at the Timberview trail a debate started among the youth project members. Some wished to turn right and extend our hike a bit more. Others wanted to turn left and head right away toward the trailhead. Because we've hiked a a very good pace so far (no surprise - we were going mostly downhill) I sided with the kids who wished to extend the hike and so we turned right all the way to Crosscut Trail. After an extension of 0.9 mile and one wrong turn which was corrected after some unnecessary sweat was perspired on an unnecessary upslope we turned back north on Timberview Trail and finally started our way uphill.
The forest was much denser and darker along Timberview Trail than we've seen earlier on the hike. The canyon was much deeper too but the creek was dry. We were hearing creaking sounds all around and I remembered that on my prep hike there with my friend I though I was hearing a tree breaking down above us and I made us run uphill a little bit because I feared that a tree might fall on us. Maybe I was exaggerating a bit but trees do collapse in the forest every now and then.
No we were going p and up. The slope of Timberview Trail didn't feel steeper than that of the Manzanita Trail upon which we came down. There were less level itervals, however, leaving the uphill walk continuous and without a break.
We did take it easy, though. stopping every now and then to look at things, like the waterhole in the creek that had a little water left in it still.
This part of the creek appeared to be recently eroded. A sign on the other side announced that 'This is not a trail," making me think that maybe once it actually was. I thing that this would be a nice little waterfall in winter, when the creek will be running. 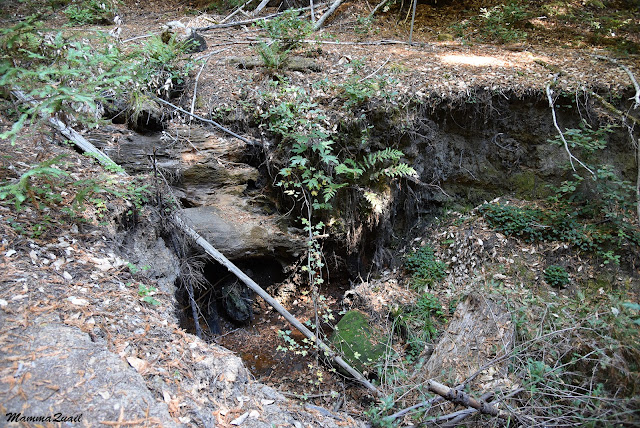 The hike uphill spread our group. The eager to finish kids made it uphill quickly. perhaps the others were just as eager but didn't wish to spend up. I found myself at the rear, helping my young chika along - she had a blister forming on her heel and was hurting with each step. She was one of the kids who wanted to extend the hike and now she moped about that choice. I supported her the best I could,  which was mainly staying by her side and listening to her runts all the way up. I consoled myself with the sight of a perfect, lush fern by the trailside. 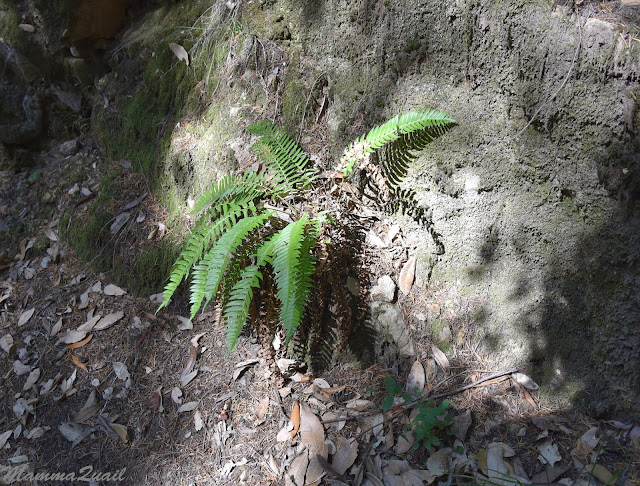 When we finished the hike we decided to meet together at a restaurant in Redwood City for lunch. Pappa Quail treated the chika's blister and taking a long goodby look at the forest we said goodby and drove off.
El Corte de Madera park has a complex trail system and we had sampled only a little but of it. There is much more to explore in that park and I hope to get back there soon. Perhaps after the rains begin and the banana slugs come out.

Many thanks to members of the California Native Plants Society for their help in identifying plants!
Thank you Anenet for identifying the butterfly!